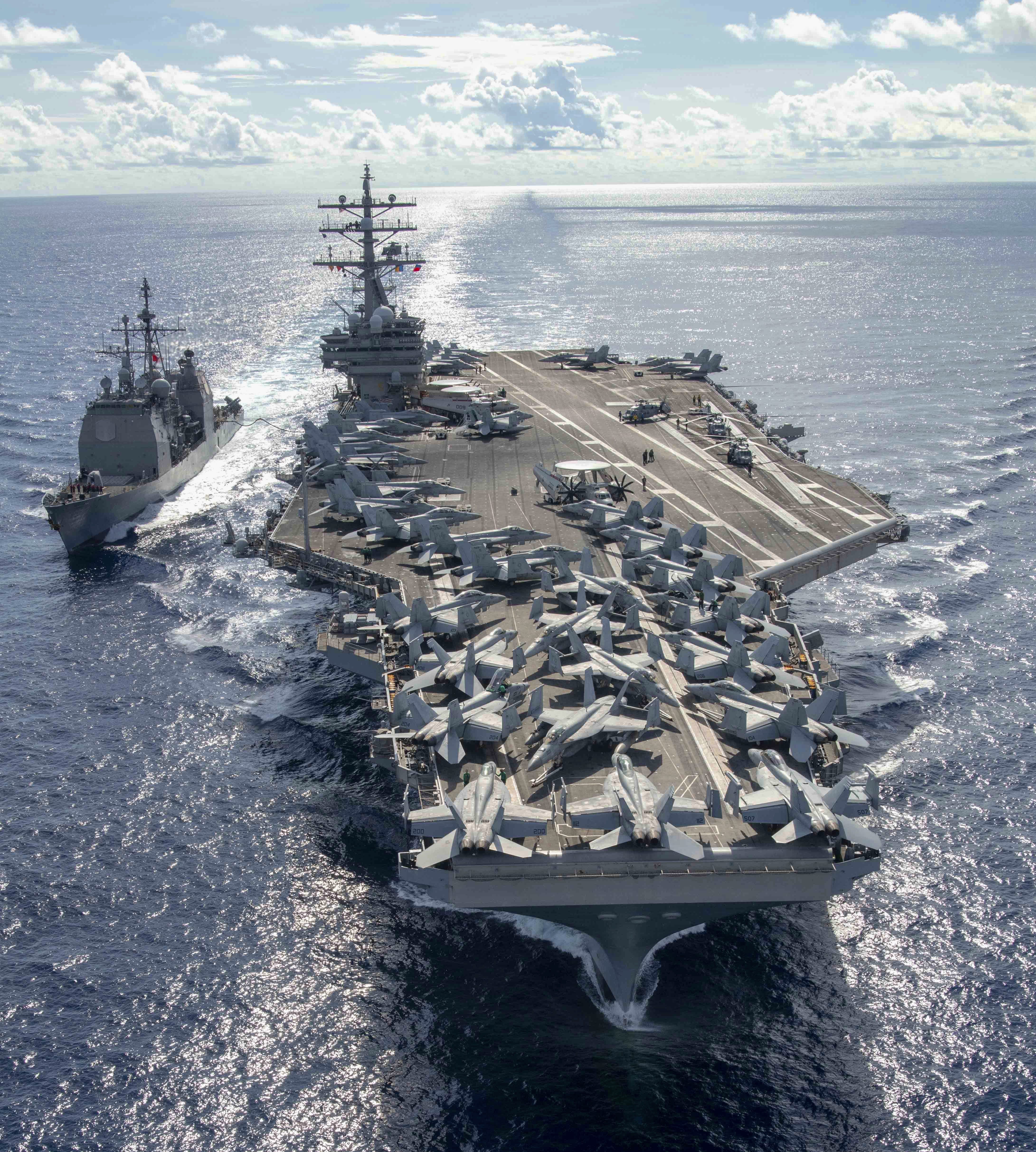 Acting Secretary of the Navy Thomas Modly has made a bold call: the Navy should reach a fleet of 355 ships – both manned and unmanned – within a decade.

Service leaders first settled on the idea of a 355-ship fleet in late 2016 but have since backed away from a hard number, saying it would be impossible to ever reach 355 battle force ships through new shipbuilding alone and would be a challenge to meet and sustain it even with extending the service lives of today’s destroyers and amphibious ships.

And yet, even as Navy leadership is more and more recognizing the likely limitations to its spending power today and in the coming years, Modly doubled down on 355 while also highlighting the importance of unmanned systems in his first priorities paper while leading the Department of the Navy.

Modly’s call to hit 355 suggests that the upcoming naval integrated force structure assessment will be in line with recent calls to rely more on small combatants and unmanned vessels to boost the Navy’s ability to influence more geography, as the global threat environment becomes more complex. For the first time, this FSA will look at unmanned vehicles as well as connectors and alternate platforms to move Marines into and around a theater, in addition to the Navy’s traditional warships and logistics ships that make up the battle force.

The Navy and Marine Corps are still wargaming their naval integrated force structure assessment, which was previously due out by the end of this month. USNI News understands that document won’t be released until January now, as an intensive wargaming and modeling and simulation effort continues.

In his “SECNAV Vector 1” memo dated Dec. 6, Modly writes that one of his three broad priorities for the Navy and Marine Corps are “designing a future integrated naval force structure.” He then adds that one of his top five immediate objectives is to “establish an integrated plan to achieve a 355 (or more) ships, unmanned underwater vehicles (UUVs), and unmanned surface vehicles (USVs) for greater global naval power, within 10 years.” 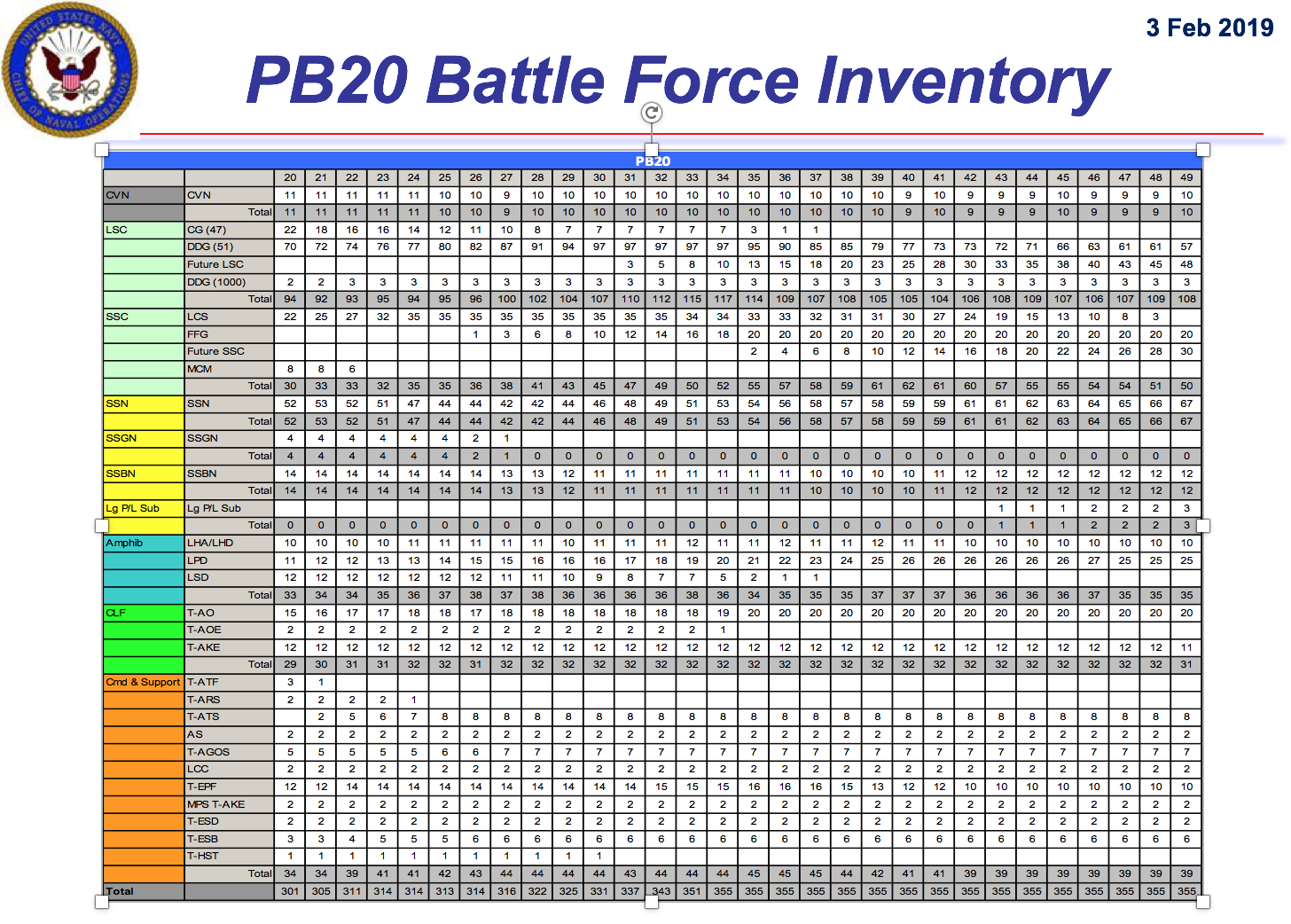 Without counting unmanned platforms as ships, reaching a fleet of 355 ships by 2030 isn’t realistic, uniformed leadership has acknowledged. Even under the Navy’s best-case scenario, extending the lives of many surface ships and continuing with its planned shipbuilding efforts would get the service to 355 by 2036 or 2037, though it wouldn’t be able to sustain that size for long.

However, with Modly’s call for the fleet of 355 to include both manned ships and unmanned vessels, the Navy is already on a good path to hit 355 in the next decade. 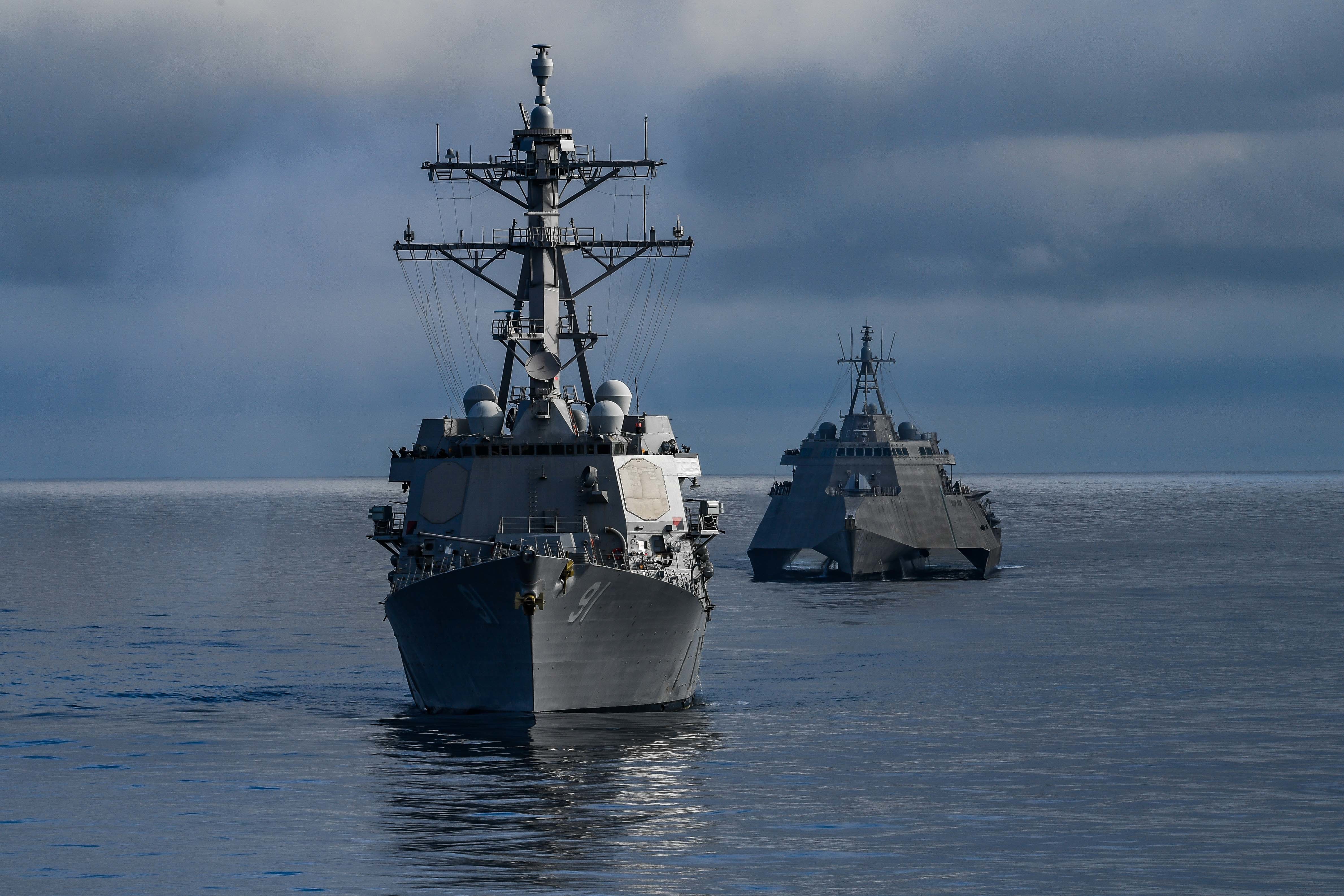 In Fiscal Year 2030, the Navy expects to have 331 battle force ships, according to its most recent long-range shipbuilding plan. By the end of FY 2024 – the end of the current Future Years Defense Program (FYDP), the period for which detailed budget projections exist – the service hopes to buy 10 Large Unmanned Surface Vessels and nine Extra Large Unmanned Undersea Vehicles. While many steps would have to occur before the Navy could consider UUVs and USVs “battle force ships,” if that happens at all, these two platforms would be the most likely candidates for inclusion. In fact, Navy budget documents already talk about “battle force ships” and “large unmanned surface vessels” side-by-side, perhaps hinting at a future equivalency, and the memo announcing the naval integrated FSA specifically calls out LUSV and XLUUV by name.

The 331 ships in FY 2030, plus the 10 LUSVs and the nine XLUUVs to be purchased in the next five years and delivered before that 2030 timeline, would put the Navy at 350. A simple continuation of LUSV and XLUUV procurement beyond the FYDP would put the Navy over 355.

Additionally, the Navy’s most recent budget request shows plans to buy three Large Diameter UUVs – which are being talked about more as a payload to accompany attack submarines, rather than a warfighting platform in and of themselves, but they would certainly contribute to Navy domain awareness and lethality across the globe. The service in the FYDP will also buy two prototypes of its Medium USV, with acquisition plans for the MUSV still yet to be determined. MUSV is meant to be an intelligence, surveillance and reconnaissance (ISR) platform to support carrier strike groups and other naval assets at sea.

Including LDUUV and MUSV in the count would certainly put the Navy over 355 manned ships and unmanned vessels within a decade. On top of that, budget documents show plans for at least 44 small and medium UUVs and 135 Mk-18 mine countermeasures UUVs in the FYDP alone.

Further, there exists some opportunity to accelerate manned warship acquisition, though hurdles exist. Budgets are expected to be tight in the coming years, with expectations of flat or declining defense spending overall. The upcoming procurement of the Columbia-class ballistic missile program expected to consume nearly 40 percent of the annual shipbuilding budget, the chief of naval operations said last week. Still, the Navy is kicking off the design and procurement of its guided-missile frigate (FFG(X)) program this fiscal year, with a lower price tag than most other warships. Though the Navy will start out with a single shipbuilder working the frigate program, the idea has been floated to award ships to a second yard if the Navy wanted to accelerate its plans to increase its use of small combatants rather than continue its outsized use of larger combatants.

The semantics of the Navy’s 355-ship fleet have been a challenge since the December 2016 publication of a force structure assessment that recommended that number. The 355-ship figure has been acknowledged by Navy leadership to apply to battle force ships, which include all warships and many logistics ships that contribute directly to combat – but not unmanned platforms.

Former Chief of Naval Operations Adm. John Richardson was asked many times during his tenure as CNO whether UUVs and USVs would eventually count as battle force ships. He repeatedly stated the Navy wasn’t ready to make that determination yet.

As part of Richardson’s last round of budget requests, the FY 2020 long-range shipbuilding plan states, “Unmanned and optionally-manned system are not accounted for in the overall battle force as defined by the Secretary of the Navy on behalf of Congress. The physical challenges of extended operations at sea across the spectrum of competition and conflict, the concepts of operations for these platforms, and the policy challenges associated with employing deadly force from autonomous vehicles must be well understood prior to replacing accountable battle force ships.”

But as the service has begun experimenting with a medium and a large USV acquired by the Pentagon, ahead of its own procurement of an MUSV and LUSV program of record, confidence in the utility of USVs in a future fight has skyrocketed. By 2022, the service has noted, the Surface Development Squadron 1 (SURFDEVRON) in San Diego, Calif., will have two LUSVs and two MUSVs to use to hammer out concepts, manning and support, maintenance and logistics and other issues.

Under water too, as the Navy has moved out quickly on its LDUUV and XLUUV, there has been increasing talk of how to use UUVs, how to connect them to the tactical network, how to ensure future attack submarines and large payload submarines can launch and interact with UUVs, and so on. One UUV squadron already exists and a second will be stood up to further Navy knowledge on how to operate and support these vessels alongside the manned ships in the fleet.

Ultimately, it is likely that lawmakers will have a say in whether unmanned platforms are ever considered battle force ships. But Modly made clear in his memo that he sees them as part of the future fleet’s ability to monitor vast oceans, project power, put effects on targets and more.

The day before releasing SECNAV Vectors 1, Modly said at the U.S. Naval Institute’s Defense Forum Washington that the Navy had 275 ships when he was sworn in as under secretary two years ago and has 290 today.

“The trajectory to 355 – and 355 is stated as national policy in the defense authorization bill, and it was also the president’s goal during the election – we have a goal of 355, we don’t have a plan for 355. And we need to get a plan. Or if it’s not 355, what’s it going to be, what’s it going to look like?” he said.
“Everything was based around the 2016 Force Structure Assessment, which said that we needed basically 12 carriers, 104 large surface combatants, 52 smalls, and everything derivative from that. I’m not sure that’s the right force mix anymore. And we need to look at that, and that’s what we’re doing, and that’s part of what the commandant and the [chief of naval operations] are looking at. How do we look at an integrated force mix? What does that mean? How different is it? How does unmanned play into this? What do unmanned systems do for that?”