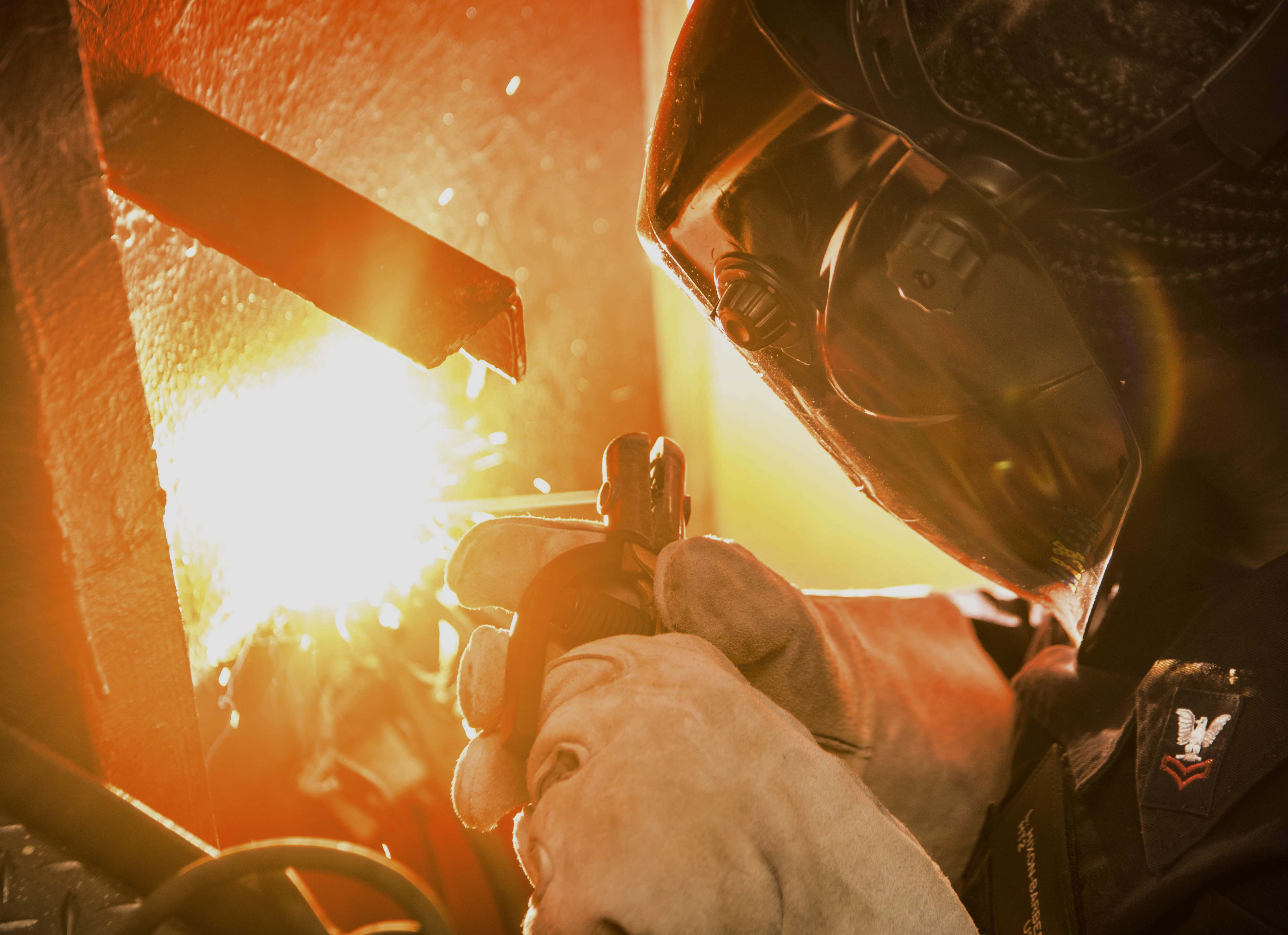 CAPITOL HILL – The Navy is still working to reduce its ship maintenance backlog, but a number of small improvements at its four public shipyards and innovative applications of new technologies and processes are moving the needle in the right direction, top leaders say.

The Navy in 2018 created a Shipyard Infrastructure Optimization Plan (SIOP) that would redesign the four public yards with new layouts and equipment to support more efficient operations and greater throughput. As of August 2019, the ship maintenance community kicked off a Naval Sustainment System-Shipyards initiative that mirrors a NSS-Aviation effort that brought in new processes and business practices to improve aircraft maintenance performance. And new technologies such as 3D imaging, hull crawling robots and cold sprays are savings weeks and months of time during availabilities while cutting down on cost as well as risk to personnel.

“It’s not perfect; we still have a ways to go,” Assistant Secretary of the Navy for Research, Development and Acquisition James Geurts told reporters after a Senate Armed Services Committee joint hearing by the readiness and seapower subcommittees.
“If you look at the performance we’re seeing in the last two years in particular, you’re starting to see … vectors are in the right way; now we’ve just got to scale it and make it repeatable across the entire enterprise. And as we look at on-time performance, we’re seeing all the trends are in the positive direction, but we’ve got a lot of hard work ahead of us, and that’s what we’re focused on, making sure we can execute.”

Vice Adm. Tom Moore, the commander of Naval Sea Systems Command, said after the hearing that, though the SIOP is a 20-year plan, the near-term goal for Navy ship maintenance remains on-time delivery of every single ship.

“I think we’re headed in that direction right now. Nine out of the last 10 carriers have delivered on time – [USS Dwight D. Eisenhower (CVN-69)] was the only outlier, and there’s a story there,” Moore said, referring to the second-oldest carrier in the fleet whose most recent maintenance availability stretched from six months to 19 months after the ship had been worked hard over the last decade.
“I think all these technologies complement the ongoing work to get better planning, to get the capacity up by adding people in the shipyards, and then get the workforce trained faster – and then I think you add these [technologies] on top of it, along with the stuff we’re doing on Naval Sustainment System to really look at it from a business process, and they all kind of form an ecosystem, they’re all integrated together.”

According to Moore and Geurts’ written testimony to the subcommittees, “To improve productivity, the Navy is testing innovative processes to reduce the time and cost of maintenance availabilities. New technologies such as cold spray and hull crawling robots have the potential to produce significant results. Cold spray is a technology in which metal powders are accelerated at high speeds and sprayed through a nozzle, impacting and mechanically bonding to a surface. This produces high performance coatings that can extend the life of legacy weapon and hull mechanical systems, and reduces the time to accomplish valve repair from 10 months at a vendor site to three days. Cold spray is currently in use at three of our naval shipyards and will be delivered to a fourth in FY 2020. Hull crawling robots are able to carry a variety of test equipment to conduct hull inspections, non-destructive testing and biofouling removal. This obviates the need for scaffolding or lifting equipment and is estimated to reduce dry docking periods by up to two weeks while improving worker safety. Hull crawlers have been ordered for each maintenance activity with an anticipated delivery of tooling suites in March 2020. The innovation project team at Portsmouth Naval Shipyard accomplished a complete 3D imagining of a submarine, USS Cheyenne (SSN-773). This 3D imaging will be used to plan and execute maintenance, reducing cost and schedule by limiting the need for travel, excessive interference removal and lost material.”

Additionally, on the NSS-Shipyard effort, “The Navy is also leveraging the recent successes of the Naval Sustainment System (NSS)–Aviation that has increased the mission capability rates of its F/A-18 E/F fleet by creating a NSS– Shipyards. Similar to NSS-Aviation, the NSS-Shipyards has brought in outside business process experts to improve productivity and identify areas for long-term improvement at Norfolk Naval Shipyard and Puget Sound Naval Shipyard. This includes a mobile passive Radio Frequency Identification (pRFID) system, which is similar to a GPS that tracks material throughout the shipyard. This creates a way for material targeting to record the distance items under maintenance travel. It will also eventually reduce costs by eliminating lost material and work hours associated with locating misplaced material. The Navy will expand that effort to all four public shipyards in FY 2020.”

On the SIOP, the written testimony notes that, though the entire plan will span 20 years and will cost upwards of $20 billion, some smaller changes have already been implemented under this plan that are creating savings already. The bigger savings will come as a result of the yard redesign – digital twins of two of the four yards are being created now, with the other two to be created next year, so engineers can map out more efficient designs for the shipyards – but smaller savings are being seen today. Accomplishments include installing new heavy-lift cranes at Pearl Harbor Naval Shipyard & Intermediate Maintenance Facility and Puget Sound Naval Shipyard & Intermediate Maintenance Facility, and reopening the renovated Waterfront Operations Support Facility at Norfolk Naval Shipyard that “houses 15 shop spaces and allows for work to be executed near to the ships, reducing travel time and increasing efficiency.”

“The net result of all these integrated efforts is that the Navy is seeing positive results across the naval shipyard enterprise. This includes completing nine of the last ten CVN availabilities on time or early including the recent early delivery of USS Nimitz (CVN 68), the Navy’s oldest combat ship, from a docking availability at Puget Sound Naval Shipyard. The four naval shipyards have reduced the amount of workload carryover from one fiscal year to the next by nearly two-thirds between FY 2017 and FY 2020, from a total of 603,400 work days carried over between FY 2016 and FY 2017 to a projected 287,500 work days between FY 2019 and FY 2020. Additionally, the Navy has reduced delayed maintenance by half, from 1,734 total days delayed in FY 2018 to 894 total days in FY 2019,” reads the written testimony.

Despite the optimism from Moore and Geurts, Government Accountability Office defense capabilities and management director Diana Maurer noted in her written statement for the hearing that “The Navy continues to face persistent and substantial maintenance delays that affect the majority of its maintenance efforts and hinder its attempts to restore readiness. From fiscal year 2014 to the end of fiscal year 2019, Navy ships have spent over 33,700 more days in maintenance than expected. The Navy was unable to complete scheduled ship maintenance on time for about 75 percent of the maintenance periods conducted during fiscal years 2014 through 2019, with more than half of the delays in fiscal year 2019 exceeding 90 days. When maintenance is not completed on time, fewer ships are available for training or operations, which can hinder readiness.”

Seapower subcommittee chairman Sen. David Perdue (R-Ga.) in his opening statement couched this concern into context, saying, “in this era of great power competition, there’s no question that our Navy needs to grow larger and become more capable. My fear is that as the Navy grows, maintenance capacity will not keep pace and will result in a larger fleet with fewer ships ready for operational tasking.”

Still, Moore and Geurts told reporters they take a different view of the same data GAO used in its report. Whereas the GAO counts the days of ship maintenance overruns that occurred each fiscal year, regardless of when the ship availability started, the Navy assigns all the overrun days to the fiscal year when the availability began. For example, Moore said, if an availability was set to end in late Fiscal Year 2017 but stretched just over a year long and ended in early FY 2019, three fiscal years’ data would be affected by that single ship availability. The Navy, on the other hand, would assign that overrun only to FY 2017, because the planning and execution responsible for that overrun took place in FY 2017.

“The way that we look at it is, the availabilities that are now starting in ‘18 and ‘19, those performance trends are dramatically improved. So that’s the trend we want to continue on,” the admiral said.
“Unfortunately, some of the delays that you’re seeing (in the GAO’s representation of the data) are the hangover from when we didn’t have the capacity and we didn’t have the trained workforce, and those backlogs have really killed us over the last three or four years. But those are going away.”