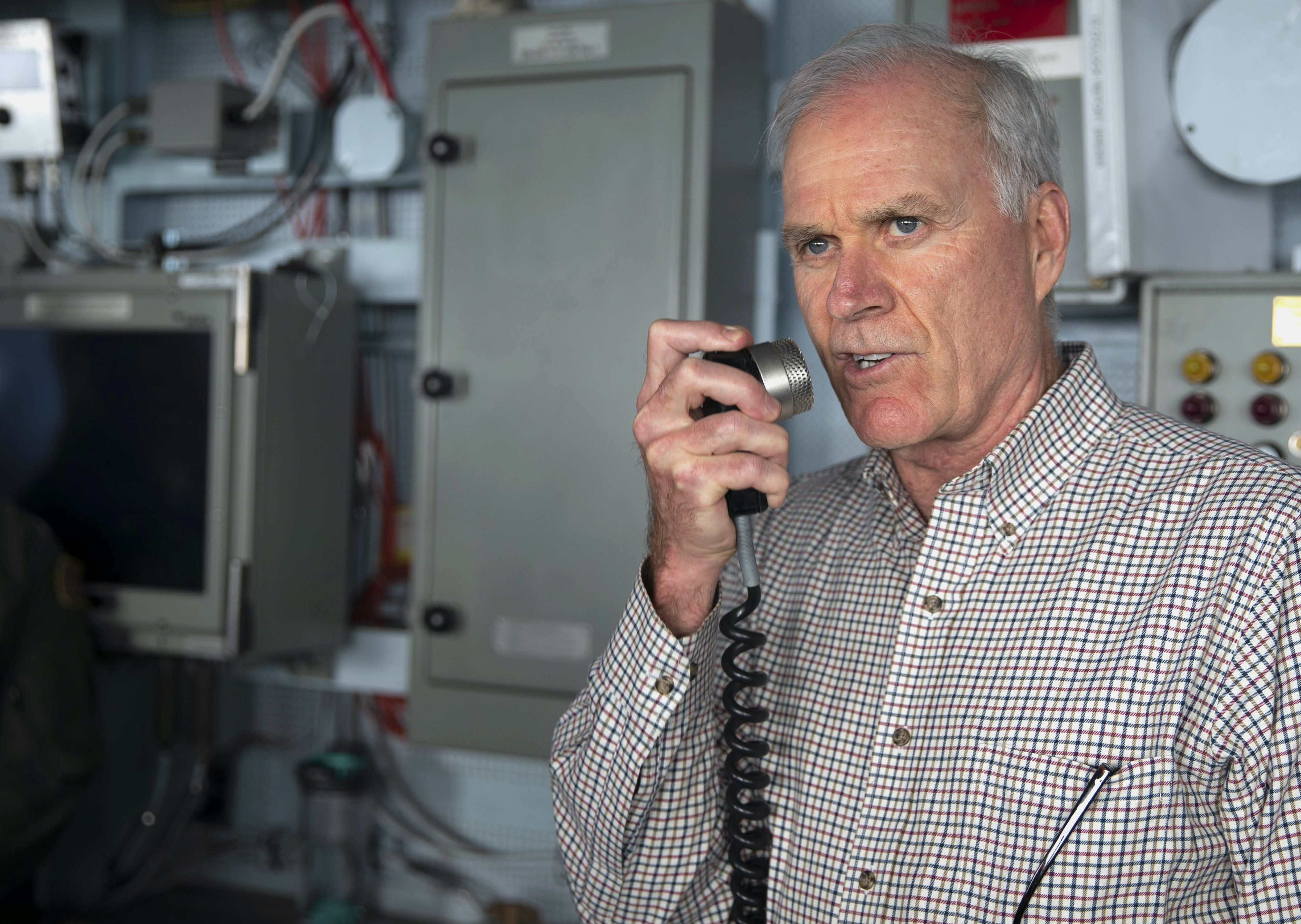 Secretary of the Navy Richard V. Spencer addresses the crew of USS Gerald R. Ford (CVN-78) via the ship’s 1MC during a visit to the ship at sea on Oct. 27, 2019. US Navy Photo

This post has been updated with additional comments from the Navy and SECNAV Spencer.

On Saturday, reports from NBC and The New York Times indicated Spencer had threatened to leave his office over Trump’s intervention on the issue.

“Contrary to popular belief, I’m still here. I did not threaten to resign,” Spencer said at Halifax during an Arctic security panel. “Let’s just say we are here to talk about external threats and Eddie Gallagher is not one of them.”

Spencer told Reuters on Friday a review of Gallagher’s rating should continue, despite a Thursday tweet from Trump that called to stop the process.

“I believe the process matters for good order and discipline,” Spencer said in remarks that were confirmed by a Navy spokesperson to USNI News.
“I think we have a process in place, which we’re going forward with, and that’s my job.”

Under U.S. Navy personnel rules, an enlisted Special Operator’s rating can be revoked or changed through a personnel process that would strip the right of a sailor to wear the NSW warfare pin. The review board to consider Gallagher and Lt. Jacob Portier was ordered by Naval Special Warfare Command Head Rear Adm. Collin Green for Dec. 2, reported by Navy Times.

On Thursday, Trump tweeted that the process should be stopped.

“The Navy will NOT be taking away Warfighter and Navy Seal Eddie Gallagher’s Trident Pin. This case was handled very badly from the beginning. Get back to business!” Trump wrote.

Following the tweet, the Navy issued a statement implying it would proceed with the board unless presented with a formal order from the White House.

“The Navy follows the lawful orders of the President. We will do so in case of an order to stop the administrative review of SOC Gallagher’s professional qualification,” top Navy spokesman Rear Adm. Charlie Brown said in a late Thursday statement to USNI News.
“We are aware of the President’s tweet and we are awaiting further guidance.”

A White House spokesman did not respond to requests for comment from USNI News.

Several outlets reported after the tweet, Army leaders recommended to Trump should allow the process to continue and stressed the review was overseen by senior enlisted SEALs.

Gallagher’s lawyer told USNI News late Friday that Spencer’s comments were a sign the Navy was acting against the intent of President Trump.

“The secretary should not be citing ‘good order and discipline’ as a reason to disregard a clear directive from the commander-in-chief,” Timothy Parlatore told USNI News.
“Moreover, the secretary should not be supporting such action when he has failed to ensure good order and discipline is applied across the board by holding [military] prosecutors and NCIS agents accountable for their criminal conduct in this case.”

Gallagher was charged with major crimes that included premeditated murder and obstruction of justice but was ultimately only found guilty of a charge related to posing with a dead ISIS combatant.

Navy leadership moved to reduce him in rank to Petty Officer First Class but President Trump overturned the demotion and restored Gallagher to a Chief Petty Officer last week.

“The President taking action on personnel matters pertaining to single service members is virtually unprecedented. Moreover, Gallagher received legal clemency from the President, which doesn’t affect the service’s or community’s ability to make traditional decisions regarding his fitness to continue as a SEAL — a different professional standard,” Bracknell said.
“Even so, the SEAL commander should be mindful of picking a public fight with the [President], and the implications it could have for civil-military relations at a particularly strained point in our history.”

In terms of the pending review board, Spencer said on Friday President Trump was welcome to overturn any decision from the NSW board.

“The commander-in-chief is the commander in chief,” he told Reuters.
“He can do what he wants.”