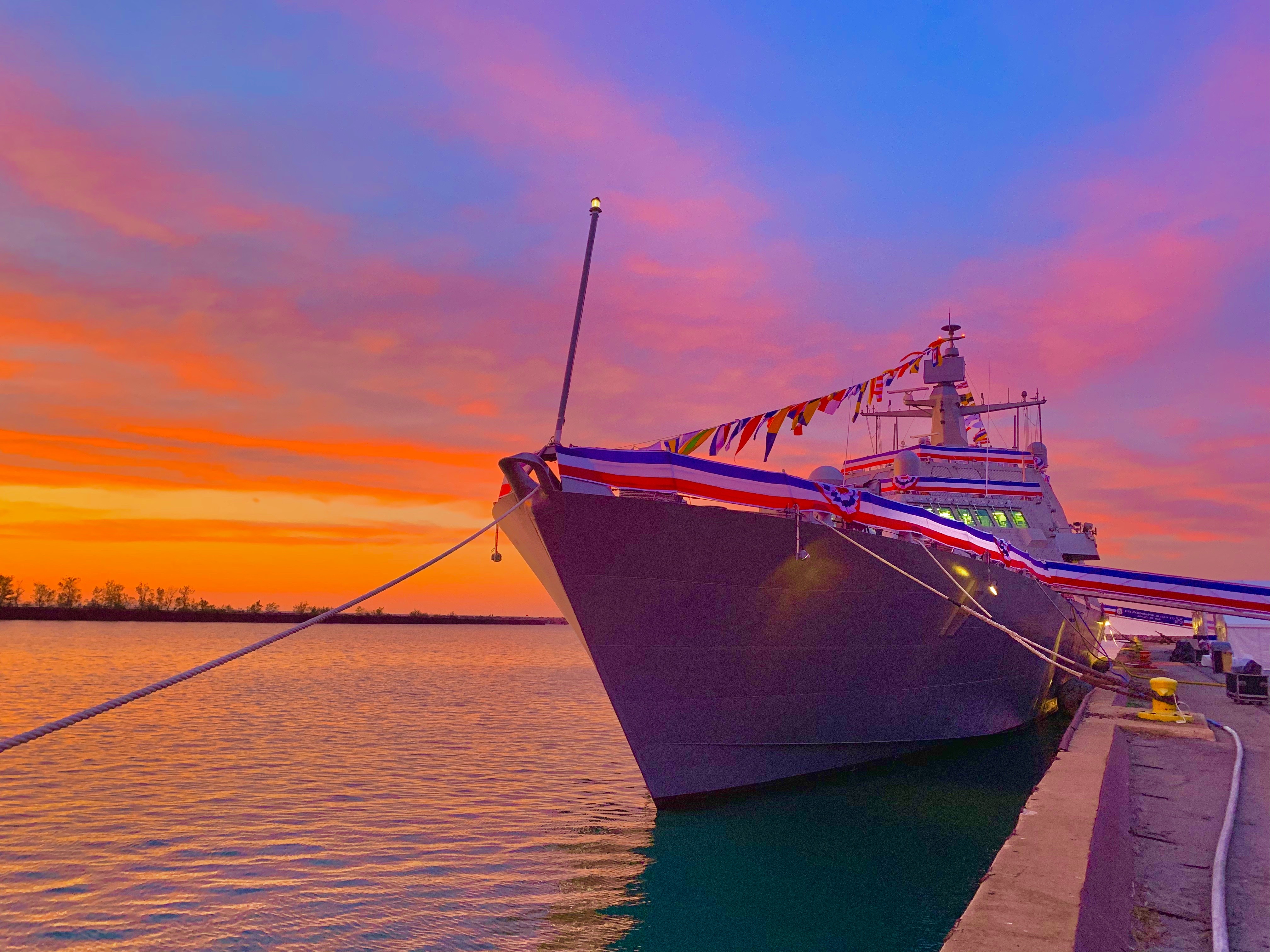 ARLINGTON, Va. – The Navy is conducting wargames and prototyping efforts to better understand how unmanned surface vehicles will fit into the fleet and how the Littoral Combat Ship will expand its presence around the globe.

Program Executive Officer for Unmanned and Small Combatants Rear Adm. Casey Moton this week described several efforts that look at how to maintain and sustain both types of vessels, as well as how USVs will operate and contribute to a fight alongside manned counterparts.

On the unmanned side, the Navy already has at its disposal two Large USVs as part of the Pentagon’s Overlord program that took vessels and converted them to autonomous controls. These first two Overlord vehicles contributed to Phase 1 testing, ensuring the vessels could navigate autonomously while following the rules of the road while at sea and also testing their hull, mechanical and electrical (HM&E) systems were reliable enough to support operations at sea without a maintenance team on hand at all times, Moton said Wednesday at a Surface Navy Association chapter lunch.

The Navy expects to buy two more Overlord vehicles this fiscal year, which will contribute – along with the first two vessels – to Phase 2 testing for more advanced work on navigation and HM&E reliability, as well as work with Navy payloads and command and controls systems.

Some things about LUSV are already known. For example, autonomy efforts will focus on navigation, obstacle avoidance, interactions with other ships at sea and keeping HM&E systems operating. LUSV will not have the autonomy to make decisions about firing missiles from its vertical launching system tubes.

“The plan is, human in the loop on these,” Moton said of decisions on weapons engagement. He said there’s been a lot of concern about fielding the LUSV, which essentially amounts of an unmanned missile truck. But, he noted, a manned Aegis destroyer can already be told to fire its weapons on a target the ship cannot see with its own sensors, and he said LUSV would operate in much the same way. A human will still make decisions on kinetic engagements, they just won’t be located on the vessel itself.

Other aspects of using USVs are less defined, though. Moton called today “a time of questions” on unmanned systems, and he said prototyping and experimentation was the only way to get through this time and move on to having answers.

For example, on tactics and CONOPS, Moton said the LUSV would be able to fire weapons as directed by other platforms, but it would not have its own sensors and fire control system and therefore the ability to fire weapons in self-defense. This means that the vessel would have to sail close to a destroyer, LCS or other ship that can provide protection, or be willing to be lost during a battle.

“They either operate close in with the protection of the units they’re supporting, or if you push them out further there’s an acknowledgement that you’ve either got to provide some over protection to them or you need to accept that a number of them are going to be attritable. And we are definitely tracking that,” Moton said.
“Some of what the N96 Future Surface Combatant Force [analysis of alternatives] has been doing is factoring those kinds of things in when they’ve done their scenario work” to figure out what capabilities the LUSV will need and how many the Navy will buy.

“Some of the tactics and CONOPS is part of what we’re working out with the Overlord,” Moton said. The Navy will continue to experiment with CONOPS once the Overlord vehicles and the subsequent Navy-designed LUSVs join the new Surface Development Squadron One.

Manning for the unmanned vehicle is another issue still being worked.

“At least initially … the LUSV requirements right now have a small crew onboard. And the desire of that is to support getting the ships underway from the pier and out the channel. Right now there’s going to be people onboard getting out to the sea buoys, doing things like force protection, refueling, personnel transfer, all those sorts of manpower-intensive things – people are going to be onboard. LUSV is actually going to be designed to accommodate those folks,” Moton said.
“At the right time, those folks can come off and it can be pushed out under autonomous operation to go do its mission. [Medium USV] is not going to actually have any bunks because it’s smaller, but it is going to have the capability for at least people to get onboard to get it in and out of port.”

Moton acknowledged there had been serious concern from lawmakers and others about the Navy’s understanding of how to operate unmanned vehicles and best leverage them into Navy operations. As a result, many lawmakers have supported cutting funding for LUSV and MUSV in the Fiscal Year 2020 budget, even as the Navy is trying to accelerate its unmanned investments to get to sea for experimentation and learning.

“Some of the great concerned reaction out there is, how are we going to answer these questions?” Moton said, noting questions remained on concepts of operations (CONOPS), logistics and sustainment, policy considerations, infrastructure and homeporting needs and more.
“We’re working on some of the answers. In terms of those big ones – how is it going to get out, how it’s going to do sea and anchor – we are being very measured about how we’re going to go do this.” 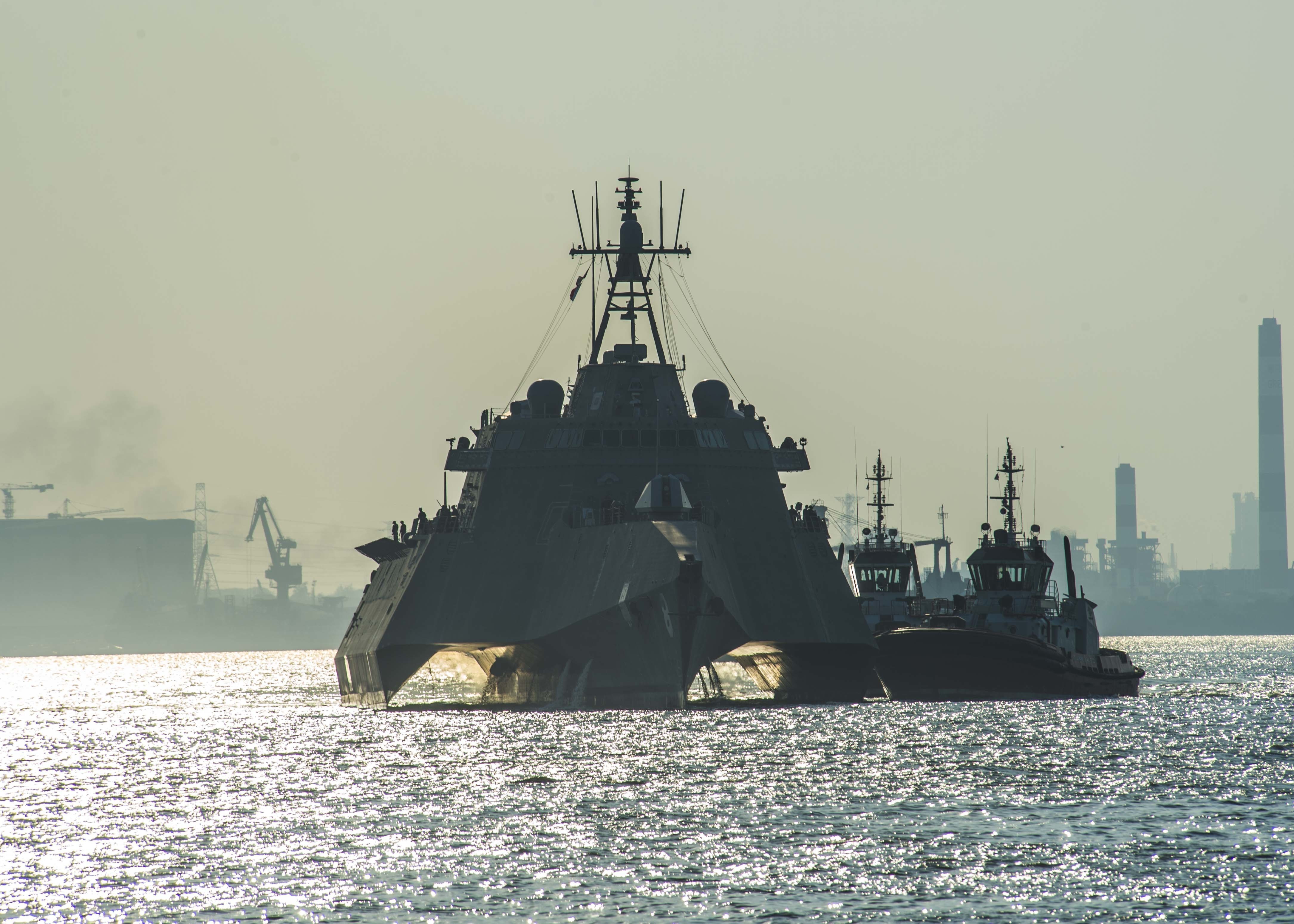 USS Montgomery (LCS-8) arrives in the port of Tanjung Perak as part of Cooperation Afloat Readiness and Training (CARAT) Indonesia 2019 on July 31, 2019. US Navy Photo

On the manned side, Moton addressed the LCS program, which now has three ships operating forward in two numbered fleets. USS Montgomery (LCS-8) and USS Gabrielle Giffords (LCS-10) are operating out of Singapore, and USS Detroit (LCS-7) is operating in U.S. 4th Fleet waters.

Montgomery and Giffords deploying from San Diego and operating forward in Singapore was always part of the plan; Detroit deploying from Mayport to 4th Fleet is a modification to the original vision, which would have had the East Coast ships heading to Bahrain in U.S. 5th Fleet.

Moton said the East Coast LCSs will eventually operate in U.S. 6th and 5th Fleets, but many questions remain as to how to support LCSs in these geographies.

Ahead of this first 4th Fleet deployment, “part of what we did was, we did quite a few tabletops looking at LCS corrective maintenance, preventative maintenance. We basically wargamed it – who was going to do what, where’s it going to happen out of, what kind of contracts. We did that working with 4th Fleet and with SEA 21,” he said, referring to Naval Sea Systems Command’s Ship Maintenance and Modernization arm.

Whereas, in that wargame, the PEO and SEA 21 partnered with the Southeast Regional Maintenance Center (SERMC) to learn how to support Detroit’s maiden deployment, for 6th and 5th Fleets the PEO and SEA 21 would partner with the Forward Deployed RMC, which has locations in Spain, Italy and Bahrain.

To supplement these wargaming efforts to better understand overseas maintenance and sustainment, Moton said lessons learned from the three ongoing deployments are being collected and disseminated by the Top Technical Issues forum he set up.

In collaboration with the Commander of Naval Surface Forces and Naval Supply Systems Command, the Top Technical Issues group is getting “almost real-time feedback from Montgomery and Gabrielle Giffords on where they need changes to their forward-deployed spares status, do we have the right contracting methods in place to reach back to [original equipment manufacturers], what are things we can do to make the ship operators and the RMCs more self-sufficient in their ability to do corrective maintenance? We are rolling all of those in as fast as we can, the lessons learned, and making improvements.”