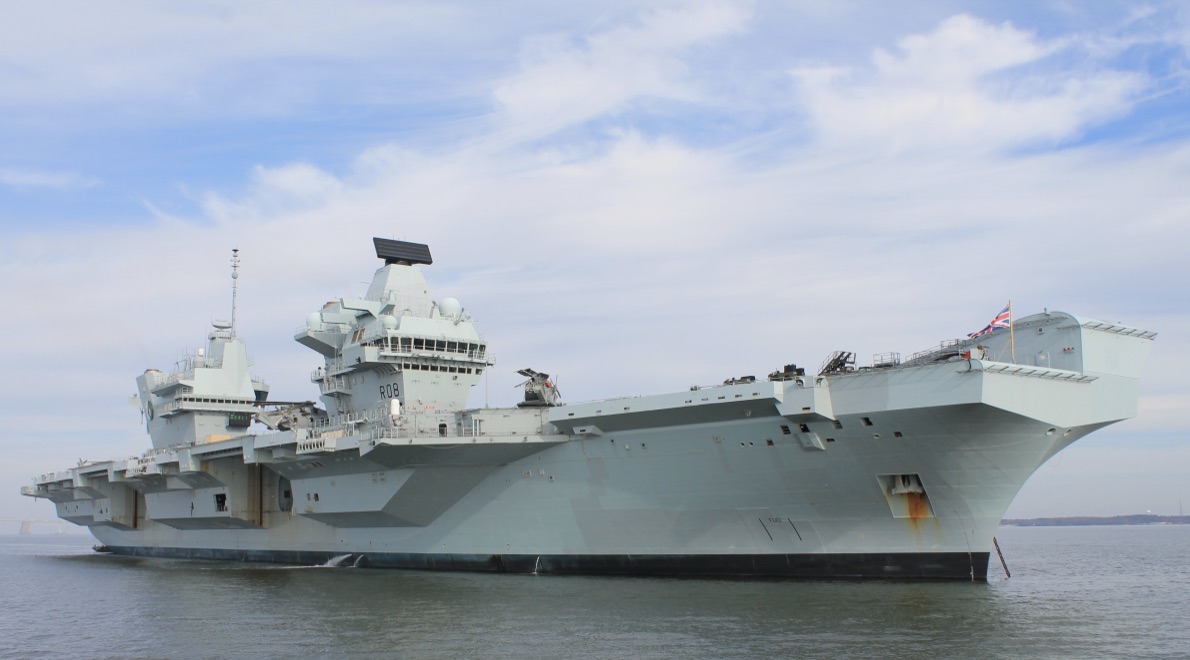 ABOARD HMS QUEEN ELIZABETH, IN THE CHESAPEAKE BAY — The U.K. Royal Navy intends its largest, most advanced warship ever built to be considered interchangeable with U.S. Navy carriers, its top admiral said on Thursday.

HMS Queen Elizabeth (R08) is indicative of both Great Britain’s return to carrier-based fixed-wing flight operations after a decade’s absence and the strength of its cross Atlantic partnership with the U.S., said Adm. Tony Radakin, the First Sea Lord and U.K. Chief of Naval Staff. Radakin was in Queen Elizabeth’s hangar bay addressing the second Atlantic Future Forum, while the ship was moored in the Chesapeake Bay just offshore of Annapolis, Md.

“As she has demonstrated already, we can successfully field a combined U.S., U.K. carrier strike group,” Radakin said. “I look forward to this developing further, moving to the point where we are not only talking about interoperability, but we are looking for interchangeability. ”

Queen Elizabeth can deploy with up to 36 F-35B Lightning II Joint Strike Fighters. The ship is wrapping up a series of exercises off the Atlantic Coast, in coordination with the U.S. military, he said.

When Queen Elizabeth embarks on its first deployment in 2021, its airwing will include a mix of Royal Navy F-35B fighters and F-35B fighters from U.S. the “Wake Island Avengers” of Marine Fighter Attack Squadron (VMFA) 211. The combined deployment, with U.S. Marine Corps fighters integrated into a U.K. carrier airwing, signifies the degree to which the two forces can operate with each other, Radakin said.

The British designed Queen Elizabeth with F-35B operations in mind. Radakin said. The technological advances of the F-35B inspired much of the ship’s automation, Commodore Steve Moorhouse, Queen Elizabeth’s commanding officer, told members of the media before the forum started.

Queen Elizabeth’s core crew numbers about 800 officers and enlisted personnel. With an embarked airwing, the crew will about double in size. The highly automated weapons system only requires about 40 crew members to operate, a fraction of the crew performing similar tasks on U.S. aircraft carriers.

However, Moorhouse said the smaller crew size had not reduced the ship’s readiness or ability to operate with U.S. forces. For much of the autumn, Moorhouse said Queen Elizabeth conducted exercises with the help of U.S. Navy and Marine Corps personnel. He sent British F-35 fighters to U.S. bombing ranges and British antisubmarine helicopters to track U.S. submarines.

When Queen Elizabeth visited the U.S. about a year ago, the purpose of the visit was to test how well the F-35B, a fifth-generation fighter worked with the fifth-generation aircraft carrier, Moorhouse said. This year, the operations worked on perfected joint operations.

“What we’re trying to do is get beyond being interoperable. There are lots of nations that can do that,” Moorhouse said. “What we want to be here is absolutely integrated, so almost it doesn’t matter what flag you’re flying; the U.S. ship or aircraft can dock into our strike group seamlessly as though it was a British ship. We’ve made some huge strides this autumn getting into that.”