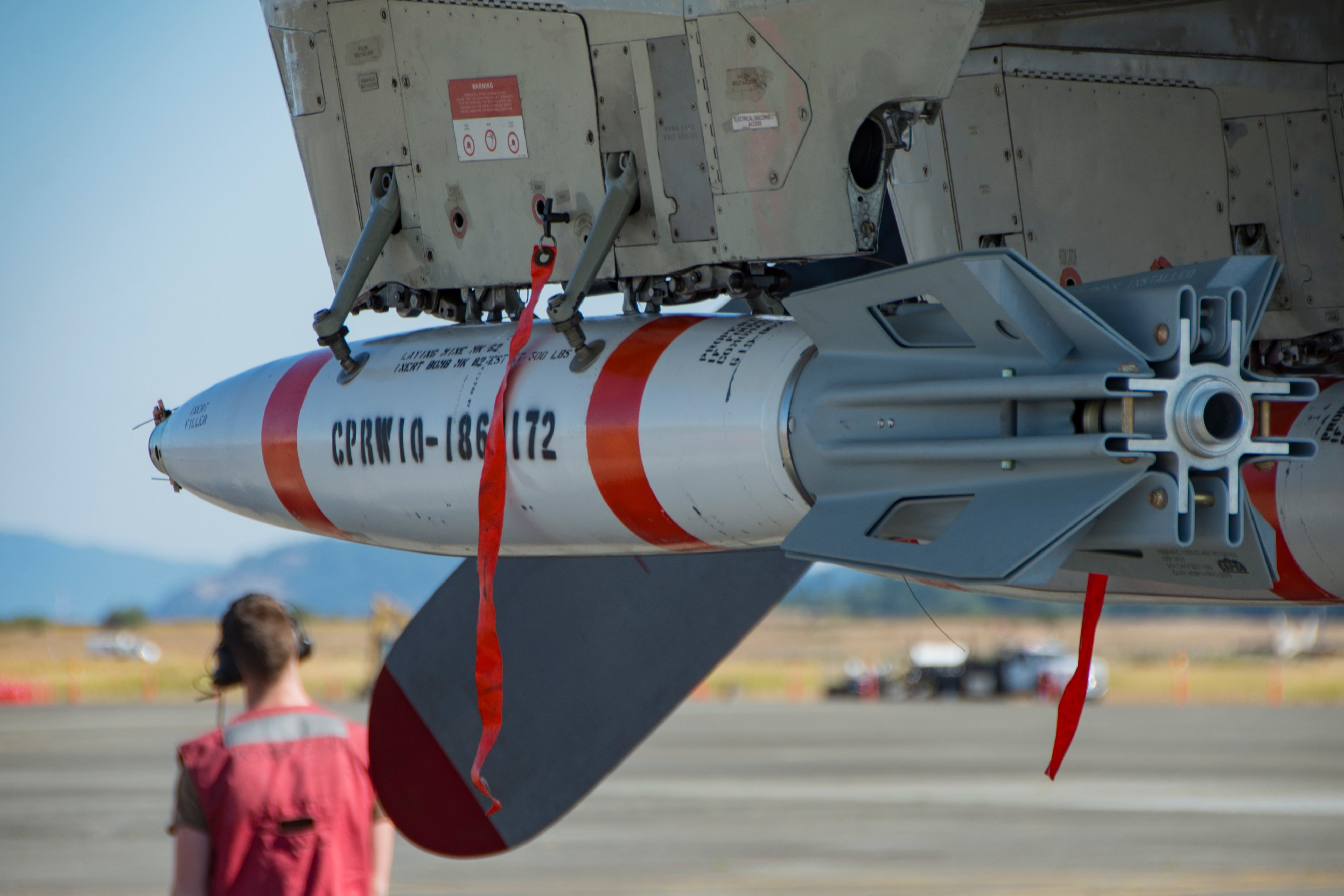 A Mark-63 Quickstrike Mine is mounted on a P-3 Orion aircraft in the foreground while Aviation Ordnanceman 3rd Class Cooper Peterson, assigned to the ordnance division of Patrol Squadron (VP) 40, communicates with aircrew during preflight. US Navy photo.

This post has been updated to note the correct title for Sam Taylor, who is the senior leader for mine warfare within the Program Executive Office for Unmanned and Small Combatants.

The U.S. Navy is taking offensive mining more seriously under the National Defense Strategy and is working to bring new technologies and tactics to the fleet to modernize mine warfare for a high-end fight.

Though mine warfare has previously resided somewhere between the surface warfare community and the expeditionary and amphibious warfare communities when it comes to paying for the mines, developing tactics and techniques and conducting training events, the submarine community is on the verge of becoming much more involved in mining, the head of the mine warfare division at the Naval Surface and Mine Warfighting Development Center said recently.

“That task went to many folks – the fleet commanders, the four-star fleet commanders, the OPNAV staff – we spent the summer working through that. A lot of that work is still going on,” he said while addressing the National Defense Industrial Association’s annual Expeditionary Warfare Conference, but he previewed some big changes.

Today, Merwin said, “at SMWDC mine warfare division, I own the five people that do mine warfare plans, mining plans for the United States Navy. We write all the minefield planning folders for the systems we have right now – basically we have Quickstrike mines, air-delivered dumb bombs, and we have a few submarine-launchable mines. That is what we have now. And I have the planning folders that we would use to put those in.”

“That is changing big time. [The Office of Naval Research] has been involved in this for a while, and there are a lot of systems, Future Naval Capabilities, that are being tested,” he continued.
“The future of mining will be [unmanned underwater vehicle] clandestinely launched mines. And that’s probably as much as I can say here.” 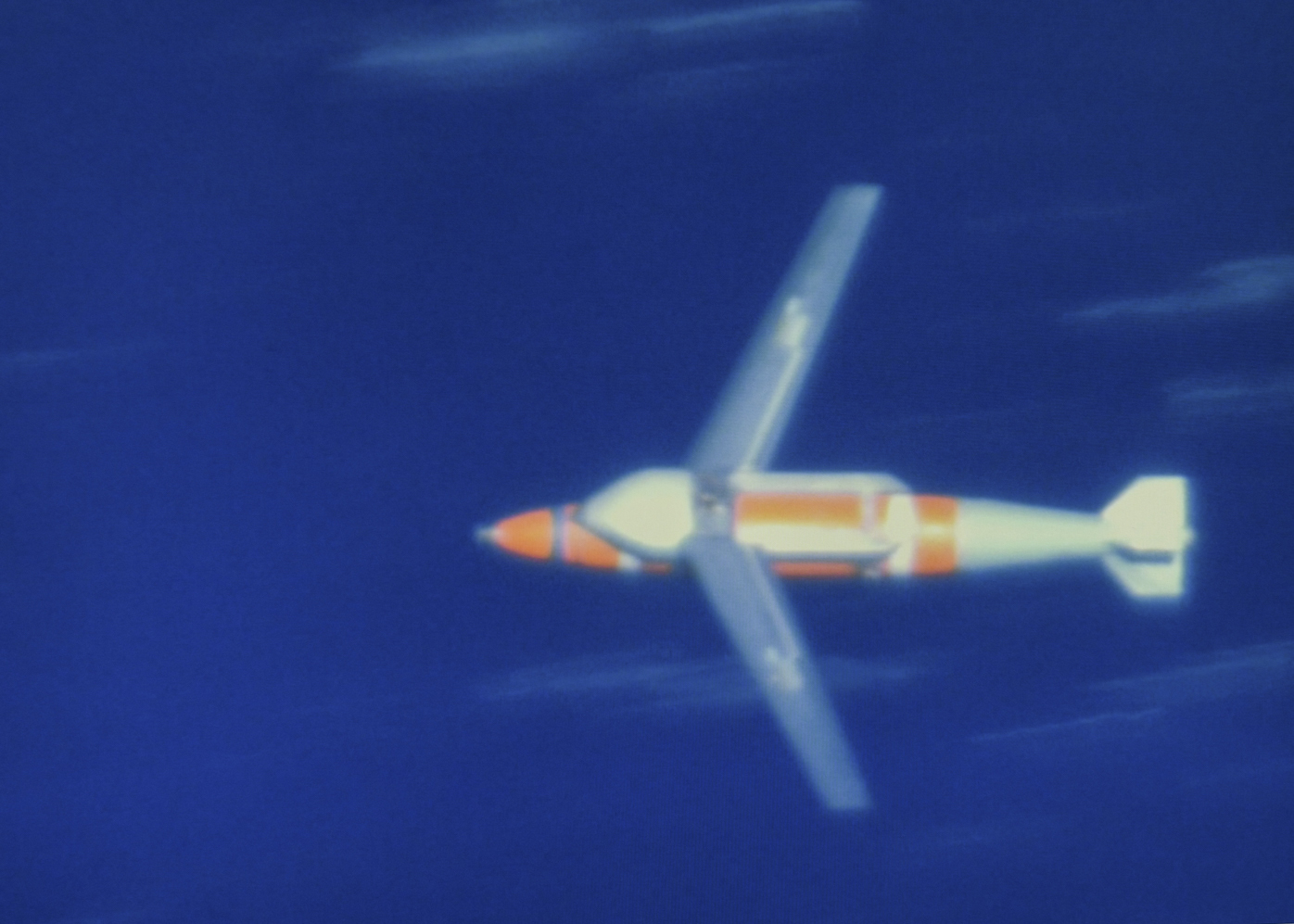 The Quickstrike-Extended Range (QS-ER) Naval mine project drops towards the Pacific Ocean from a B-52 Stratofortress, assigned to the 49th Test and Evaluation Squadron from Barksdale Air Force Base, La., during an operational demonstration May 30. The QS-ER project was initiated by U.S. Indo-Pacific Command as part of ongoing efforts to modernize and enhance military readiness throughout the joint forces in the Indo-Pacific region. US Navy photo.

Asked during a question-and-answer session what SMWDC’s role would be in offensive mining in the future, he said, “the submarine community has not been very engaged in mining in the past; that is changing. They’re getting very interested. The Extra Large UUVs and even some additional submarine-launched mines, that is the future. So I think the submarine force will be very much more engaged. In fact, it’s quite likely they’re going to own it, at least on the man, train and equip side. Who’s going to own it on the [command and control] side, that’s actually being worked out right now; we’re gaming that at [the Navy Warfare Development Command] next month. So for now, I definitely still have a role; in the future, I may or may not. We’ll always have some sort of connection to it (through the division’s role as a deployable mine warfare commander), but the submarine community is definitely taking much larger ownership of that than they have in the past.”

During a subsequent presentation at the Expeditionary Warfare Conference, Sam Taylor, the senior leader for mine warfare within the Program Executive Office for Unmanned and Small Combatants, discussed new technologies that will shape the future of offensive mining.

Like Merwin said, Taylor explained that today the Navy has the Quickstrike family of mines – the Mk 62, Mk 63 and Mk 65 unguided 500-pound, 1,000-pound and 2,000-pound bombs, respectively – as well as the Mk 67 Submarine Launched Mobile Mine (SLMM) in its inventory.

In the works, though, is the integration of the Quickstrike mine with the Joint Direct Attack Munition (JDAM) tail kit and the Extended Range (ER) wing kit to increase the standoff distance when employing mines and to give them guidance capabilities.

The Navy first demonstrated the Quickstrike JDAM capability at the Valiant Shield 18 exercise in the Northern Mariana Islands last year, and it has also completed another operational demonstration, according to Taylor’s presentation slides. Navy photos show that a B-52 Stratofortress assigned to the Air Force’s 49th Test and Evaluation Squadron in Louisiana conducted an operational demonstration of the Quickstrike-ER in the Pacific Ocean in May 2019. 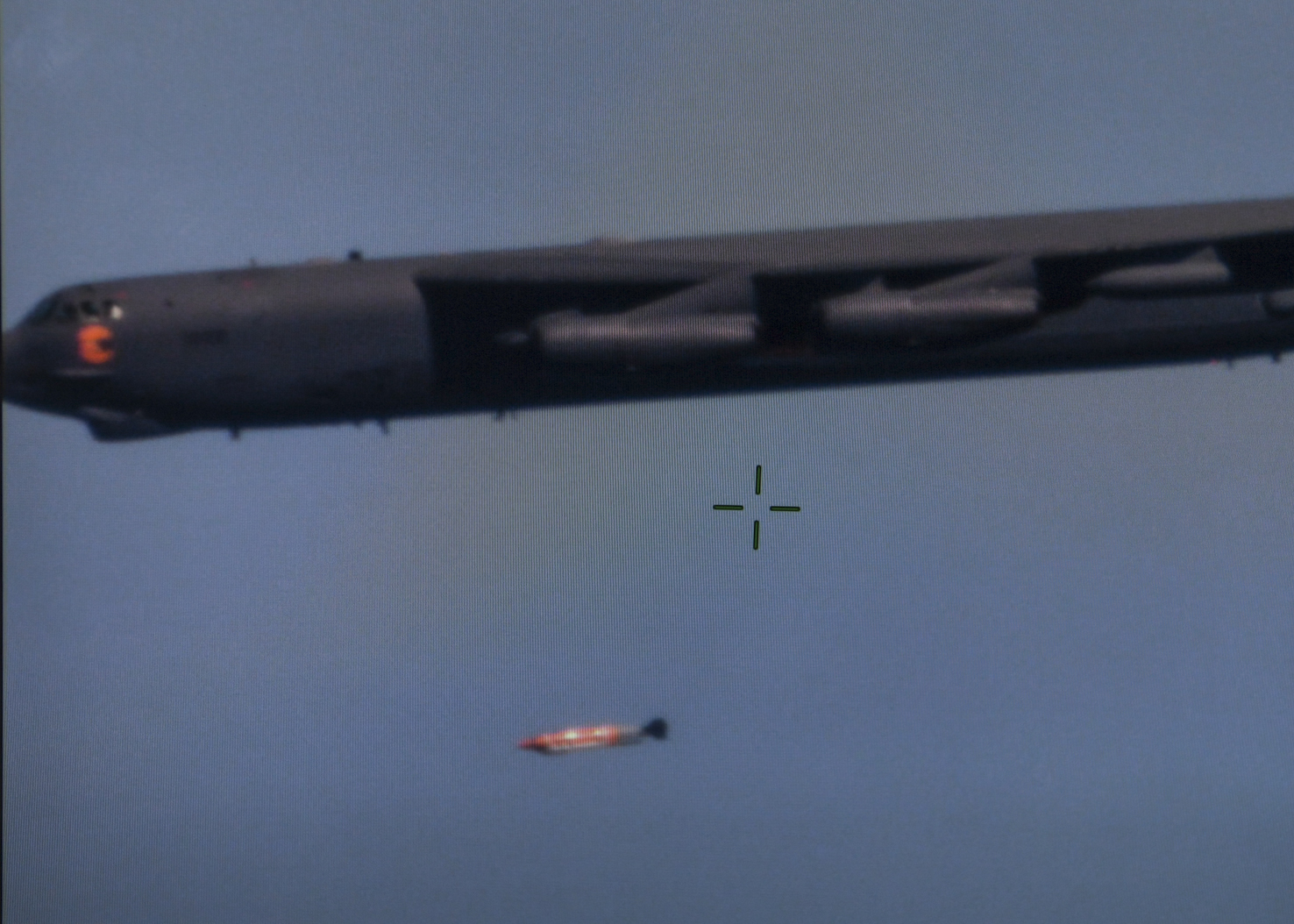 A B-52 Stratofortress, assigned to the 49th Test and Evaluation Squadron from Barksdale Air Force Base, La., conducts an operational demonstration of the Quickstrike-ER (QS-ER) Naval mine project in the Pacific Ocean, May 30, 219. US Navy photo.

In addition to the tail kit and wing kit integration efforts, the Navy has also competitively awarded a contract for a new target detection device for the mines, according to the slides.

The Navy is also working on a Clandestine Delivered Mine to support the submarine- and UUV-delivered mining that Merwin mentioned. Taylor’s slides showed the CDM program conducting prototyping efforts now and estimating initial delivery this current fiscal year, in Fiscal Year 2020.

Most notably, though, the Navy is conducting its Hammerhead mine program under the Maritime Accelerated Acquisition program rapid acquisition authorities granted by Congress. Hammerhead was started in 2018 and would take the Mk 54 effector and encapsulate it in a canister that could be prepositioned and then activated later as needed by fleet commanders. The modular design would allow for easy upgrades to the weapon, the sensors or the communications and control systems.

Taylor said in his presentation that the Navy selected Hammerhead for the MAA program and is using other transaction authorities (OTAs) to develop the sensor in a big to move forward in development as fast as possible.

“A resurgence in mining has taken place for the past few years as the Navy goes to the [National Defense Strategy]. However, we’re trying to pivot smartly, deliver the capability the warfighter needs as quickly as we can, so we’re trying to use whatever authorities are there, whatever things we can,” he said.
“As I said, Hammerhead is an MAA, and we’re looking at other tools in the toolbox to accelerate that delivery even more.”

Asked by USNI News during the question-and-answer session what it said about offensive mining that Hammerhead was selected as a rapid acquisition program, Taylor simply said, “all I can say in this forum is, Hammerhead was highly desired, we needed to update where things are, and it says that mining is important to us in this near-peer competition. And I’ll leave it at that.”