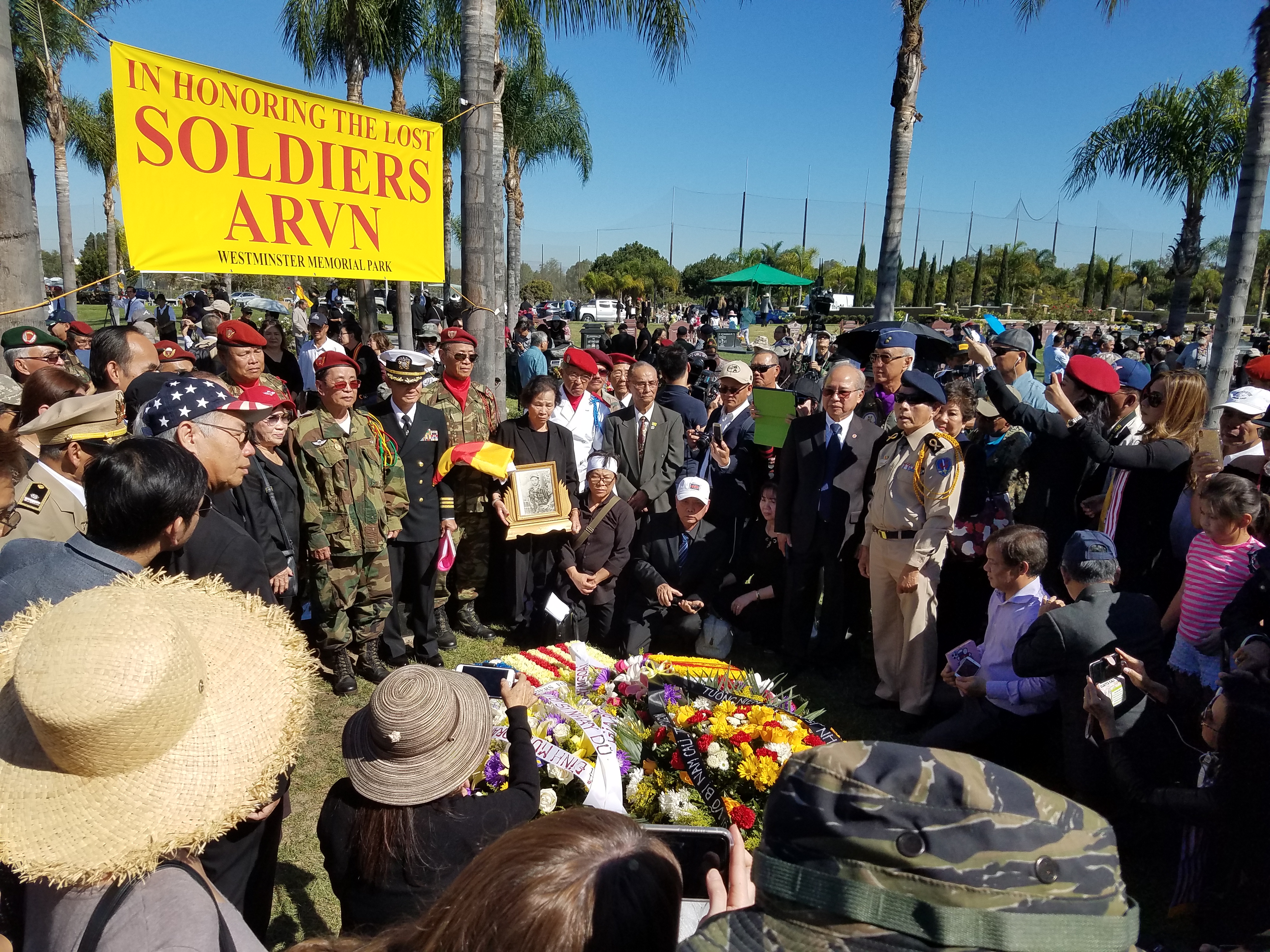 Attendees of a ceremony honoring of 81 unidentified South Vietnamese soldiers who were killed on 1965. USNI News Photo

WESTMINSTER, Calif. – Following a final prayer by a Navy chaplain, pallbearers lifted a casket containing the remains of 81 unidentified South Vietnamese soldiers and walked to a waiting white hearse.

At a cemetery a mile away, the soldiers – paratroopers killed in 1965 when their U.S. Air Force transport plane crashed in South Vietnam – were laid into the ground by a granite stone marking their service. Their final resting place, by a memorial pond and snug in the warm embrace of the “Little Saigon” community in this Southern California suburb, is a far cry from the decades spent in limbo.

Remains of the four U.S. aircrew and the soldiers were recovered at the crash site in 1974. But the soldiers honored on Saturday – members of 72nd Company, 7th Airborne Battalion, Army of the Republic of Vietnam (ARVN) – were unclaimed by the Vietnam government, which refused to take possession. The remains, stored at the U.S. military’s POW/MIA lab since 1986, stayed there until September when a U.S. Air Force transport plane brought them to California for the official burial here with military honors.

“This is a moral duty to former comrades-in-arms,” James Webb, former U.S. Senator and Navy Secretary, told a crowd of more than 1,000 as a four-man honor guard of Vietnamese soldiers ringed a casket draped with the yellow-and-red-striped flag of South Vietnam.
“After 54 years, they’ve finally reached their final resting place.” 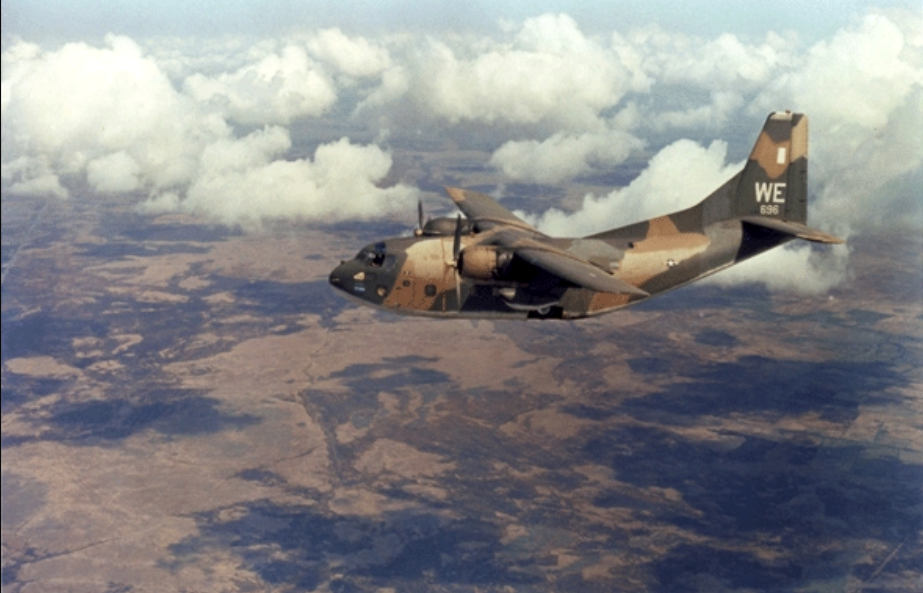 The Air Force crew killed in the Dec. 11, 1965, crash – Maj. Robert Horsky, Capt. George McKnight, Staff Sgt. Mercedes Salinas and Staff Sgt. Donald Stewart of the 309th Air Commando Squadron – were identified through DNA and, in recent years, buried at military ceremonies. But no flight manifest exists that listed the names of the 81 soldiers aboard the C-123B Provider transport plane flying to Tuy Hoa Air Base when it crashed.

Webb, a decorated Marine and Vietnam combat veteran, learned in 2017 of the status of the soldiers’ remains. He established the Lost Soldiers Foundation and raised support and attention to provide them with a proper burial and recognition.

“It’s the right thing to do,” said Navy Secretary Richard Spencer, who spoke at the memorial ceremony at the Westminster’s Freedom Park.

“We will never know the names of the men we honor today,” Spencer said. “We’ll never know their hopes, their dreams, their aspirations, or their stories. We’ll never know the loved ones that they left behind – mothers, fathers, brothers, sisters, wives and children – who never learned of their fate, and never had the opportunity to say goodbye.” 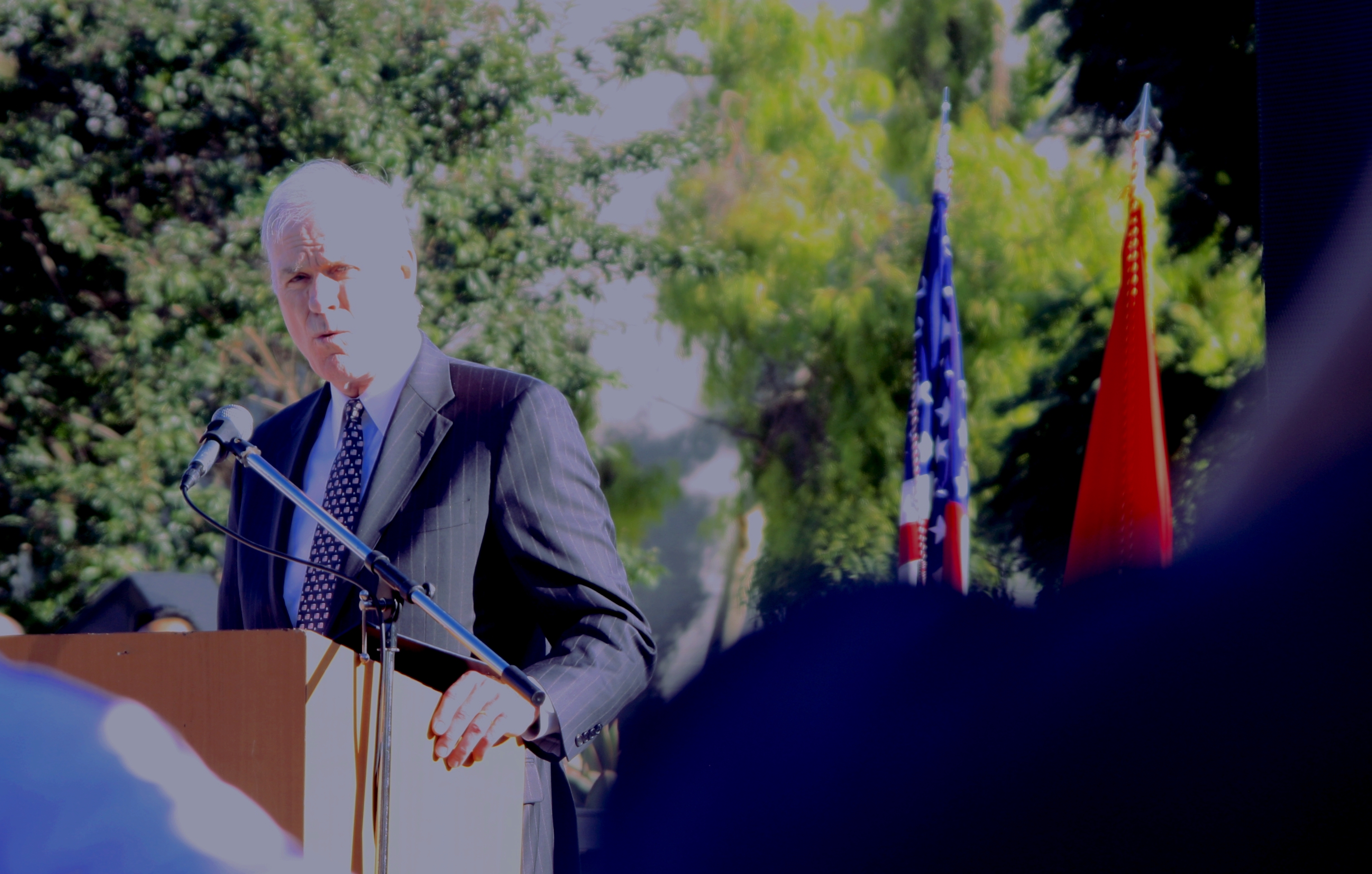 “While that freedom would prove to be tragically fleeting in the land of their birth, it lives on in the land of their final rest,” he said, adding “may these actions help us remember who we are as Americans, and who we should aspire to be: A people who respect and never forget those who fight alongside us.”

Spencer and Webb joined others at a graveside ceremony at Westminster Memorial Park. “Perished in the Cause of Freedom December 11, 1965,” states the black granite marker honoring the ARVN Soldiers.
“Together in America October 26, 2019.”

“The 81 heroes of the ARVN were the unknown soldiers of a defeated army who lost their homeland,” Phan told the crowd. The Hanoi government, he said, twice refused the U.S. offer to return and bury them in Vietnam, in essence stripping the fallen soldiers of their homeland.

Westminster is home to many families of Vietnamese refugees from the war as well as many U.S. military veterans “who fought in Vietnam alongside the South Vietnam Army in the name of freedom, democracy and human rights,” Tri Ta, the Saigon-born mayor of Westminster, said during the hour-long memorial ceremony.
“Our 81 Vietnamese heroes are finally home with their friends and family, because from here on, this community is their family.”

Vietnamese and U.S. soldiers “stood tall and strong together in life. They fought together under the guiding principle of freedom,” Ta said. “The bond between them went beyond time and space. The bond that gave our 81 lost angels the opportunity to rest on the same land that embodies the core ideals of democracy and freedom valued by all of those who’ve sacrificed their life in the Vietnam War.” 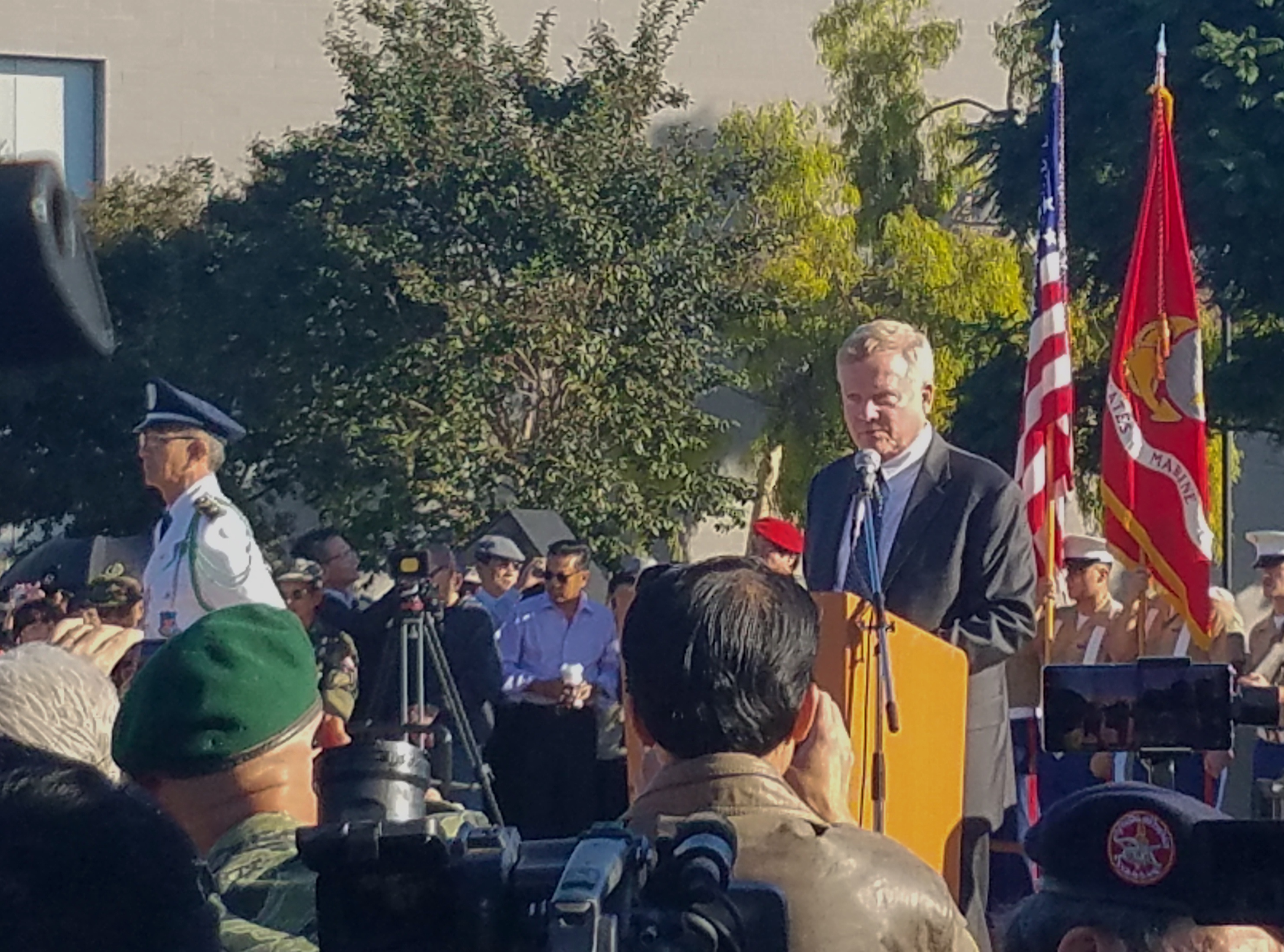 Webb said the lost soldiers “paid the highest price. They had the longest journey. They have finally come home….to a place very few of them even knew. But they will rest peacefully among people who now know this place and who will remember them with respect and with dignity.”

“The story of their loss on a long-ago battlefield is a permanent part of Vietnam’s history,” he said, “and the story of their salvation is now a part of America’s history. Their long journey is over. They have come home – not to the towns or to the villages where they were born, but here in America to a community that remembers them and respects them.”

Their fate, he noted, “was shared by many soldiers, airmen, sailors and Marines from among the more than 200,000 South Vietnamese and the more than 58,000 Americans who lost their lives in this long-ago war, and thousands of those soldiers who’ve lost their lives on different battlefields who have never been found. So, in their memory, we will treasure the remains that are with us and the honor that we are able to render on behalf of those who were lost and will never be found.”

Frederick W. Smith, the founder and chief executive officer of FedEx, threw his support behind Webb’s mission and helped fund the Lost Soldiers Foundation. The decorated, former Marine Corps infantry officer did two combat tours in Vietnam and lost many friends on the battlefield.

“I think about many others, my friends, who gave their lives in Vietnam, whose names are on the Vietnam Memorial,” Smith said at the ceremony, noting schools in Vietnam that bear the names of four of his fallen friends: 1st Lt. Joe Campbell, 1st Lt. Jack Ruggles, Navy chaplain and Cmdr. Vincent Capodanno and Army 2nd Lt. Richard Pershing.

“I think about these men every day, just as I am confident the friends, families and comrades of these men think about them,” said Smith, a longtime friend of Webb’s. “Now thanks to Jim’s efforts, they’ve been brought to a place of final repose, where they will receive the respect and honor which they deserve.”