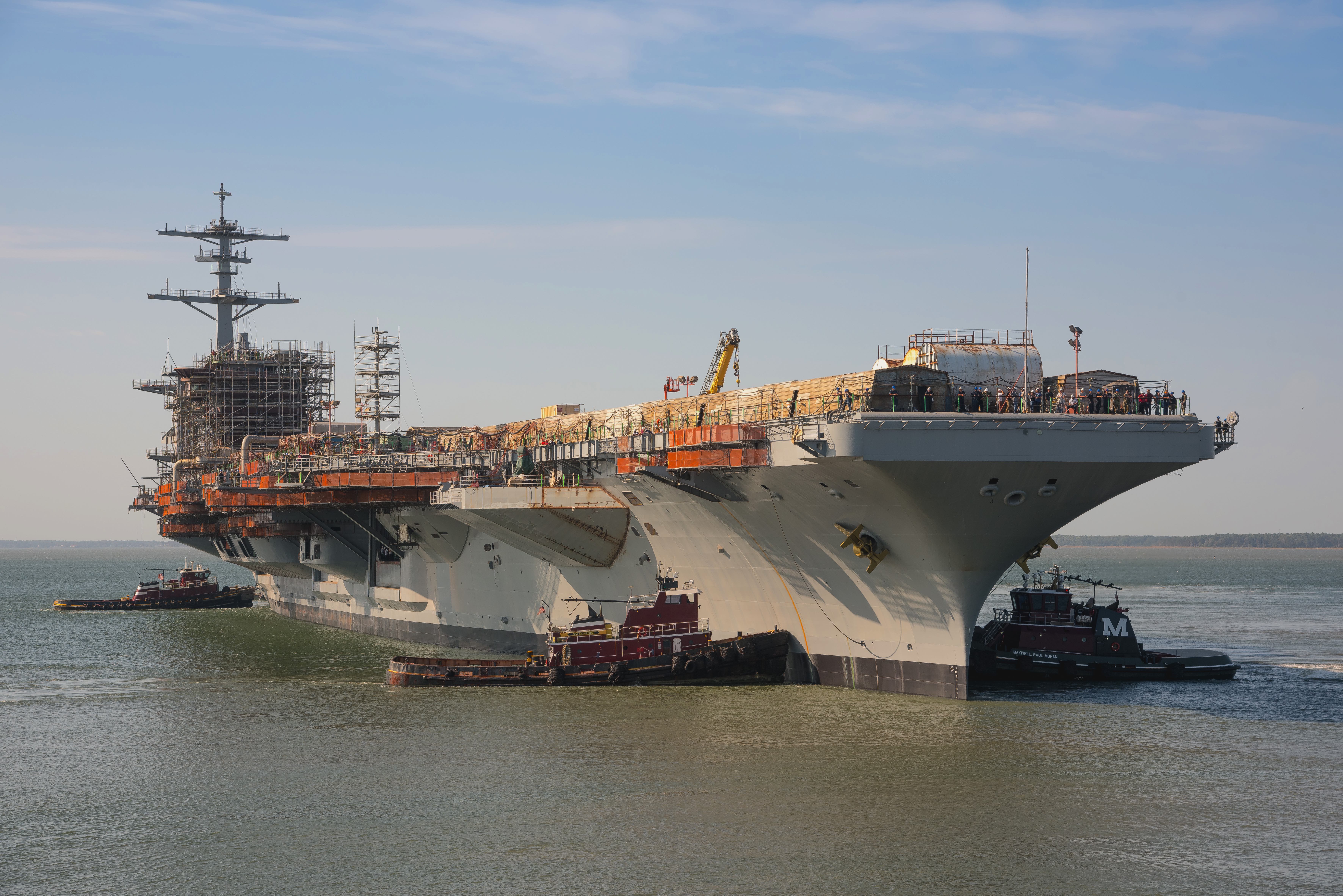 The Navy’s two fleet commanders are taking a “hard look” at the current model, the Optimized Fleet Response Plan, and will send the chief of naval operations ideas for better or different models for this era of great power competition, Vice Chief of Naval Operations Adm. Robert Burke told USNI News today.

Speaking at the Military Reporters and Editors annual conference, Burke said that OFRP had been written in 2012 and was optimized for a different world than the Navy operates in today. With two major near-peer competitors in the world and ship maintenance yards that are struggling with aging infrastructure and inexperienced workforces, a new model may be needed, the VCNO said.

“We understand why the carriers are in the situation they’re in. OFRP was designed – the O in OFRP stands for optimized – it was optimized in 2012 around some different objectives. So we recognize that we have to take a good hard look at it,” Burke said.
“We started that look last July, and Admirals Grady and Aquilino, the two fleet commanders in the Atlantic and the Pacific, owe CNO an answer on that here in the coming months. But we are very open to making changes to that readiness plan, and we’ve taken it down to the fundamental assumptions and principles of it, and what do we have to do differently.”

OFRP is a 36-month cycle built around about six or seven months of maintenance work, followed by six months for basic and integrated training, a primary deployment of about seven months, and then a “sustainment” or “surge” phase to round out the three-year cycle, where the carrier strike group retains its high readiness and could deploy a second time or surge forward for a contingency if called upon by national leaders.

However, the yards that maintain carriers – especially the Norfolk Naval Shipyard on the East Coast – are backed up with carrier and submarine repair work, and maintenance availabilities are being estimated at much longer lengths due to the backlogs there. For instance, USNI News previously reported that USS George H.W. Bush’s (CVN-77) ongoing maintenance availability should last 10-and-a-half months, but it is scheduled for 28 months due to yard capacity.

Overall, four of the Navy’s 11 aircraft carriers are totally out of the OFRP cycle altogether: USS George Washington (CVN-73) and USS John C. Stennis (CVN-74) are in or about to go into their mid-life refueling and complex overhauls, respectively; USS Gerald R. Ford (CVN-78) is wrapping up its post-shakedown availability but will still need to go through full ship shock trials typically done to first-in-class ships, followed by another maintenance period, before it can start working up for a maiden deployment likely in 2024; and Bush is at the front end of its planned 28-month availability at Norfolk Naval Shipyard. Another carrier on the West Coast, USS Carl Vinson (CVN-70), is in a lengthy docked maintenance period, but the Navy has declined to comment on how long the availability was planned for.

Of the 11 carriers, just two are deployed today: USS Abraham Lincoln (CVN-72), which has been deployed for seven months already and will remain on station until a replacement can relieve it, Burke said, and USS Ronald Reagan (CVN-76), which is the forward-deployed carrier in Japan.

Burke called for improvements to the maintenance capability of the Navy’s public shipyards that work on nuclear-powered aircraft carriers and submarines, but he also called for a change in the way the Joint Force deploys carriers.

“We are having discussions with the rest of the Joint Staff and the secretary of defense on this very issue. They all understand how it got here, but they’re working with us to do better going forward,” he said.

“And part of that is, you can’t use up that wartime capacity for things short of war, and wish you had it when you need it later. So we’re going to have to do a little bit of an appetite-suppressant on how many carriers we’re able to provide. There’s not one combatant commander on the planet on the U.S. side who will tell you they don’t need a carrier – or carriers, as the case may be. So they’re very much in demand, and I don’t think that’s much in contention right now. But how do you improve the availability? Part of it will be these maintenance actions, the overhaul that we’re doing in the processes and getting more efficient there. And then if we can come up with a different operating model to generate that readiness more efficiently, we’ll definitely be looking at that hard.”

Over the last decade, “we were using up the lives of the ships and the airframes faster than they were designed for, and we had less time for maintenance, and that stuff kind of piled up,” he said. Sequestration and CRs “all affected our ability to pay for the maintenance, the parts and fuel, to expand shipyard capacity, and train people. So that’s why we are where we are right now.”

Burke said funding has been more adequate since 2017 and “we’re in a much better place now than we were in 2017,” but the Navy still can’t come close to providing all the carriers that combatant commanders want – and, Burke suggested, they shouldn’t necessarily try to.

Asked by a reporter about presence in the U.S. Indo-Pacific Command, Burke said that INDO-PACOM Commander Adm. Phil Davidson is on the record saying he needs more submarines, more amphibious ready groups, and more carriers.

“That’s again sort of a sign of where we are with current readiness and then also having the challenge of preserving some future readiness for those sort of war contingencies. It’s always a balance between those two things: how much are you going to put towards being there today versus what might happen tomorrow and you wished you hadn’t used it up.”

Noting that, in today’s world, the calculus comes down to peacetime presence missions today versus possible higher-end combat tomorrow, he said, “we’re definitely balancing the use of those forces carefully.”