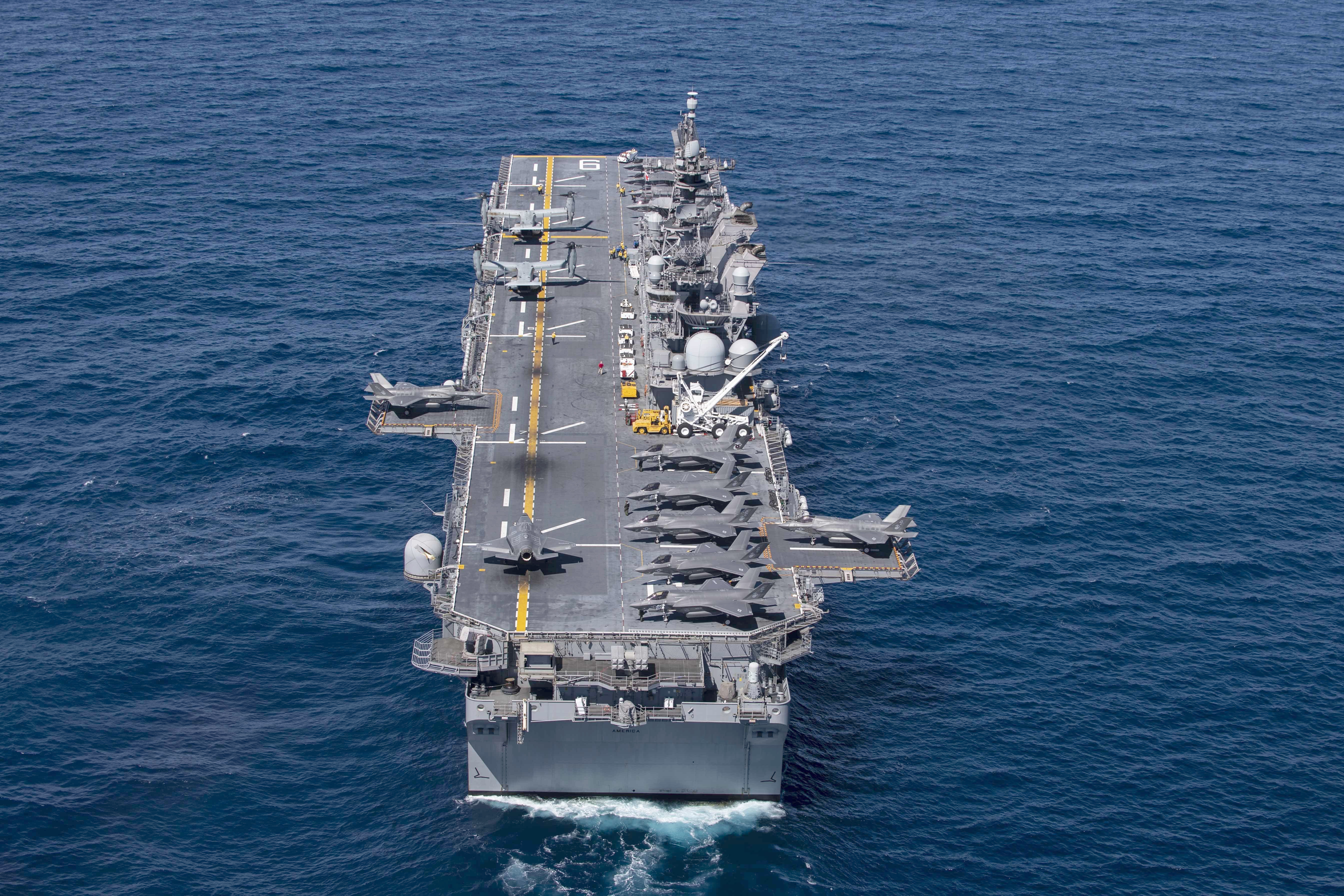 The Navy and Marine Corps recently tested out the “Lightning Carrier” concept of packing an amphibious assault ship with F-35B Lightning II Joint Strike Fighter jets, and they will likely continue to expand and exercise this capability.

On Oct. 8, USS America (LHA-8) was photographed with 13 F-35Bs from Marine Fighter Attack Squadron (VMFA) 122 on its deck. America is one of two aviation-centric amphibious assault ships in the fleet, eliminating a well deck from its design and instead using that vast space for aviation maintenance areas, greater jet fuel storage and more.

Knowing that America and sister ship Tripoli (LHA-7) would have the capability to support so many F-35Bs, the services have long talked about the Lightning Carrier concept as a capability that would be useful in a high-end fight. The jets’ stealth, ability to collect and distribute vast data and strike targets would make them ideal for the opening of a fight: they could come off a ship at sea and take out enemy defenses with jamming and missiles, collect information and share it with the rest of the fleet at sea and Marines on the ground or heading ashore.

Still, though the jets routinely operate on the forward-deployed big-deck in Japan and have conducted a deployment from the U.S.-based Essex Amphibious Ready Group, operating so many at once is much different than previous operations with about six jets onboard and supplemented by tiltrotors and helicopters. 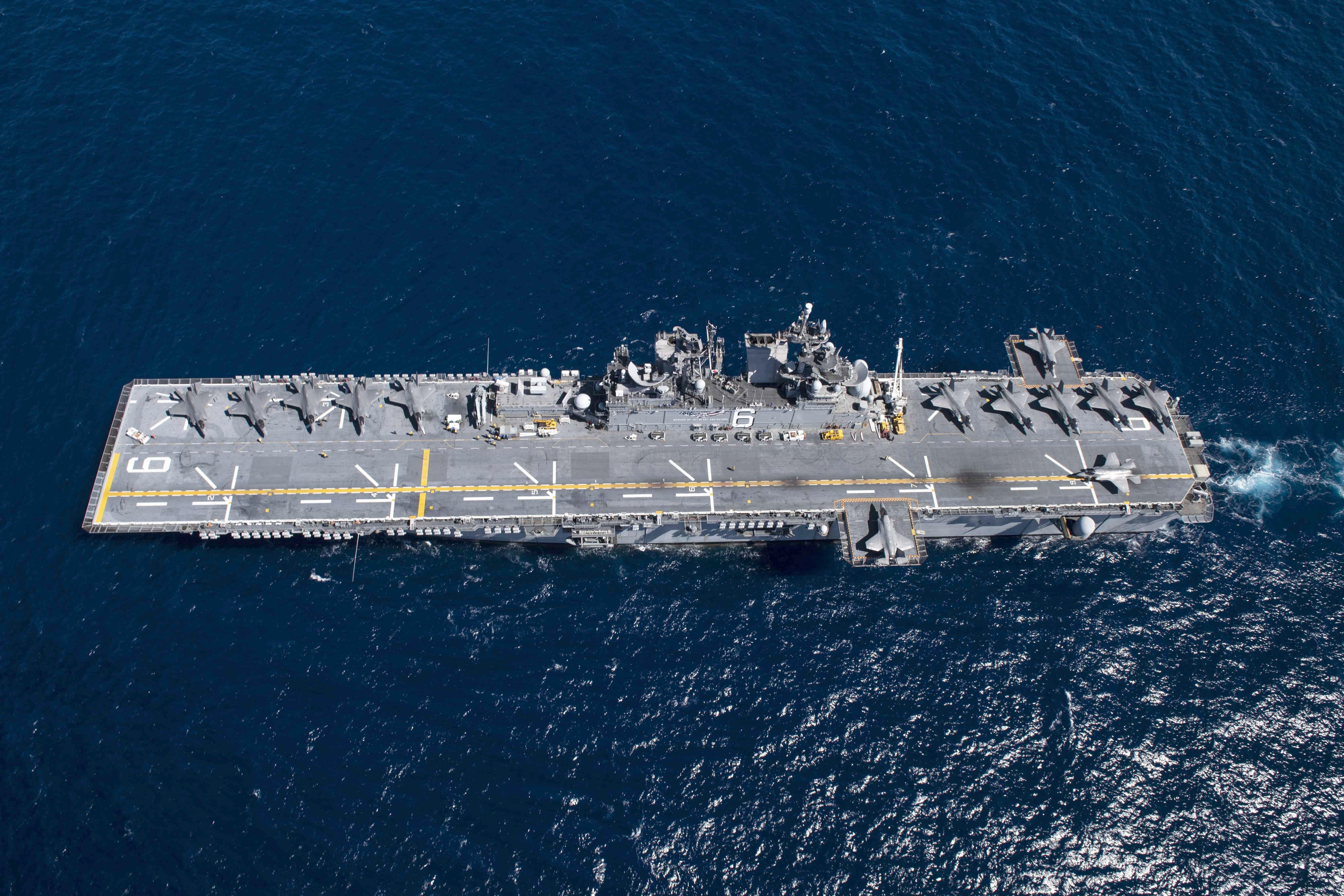 “The training went exceedingly well. We were able to sustain a high sortie rate, with a high condition of readiness, while interoperating with multiple ships and aircraft across a range of mission sets,” Lt. Col. John Dirk, the commanding officer of VMFA-122, told USNI News in a statement.

The Lightning Carrier test comes after VMFA-122 conducted carrier qualifications on America with 12 jets last month, though this month’s experiment was more sustained and grueling to test the limits of the Navy-Marine team rather than to simply certify pilots to land on and take off from a ship at sea.

“To fight together we have to train together, and there is no better Navy-Marine Corps training than living together, briefing together, and flying off of Navy ships where we can strengthen our relationships, mature our tactics, and exercise the capabilities of the present for the challenges of the future,” Dirk continued.
“This was the deployment of the largest number of F-35s ever put to sea, and for two weeks we put sortie rates to the test, deck cycles to the test, and multi-ship control to the test, all while stressing the communication links and tactics that will make us successful in any combat environment, anywhere in the world, as a joint Navy-Marine Corps Team.”

Typically fixed-wing jets come off the amphibious assault ship and therefore are in communications with that ship throughout the mission. In this demonstration, though, both the LHA and the amphibious transport dock (LPD) each had a chance to control the aircraft at sea, 3rd Marine Aircraft Wing spokeswoman Captain Morgan Frazer told USNI News.

“Training to this standard enhances mutual support between aviation and naval platforms and helps improve tactics in the event ships are dispersed across a maritime environment,” she added. 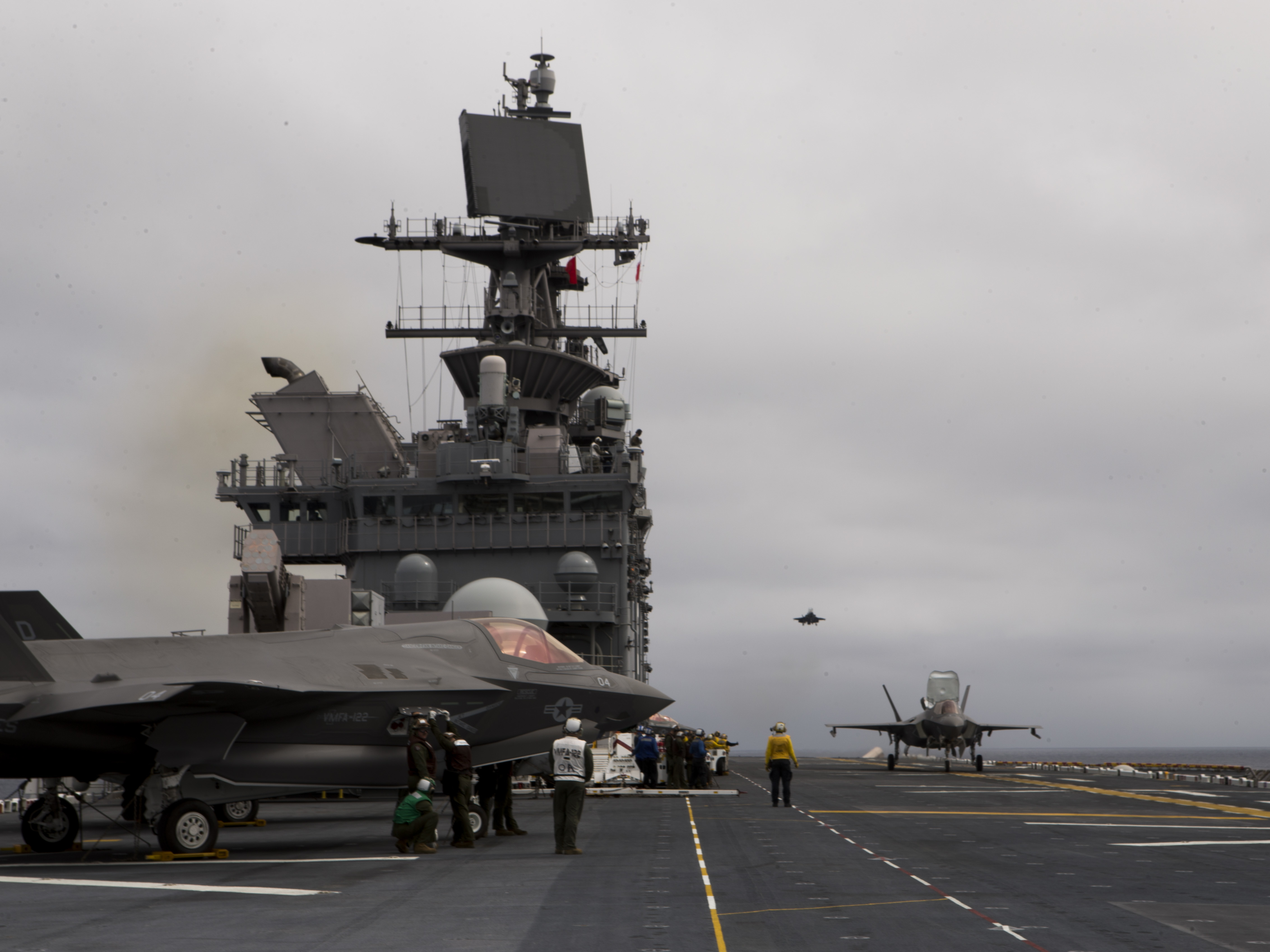 As the Marines have stretched their legs operating the F-35B at sea, a recurring concern that Navy and Marine leadership have expressed is that the planes are much more capable than the LHAs and LHDs they launch from, especially when it comes to command and control, communications and data-sharing capabilities. Former director of expeditionary warfare (OPNAV N95) Maj. Gen. David Coffman said last year that “I don’t want to bring Marine Aviation down to third- and fourth-gen; I want to bring the rest of the Marine Air-Ground Task Force up to fifth-gen and exploit that technical expertise and have a fifth-gen MAGTF. The problem is, we’re having to embark a fifth-gen MAGTF on a third-gen ship, and we have to fix that.”

The San Antonio-class LPDs have a much more sophisticated command and control system than do the Wasp-class LHDs and America-class LHAs, meaning that LPDs controlling F-35Bs in flight could help the Navy better tap into the capabilities of the jet, in addition to providing more options during an operation distributed across a vast operating space. 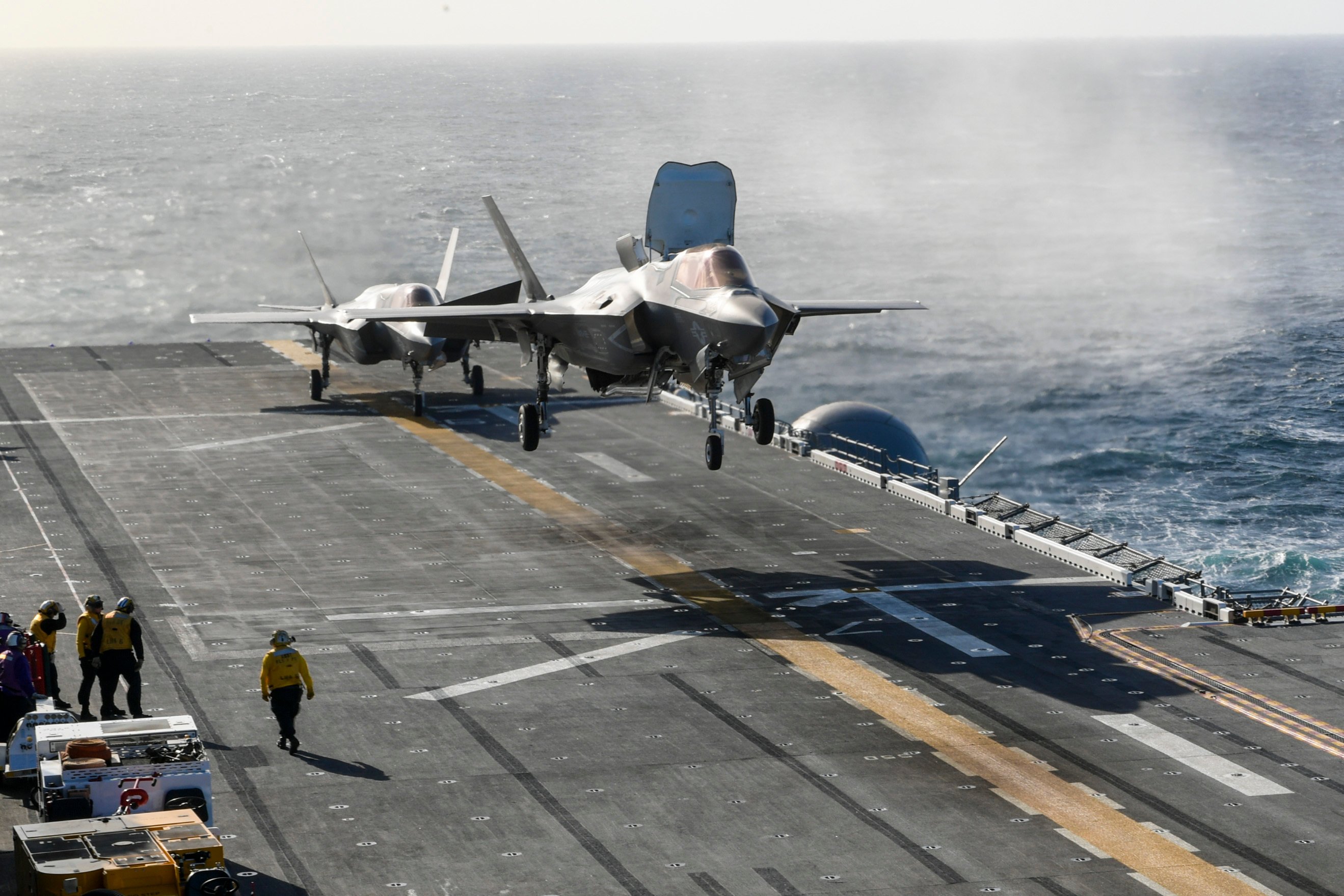 An F-35B Lightning II assigned to the “Flying Leathernecks” of Marine Fighter Attack Squadron (VMFA) 122 lands on the flight deck of the amphibious assault ship USS America (LHA 6) on Sept. 29, 2019. US Navy photo.

“About nine months ago I was looking at … USS America, a terrific amphib ship, and said, you know what, why don’t we load this thing up with F-35 Bravos, put 20 F-35 Bravos on this, and make it quote/unquote a lightning carrier,” he said today at a Brookings Institution event.

He said that the Navy and Marine Corps might “put it in a couple of exercises and know that we have that up our sleeve” going forward.

Spencer mentioned the comparison between the Lightning Carrier concept and the Navy’s aircraft carriers with a full carrier air wing.

The nuclear-powered aircraft carrier can stay out and sustain itself for longer than can an amphibious ship, and its larger flight deck and crew can support a higher tempo of flight operations. However, in terms of capability, the only thing the Marine Expeditionary Unit’s aviation component lacks compared to an air wing is an airborne early warning capability, and the Marines’ large Group 5 unmanned aerial system they will field next decade will handle that mission.

The Navy’s carrier force, however, is struggling, with readiness challenges affecting maintenance timelines and the ability of carriers to deploy as planned.

Spencer talked about the carrier force at Brookings and said the Navy is considering what would come next after the two carriers the Navy committed to buying in a two-ship deal this year. Asking rhetorically what would come next, he said, “I will tell you, we are augmenting the aircraft carrier with our ideas, such as this Lightning Carrier. 20 F-35 Bravos on a large-deck amphib. My cost performance there is tremendous. Does it have the same punch? No, it doesn’t, but it does have a very interesting sting to it.” 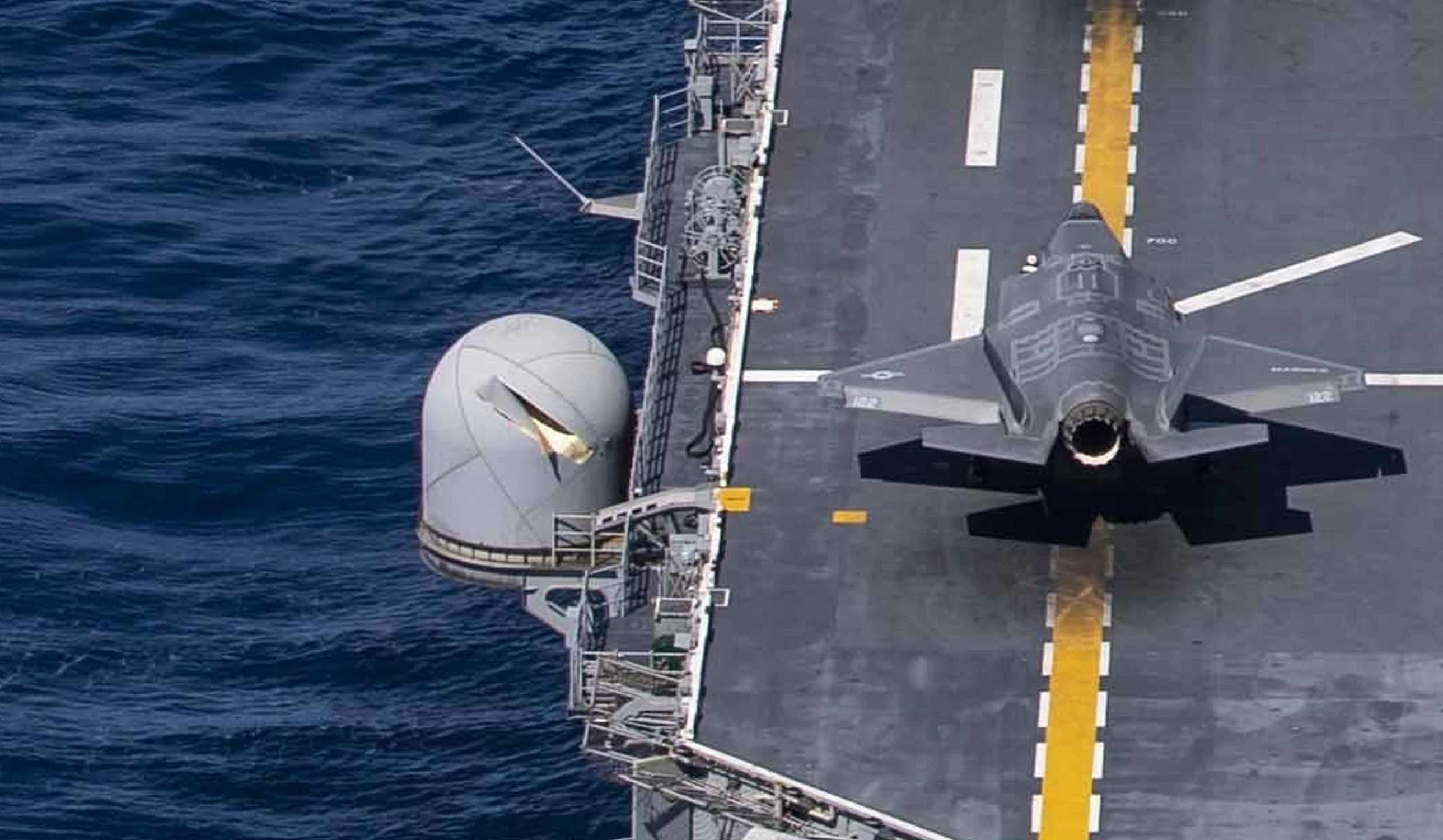 The Drive previously reported on the Lightning Carrier test earlier this month and noted that a ship satellite dome near the flight deck had been damaged. The article suggested that the heat from the F-35Bs had caused the damage, but the Navy told USNI News that was not the case.

“The apparent damage to the radome aboard USS America (LHA 6) occurred as a result of a previously-known materiel issue exacerbated during routine training operations. There is no indication the increased wear was a direct result of shipboard or flight operations, and it did not result in a degradation of shipboard systems or capabilities,” U.S. 3rd Fleet spokesman Cmdr. John Fage told USNI News.