This post has been updated with additional information from the Navy.

While the carrier will work through the remaining tasks to certify aircraft for the new launching and recovery systems, test radars and other systems, the service will still be exorcising the gremlins from the Advanced Weapons Elevators aboard Ford. The carrier will be likely short nine certified weapons elevators as the service works to integrate the new technology into its next generation of aircraft carriers.

“We have several more elevators that are close, but there are no guarantees,” Navy spokesman Capt. Danny Hernandez told USNI News following an earlier version of this post.
“We have numerous days in October to continue the work. The team continues to work hard.”

The AWEs are based on the same technology that powers high-speed magnetic levitation trains. The system eschews cables found aboard most standard elevators for high-powered permanent magnets that are computer-controlled. The Navy believes the underlying concept is sound, the problems now being corrected are rooted in integrating the elevators aboard the carrier.

“Due to the concurrent nature of development and construction, the shipboard AWEs have been test beds for identifying many of the remaining developmental and production issues for this first-in-class system, including issues with producing the tight tolerances required for the impacted doors and hatches,” Hernandez told USNI News in a statement.
“These issues have required physical adjustments and software refinement to make AWE operations sustainable and reliable.”

Correcting and debugging the AWEs have become a time-consuming problem for the service as it hustles to prepare Ford for sea.

Earlier this year, USNI News reported the year-long post-shakedown availability (PSA) for Ford was extended by three months to correct the issues with the elevators and problems with the ship’s nuclear propulsion.

“All three of those causal factors – making the adjustments to the nuclear power plant that we noted during sea trials, fitting in all of the post-shakedown availability workload and finishing up the elevators – they’re all trending about the same time,” James Geurts, assistant secretary of the Navy for research, development and acquisition told Congress in March.

Geurts said at the time that there would still be some elevators not operational when Ford returned to Norfolk.

The elevators are one of several new technologies that were inserted in the first-in-class carrier that were included in the design that would reduce the crew size while increasing the amount of aircraft that could be launched and recovered.

However, continued delays in delivery and a cost increase to $13 billion have made Ford a popular target for criticism in Congress.

“The Navy entered into this contract in 2008, which, combined with other contracts, ballooned the cost of the ship to more than $13 billion without understanding the technical risk, the cost or the schedules, Senate Armed Services Committee chair Sen. Jim Inhofe (R-Okla.) said in July.
“This ought to be criminal.”

Earlier this year, Secretary of the Navy Richard V. Spencer told an audience at the Center for New American Security that he had made a handshake agreement with President Trump on the sidelines of the Army-Navy football game.

“I shook his hand and said, the elevators will be ready to go when she pulls out or you can fire me,” Spencer said in January. 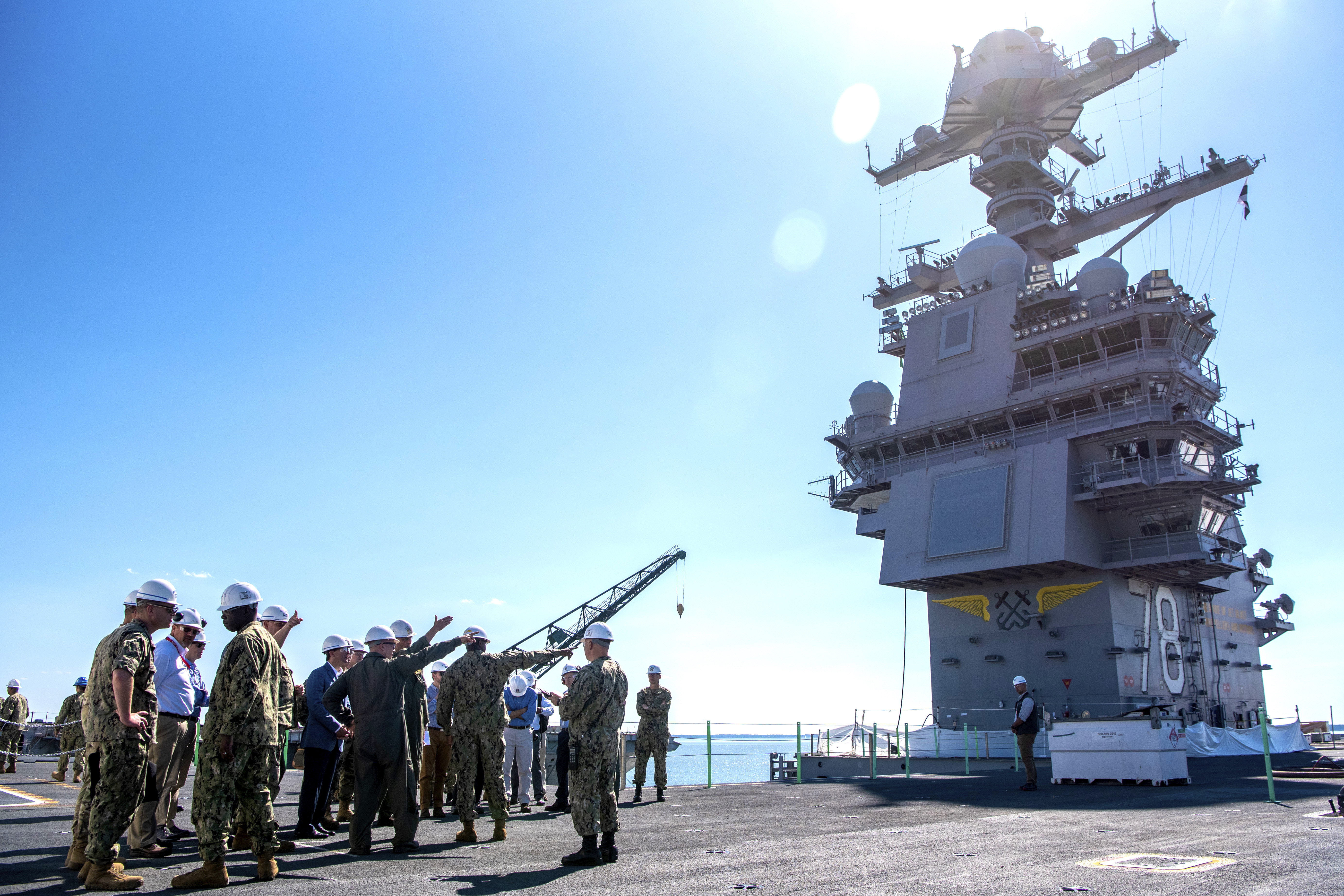 In a statement to USNI News, a Spencer spokesperson said he, “remains fully committed to USS Gerald R. Ford, to her crew, and to the technology employed aboard the ship. He looks forward to seeing Ford underway later this month. The Navy and ship’s crew have diligently tackled issues and will continue to do so. All are eager to demonstrate Ford’s capacity to deliver combat power. There is more work to do, but the crew and ship are ready to go to sea, and the Secretary is proud of their efforts.”

In May, the Navy announced it was building a land based test site for the AWEs that would be completed in 2020.

While the site will help the under-construction John F. Kennedy (CVN-79) and Enterprise (CVN-80), it won’t come online in time to help correct issues on Ford.