The Navy is building a ground-based test site for the weapons elevators currently going through a difficult installation and certification process on carrier USS Gerald R. Ford (CVN-78), though it won’t be ready in time to allay the problems on Ford.

Though Ford commissioned as a U.S. warship nearly two years ago, work to install and certify a handful of new systems has continued. To date, only two of 11 Advanced Weapons Elevators (AWE) are certified for use. All work was supposed to be done by the end of the post-shakedown availability, which was extended from June to October of this year, but the Navy made clear this week that elevator work would remain after the ship leaves its PSA.

Navy acquisition chief James Geurts, who toured Ford May 29, “is feeling good about new technology aboard Ford, with the exception of the remaining Advanced Weapons Elevators (AWE) that require further production and testing following the conclusion of PSA. Currently, there are two of eleven AWEs turned over to the ship, and the focus of effort between now and the fall is on the shipbuilder and fleet to prioritize the necessary work required so the carrier can functionally operate the existing schedule without impact,” Geurts’ spokesman, Capt. Danny Hernandez, told USNI News today.

“In parallel, the Navy is constructing a land-based test site at Naval Surface Warfare Center Philadelphia, and had contracted for the production, test and delivery of system components to complete the site in 2020,” Hernandez added.
“The Navy and shipbuilder are also completing a full digital twin co-located at the shipyard facility in Newport News that will be complete in Fall of 2019. Both systems will allow the Navy and shipbuilder to mature the technology and aide in troubleshooting.”

The Ford-class carrier has five significant new technologies in its design, several of which have experienced developmental challenges along the way. The two that gained the most attention – the Electromagnetic Aircraft Launch System (EMALS) and the Advanced Arresting Gear (AAG) – had the benefit of having land-based test sites to work out the kinks in the design and software while construction on first-in-class Ford continued.

EMALS was the better-case scenario, where testing at the land-based site could address remaining software bugs and allow the launching system to be installed on Ford on time. AAG was a less ideal scenario, where land testing identified a major design flaw that took two years to address. Still, ahead of the ship’s delivery to the Navy, the hardware was mature enough to install in the ship while software work continues at the land test site. The test site is still collecting all the data it needs to confirm that AAG can safely arrest all the aircraft currently in a carrier air wing, and that work should wrap up by the end of the year. 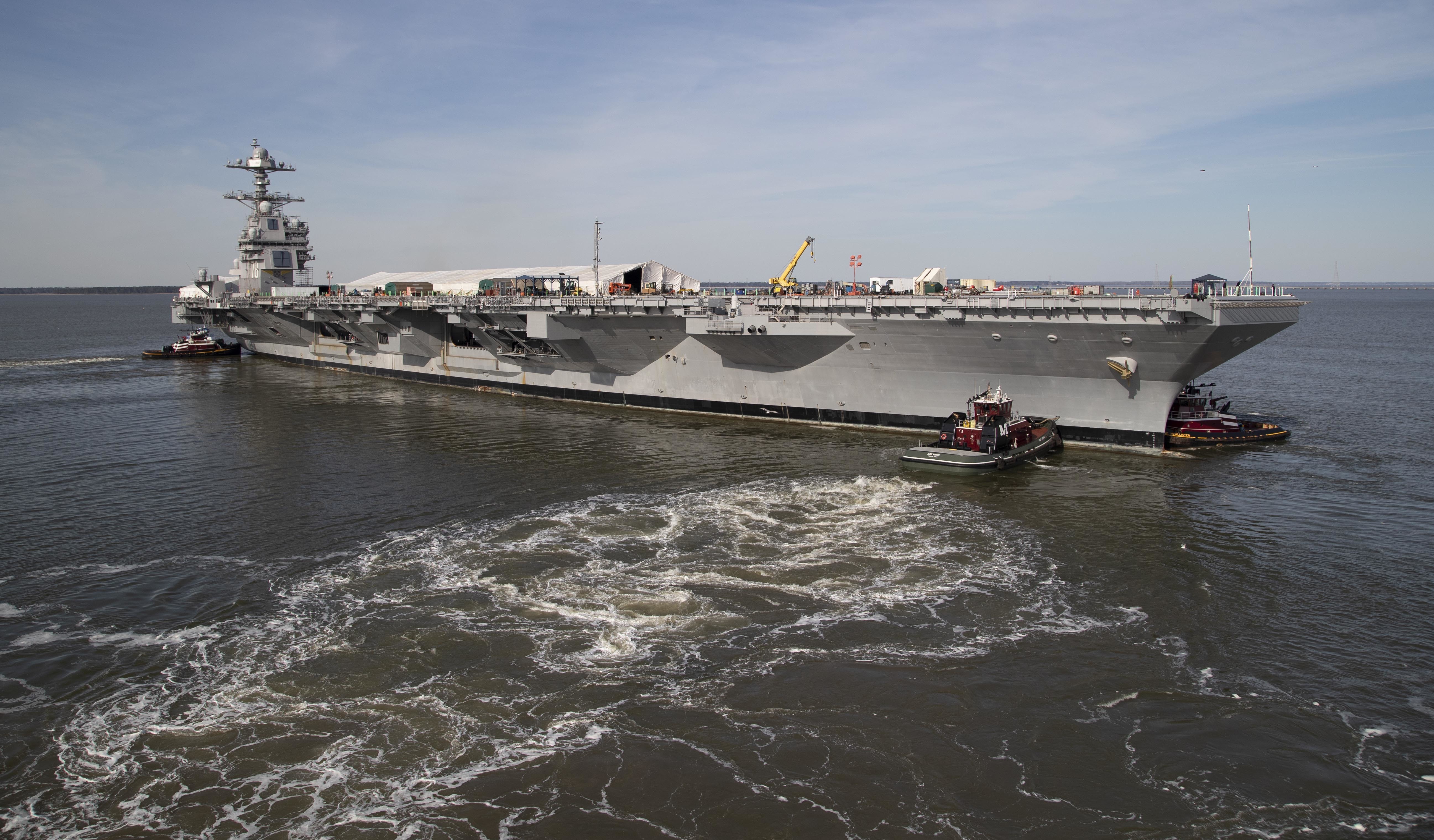 “AWE is a first-of-kind developmental system without a land-based prototype. Due to the concurrent nature of AWE development and construction, the shipboard AWEs have been test beds for discovering many of the remaining developmental issues that have delayed the scheduled turnover to the crew,” Hernandez said.
“These issues have included physical adjustments and software refinement that are required to make AWE weapons movement sustainable and reliable.”

Though the elevators aren’t the sole reason the PSA yard availability will go over schedule – issues with the nuclear propulsion system, as well as deferred work the Navy and shipbuilder chose to address during PSA, have also contributed to schedule delays – Navy leadership have said AWE is a factor.

Senate Armed Services Committee Chairman Sen. James Inhofe (R-Okla.) said in a statement this week that “further delays on the USS Gerald R. Ford advanced weapons elevators are disappointing – and present a dangerous readiness gap. This is a letdown for our fleet and for the taxpayer, and is why the [Fiscal Year 2020 National Defense Authorization Act] includes stronger oversight for the key systems on the Ford, including the elevators and launch system. We need to get it fully operational as soon as possible.”

SASC staff did not elaborate on what those oversight measures would be. SASC’s version of the NDAA passed a committee markup and vote last week, but the language has not yet been released.

Hernandez said that, though the AWE land-based test site won’t be up and running in time to help Ford, it will be responsible for working with the elevators that will go on later ships in the class, as well as testing any software upgrades or troubleshooting future issues that arise.