WASHINGTON, D.C. – For the next several years, the Coast Guard’s only heavy icebreaker will lead the annual Antarctic resupply mission as the service develops its new class of icebreaker.

Called the McMurdo Breakout, the Coast Guard’s heavy icebreaker, USCGC Polar Star (WAGB-10), starts the journey to Antarctica every year at the end of October or early November. Once there, Polar Star breaks a channel through the sea ice so resupply ships can reach McMurdo Station, the National Science Foundation’s 164-acre research facility perched on the volcanic Ross Island in the Ross Sea.

In about a week, Polar Star is expected to leave drydock in Vallejo, Calif., return to its homeport Seattle for some final preparations, then in about a month, depart for the McMurdo Breakout, Lt. Cmdr. Stephen Brickey, a Coast Guard spokesperson told USNI News.

Typically, the breakout involves a fuel ship and a container ship – a lifeline arriving once a year with the material needed to keep the station and field research operating for the year, said Scot Arnold, a senior advisor for the National Science Foundation’s Office of Polar Programs. Arnold was speaking recently at the American Society of Naval Engineers Arctic Day 2019 conference.

“The Polar Star, it clears a channel for the two ships,” Arnold said. “You have to have the heavy icebreaker there to clear ice. It can be up to a 70-mile channel.”

When all turbines on Polar Star are running, the icebreaker is an incredible machine, said Capt. Michael Davanzo, the Coast Guard’s chief of Cutter Forces, at the Arctic Day conference. The problem with Polar Star is it’s more than 40 years old and a challenge to keep operational.

In April, the Coast Guard awarded the $745.9 million contract to build its first of three planned Polar Security Cutters, the new class of heavy icebreaker to replace Polar Star. The Coast Guard expects delivery of the first PSC in 2024.

“With Polar Star, our goal is to keep the cutter running through the delivery of the second PSC and to do that we have to do a service life extension which we think will take three to five years,” Davanzo said. “We have to try to do without missing a mission down to Antarctica.”

Weather conditions in Antarctica and the expense of sending ships to the bottom of the world give the Coast Guard and the National Science Founding one chance at making the annual resupply mission. The McMurdo Breakout is timed for the height of the Antarctic summer at the end of December when high temperatures barely rise above freezing, but the sea ice can be broken, Arnold said.

The fuel tanker arrives with close to 10 million gallons of a special fuel mixture designed for use in Antarctica. The container ship arrives with bulk goods such as food, scientific equipment, vehicles and other material.

This year, and for several more, the container ship will also deliver the construction material used to build a massive new $355 million research facility that will fold the activities performed in 104 buildings into a condensed campus of six main structures, Arnold said. 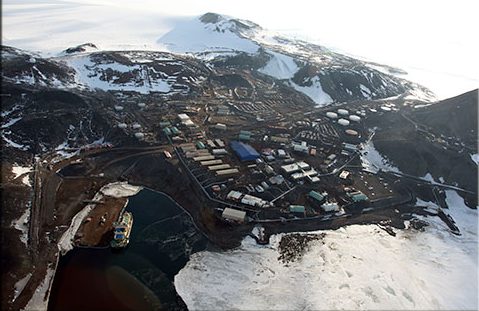 Aerial view of McMurdo Station, which sits along the shoreline of Ross Island, a volcanic island in the Ross Sea. National Science Foundation photo.

Called the Antarctica Infrastructure Modernization for Science project, work is starting now and is expected to finish in 2026. Weather conditions limit the construction season to between October and April. Then the long, frigid Antarctic night sets in, halting outside work.

Antarctica’s weather conditions also create a logistics challenge for such a large construction project. With supplies arriving once a year, in the middle of the construction season, Arnold said builders have to collect supplies a year ahead.

“We’re collecting materials now for the ‘20 season. They’ll be put on a ship and delivered to Antarctica in January,” Arnold said.

Without the Coast Guard’s heavy ice breaker, though, these supplies can’t reach McMurdo station, which would severely delay the carefully timed build. As sections of the new facility are built, work will migrate into the new structure. Crews will then demolish older structures, which in some cases are standing in the way of the project’s final sections.

Once the materials arrive, the builders only have enough time to unload the ships and move most of the material to a storage field. When the construction season ends in April, the team will start sorting and prepping next year’s building supplies.

“It gets off-loaded then dumped because we don’t have the space to go through everything nor the manpower, so it all goes to a central receiving field,” he said.

When finished, the new McMurdo station will save the National Science Foundation millions of dollars in operations and maintenance costs while also improving the living and working conditions for staff, with a relatively open and flexible floorplan to accommodate future research projects, Arnold said.

“It’s basically taking our old facilities, which have been around, in some cases since the fifties, from what really represents more of an expeditionary type construction, and bringing it into the future, for the next 50 years,” Arnold said.