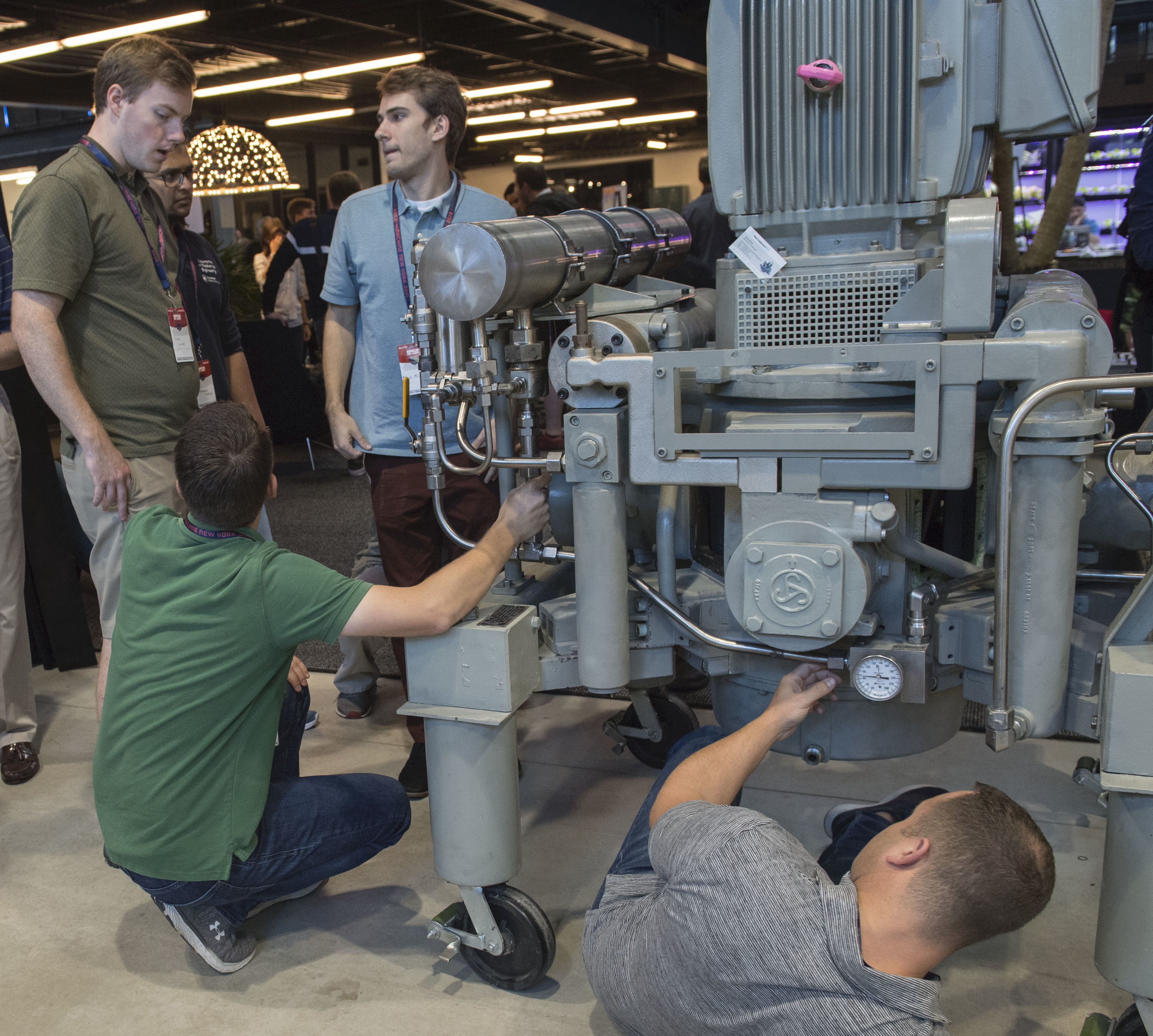 A team of participants working on the high-pressure air compressor during Hack the Machine competition at the Brooklyn Navy Yard in New York City on Sept. 7, 2019. US Navy Photo

NEW YORK – Two years ago, the Navy invited a group of civilian data experts to study how the service could better predict maintenance on surface ships. A short time into the exercise at MIT, a major problem popped up – the data was bad.

For Zac Staples, the revelation wasn’t embarrassing; it proved a point.

“The insight coming back from some of the best data scientists in the world is, your data collection is no good,” Staples, a former surface warfare officer and CEO of Fathom5, told USNI News.
“We could have spent years and millions looking at data analytics … and not realized that it was a data quality problem to start with. We found that out in one weekend.”

Looking at problems differently is the whole point of HacktheMachine, a program that began in 2016 to throw some of the most complicated systemic issues the Navy has at civilians with little, if any, connection to the military.

Based on the strength of the lessons from the MIT weekend, the Navy retooled how it’s gathering data from its ships at sea to create a better data set as it faces an ongoing struggle with maintenance on its surface and submarine fleets.

This month’s Hack the Machine in New York had more than 500 civilians take a shot at helping the Navy solve the most persistent problems. Problems addressed this year include how to predict maintenance needs, integrate new technology into the fleet and effectively protect against cyber-attacks. 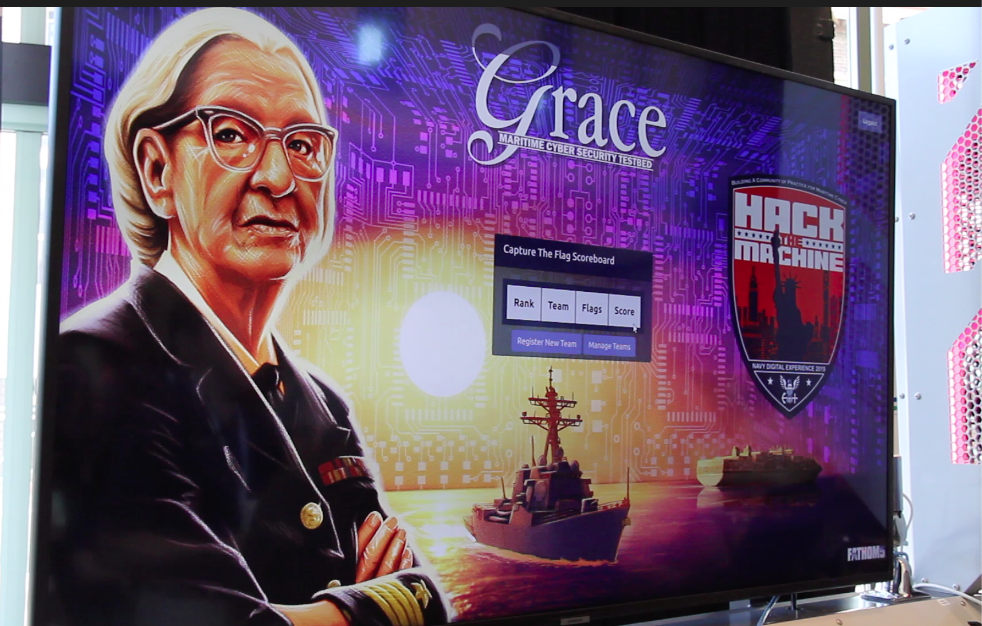 “Most people have no idea about the systems that we have on our ships,” Rear Adm. Lorin Selby, NAVSEA’s chief engineer, told USNI News. “Now, some of that’s for good reason, of course, but some of the problems we have are very common [to] what you see on airplanes, on commercial ships, in your car, in other complex systems out there.”

The trio of challenges in this year’s event had participants crunch through recently declassified F/A-18 Hornet maintenance data to predict aviation repair needs; use digital cameras and a 3D printer to repair an air compressor brought in for the event; and a SWO’s worst nightmare: a group of computer specialists elbow-to-elbow working to compromise a ship’s control systems with the goal to take control of the ship remotely.

“We have a lot of aircraft, a lot of ships. We need to keep them up in flying. We’ve got new technology like 3D printers, and we want to keep our systems safe,” Tim Barnard, NAVSEA’s deputy technology officer told USNI News. “These problems today are on actual or representative Navy systems. The work that we’re doing here today lets us take that back into our engineering efforts with our government folks as well as our industry partners, show what we’ve come up with today, and then we can apply that directly to ongoing challenges in the fleet.”

For example, a major challenge looming is how ships underway might use additive manufacturing in the future. Perched in the middle of a concrete floor of host New Lab’s space at the Brooklyn Navy Yard was a large, broken air compressor teams had to repair.

“There’s a lot of sort of promise around digital thread technology and additive (manufacturing) and what you could do with basically a floating micro-factory at sea,” said Kat Dransfield, a Navy veteran with California-based company Launch Forth.
“The questions we’re trying to answer with this track are, what would it actually look like for sailors to repair a damaged ship at sea while working with remote designers and engineers to actually create the engineering specs for the tools, the workarounds, the replacement components that you would actually need?” 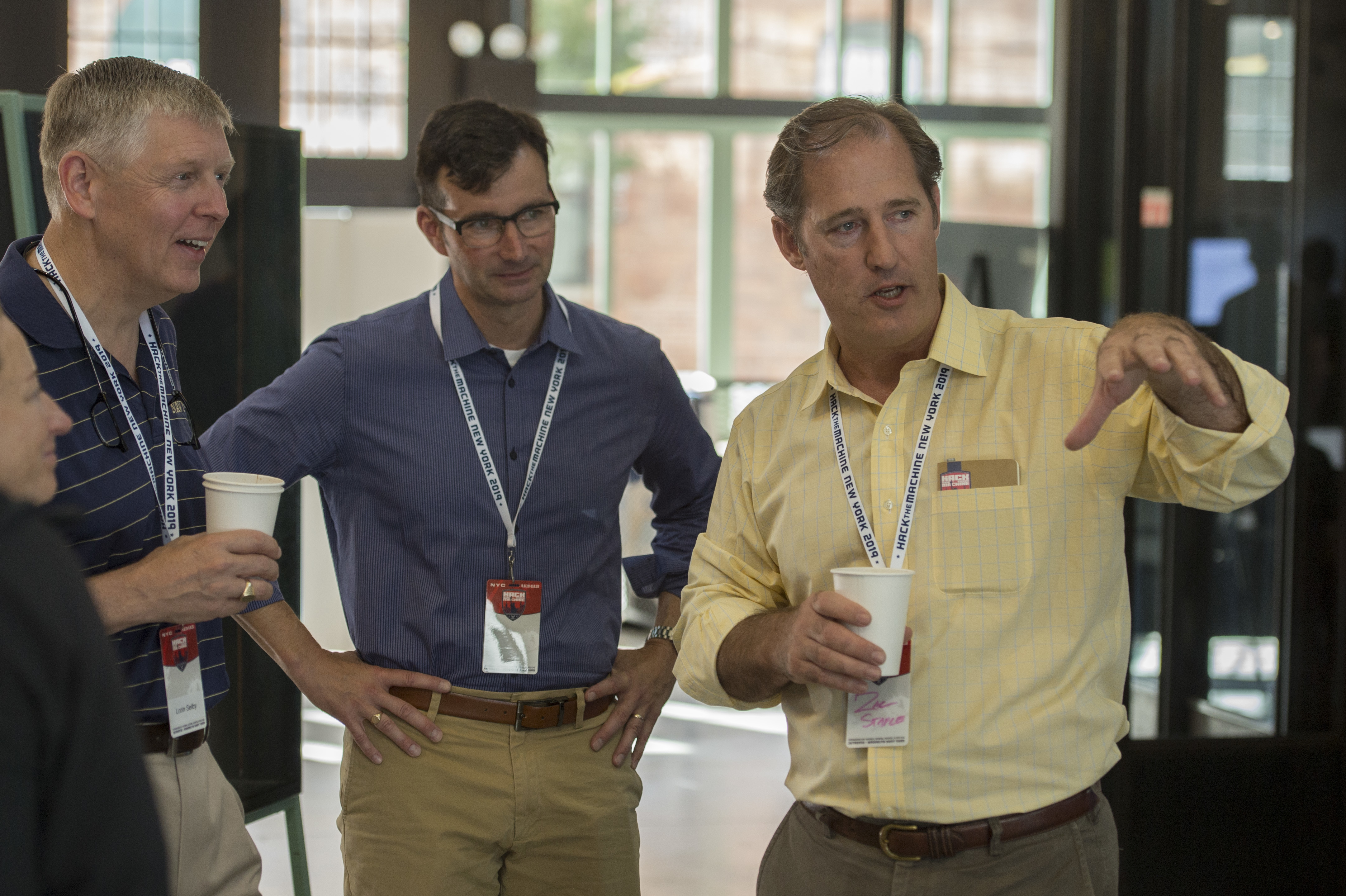 The Navy isn’t sure yet what skills a sailor would need to diagnose a problem at sea, communicate the information back to shore and implement instructions from the engineers off the ship. As part of the recent test, the teams working on the compressor itself were separated from the engineers developing the solutions for the compressor fix. Additionally, the teams have a wide range of disciplines to work on the problem – from mathematicians to literature majors.

“Who’s actually really good at this? We think it’s going to be people who are really good at visual communication and have high spatial intelligence in three-dimensional space. So, there could be a really interesting opportunity to kind of calibrate the Navy workforce,” Dransfield said.

The ultimate point of the exercise is to show the Navy a different way of doing business, Staples said.

“This is not going to solve the process problems that are internal to the Navy culture,” he said.
“What it’s going to do is kickstart people so they can see how other agile, fast-moving teams get things done in high-reliability, high-risk industries.”

For Selby, the past success of Hack the Machine is a recognition that the Navy needs to change the way it thinks about its own challenges and look outside for help. 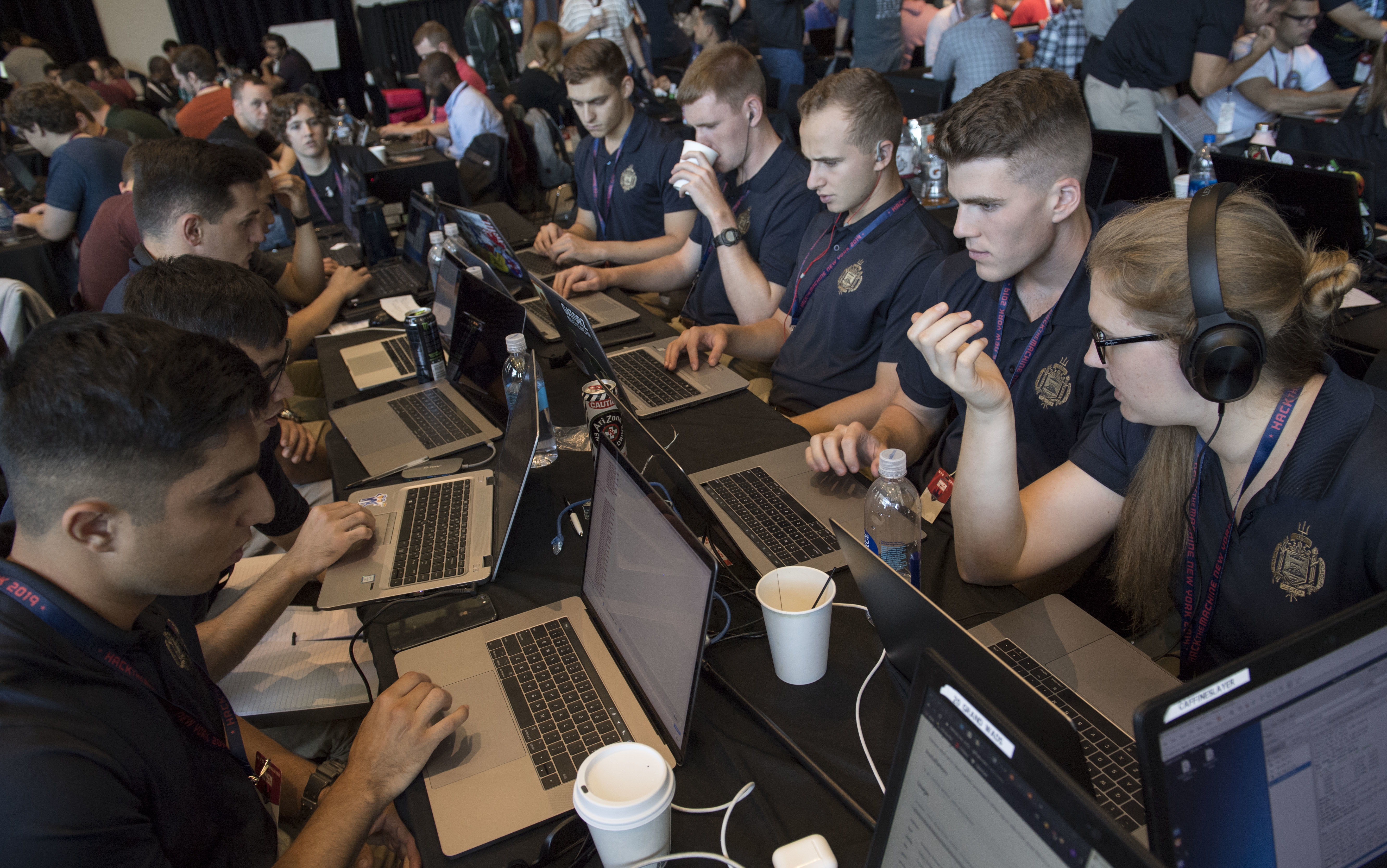 A team of Naval Academy midshipmen and Air Force Academy cadets work on a HacktheMachine problem in New York on Sept. 7, 2019. US Navy Photo

“We can no longer solve these problems without tapping into a more diverse, broad crowd of folks to help us,” Selby said. “The bottom line is that there is tremendous talent in this country, in this community, in Brooklyn, across the nation, that can help us with these problems.”