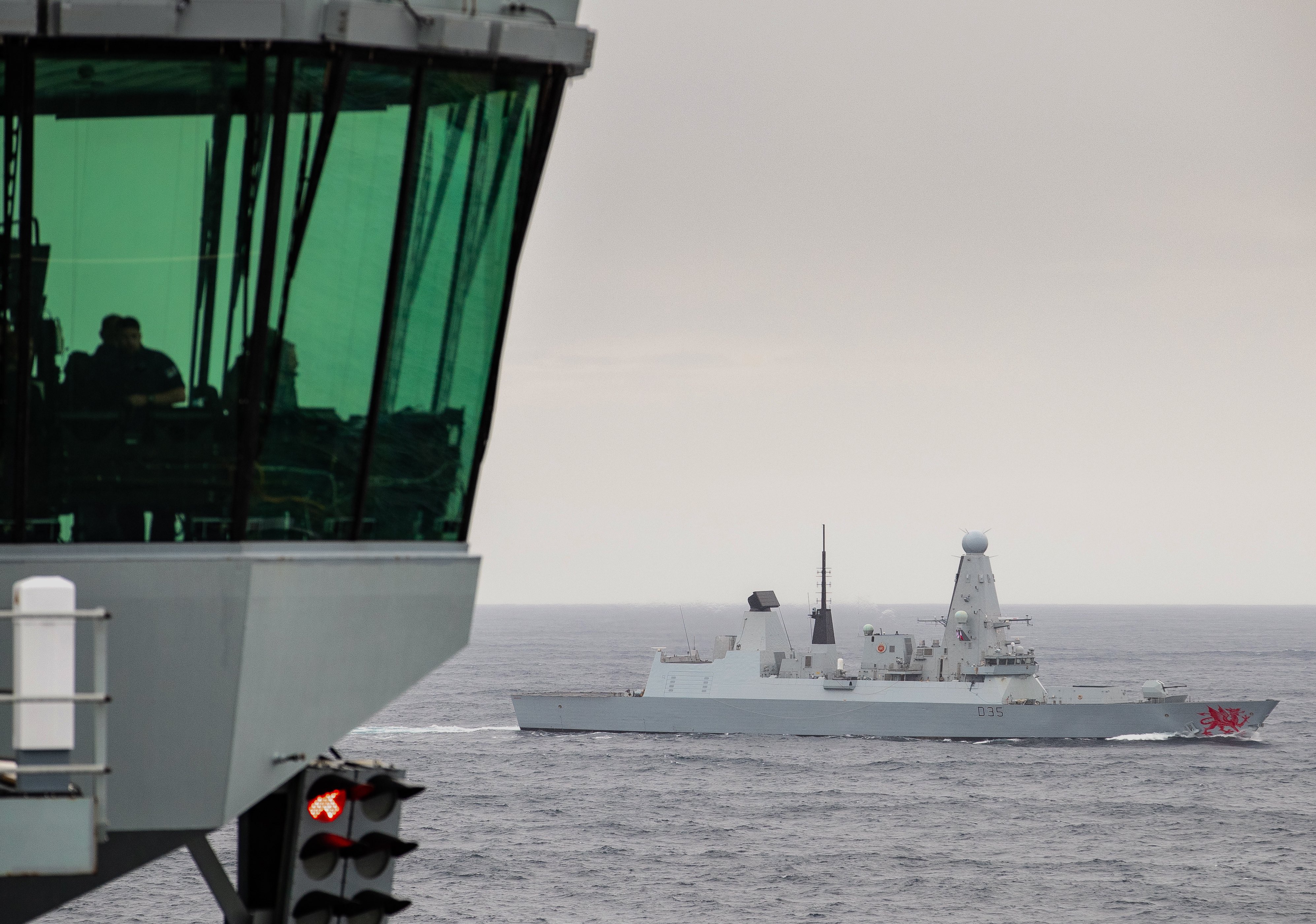 LONDON — The Royal Navy’s metamorphosis from a provider of lone warships to the world’s maritime hotspots into a service deploying carrier strike and amphibious task groups will be accompanied by an equally significant transformation in command and control (C2), according to the U.K.’s surface fleet commander.

In the most radical shake-up of its kind in a century, Rear Adm. Andy Burns forecast that large embarked headquarters will become a thing of the past.

Instead, C2 will be performed by smaller platforms using virtual networks, hardened against cyber-attack and able to function without satellite data links.

Maintaining a decisive advantage in naval operations will require capabilities “fit for the information age and in anticipation of machine-speed warfare,” he said on Thursday.

“I believe we need to change the C2 culture across the four pillars of people, processes, structures and technology.”

Addressing a naval seminar at the DSEI defense exhibition in London, Burns – who is Commander U.K. Maritime Forces and Rear Admiral Surface Ships – suggested that rank and age would become “increasingly irrelevant” in the future headquarters.

“The traditional role of commodore or admiral as the ultimate decision-maker must give way to an approach that is more to do with enabling and catalyzing,” he said. “This style of command is already beginning to shift our approach.”

“I enjoyed considerable freedom to approach the task differently because the 5th Fleet commander recognized that our response to crisis needs to be instinctive rather than controlled, and unconstrained from headquarters ashore,” he said.

“Similarly, working alongside the commander [U.S.] 2nd Fleet in the Baltic earlier this year, we undertook a rigorous assessment of the extent to which we were really exercising mission command. We wanted to ensure that subordinate commanders had the freedom to harness the intellectual capacity of their own staffs and operate with autonomy within broad commander’s intent.

“I’ll be honest: there was room for improvement. But to create and maintain the C2 ecosystem we need for the future, we need to develop a culture of independent innovation and learning through failure.”

Burns said the Royal Navy will require commanders with softer skills, such as the ability to collaborate, and quoted former U.S. Defense Secretary Jim Mattis: “In this age, I don’t care how operationally or tactically brilliant you are. If you cannot create harmony, even vicious harmony, on the battlefield, based on trust, across service lines, across coalition and national lines, and across civilian and military lines, you need to go home. Because your leadership is obsolete. We’ve got to have officers who can create harmony across all those lines.” 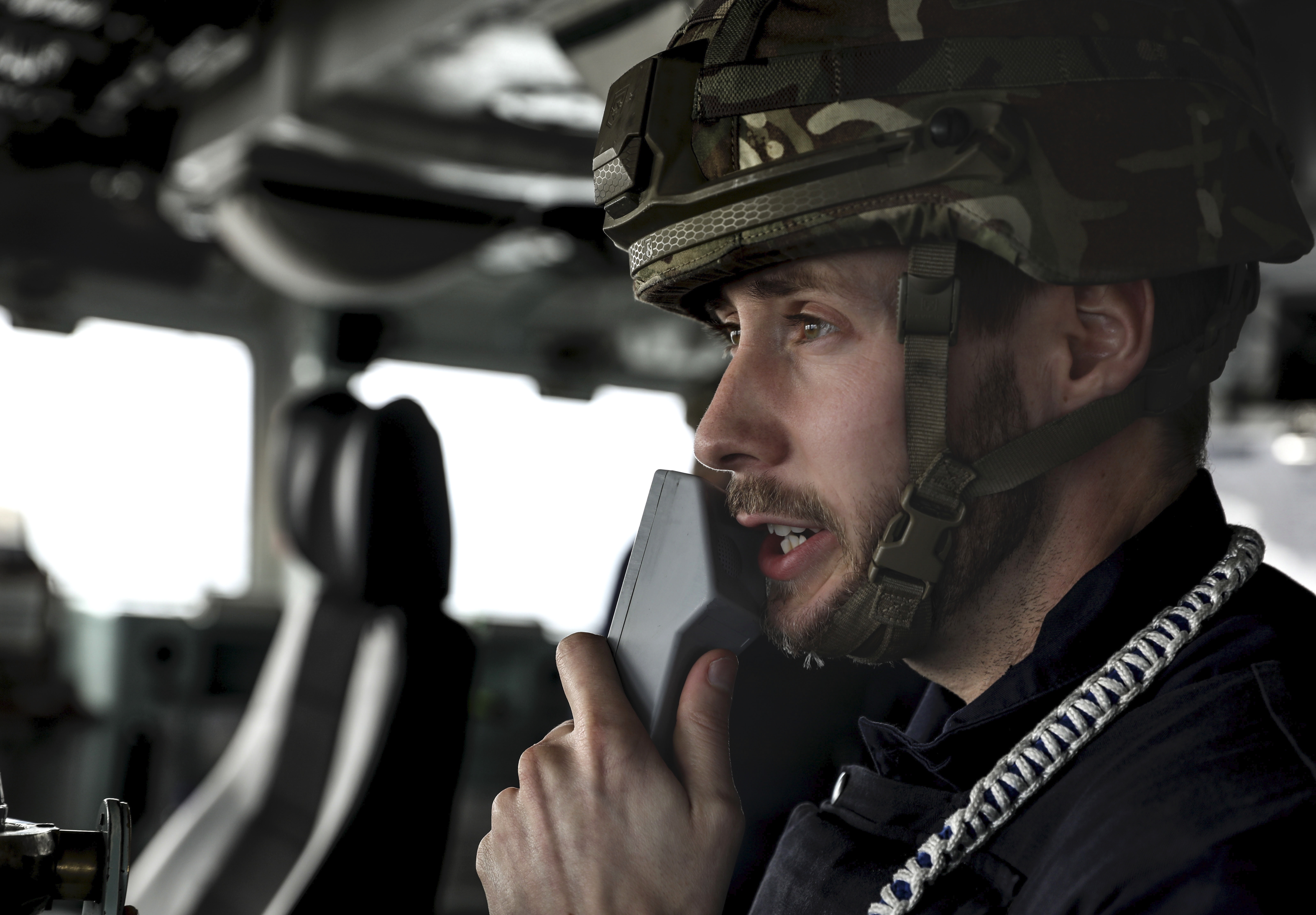 Turning to the processes pillar, Burns said those officers must try to deliver outcomes rather than a linear plan. “During Exercise Joint Venture earlier this year we confirmed how counterproductive it is to focus on the phases of an off-the-shelf plan”, he told the DSEI audience.

“Our operational design in the future will apply methodology that makes sense of the complex environment but allows constant review, with adaptive tools and techniques to make the most of emerging technology.”

As far as the command structures are concerned, Burns predicted that fixed headquarters would be replaced by virtual networks.

“The need for large headquarters to be embarked in a command platform at sea is diminishing. Lighter technology will enable a fly forward capability, making a wider range of shipping suitable for supporting C2,” he said.

The new structures must be cyber resilient, he explained, and able to operate in a C2-degraded or -denied environment (C2D2E) without access to space-based services.

Commanders would have to learn to rapidly exploit automated decision-support technologies, such as data-to-decision systems, human-machine interfaces, cloud solutions and artificial intelligence.

The U.K.’s emerging Future Force operating concept – which covers the sea, land, air, space and cyber domains to 2035 – describes how C2 will undergo “the most fundamental program of reform for over 100 years,” Burns said.

“The potential for providing secure cloud-based data, connectivity and AI support will lead to a reduction in the size of our deployed headquarters and drive a revision of the methods that currently underpin mission command.”

The RN was responding swiftly to the new requirements, he said. Its recently established MarWorks information warfare technology accelerator “has already delivered some spectacular results” including C2D2E-resilient networks and low size, weight and power services.

He also noted the development of fifth-generation cloud-based technologies and said tethered unmanned air systems and Helikite aerostats could be employed for reach-back C2.

“The Royal Navy is responding to the changing character of maritime conflict and adapting its approach to C2. Only by doing so, at an ever-increasing pace, will we retain the ability to fight and win.”