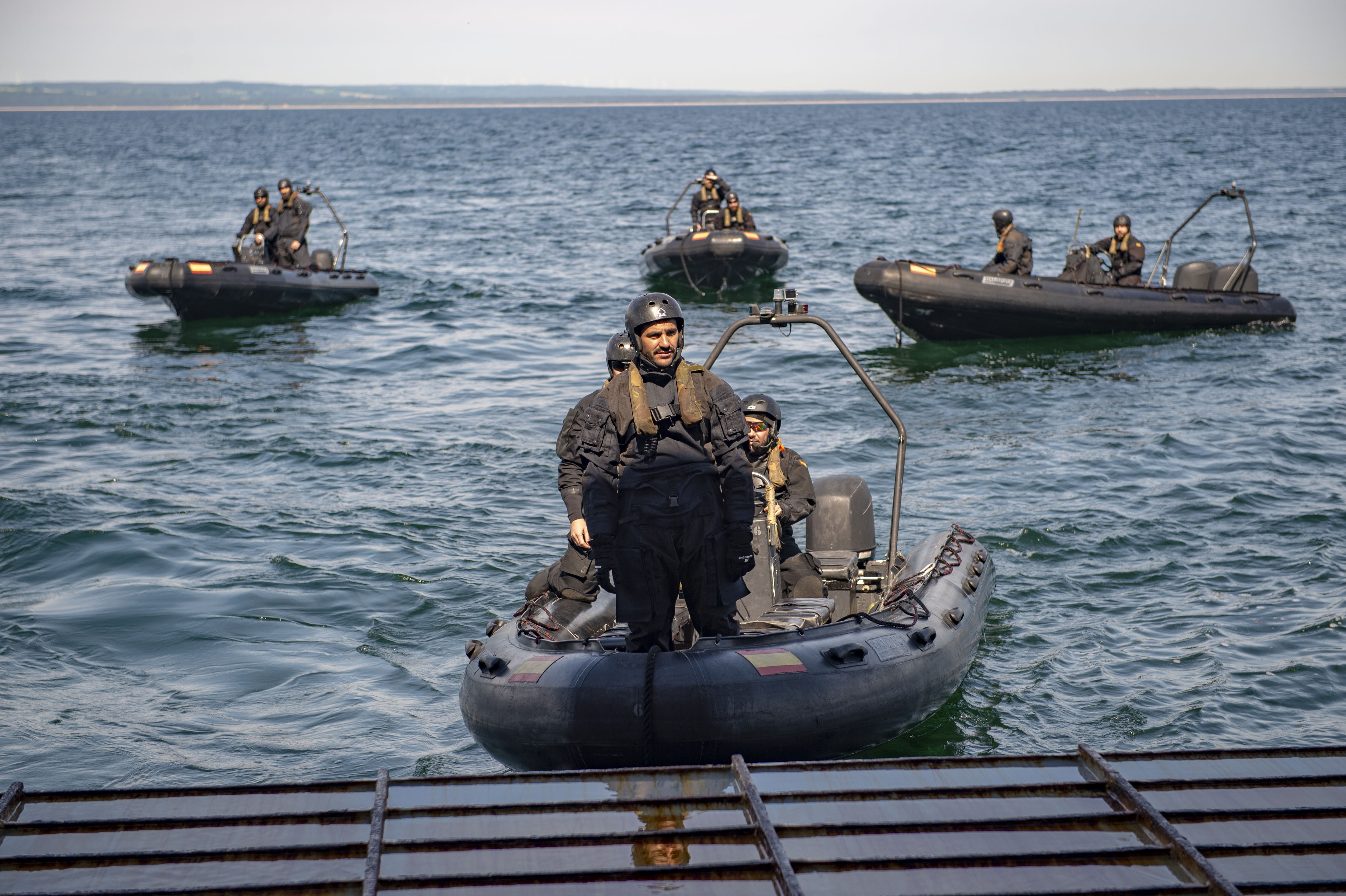 ABOARD USS MOUNT WHITNEY, IN THE BALTIC SEA – As this year’s BALTOPS exercise shaped up to be the largest in years, exercise planners also sought to make the annual event more focused on high-end warfighting than previous iterations, BALTOPS leadership told USNI News.

Vice Adm. Andrew Lewis, the commander of U.S. 2nd Fleet and commander of the 47th iteration of the annual exercise, told USNI News from his office aboard command ship USS Mount Whitney (LCC-20) that he didn’t want this year’s event to be an exercise for the sake of exercising; he wanted every detail focused on operationally relevant warfighting skills.

“47 years, started off being a live-fire (exercise), very much in the Cold War era with the Soviet Union,” he said of the exercise’s history.
“And then it went for a number of years where the Russians were invited, uninvited, invited again, and then disinvited indefinitely in 2014 post-Ukraine. And it’s been edging back toward, I wouldn’t call it toward a cold war reenactment, but edging back to a real operationalized exercise in which we’re trying to gain some operational capability and do some things differently, do some new things.”

To that end, he said, BALTOPS 2019 had some major contributions towards increasing the operational readiness of militaries in the region.

First, he said, the exercise is using new amphibious tactics that resulted from the NATO Amphibious Leaders Expeditionary Symposium series of meetings and wargames, which began in October 2016.

“The amphibious principles that we’re exercising, it’s never been done before in a NATO construct. We’ve done it on a small scale with the United States Navy and United States Marine Corps, but compared to this, not even close. Not with fully integrated forces. We’ve got Spanish Marines with U.S. Marines with British Marines. It is fully integrated. This is really really high-end tactical training,” he said.
“The command and control when you have transitions (from sea to land, for example) is an area we need to focus on from a safety standpoint, from an operational efficacy standpoint. To smooth the transition so as to bring the full capability of the force to the point of contact.” 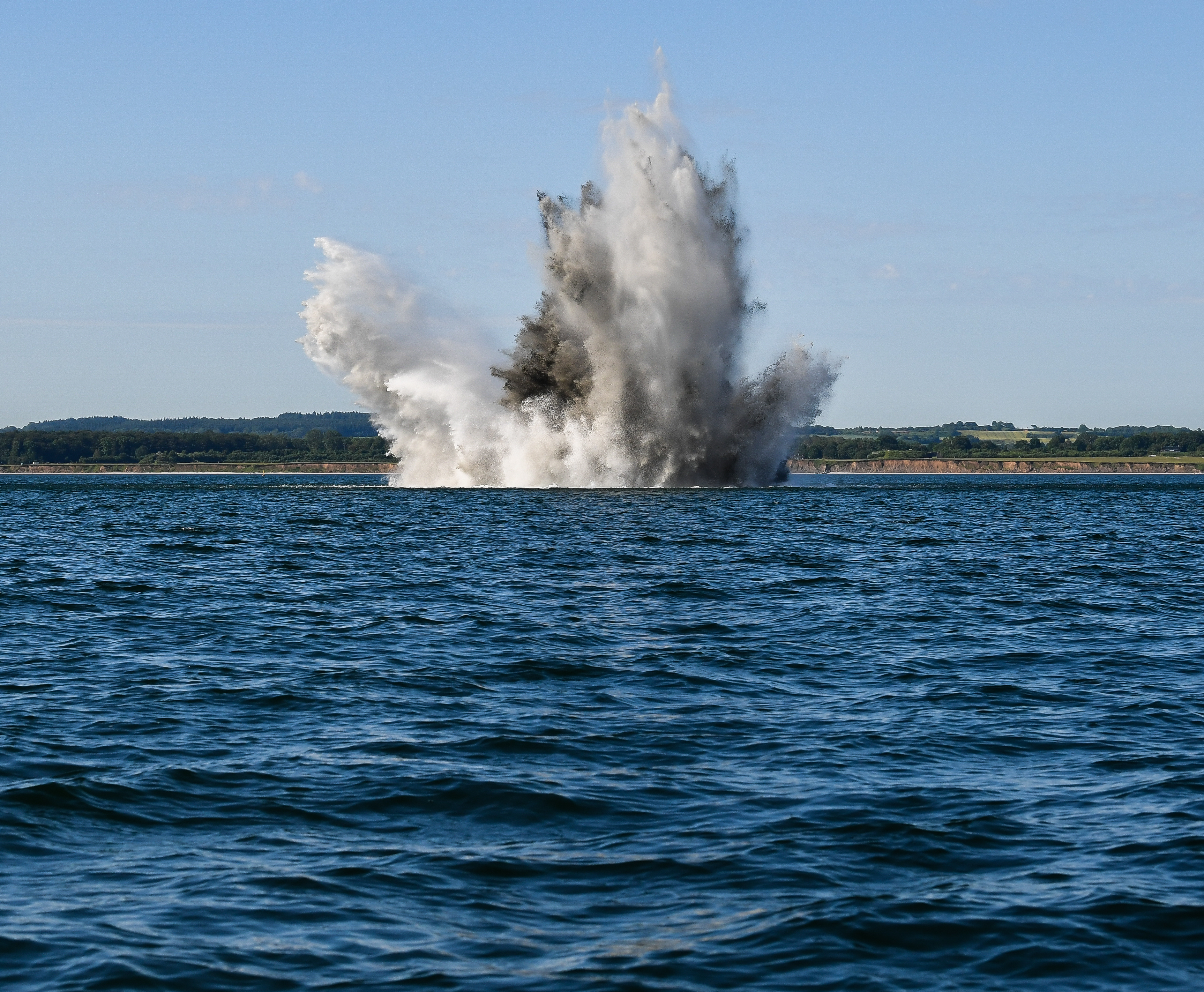 A roughly 1,000 pound, World War II-era air laid mine detonates in the Baltic Sea after being discovered by the BALTOPS 2019 Mine Warfare Task Group and being rigged for detonation by a team of Norwegian Explosive Ordancemen. US Navy photo.

Lewis also cited new situational awareness tools that he declined to talk about in more detail, as well as the presence of high-end Aegis Combat System-based air defense frigates and the first ship-based tactical aviation that BALTOPS has included in years – Spanish AV-8B Harriers off ESPS Juan Carlos I (L61) – as signs of a more high-end and operational event.

“No matter how you slice carrier aviation, that is always high end. And any time you have submarines involved, that constitutes high end,” Lewis said.

Royal Navy Rear Adm. Andrew Burns, commander of U.K. Maritime Forces and the deputy commander of BALTOPS 2019, said during the interview that “I would cite mine countermeasures and anti-submarine warfare as enablers for amphibious operations, and those are two highly technical and advanced forms of warfighting that have really embraced available technology and autonomy to achieve what they need to achieve.” 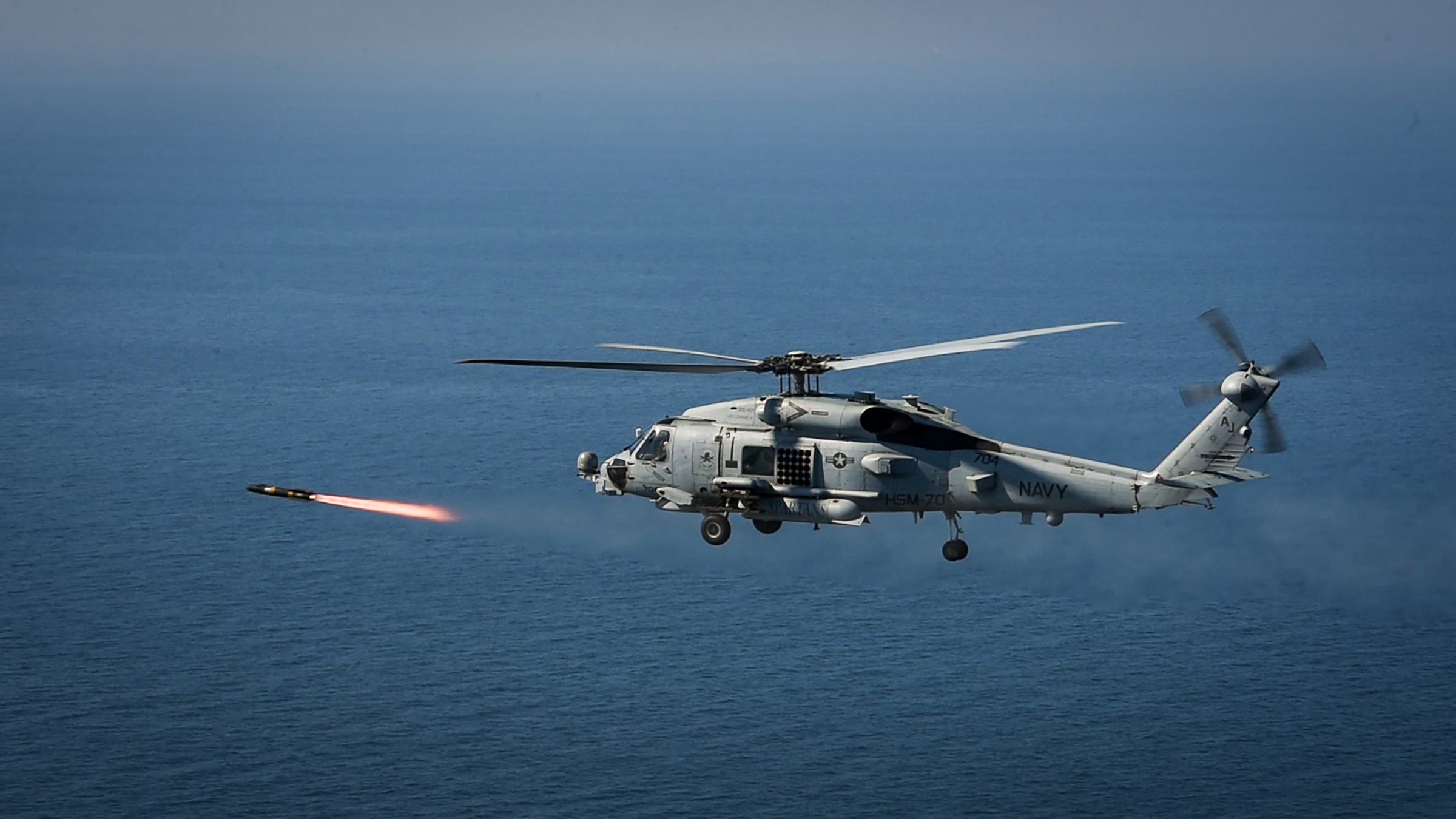 Burns also noted the importance of the exercise’s scale this year, which is so large that it includes not only NATO allies’ forces and standing NATO surface and mine countermeasures groups, but also brings in the new U.K.-led Joint Expeditionary Force (Maritime), which is using BALTOPS as one portion of its first-ever at-sea deployment.

“I think that combination of JEF (Maritime) and NATO is a very powerful statement of partnership, unity and cohesion in itself, but actually it’s bringing [JEF(M)] to a level where we can declare a genuine capability that we might have to deploy in anger on operations,” Burns said.

Noting the “great opportunity of the sheer scale of BALTOPS 19,” he said it was both a challenge and an opportunity to have so many pre-formed groups operating within the overall BALTOPS task force. Learning how to command and control these distinct groups – not only the JEF(M) but also Standing NATO Maritime Group 1, Standing NATO MCM Groups 1 and 2, and the Baltic Naval Squadron (BALTRON), among them – under a larger task force-level construct is “not straightforward, but of course it’s the reality of the scale of operations we might have to commit to in the future. So that for me is where the great opportunity lies, in command and control and how effective we are in coordinating the range of forces we have at our disposal over the next couple of weeks.”

Burns noted that this command and control of a task group included not just massive ships from non-Baltic states – the United States and Spain chief among them – but also highly specialized smaller ships and craft from the Baltic states themselves. Swedish corvettes that can get into shallow waters in the rocky archipelagoes of the Baltic Sea, as well as small landing craft that can maneuver easily and move ashore quickly, are all capabilities that the U.S. and larger NATO allies don’t have in their own fleets but that serve an important purpose in amphibious operations in this environment.

“The advantage of a coalition is that each individual country brings specific capabilities, and that’s why we’re much more effective with that full range of capabilities – and some of them are quite specialist, particularly those nations who operate in these waters more frequently than some of us,” Burns said.

Burns and Lewis noted the importance of integrating all these types of assets together in a forward environment that could be the location of potential NATO actions – making BALTOPS 2019 a much more relevant exercise than anything the U.S. could do on its own back at home. 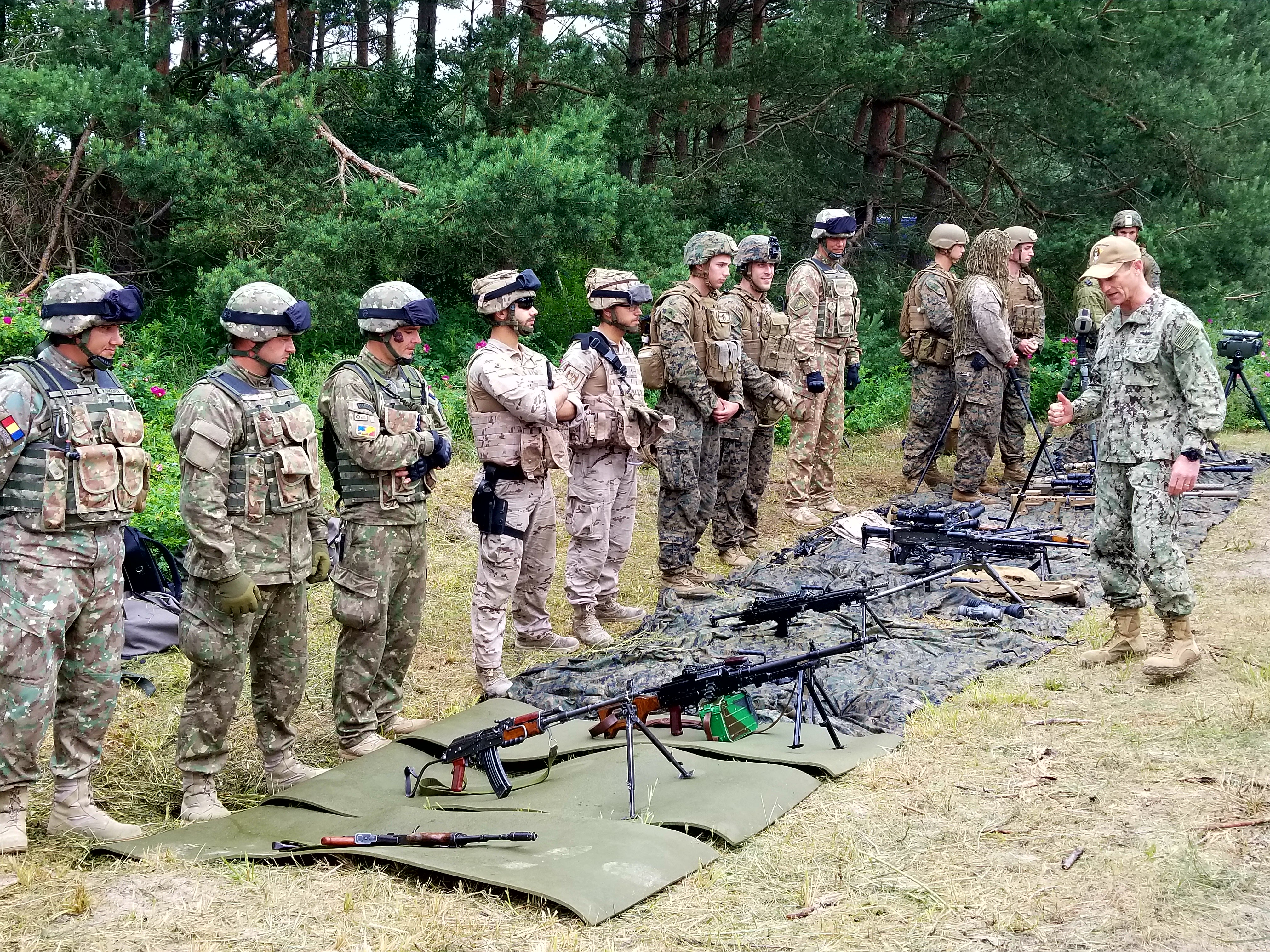 “What I think has been different in this year is the recognition by the regional partners and allies and the non-regional partners and allies of the change in the security environment and the recognition of that,” he said.
“There’s been a real emphasis on placing a lot of forces toward it in which we can do some things that have gone dormant in some regards over the last number of years.”

“Of course we live in an increasingly globalized and competitive world, and our economic prosperity depends on freedom of navigation and our ability to keep sea lanes of communication open. And so that’s why we have to be able to operate together in a professional capacity on the high seas to signal our support for a rules-based international system, because it’s that that our prosperity depends on. And that is very much the theme of the BALTOPS 19,” Burns said.
“We know that there are some adversaries who are what you might describe as resurgent, and that is focusing our minds on the capabilities we need to deal with that in order to preserve security on the high seas in our area of interest around the U.K. But of course that’s not unique to the U.K. There are interdependencies across the region which require us to work together to deal with those security challenges; they’re common to all of us. As a navy, we have to adapt to the security environment and the challenges we see emerging in the future.”