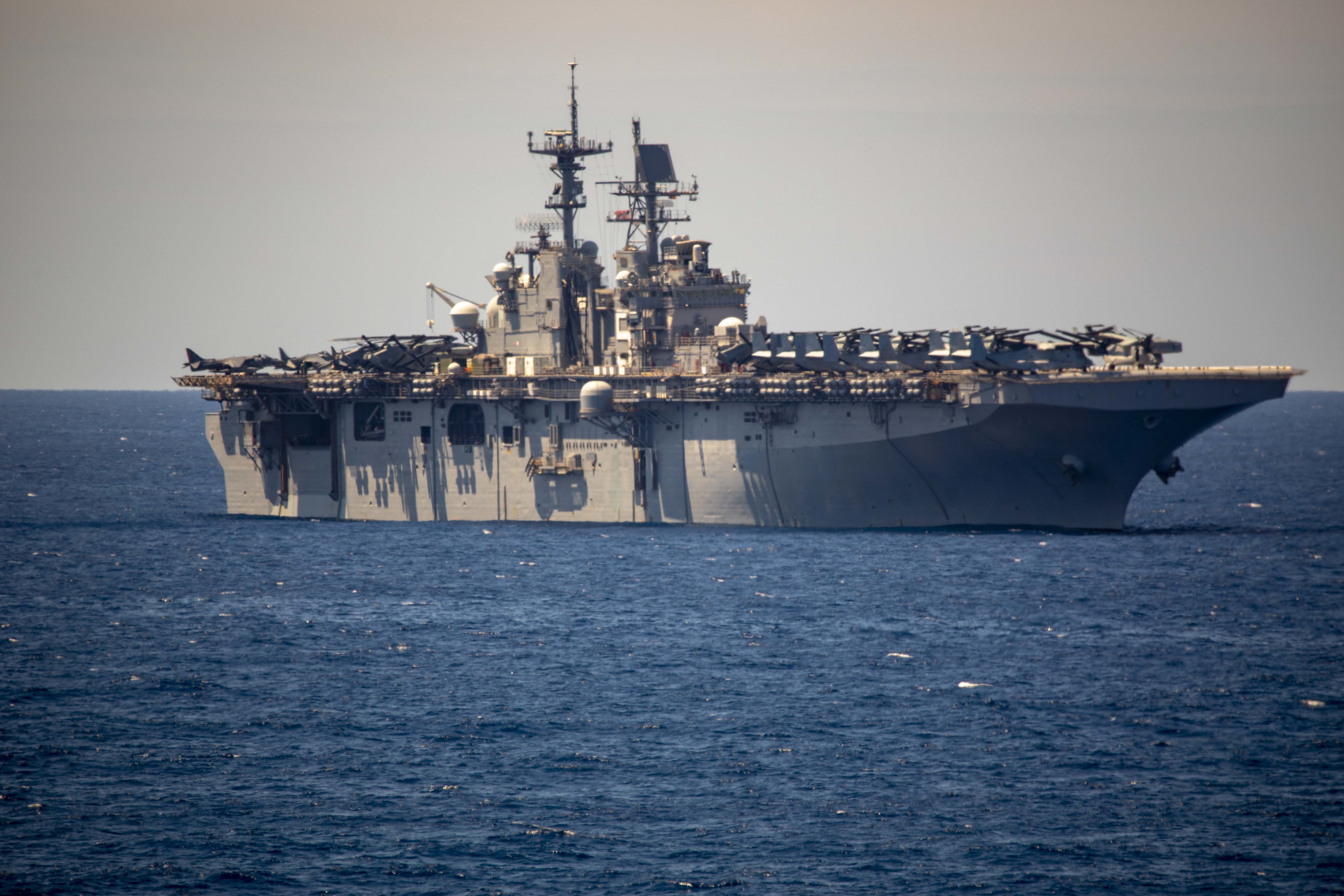 ANNAPOLIS, Md. – The U.S. Air Force, Coast Guard and even Customs and Border Patrol crews are in the Bahamas assisting with search and rescue efforts and damage surveys, while the U.S. Navy’s USS Bataan (LHD-5), with a fleet of ship-to-shore connectors and a 600-bed hospital, sits on the sidelines of the international aid effort.

U.S. Coast Guard and U.S. Customs and Border Patrol aircrews surveyed the damage and rescued injured Bahamian residents, according to statements from the two agencies that are part of the U.S. Department of Homeland Security.

The United Kingdom’s Ministry of Defence deployed its Bay-class Landing Ship Dock RFA Mounts Bay (L3008) to the Bahamas. Mounts Bay, a ship in the Royal Fleet Auxiliary that has been deployed to the Caribbean Sea and the Southeast Coast of the United States., is delivering emergency shelters, bottled water and food to the hard-hit Abaco Islands.

Receiving British support is not unusual for the Bahamas. The nation is independent but retains close ties with its former colonial power Great Britain as a member of the Commonwealth of Nations of former British colonies. The Bahamas recognize Queen Elizabeth II as the head of state.

However, the U.S. Navy has yet to be tasked with providing logistical support, delivering supplies or offering medical care, Navy officials told USNI News. As of Friday afternoon, Navy and NORTHCOM officials said there was no request for Navy assistance. Navy officials did not offer any reason why their capabilities are not being tapped.

Operating just offshore, Bataan is an amphibious assault ship with a fleet of helicopters, tilt-rotor aircraft and landing craft. The ship’s purpose is to deliver supplies and personnel to austere locations, especially regions with infrastructure damaged by either military actions or natural disasters such as hurricanes.

In the U.S., the Marine Corps evaluated the damage to facilities in the Carolinas, while the Coast Guard and Navy shuttered most of their Hampton Roads operations Friday.

The Navy sortied nearly two dozen ships to sea, while the Coast Guard relocated cutters out of the storm’s path, including sending Marine Protector-class cutters to ride out Hurricane Dorian at the U.S. Naval Academy.

“Our damage assessment teams are in the process of ensuring roads are clear and surveying any other potential hazards–with a particular emphasis on water damage to buildings that had tarps on them,” Maj. Gen. Julian Alford, commanding general of Marine Corps Base Camp Lejeune wrote on the base Facebook page. “Wherever possible, I need occupants to get into these buildings, inspect them, and start drying them out if necessary. Buildings left untouched that received water intrusion will quickly develop mold, so it’s critical that we all pitch in on this effort.”

Meanwhile, the crews of the Marine Protector-class cutters avoiding the storm in Annapolis used the time to train at the Naval Academy gym and display their cutters’ capabilities to the curious.

Marine Protector-class cutters deploy to do safety checks on recreational and commercial vessels, help search for overdue boats and missing swimmers and conduct marine fisheries enforcement. They can deploy for about four days before needing to return to shore to take on more fuel and water. The ships can only handle seas of about 12 to 14 feet without risking damage, so many of the cutters stationed in the Carolinas and Virginia headed north to avoid the hurricane winds and seas.

The crews expected to sail back home on Saturday, after the storm passed, where they could assist any search and rescue or other recovery efforts as needed.