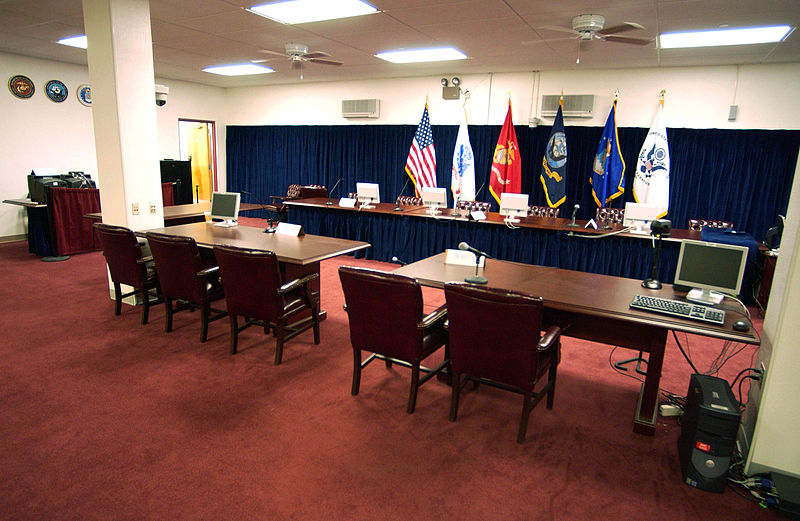 After months of high-profile legal gaffes, the head of the Navy has ordered what officials are calling an operational pause for the Navy’s legal community.

The largest and most comprehensive review of the Navy’s legal system kicked off the day after President Donald Trump publicly admonished the JAG community for awarding medals to the lawyers who were responsible for the failed prosecution of Special Warfare Operator Chief Edward Gallagher.

“Not only did they lose the case, they had difficulty with respect to information that may have been obtained from opposing lawyers and for giving immunity in a totally incompetent fashion,” Trump tweeted on July 31.
“I have directed the Secretary of the Navy Richard Spencer & Chief of Naval Operations John Richardson to immediately withdraw and rescind the awards.”

The next day Richardson directed vice chief Adm. Robert Burke to conduct the largest comprehensive review of the Navy’s legal services in its history, USNI News understands. Burke’s mandate from Richardson said, “recent events indicate a need to review the leadership and performance of the Judge Advocate General’s Corps.

The cases that prompted the look go beyond Gallagher’s murder trial and span the last four years.

The 60-day look will probe individual JAG training, unit-level training, organization of the JAG Corps, and the officers’ career paths.

It will also put a focus on legal advice lawyers give their commanders “with a particular focus on consistent delivery of the complete spectrum of legally available options with a risk-analyzed operationally informed legal assessment.”

In particular, officials singled out the unlawful command influence (UCI) from senior JAGs over the case of Senior Chief Special Warfare Operator Keith Barry. Barry was convicted of a rape charge in 2015, but the conviction was overturned by a military appellate court when it found that the Navy’s top lawyer, Vice Adm. James Crawford, had pressured officials on the outcome of the case.

Likewise, both Richardson and Adm. Frank Caldwell were found by military judges to run afoul UCI rules during the prosecution of former USS Fitzgerald (DDG-62) commanding officer Cmdr. Bryce Benson for his role in the 2017 collision that killed seven sailors.

“We’ve had more than one [case], more than two [cases] with incorrect legal advice being given, and we’re hitting the pause button to try and figure out the root of the problem,” a Navy official familiar with the effort told USNI News on Monday.

In particular, the high-profile prosecution of Gallagher for murder was fraught with problems. Those included, without knowledge of the military judge, prosecutors attempting to illegally monitor the defense team and journalists for leaks.

Ultimately, a jury found Gallagher guilty of posing with the dead body of an ISIS fighter but not of the fighter’s murder. The poor handling of the Gallagher case also prompted Richardson to remove the previous convening authority. Richardson will now oversee Gallagher’s sentencing and to also drop charges against Gallagher’s platoon leader, Lt. Jacob Portier, reported Navy Times on Saturday.

For military defense attorneys, the new look at the practices of the legal community of the feels like the operational pause after a warfare community suffers an accident.

The so-called comprehensive review uses similar language as when the Navy announced a deep dive into the Western Pacific surface collisions that killed 17 sailors in 2017.

“The last comprehensive review was of the surface community, and the culminating event was two ship collisions that killed 17 sailors,” Rob “Butch” Bracknell, a former Marine and military lawyer, told USNI News on Monday. “The fact that the JAG Corps has put itself in a position that the CNO believes a comprehensive review is necessary is unflattering. It more or less means, to me, the CNO perceives, in some measure, the JAG Corps has run its collective ship aground.”

Like the reviews into the collisions directed by Richardson and Secretary of the Navy Richard V. Spencer, Burke is encouraged to “seek input from other services, industry and highly qualified experts outside the services in order to ensure the widest possible perspective as we drive to the heart of the underlying issues and attack the root causes,” Richardson wrote in the Aug. 1 memo.

“Obviously, there were concerning aspects about the Gallagher case and other legal issues that the Navy has been confronting. So, I think this is a kind of proactive step that they had to take,” attorney Eugene Fidell told USNI News on Monday.
“I think this is a very positive development. It shows real leadership.”