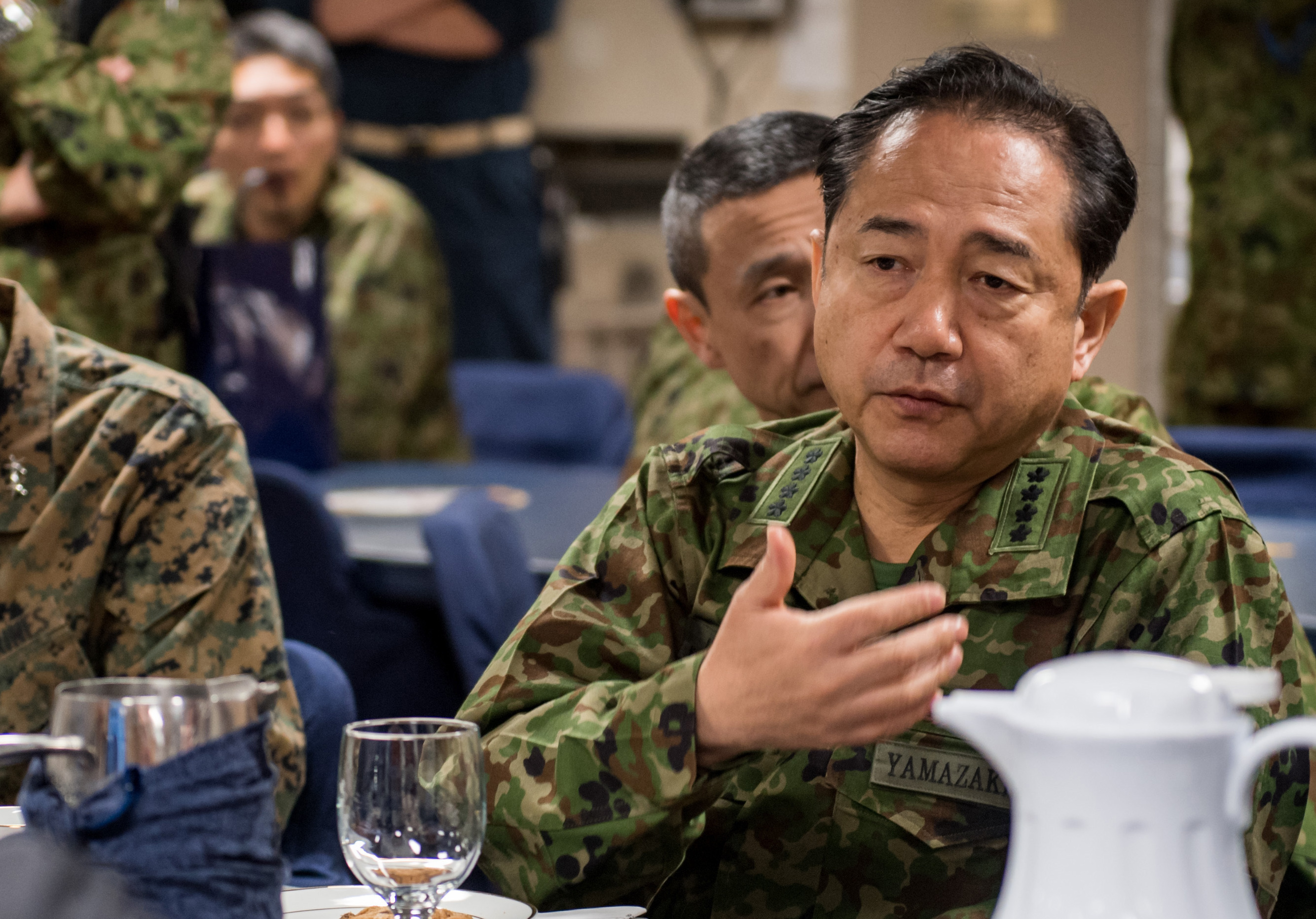 Speaking at the Center for Strategic and International Studies, Gen. Koji Yamazaki, who heads the Joint Staff of Japan’s Self-Defense Force, said so far this year Tokyo has responded to 20 intrusions, compared to 19 all of 2018.

The Chinese are employing gray zone tactics to expand their influence. That includes using social media to sway public opinion, economic pressure through proposing major infrastructure projects to other nations and applying political pressure through out the world to isolate Taiwan, he said during his presentation.

The 2005 graduate of the National War College in Washington spoke in English during his presentation but answered questions through a translator.

Yamazaki cited Beijing’s sending an aircraft carrier far from the mainland as just one example “of trying to change the status quo based on its claims.”

Japan, China and Taiwan all claim the Senkakus. Conflicting claims in the South China Sea involve a number of nations, but most often Vietnam, Malaysia and the Philippines.

“These attempts [to assert sovereignty through shows of force] will only escalate the situation” in the Senkakus and elsewhere, he said.

Moving the Chinese Coast Guard from civilian control to the nation’s military commission was particularly troubling, he said, signaling a hardening of Beijing’s position.

In response to the constant probing, Yamazaki said the Self-Defense Force, Japan’s Coast Guard and maritime police have not only faced a higher operating tempo to meet the challenges, but also have reassessed how they can better cooperate with each other and with allies in this changed security environment across all domains.

“We basically deal with contingencies bilaterally,” he said through an interpreter, though that strategy may have to change to deal with China.

Several times in his presentation and in answering questions, he emphasized the challenges of new technology – in space, in cyber and with electromagnetic weapons – compounding the threats Japan faces. While there is a mechanism in place with the United States to address these technological challenges, he called for more cooperation and sharing of intelligence, surveillance and reconnaissance (ISR) and data from space.

Yamazaki also pointed out the need for more cooperation in advanced military exercises like Pacific Vanguard, but also on the lower end of the range of military operations for the United States and Australia to work with Japan in building up the capability in smaller nations in the Pacific to protect their territory and police their waters.

When asked about a recent Chinese military white paper that raised questions about the future of self-governing Taiwan, he did not specifically respond to what Japan might do in the event of an armed attack on the island, but he did say it would have a direct impact on the security of Okinawa, a southern island in Japan near Taiwan that is home to a number of American-Japanese bases.

The white paper casts the United States as the destabilizing power in the Indo-Pacific by selling modern arms, including updated F-16 fighters, to Taiwan. It also cited American freedom of navigation and freedom of flight operations past and over militarized reefs in the South and East China Seas as adding to tensions.

“Japan is surrounded by expansionist adversaries,” Yamazaki said, adding Russia and North Korea to that list.

With the Washington-Tokyo alliance remaining strong, “Japan takes its role [as being] to actively block” these powers’ ambitions, Yamazaki said in answering a question. Japan and the United States “need to clarify how we are going to share this role” in maintaining peace and stability in the Indo-Pacific.

In regard to North Korea and cooperation with South Korea, Yamazaki said, “our common threat is North Korea’s missile and nuclear development.” He said Japan uses the two alliances – one between Seoul and Washington and the other between Tokyo and Washington – “to build peace and stability in the region.” Through the translator, he added that the three share information and cooperate in a number of areas despite the long-time chilly relations between Tokyo and Seoul.

He noted that Japan works with other allies, like Australia, in enforcing United Nation sanctions against North Korea in ship-to-ship transfers of coal, petroleum, manufactured goods and weapons.

Yamazaki said the Self-Defense Force is paying much closer attention now to Russia after it began expanding military activities and activities in its Far East, sometimes with China.