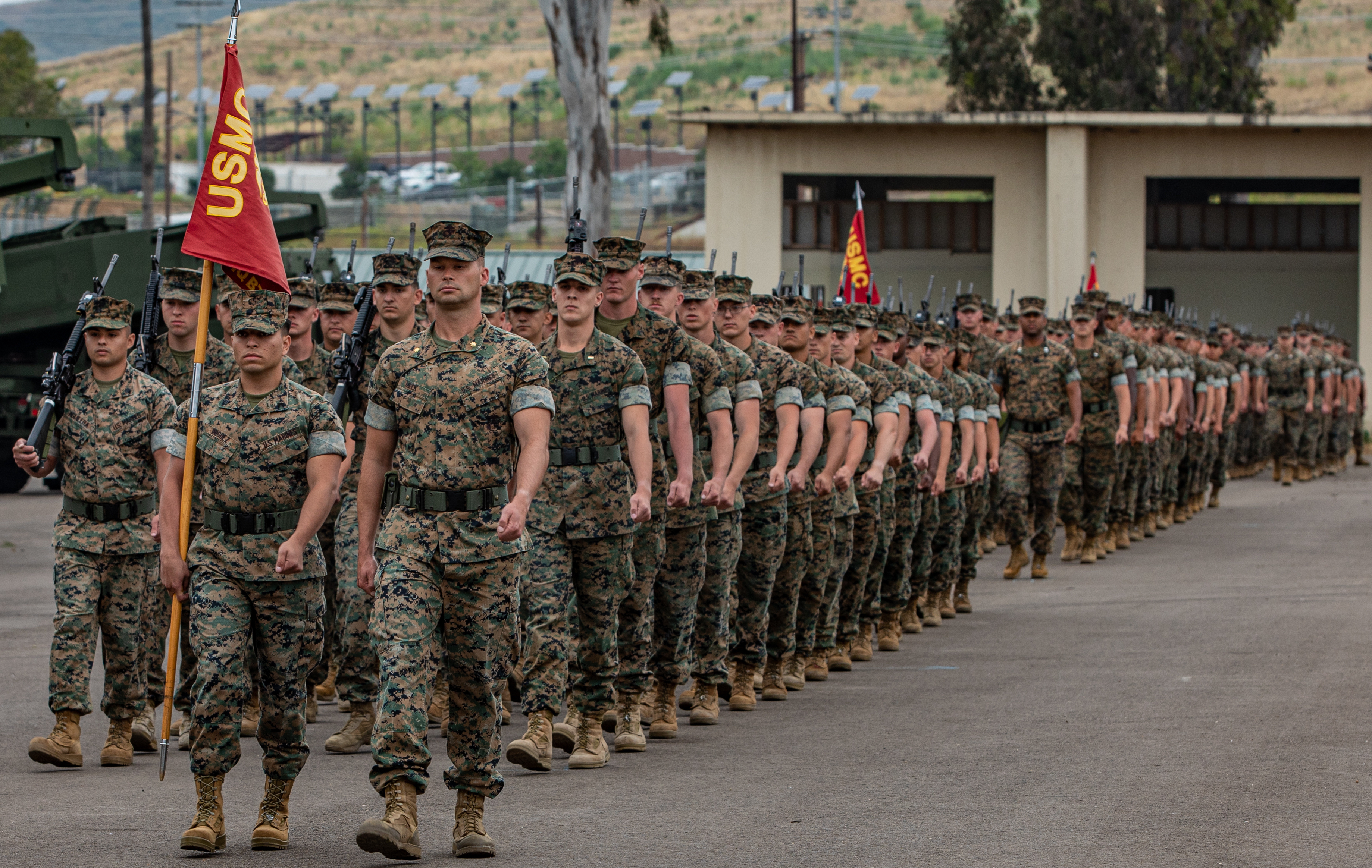 U.S. Marines with 1st Marine Division, participate in a change of command ceremony at Marine Corps Base Camp Pendleton, California on June 13, 2019. US Marine Corps Photo

Another eight Marines with the battalion “were taken aside to be questioned on their involvement in alleged drug offenses related to today’s arrests,” division officials said in a news release.

An official confirmed to USNI News the Marines arrested and questioned are all assigned to 1st Battalion, 5th Marines, an infantry battalion in Camp San Mateo at the Southern California base.

“The investigation is ongoing. They were taken into custody by NCIS personnel,” said a division spokesman, 1st Lt. Cameron Edinburgh. Charges against each of the Marines were pending and no information yet was available.

That case appears to be the July 3 arrests of two Marines – Lance Cpls. Byron Daniel Law II and David Javier Salazar-Quintero, assigned to 1st Battalion, 5th Marines. The Marines were stopped in the Boulevard/Jacumba area, east of San Diego, by border agents who had spotted a black car in an area known for smuggling and where agents saw fresh footprints, according to the federal complaint.

Another agent spotted the car and pulled the vehicle over. Law was driving and Salazar-Quintero was in the front passenger seat.

Three men in the back seat told agents “they are citizens of Mexico without any immigration documents that would allow them to enter or remain in the United States legally,” the complaint stated. All five men were arrested.

“Law claimed that (Salazar-Quintero) was the individual responsible for organizing the event” and solicited Law’s involvement, hours earlier, “picking up an illegal alien” in return for $1,000, the complaint stated. Law said the two Marines had picked up that individual in Law’s black BMW and dropped him off at a McDonald’s in Del Mar, a coastal city in northern San Diego, then returned to Camp Pendleton.

Both Marines returned to the border area the following morning after Salazar-Quintero called Law “for another job” and promised payment for both, the complaint states. They picked up the three men along Interstate 8 before agents pulled them over and arrested them. Two of the men told investigators “they were going to pay $8,000 USD to be smuggled into the United States,” destined for New Jersey and Los Angeles.

According to the complaint, Salazar-Quintero “admitted coming to Jacumba to pick up on four different occasions.

In the release, division officials said “1st Marine Division is committed to justice and the rule of law, and we will continue to fully cooperate with NCIS on this matter. Any Marines found to be in connection with these alleged activities will be questioned and handled accordingly with respect to due process.”

The following is the full statement from 1st Marine Divison.

Camp Pendleton, Calif. – On the morning of July 25, 2019, officials from 1st Marine Division worked alongside the Naval Criminal Investigative Service (NCIS) to carry out the arrest of 16 Marines during a Battalion formation at Camp Pendleton, California.
The 16 Marines were arrested for alleged involvement in various illegal activities ranging from human smuggling to drug-related offenses. Information gained from a previous human smuggling investigation precipitated the arrests.

An additional 8 Marines were taken aside to be questioned on their involvement in alleged drug offenses unrelated to today’s arrests.
None of the Marines arrested or detained for questioning served in support of the Southwest Border Support mission.

1st Marine Division is committed to justice and the rule of law, and we will continue to fully cooperate with NCIS on this matter. Any Marines found to be in connection with these alleged
activities will be questioned and handled accordingly with respect to due process.