Instead of a using an almost-million-dollar Navy missile, Marines splashed a hostile Iranian drone on Thursday for about the cost of a couple of gallons of gas.

During a transit through the Strait of Hormuz into the Persian Gulf on Thursday, Marines – operating a new electronic warfare system on the deck of USS Boxer (LHD-4) – downed a hostile unmanned aerial vehicle 1,000 yards from the amphibious warship.

The new Marine Air Defense Integrated System (MADIS) used is a combination of components that includes electronic jammers, radars and gun systems to take out UAVs. The version of the system aboard Boxer was mounted on an MRZR that was perched on the bow of the ship and was powered by a gasoline electrical generator, according to photos released from the service. The Marine Corps did not immediately respond to a request for additional information on the system.

The encounter is the first known kill by a new generation of electronic warfare and directed energy weapons the U.S. has developed over the last decade to handle the daunting problem of how to counter voluminous, low-end threats without resorting wasting high-dollar missiles, naval analyst and retired Navy officer Thomas Callender told USNI News on Friday.

In particular, both the Navy and Marines have been concerned about swarms of cheap but lethal unmanned vehicles that could overwhelm a ship or ground unit’s defenses.

It’s a tricky problem. Defenses on U.S. warships are optimized for the high-end threats, and firing expensive missiles to intercept a drone that’s a fraction of that cost puts Americans at a cost disadvantage.

For example, Boxer fields short-range RIM-7 Sea Sparrow missiles that cost about $170,000 each and the RIM-116 Rolling Airframe Missile that costs shy of a million dollars apiece. Either, or a combination of both, would have likely been used to down the Iranian drone on Thursday if the Marine’s MADIS wasn’t sitting on Boxer‘s deck, USNI News understands.

The Navy has tested less expensive options at sea to shoot down drones, trying its 5-inch deck guns as well as the Phalanx Close-in Weapons Systems with limited success.

“They found that the 5-inch gun took multiple shots to try and hit it because it’s not designed for something slow and small,” Callender said. “Even with the CIWS, it took a lot of shots to take that out.”

Those types engagement still costs thousands of dollars in rounds, on a ship at sea with a limited supply of ammunition. 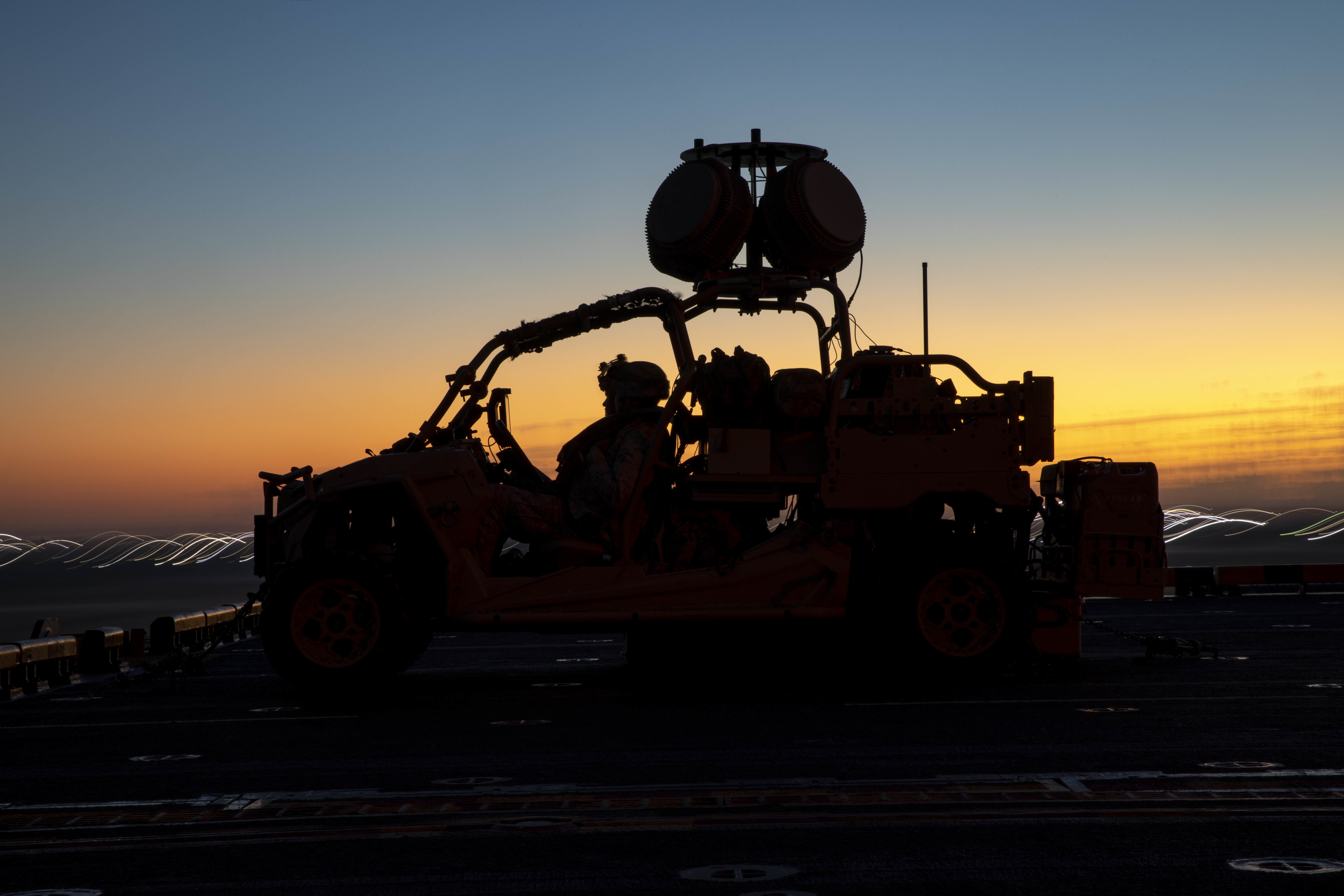 With systems like MADIS, “now you’re, back on the right side of that costs exchange ratio,” Callender said, “instead of spending hundreds of thousands or millions of dollars on a missile or a higher-end weapon against something that’s very low-end, low-cost.”

In 2014, the Navy deployed a 30-kilowatt laser aboard a ship in the Persian Gulf as an early test of a directed energy weapon at sea after it proved it could disable small boats and UAVs. Then-Office of Naval Research chief Rear Adm. Matthew Klunder highlighted the cost of firing the laser – about a dollar a shot.

The Navy is moving to install its first 60-kilowatt Lockheed Martin-built High Energy Laser and Integrated Optical-dazzler with Surveillance (HELIOS) directed energy weapon on a destroyer in 2021. The Navy is also working on additional electronic warfare capabilities on its surface ships that could find non-kinetic ways to disable enemy missiles and UAVs. In January, Northrop Grumman won a contract to develop the Surface Electronic Warfare Improvement Program (SEWIP) Block III electronic attack capability for U.S. warships.

In addition to the lower cost of operating the systems and an ammunition supply only limited by the energy a vehicle or ship can generate, Callender said there were other benefits to the new systems.

Using systems like MADIS is “less escalatory than if you shot a missile,” he said.
“And in some ways, depending on the scenario, you could have deniability. ‘Oh, it crashed. We don’t know why it crashed.’”