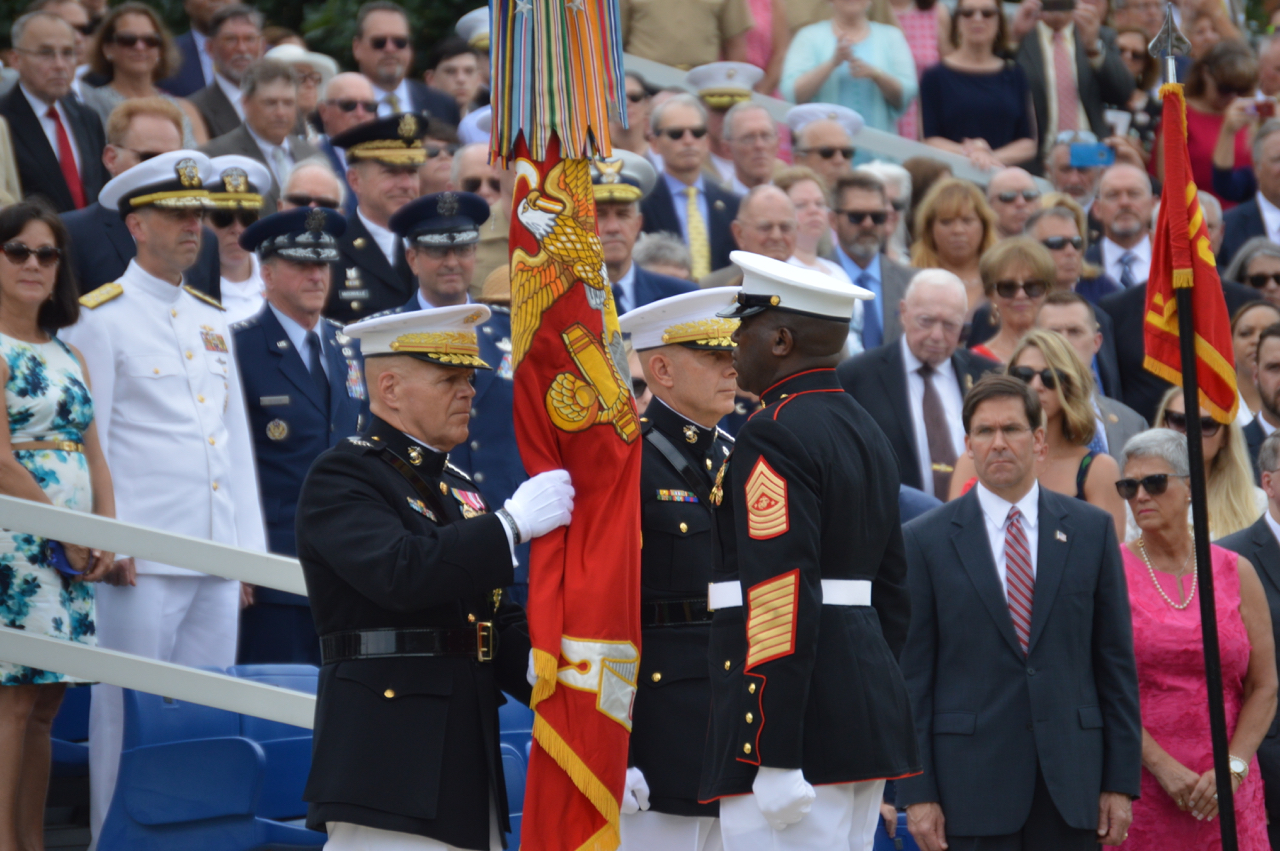 WASHINGTON, D.C. – Gen. David Berger today took command of a Marine Corps that has begun a transition to a fighting force preparing for high-end modern warfare. Outgoing Commandant Gen. Robert Neller reflected during the change of command ceremony that the service scarcely resembles what it was when he was commissioned in 1975 and in many ways looks different from the corps he took command of four years ago.

Berger relieved Neller in a Thursday morning ceremony at the Marine Barracks Washington parade field, with a slew of former commandants, current flag and general officers, lawmakers and other dignitaries in attendance.

In Neller’s four years leading the service, the Marine Corps has shifted its focus from ground wars in the Middle East to prepare for a high-end future fight – at or near the sea. The service has embraced information warfare, revamped its amphibious doctrine, incorporated unmanned systems and electronic warfare into the infantry all the way down to the squad level, and made other changes even ahead of the Pentagon’s drafting of the National Defense Strategy, which sought to move the Defense Department in a direction Neller’s Marine Corps was already moving.

The service has also operationalized the F-35B Joint Strike Fighter and developed and procured a new Amphibious Combat Vehicle to replace aging equipment, as well as launched programs like a Group 5 unmanned aerial system to move into the future of warfare – all while addressing readiness challenges created through years of high-tempo operations with not enough investment in maintenance and readiness. 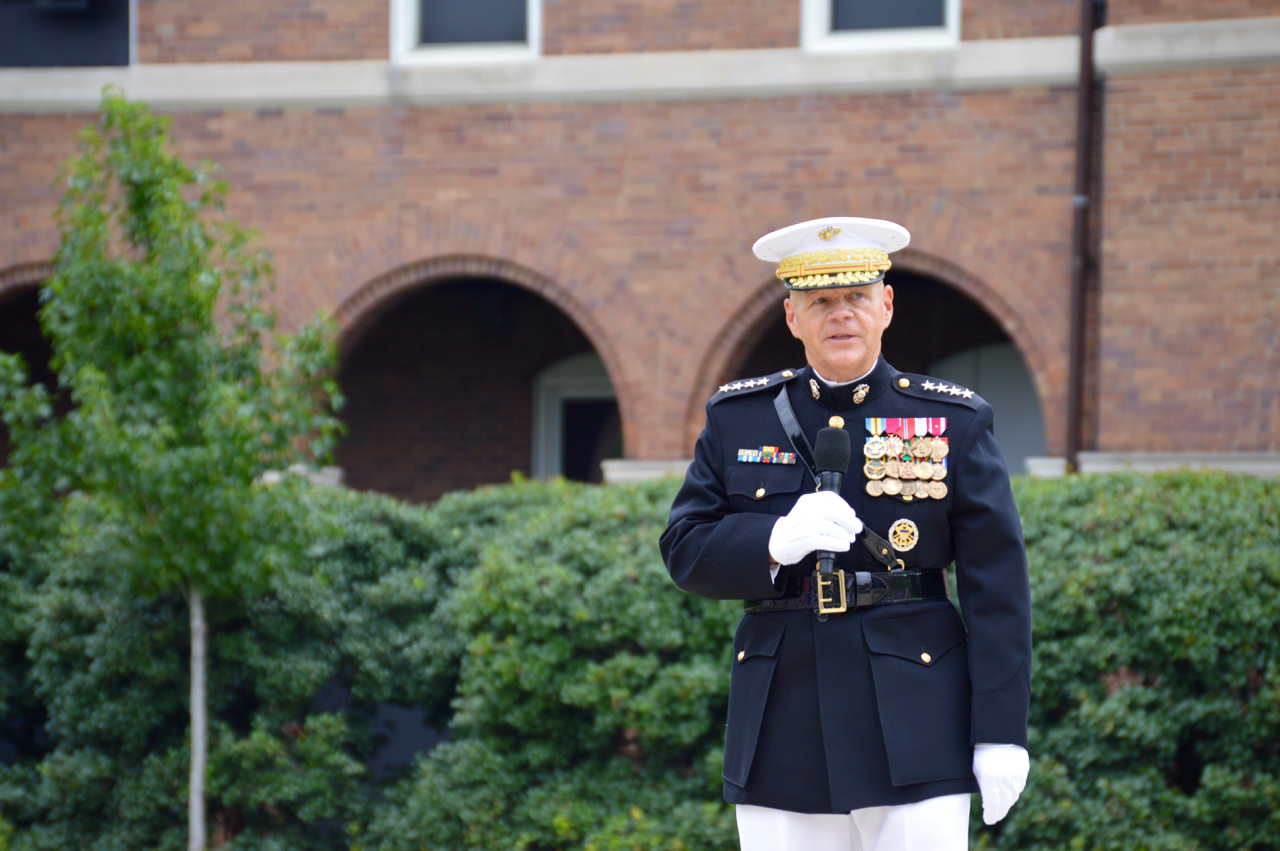 “If I want anybody to remember anything about the last four years, it’s that our Corps, we’re in a little bit better place. We’re a little more ready, we’re a little better trained, we got a little better equipment – but that’s come through a lot of hard work form the Marines that are here in the stands and the senior leaders and the staff NCOs that have gone out there and did the work to leave the range in a better place,” he said.

Acting Secretary of Defense Mark Esper noted the changes the Marines have seen under Neller’s command in his remarks.

“He spearheaded efforts to modernize how the Marine Corps organizes, trains and equips for future conflict, ensuring the men and women of the Corps are prepared to fight and succeed on the battlefield. In this, he continues the Marines’ tradition of constantly striving for self-improvement,” Esper said.

“As a trusted advisor on the Joint Chiefs of Staff, Gen. Neller is known for his passion for accomplishing the mission and his candor in providing military advice. Never one to shy away from the toughest issues, he could always be counted on to advocate for the men and women of the Corps and for the joint force,” the acting secretary continued.
“He is endeared as a Marines’ Marine, beloved by his subordinates who would proudly follow him into any battle. Gen. Neller, we owe you a tremendous, tremendous debt of gratitude for your leadership, which will resonate in the Corps long after you depart. Throughout your storied career, you have shaped generations of Marines who will benefit from your service for many years to come.” 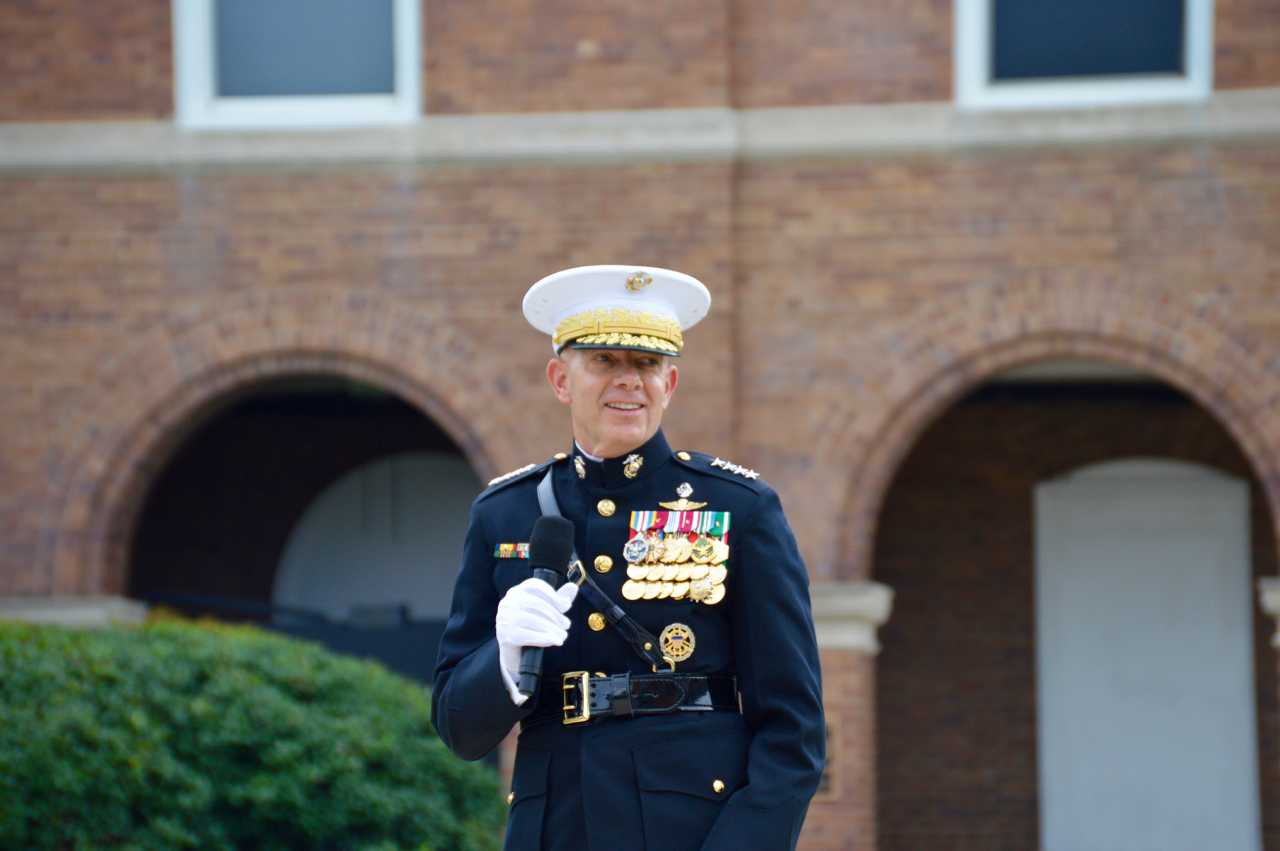 Berger, in his remarks at the end of the ceremony, noted the ongoing need to improve and prepare for whatever fight lies ahead.

Esper expressed great confidence in Berger’s ability to do just that.

“Gen. Berger understands well the challenges we face in today’s complex strategic environment,” Esper said.
“He possesses the intellect, the stamina and the courage to lead and to succeed in this demanding position. Dave, as you take the reigns, know that we have the utmost confidence in your abilities.” 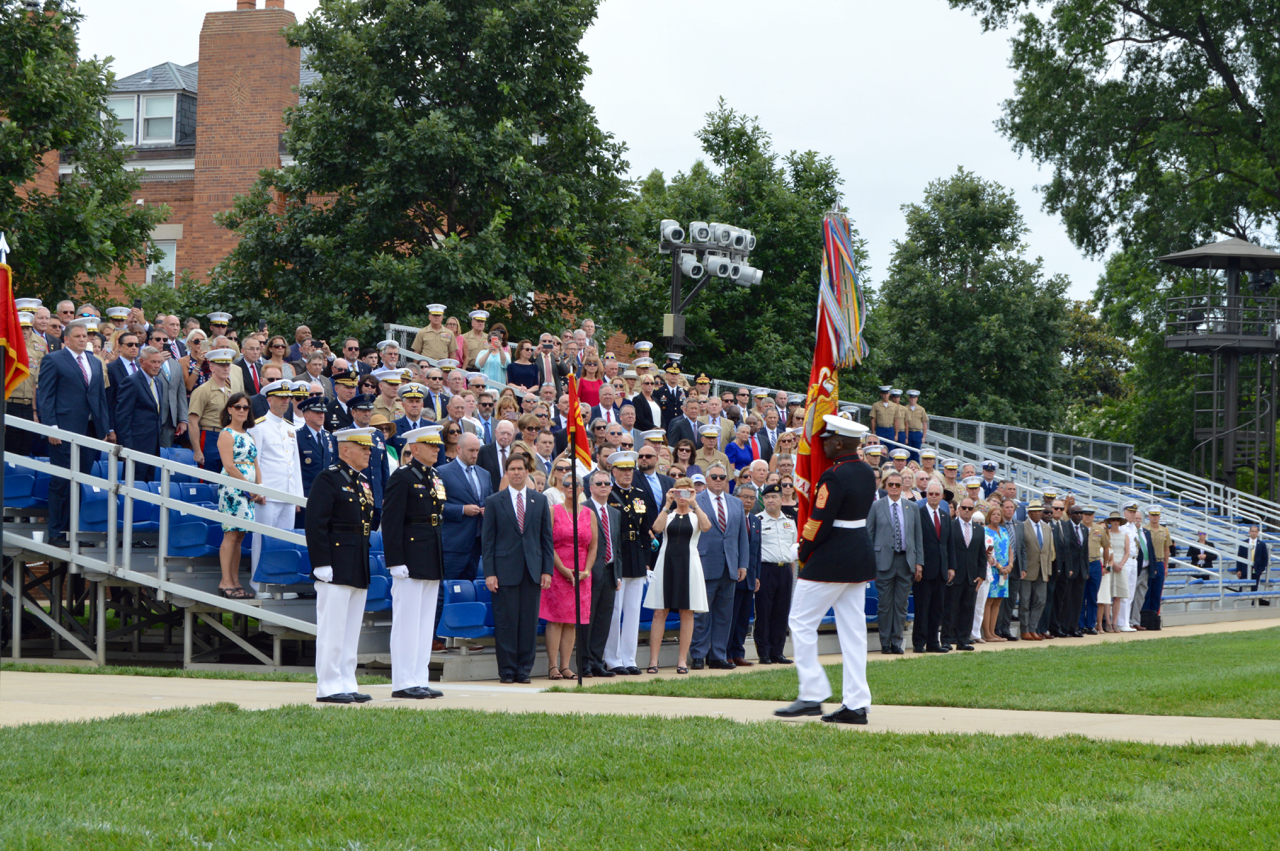 Neller reflected on his 45-year career in his remarks, recalling that the Marine Corps hasn’t been perfect at all times and that he himself has not been perfect either.

“In April of 1977, I really regret burning down Range 2 at Camp Hansen. I didn’t really mean to do that,” he outgoing commandant said, chuckling.
“We had a big pile or mortar increments and we were going to torch them off, and I made the long-chain, being a smart second lieutenant. It was a little windy, and the increment went in the air, and the grass was dry, and we burned down the whole range. And I thought I was watching something else burn as the flames worked their way all the way to the top of the ridge.”

After being sent up the chain to the office of the battalion commander, Neller recalled the conversation he thought might end his career: “’Did you burn down that range?’ ‘Sir, I did.’ ‘Don’t do that again.’ ‘That’s it?’ ‘Get out.’ And I left, and I was so happy. And I’ve had a couple of those, where for whatever reason – divine intervention, or pity, or just general disdain for my ability – I got to walk away and continue to serve and lead Marines.” 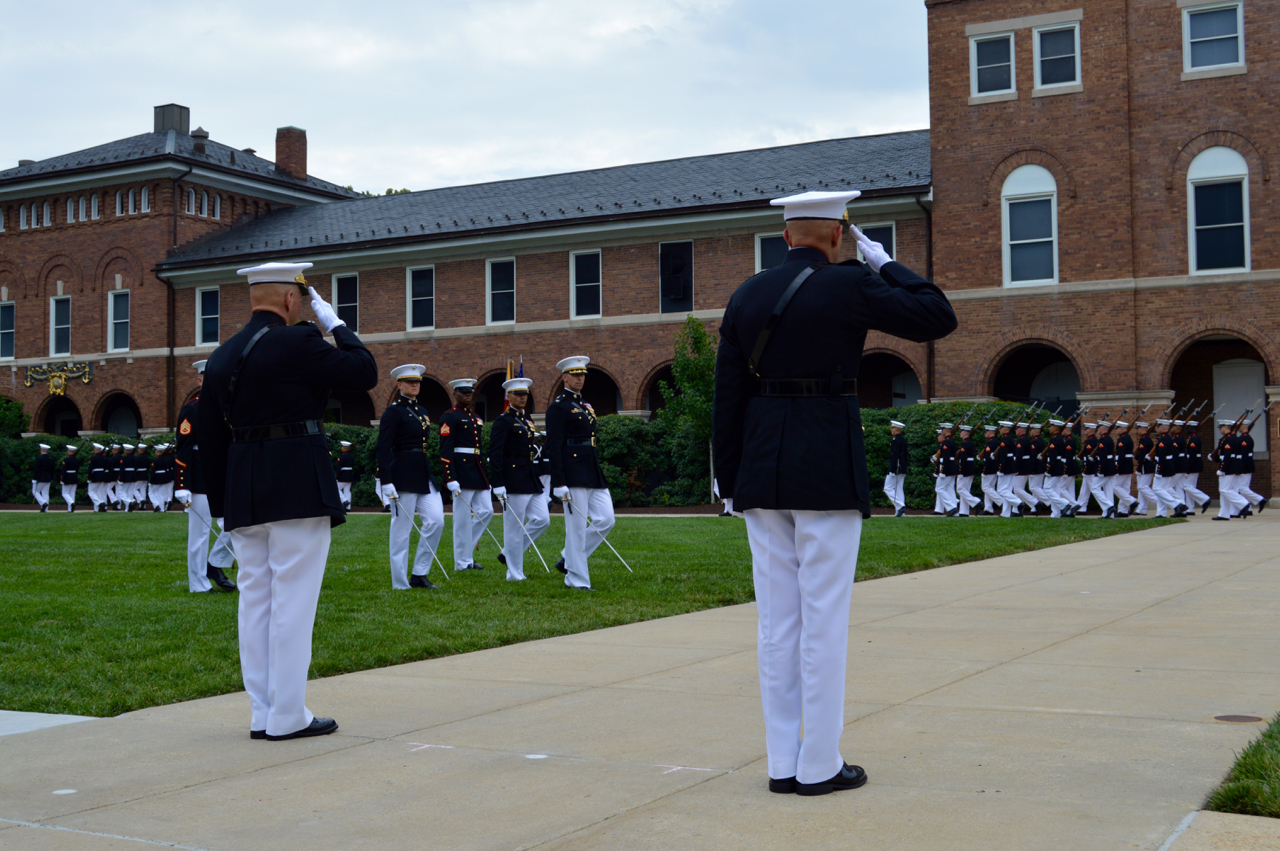 Noting that the service may not always be perfect but always strives to grow better, Neller said he’s extremely proud to have served alongside the other Marines in the corps.

“I know what the Marine Corps looked like when I came in and got to Okinawa in 3rd Battalion 4th Marines in June of 1976, and to be frank – and many of you, the senior Marines, you remember – we weren’t very good. We had good Marines, but as a group, our gear was old, we were at the beginning of the all-volunteer force, we had Marines in our ranks that today, they’d never make it in the Marine recruiter’s front hatch. But they were still Marines, and we trained them and we did the best we could with the money we had and the gear,” he said.

“But over time, through the efforts of great commandants like Gen. [Louis] Wilson and Gen. [Robert] Barrow, we raised our standards, we improved our recruiting, we improved our training. Gen. [Alfred] Gray made us think about warfighting, maneuver warfare. We innovated with the Harrier and the Osprey, and then we went to war for the last 18 years,” he continued.
“And as much as we would like to stay in the world of counter-insurgency and stability ops, which is not going to go away, we’ve got to get ready for that next fight, which is going to be very different. It’s going to be very different against somebody who’s certainly in many ways as capable, if not more capable, than us, if it comes to that. Hopefully it won’t, but we can’t count on that. Our course of action isn’t hope, it’s be prepared.” 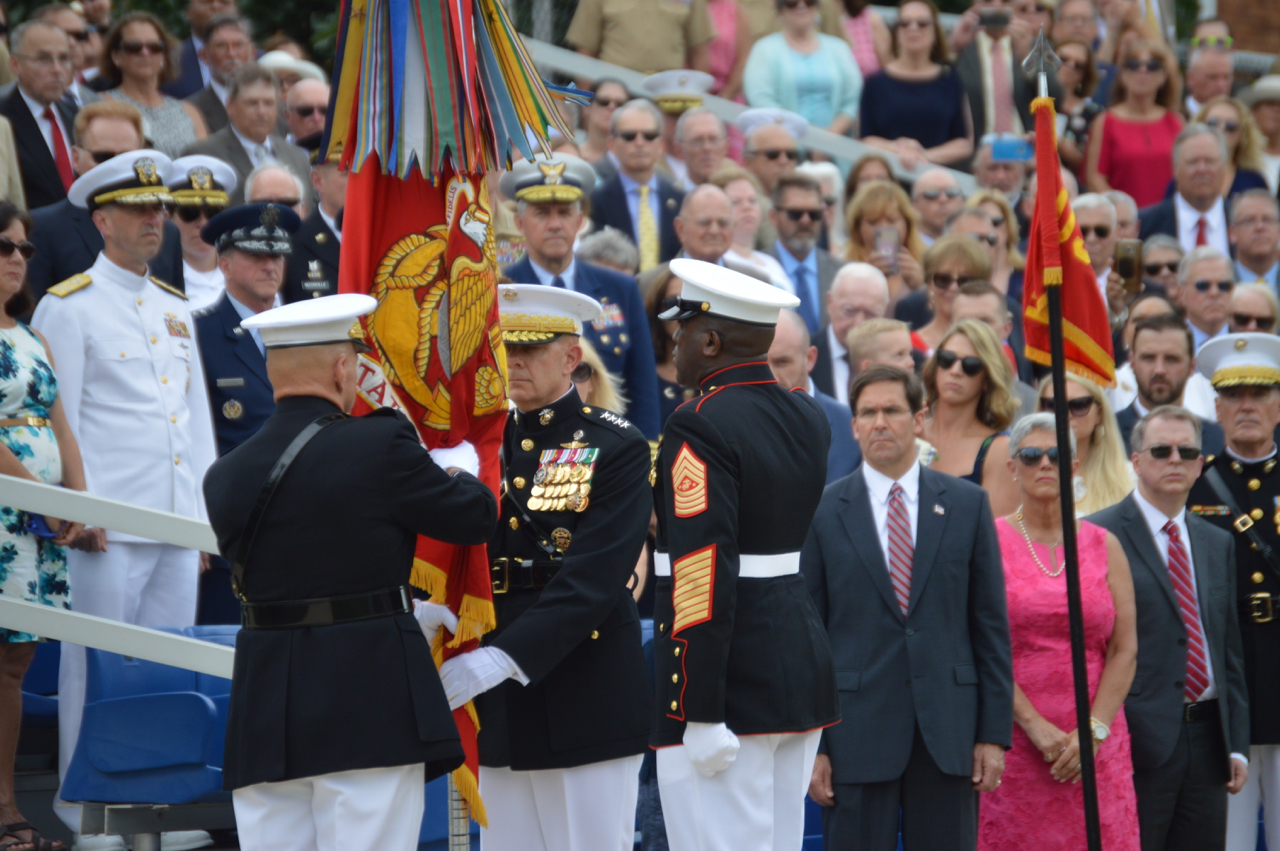 Berger too expressed his confidence in his fellow Marines to get the job done, whatever may be asked of them in the coming years.

“I believe in my soul Marines are different. We are not like everybody else. And the Marine Corps is not like every other organization. I think we are not defined by our equipment or our vehicles or our planes or anything else. I think our identity, in our soul, our identity is firmly rooted in our warrior ethos,” he said.
“This is the force that will always adapt and overcome, no matter what the circumstances are. We fight and win in any clime and place. That’s what we do, and that’s who we are. Semper Fidelis.”