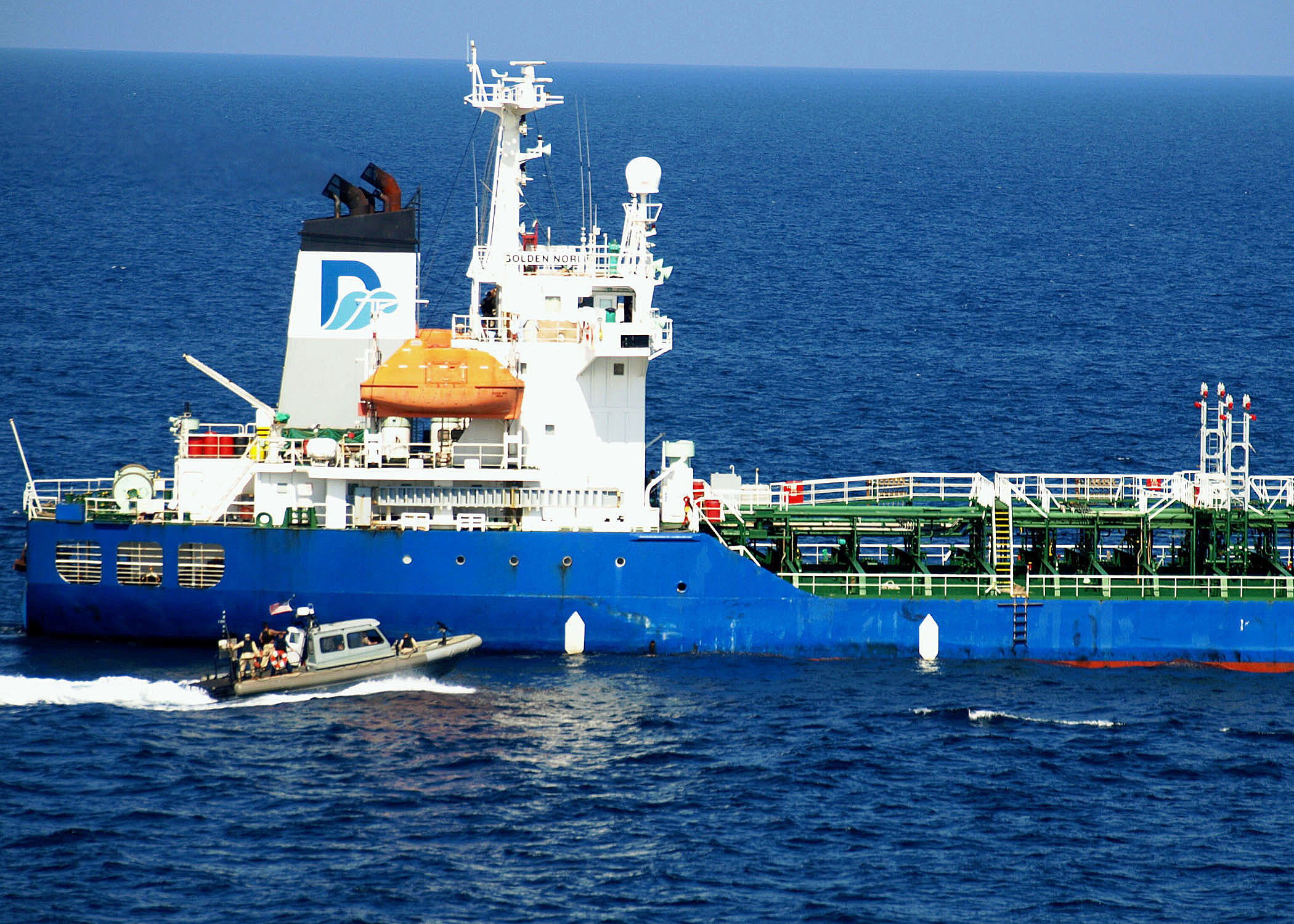 A boarding team from dock landing ship USS Whidbey Island (LSD 41) approaches merchant vessel Golden Nori after pirates released the Japanese chemical tanker Dec. 12, 2007. The pirates seized the ship off the coast of Somalia in late October. The release of Golden Nori marked the first time in more than a year that no ships were held by Somali pirates. Navy Photo

Great power competition dramatically expands the challenges of confronting irregular naval warfare such as defending against maritime pirates or preserving the security of data sent through undersea cables, a panel of experts said at the Hudson Institute last week.

Concentrating on the “new favorite buzzword, ‘lethality,'” masks the fact this kind of warfare “has always been a part” of the United States Navy’s experience, said Cmdr. Benjamin Armstrong, a professor at the Naval Academy and author of a recent book on early American naval history, at the Hudson Institute panel.

Great power competition and irregular warfare, “in history, they are explicitly mixed,” as they are now, although circumstances have changed with the eras, Armstrong said.

The difference today, Armstrong said, is how the Navy responds. During the era of John Paul Jones raiding Whitehaven or the Navy and Marine Corps battle against the pirates of Tripoli, the Navy had “general purpose” forces — sailors, soldiers, Marines — with enough training and the right gear able to do the job. Today, the nation increasingly relies on using U.S. Special Forces such as the Navy’s SEALs and Army’s Green Berets. These units are frequently tasked with carrying out some of these missions — especially using force.

“There’s never been enough” Special Forces to meet across-the-board China is posing, Russia and Iran are pursuing, and non-state actors are capable of employing, he said.

When thinking about irregular warfare, America focus had been on counterinsurgency operations and counter-terrorism said retired Navy Capt. Peter Haynes, former deputy director of strategy, plans and policy at U.S. Special Operations Command, and now with the Center for Strategic and Budgetary Assessments. “We’re now beginning to think about great power competition” in terms other than using force in these situations or believing in the Navy that fleet-on-fleet engagement is its only mission.

Cyberwarfare, fishing rights and illegal catches, reclaiming reefs and turning them into military islands in disputed waters, and piracy and illicit trafficking of weapons, people and narcotics were cited by the panelists as examples of this kind of irregular warfare being waged by states and non-state actors.

The “Marine Corps is (at) the leading edge of conceptualization” of the implications of this kind of competition and what needs to be done to gain the edge, Haynes added.

But since the creation of the Special Operations Command, with its own budget spending line, the services have drawn back from making these missions a priority when acquiring equipment, developing plans and policies, tactics, techniques and procedures.

“When we see the Navy buying small ships, we’ll see the Navy’s got it” in re-looking these kinds of operations in important littorals like the South China Sea and working with navies and coast guards in the Indo-Pacific, said Martin Murphy, a visiting fellow at the King’s College’s Corbett Centre for Maritime Policy and author of a recent work on piracy and weak states.

These nations are not aiming to build blue-water navies; they are seeking to improve the capacity of their coast guards and navies to secure their maritime borders, the panelists said.

“We’re going to need a lot more smaller ships,” which are not only capable of those operations but provide a targeting problem for adversaries like China if it came to a showdown, Murphy said.

“Our system is geared to a mental model of World War II” when it comes to thinking about warfare and competition among great powers, said Linda Robinson from RAND. “That’s not where the fight is happening now” and is not the same maritime challenge that Japan posed in the late 1930s. China’s problem is far more significant because of its global economic reach in trade and development, expanding military power far from the mainland and diplomatic presence in major conferences such as those on Iran’s nuclear weapons program and denuclearizing the Korean Peninsula.

A wise course for the U.S. to remember is “it might be more important to follow local leads” in what those nations want to actually achieve when considering longer-range American goals such as countering the growth of Chinese influence in the Indo-Pacific, said Joshua Tallis, author of The War for Muddy Waters: Pirates, Terrorists, Traffickers and Maritime Insecurity.