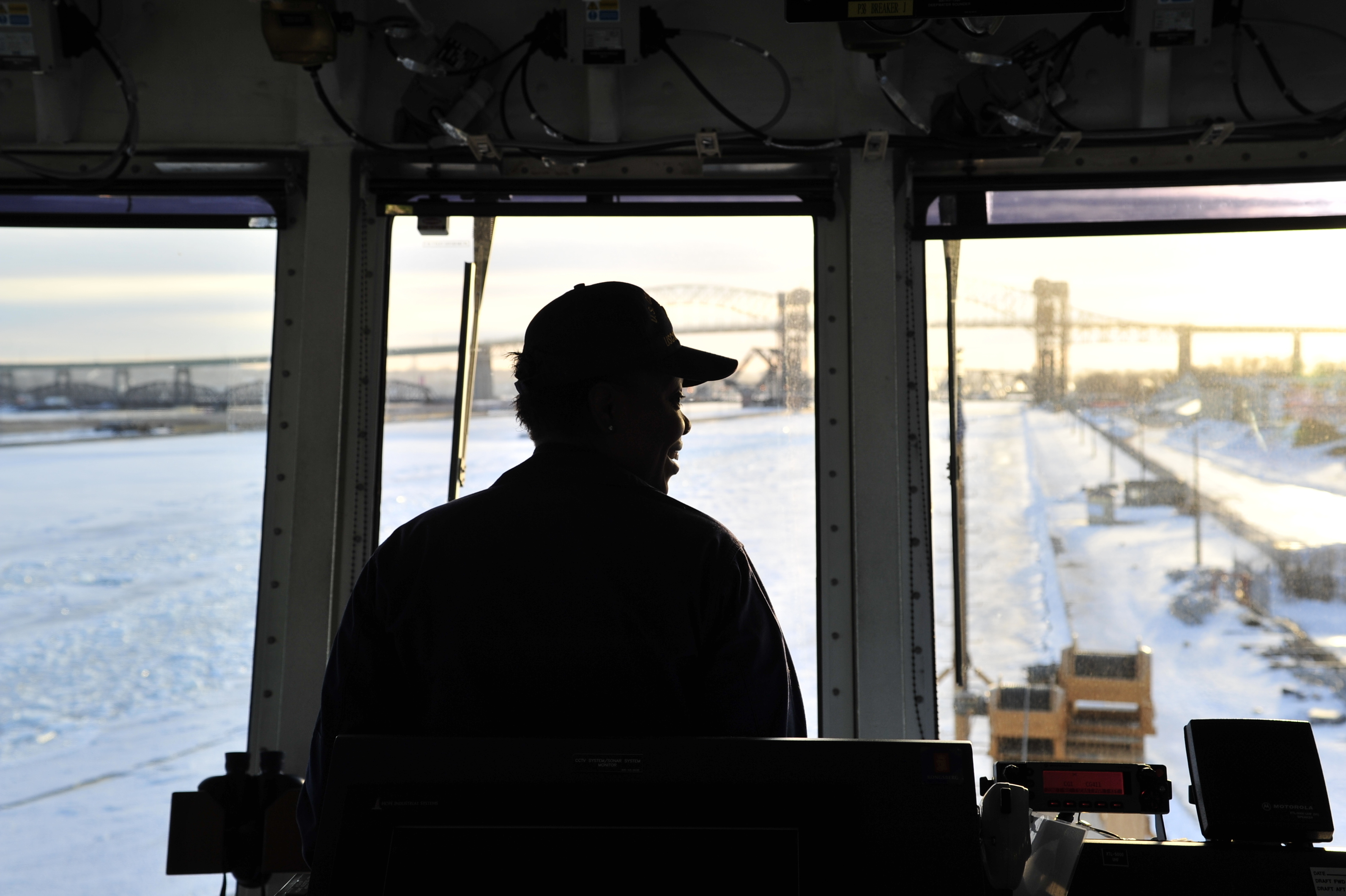 A crew member of the Coast Guard Cutter Mackinaw keeps a lookout before the ship’s departure for icebreaking operations on Whitefish Bay and Lake Superior ahead of the opening of the Sault Ste. Marie Locks March 25th, the start of this year’s shipping season. U.S. Coast Guard photo.

The Maritime Administration’s top official challenged critics of the Jones Act to prove the law’s requirement for having American-made ships with American crews is the “source of all evil” causing prices to increase for goods, minerals and food shipped by sea or inland waterways.

Testifying last week before the House Transportation subcommittee on the Coast Guard and maritime transportation, retired Rear Adm. Mark Buzby said the criticism “is just not borne out by the facts.” He and other witnesses said using trucks and rail to move cargo is more expensive and less efficient than using coastal trade and on inland waterways

More concerning, Buzby said, is opening this traffic to foreign shippers raises national security concerns about the inland waterways, including the Great Lakes. The act adds another “de facto layer of security” that these vessels and crews also can be called into government service in a time of international crisis.

“Why would we turn this over to a foreigner? It blows my mind,” Buzby said.

James Weakley, president of the Lake Carriers Association, said the Jones Act “is the bedrock of American policy” for mariners, vessels, shipyards and their builders to maintain a national presence in and domestic and international trade. The act allows shipbuilders and shippers to plan long-term in moving freight and investing in infrastructure, he added.

But the drive to open up American coastal trade and navigable waterway traffic to foreign vessels and crew and has gained new intensity in the past two years and has shown no signs of slowing down, despite hearings like Wednesday’s and presentations in seafaring forums.

To Buzby and the other witnesses, such a change would be disastrous for the American maritime industry.

“Today’s pool of mariners is insufficient to meet DoD’s needs” in an emergency, Buzby said.

On the plus side, Willis and Buzby said jobs in the maritime industry are good-paying, enough to support a family and have a future if the act is preserved and shippers are enticed to taking cargo to the waterways. The Jones Act, which was has been on the books since 1920, was passed after the U.S. experience during WWI exposed a strategic weakness in the ability to ship equipment and personnel to Europe.

However, in recent years, there has been little growth in this business. The witnesses agreed domestic shippers still tend to think highway or rail first and too many don’t consider using water routes.

The most significant barrier is “awareness” that “there are alternative means to move things other than throwing them on the back of a truck,” Buzby said. Short sea shipping, hauling cargo from Maine to the Chesapeake Bay, is “just not well known by many shippers.”

Thinking that waterways can be cheaper for shippers “needs to be intuitive,” said Jonathan Nass, the chief executive officer of the five-year-old Maine Port Authority. The benefits to the public and shippers include reducing pollution and congestion on already crowded interstate highways.

The harbor maintenance trust fund fee American shippers must pay when using two domestic ports amounts to “double taxation,” he said. Foreign competitors pay only once, putting U.S.-bases shippers at a disadvantage in an industry “where margins are razor thin. You have to be competitive.”

The reality of how that fee affects maritime traffic on the Great Lakes can be starkly evident, Weakley said. It’s common for cargoes to be unloaded in Montreal and then shipped by rail or highways back into the United States to avoid paying the tax a second time.

“It’s a disincentive to bring container ships into the Lakes” even from American ports, Weakley said.

Buzby added, “at the end of the day, it comes down to the business case” to change what has become ingrained thinking among shipping companies 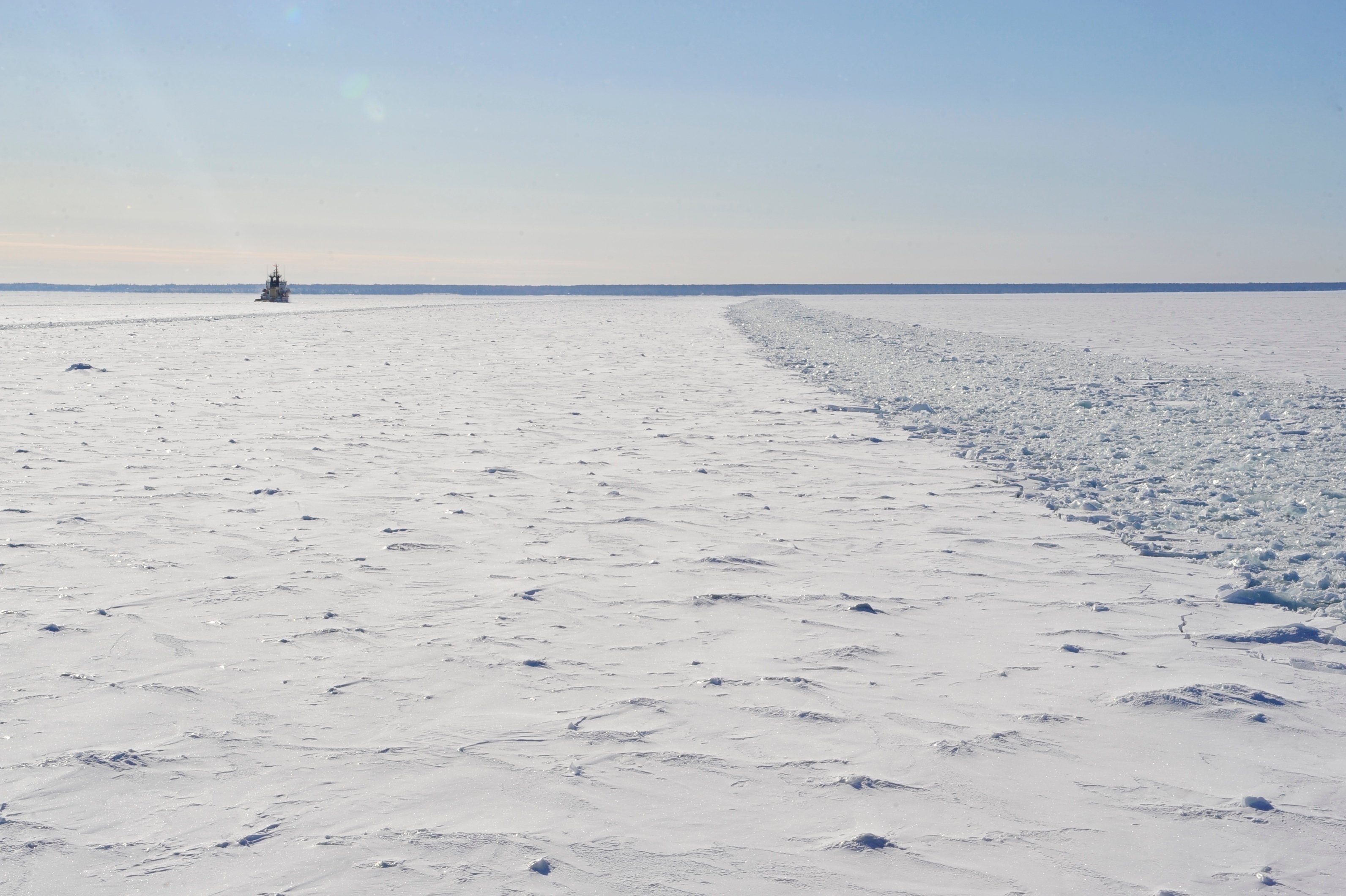 Panel members said a grant program the U.S. Maritime Administration started to improve infrastructure in and around ports on inland waterways is a step forward, but improving icebreaking on the Great Lakes also needs to be done immediately.

“The reliability [of Coast Guard icebreaking] was abysmal last year,” Weakley said. “Five of the nine icebreakers [assigned to the Great Lakes] were inoperable” and numbers from the previous five years were about the same, so this is not a new occurrence.

Weakley traced the problem to a decision to not replace old engines on vessels that were part of the Coast Guard’s service life extension program for the 140-foot vessels used for most icebreaking on the Great Lakes. “That would have streamlined” operations in the winter, improved reliability and also provided better access to spare parts for maintenance. Finding parts for the older engines is difficult, he said, in explaining how vessels recently out of SLEP broke down and were back in for months-long fixes rather than breaking ice.

USCGC Mackinaw (WAGB-83) was “a single point of failure” waiting to happen, Weakley said because there is no back-up icebreaking capability if the cutter is taken offline. “We need a second Mackinaw-size [icebreaker]” to keep mines along Lake Superior still shipping ore open as long as possible before it freezes over causing shutdowns of steel mills in Gary, Ind. “We don’t need a Polar,” referring to the heavy icebreaker to be built for duty in the Arctic and Antarctic, to do that mission.

“Cost-cutting has an impact on us,” Weakley said.