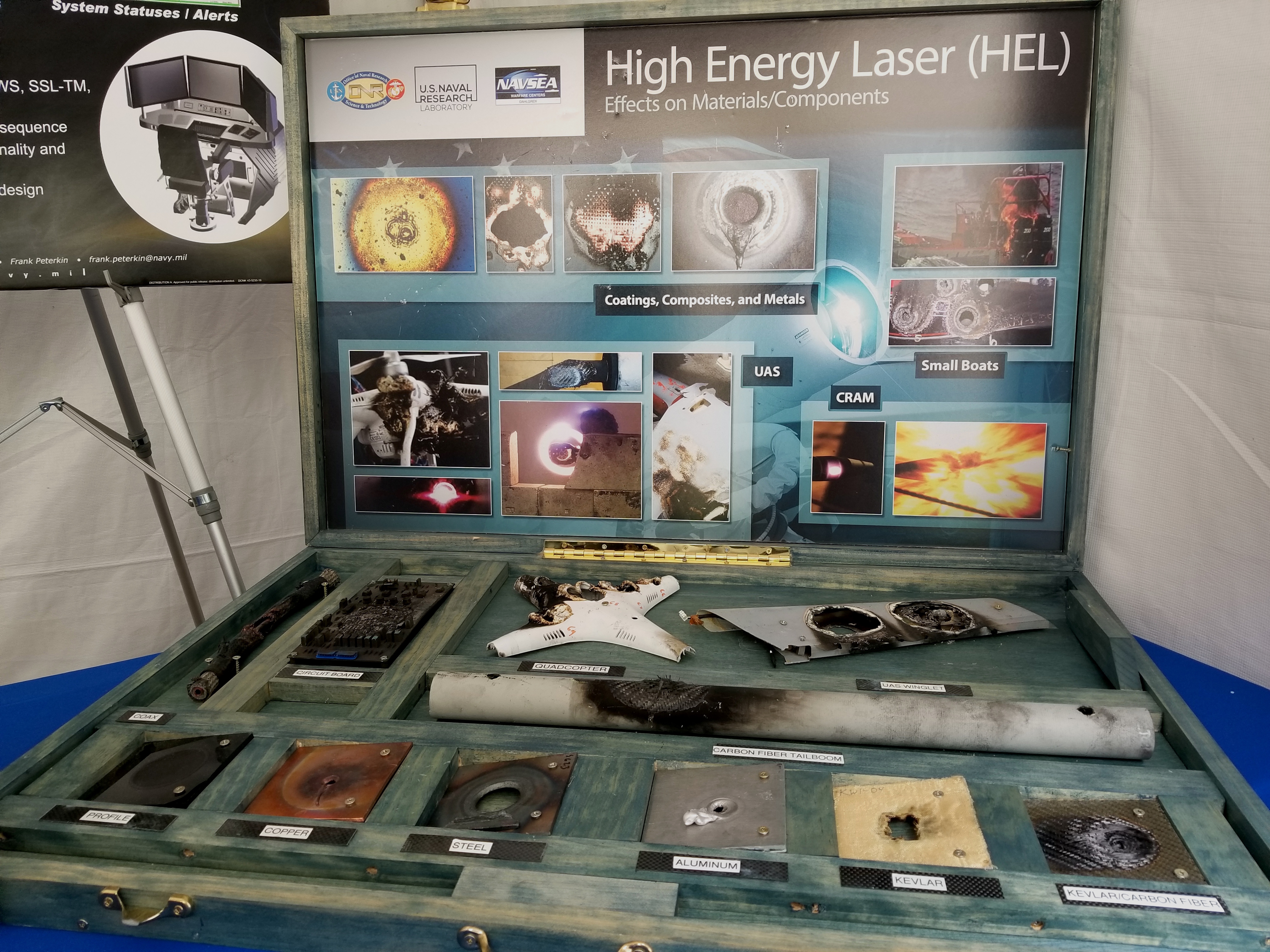 The Office of Naval Research highlights the results of some laser weapon tests, showing the damage that its in-development Solid State Laser- Technology Maturation system did to various unmanned systems, metals and more. USNI News photo.

The Navy will field versions of both its highest-power laser weapon and its low-end non-lethal laser dazzler later this year, gaining operational experience with directed energy weapons that will continue to focus engineers’ efforts building out the Navy Laser Family of Systems (NLFoS).

The family of systems has four parts, including three weapon systems that will eventually go on ships: the Solid State Laser – Technology Maturation system (SSL-TM), which will eventually be a 150 kw laser weapon on amphibious ships; the High Energy Laser and Integrated Optical-dazzler and Surveillance (HELIOS), a planned 60 kw laser weapon that will see its first test on an Arleigh Burke-class destroyer in 2021; and the Optical Dazzling Interdictor, Navy (ODIN) that will also go on a destroyer.

Frank Peterkin, the Navy’s senior technologist for directed energy, told USNI News late last month that both SSL-TM and ODIN would see at-sea time this year to allow sailors and engineers to begin learning how the technology performs at sea and how to employ and maintain the weapon at sea.

“We’re not fielding these in large numbers, but we’re fielding them – and it’s an important step, I think, because we get a lot of operational feedback that we would never get otherwise,” he told USNI News during a DoD Lab Day at the Pentagon.
“You can do everything in the world to understand how you think laser weapons are going to be used, but you put this controller in the hands of a sailor who’s going to play with it and do the thing they do with the operational interface, and then they’re going to decide to use it in ways we can’t imagine. Plus, we’re exercising logistics, training, the safety assessments that have to happen. So we burn down a lot of that operational learning and operational risk by forcing these out to the fleet. And they do provide some (warfighting) capability, it’s just not the capability of having one on every ship.”

The SSL-TM project by the Office of Naval Research has taken lessons learned from the 30 kw Laser Weapon System (LaWS) that was installed on the afloat forward staging base USS Ponce (AFSB(I)-15) and applied them to the 150 kw Laser Weapon System Demonstrator. The San Antonio class of amphibious transport dock (LPD-17) – and USS Portland (LPD-27) specifically – was chosen to host this highest-power laser weapon due to the ship’s available power and space margins. Other ships, like the Arleigh Burke DDGs that will host a smaller laser, had less margin to support this power-intensive weapon.

Peterkin said recent efforts to further develop the SSL-TM have focused on the beam director and spectral beam combining, which takes many lasers of different wave lengths and creates a more powerful beam by “ganging them up.”

The newest version of this weapon system is in late stages of integration at the Northrop Grumman facility in Redondo Beach, Calif. Most subsystems have been built and the laser itself has been fired in the lab, Peterkin said. The weapon system still needs to prove its tracking capability, and after tracking tests at the Northrop Grumman facility, it will be moved to land-based testing and then on to Portland later this year, he said.

Once installed on the ship, the Navy will learn much about laser weapons through SSL-TM testing. Though the laser installed on Portland won’t be the final iteration of this project, Peterkin said the Navy can start learning more about how the crew would decide when to use the laser weapon versus a kinetic weapon, how the laser and its optics hold up while in close proximity to the vibrations and gases coming from missile launches, and more.

“We don’t want to wait for the next step to learn this stuff that we can learn now,” Peterkin said.
“This won’t change just because we go to a higher power laser. So we can burn down a lot of this operational risk, not just for the interactions and the interface but also being in close proximity to other weapons. And how do you coordinate, how do you decide what to shoot and when, things like that.”

With more support for directed energy weapons in the Fiscal Year 2020 budget request by the Navy – though the final budget is still being developed by Congress – as well as support from Chief of Naval Operations Adm. John Richardson to field this weapon “as soon as possible,” Peterkin said more money could equal more learning on Portland.

With LaWS on Ponce, he said, “if we faulted ourselves for anything, it was probably, we didn’t put enough focus on operational experimentation in the field. So if we were getting more resources – I have no idea whether we will or not – we have all kinds of areas we want to learn while we’re on that ship. Not just technical, but tactics and operations, logistics, the impact of the maritime environment. So yes, the bottom line is, the funding will allow us to learn more.”

Peterkin also told USNI News that the ODIN dazzler would go on an Arleigh Burke destroyer this year, but he could not say how many systems would go out, on what timeline, or on which ships.

HELIOS is under contract with Lockheed Martin and has moved from the research community into a program managed by the Program Executive Office for Integrated Warfare Systems.

All the components of the Navy Laser Family of Systems will be fed into an eventual Increment 2 and Increment 2 version of NLFoS as the technologies mature.

In parallel, another directed energy effort the Navy is undertaking is the High Energy Laser Counter- Anti-Ship Cruise Missile Program (HELCAP), Peterkin said. Though not formally part of NLFoS today, it seeks to provide area defense by tracking a cruise missile and burning a hole in the side of it as it passes by. Peterkin said using lasers for self-defense against a cruise missile will be harder – the nose of the missile is meant to withstand significant heat from its high speeds, meaning a laser’s heat wouldn’t be effective – but as the area defense capability and eventually self-defense capability come online, they will be fed into later increments of the laser weapon family of systems.