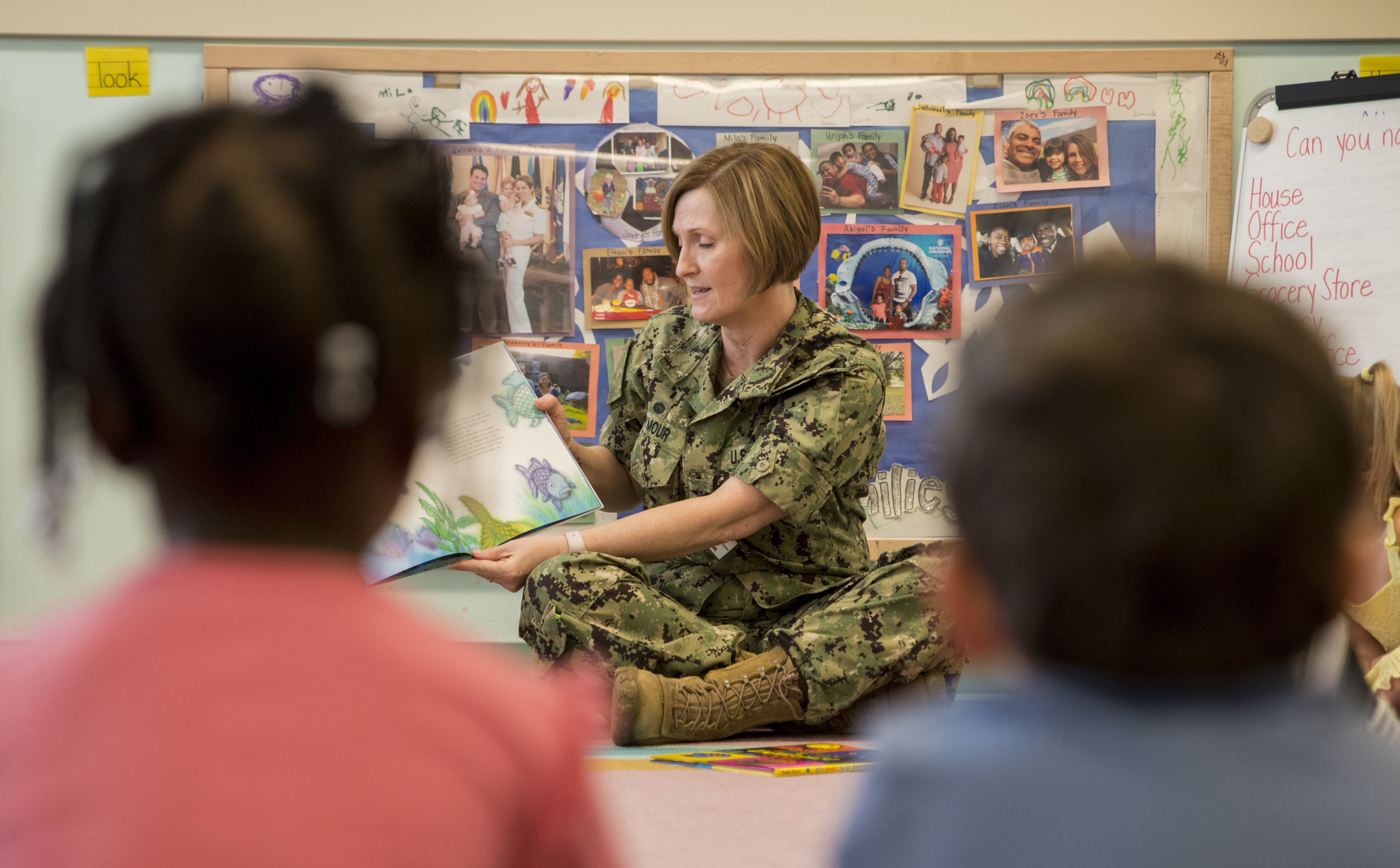 The Navy has 9,000 infants and toddlers that its child care centers don’t have room for, and the service is now seeking help from off-base facilities in fleet concentration areas as that wait list shows no sign of shrinking.

Providing affordable child care is a major concern affecting the Navy’s ability to retain active duty personnel and maintain appropriate readiness levels among the force, the Navy’s leadership has repeatedly stated during appearances at think tanks, before lawmakers on Capitol Hill and when addressing the fleet in person and during online townhall events.

In 19 states where the Navy has bases or significant operations, 38,375 Navy family infants and toddlers attend on-base child care centers. As families enter the annual permanent change of station moving season, the waitlist for attending these facilities has grown to 9,298 infants and toddlers; six months ago the waitlist stood at 8,720 youngsters, according to Navy Installations Command data obtained by USNI News.

“Lack of available and affordable child care is a national issue for our generation; for our Navy, it is a critical readiness issue,” Master Chief Petty Officer of the Navy Russell Smith said in written testimony submitted in February to the Senate Armed Services subcommittee on military personnel.
“Our Navy simply cannot afford to lose valuable training hours because of worry and uncertainty over whether their children are in a secure, safe and comfortable setting. We also can’t afford to lose talented sailors who decide, as some have already done, that the Navy is incompatible with having a family.” 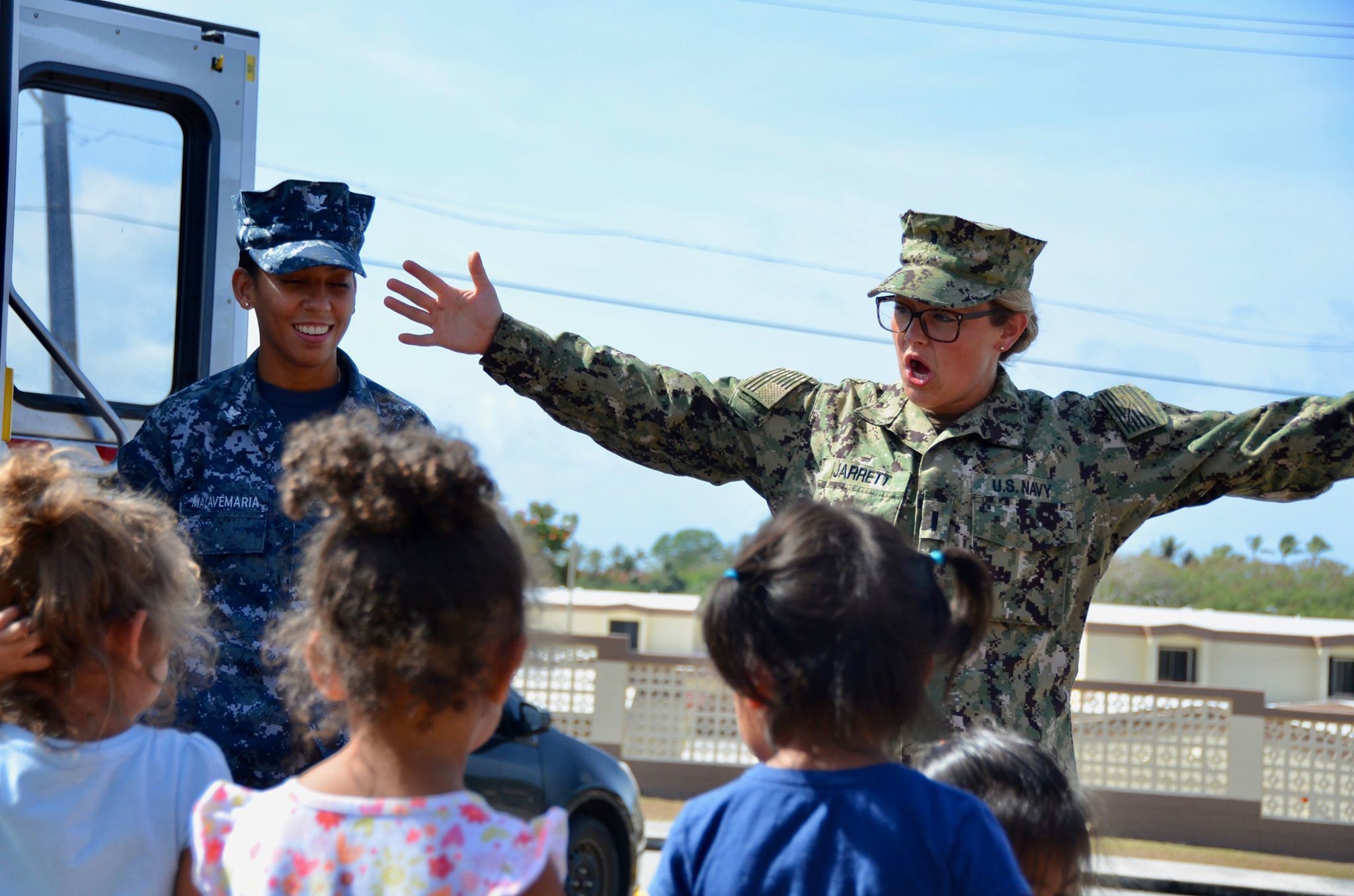 The bulk of the children on the Navy’s child care facility waitlist live in the states with Navy’s largest fleet concentration centers: California; Virginia; Hawaii; the Washington, D.C.-area; and the state of Washington, Stephen Cutler, the deputy director of public affairs for the Commander of Navy Installations Command (CNIC), told USNI News.

“The Navy’s daycare waiting lists are due to capacity shortfalls, both Navy and community-based,” Cutler said in an email. “We are currently pursuing community partnerships to increase child care capacity in our fleet concentration areas, where our waiting lists are predominately isolated.”

“We have released a series of Request for Information notices in the following areas: Washington D.C.; Norfolk, Va.; San Diego, Calif.; Pearl Harbor, Hawaii; and Kitsap, Wash.,” Cutler said. “These information requests were sent to all public and private organizations interested in partnering with the Navy to benefit both sailors and communities.”

As CNIC receives responses from child care providers in these fleet concentration centers, Cutler said the Navy will develop models to add child care capacity for Navy families in these areas.

Increasing child care capacity, though, is not as simple as just increasing funding. To illustrate the complexity of the childcare challenge facing the Navy, Smith used the example of Naval Air Station Lemoore, Calif., which is located in a high-cost state but nearly an hour from the closest population center of Fresno, Calif.

“In order to keep 24/7 flight line operations working in a place like Lemoore, Calif., I have to figure out how to provide childcare that’s affordable,” Smith said while speaking in January at a U.S. Naval Institute event at the Center for Strategic and International Studies. “That’s really becoming the big conundrum for us.”

“We are looking at other options, partnerships with community partners to see what we can do to add capacity and space,” Smith said during a Facebook Live all hands call in February.

During the next two fiscal years, the Navy plans to add about 1,000 spaces, Smith said during the Facebook Live event. The additional spaces will mostly be located in off-base facilities, according to Cutler.

The Navy’s entire FY 2020 child care budget request is for $274.9 million, which includes funding for on-base child care centers, subsidies for use off-base, youth programs, care for school-age children, overhead and maintenance costs of child care facilities, according to CNIC. 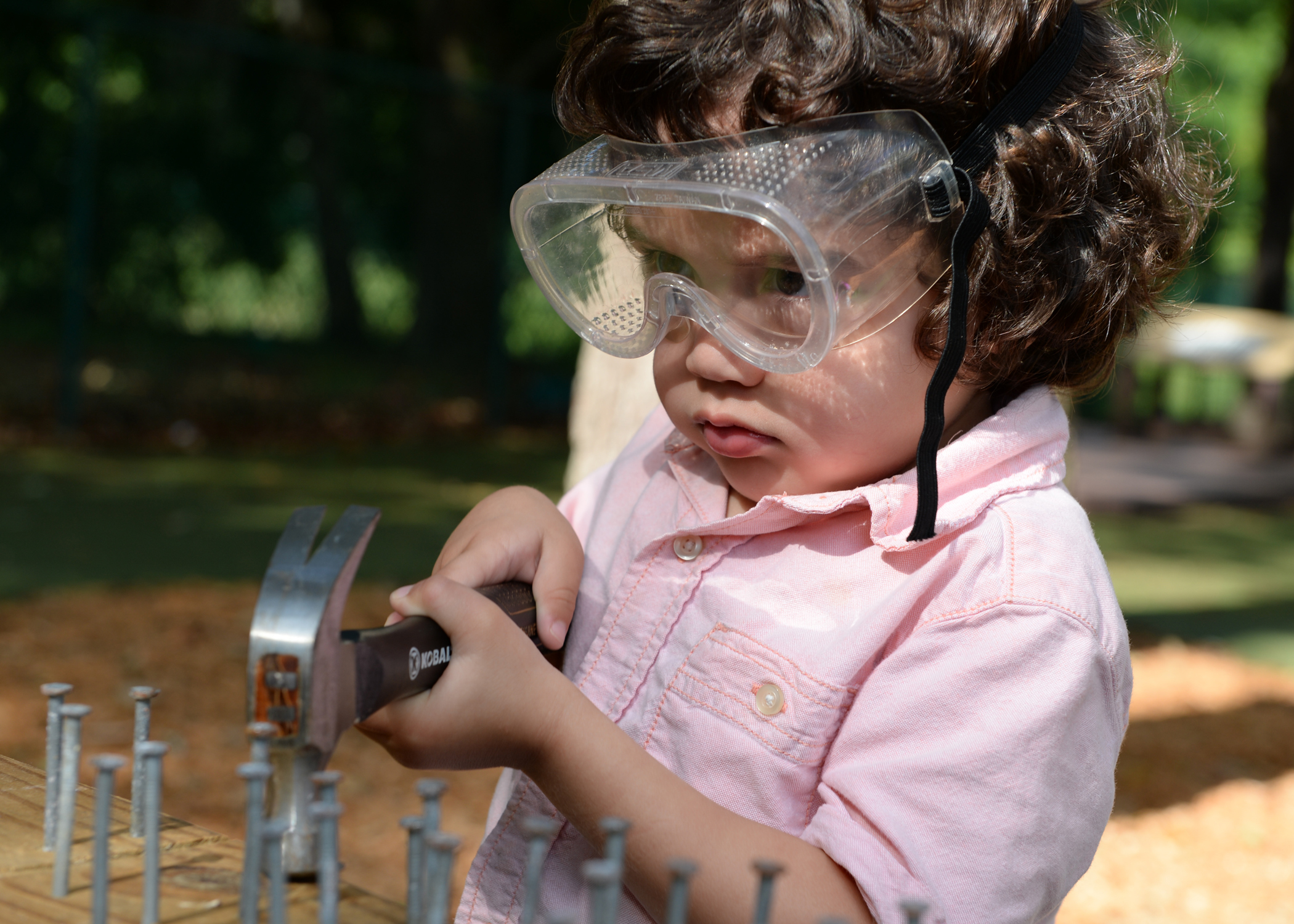 A pre-schooler at the Navy’s Mayport, Fla., Child Development Center hammers nails into wood during a woodworking day in 2015. US Navy Photo

“One of the toughest problems that we have with childcare is that it’s a nationwide problem. It’s not just a Navy problem,” Smith said during the Facebook Live event. “So, the Navy, because of our footprint, is actually in some of the hardest-hit areas for providing childcare. Even if we were to provide greater subsidies, the in-town market is not necessarily going to be able to support what you want.”

The communities Cutler said CNIC is considering off-base options for Navy families also happen to be among the most expensive in the nation for child care, according to statistics collected annually by Child Care Aware of America, a non-profit child care advocacy group, and the organization administering the Navy’s child care subsidy program.

Washington, D.C. tops all states – those with and without Navy child care centers – with an average annual child care cost of $23,666 per child. In the surrounding suburban counties, including Arlington, which is home to the Pentagon (which no longer has an onsite child care facility), the cost is nearly as expensive, averaging close to $19,000 per child, according to Child Care Aware.

In comparison, according to the military’s child development center FY 2019-2020 fee sheet, the annual full-day cost per child to attend an on-base child care facility is between $3,264 and $8,160. 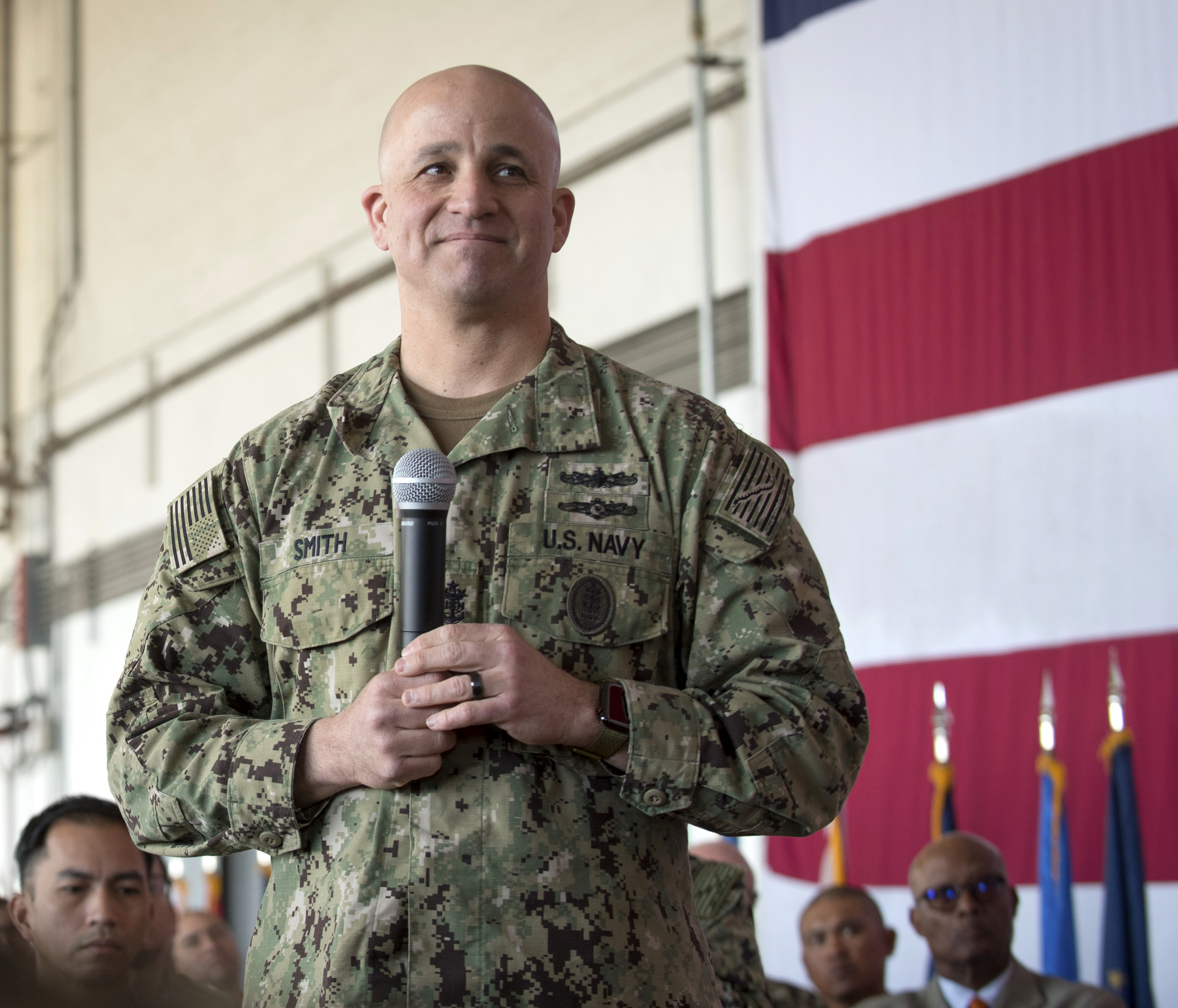 The Navy does have a back-up plan for families waiting to get a spot in an on-base childcare facility. Child Care Aware of America administers the Navy’s subsidy program that helps pay for childcare until a spot opens at the on-base facility.

However, there’s a catch: the Navy’s subsidy program currently does not have enough funding to meet the demand. There’s a waitlist to get financial aid to cover outside services while on the waitlist to get into a Naval base child care facility.

“Just so you know, we are maximizing our capacity for NACCRRA, so it’s one out, one in,” Smith said during the Facebook Live Town Hall, using the acronym for National Association of Child Care Resource and Referral Agencies that commonly used to refer to the subsidy program.