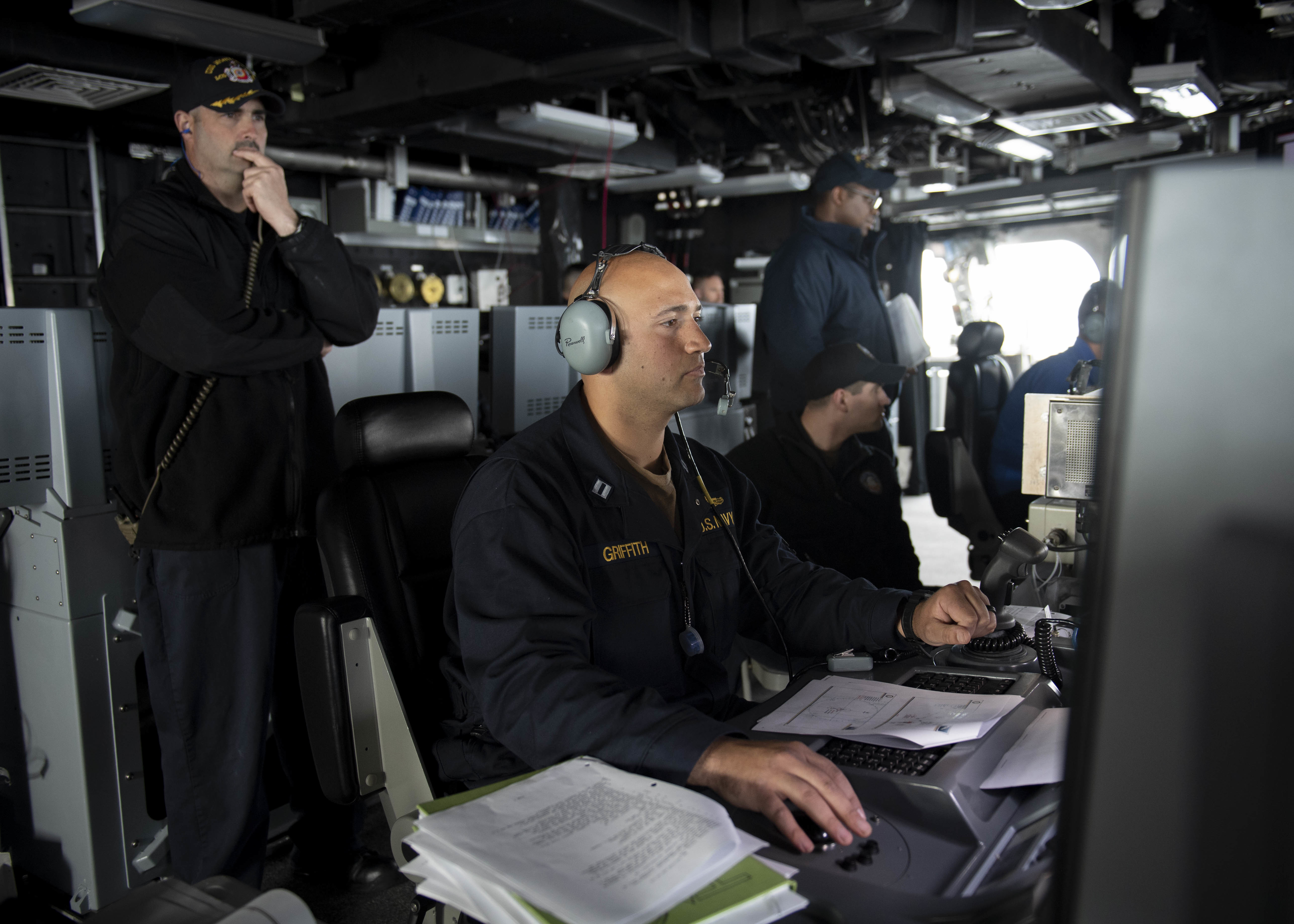 The Navy conducted its first advanced tactical training event with the Littoral Combat Ship, ahead of USS Montgomery’s (LCS-8) deployment to the Pacific later this year.

Montgomery’s training event was a smaller version of the Surface Warfare Advanced Tactical Training (SWATT) events that cruisers and destroyers (CRU/DES) and amphibious ships go through ahead of their deployments. Montgomery conducted its five-day at-sea training with just one other LCS and a replenishment oiler, Lt. Cmdr. Nick VanWagoner, the lead planner for the LCS SWATT and a surface warfare/anti-submarine warfare (SuW/ASW) warfare tactics instructor (WTI), told USNI News.

The next two LCS crews to deploy, however, will be included in a larger cru/des SWATT event this summer, as the Naval Surface and Mine Warfighting Development Center (SMWDC) learns more about the capabilities and limitations of the LCS and how to ensure the crews are trained for both solo and larger formation operations.

“What the demand signal was for USS Montgomery was really no different than what it is for our cru/des ships that deploy in strike groups or our amphibious ships that deploy in amphibious ready groups. The intent was to prepare that ship for when she deploys, no matter how the fleet commander chooses to employ her, to effectively integrate and operate with other ships, platforms and warfare commanders,” VanWagoner told USNI News.

When Montgomery deploys in the coming months, it will be different than other surface ships in the fleet: it will have a minimally manned crew of about 70 or so sailors, compared to about 350 on destroyers; it will have just a surface warfare mission package onboard compared to the multi-mission cruisers and destroyers; and its Blue Crew, which went through the recent SWATT event, will rotate with a Gold Crew every four to six months to keep the ship hull forward for about 16 months at a time.

VanWagoner said the first LCS SWATT sought to address some of those issues, including what a small crew size meant for the endurance of the ship during high-tempo operations and the ability to execute one event while planning ahead for the next mission.

“LCS has different endurance capabilities than a ship that’s manned with 350 sailors. And so the crew of that ship has to deliberately plan around those capabilities to ensure that they can meet mission. That was one of our focus areas actually during the advanced tactical training we provided – when the ship’s crew was faced with conducting a number of fairly complex tactical scenarios back-to-back, ensuring they were executing their PBED (plan, brief, execute, debrief) process underway and being ready to execute the following event. It was something that we had to be deliberate about, but it didn’t hamper our operations at sea,” he said.

“[The LCS’s] man, train and equip process is a little bit different than what we use for cru/des or amphibious ships today, and there was some learning from our perspective on the planning process to ensure that as we scheduled events or as we were designing exercises that we accounted for some of those differences,” he added.
“But at the end of the day they ended up not being very significant. We learned a lot about what the ship’s combat system’s capabilities are and are excited to see her deploy in support of tasking.”

Whereas cruisers and destroyers are expected to conduct offensive and defensive missions on the surface, in the air and under the sea, the LCS will only carry one mission package at a time, with Montgomery deploying with just a surface warfare mission package. Still, VanWagoner said SMWDC wanted to test the ship’s abilities to defend itself in other domains, particularly in anti-air warfare.

The LCS’s capabilities are limited compared to a destroyer, he said, and “that’s going to color its ability to conduct sustained regional air defense. But we designed exercises to ensure that, should they need to, they could integrate into a fleet air defense construct and execute point defense procedures to protect themselves while deployed.” 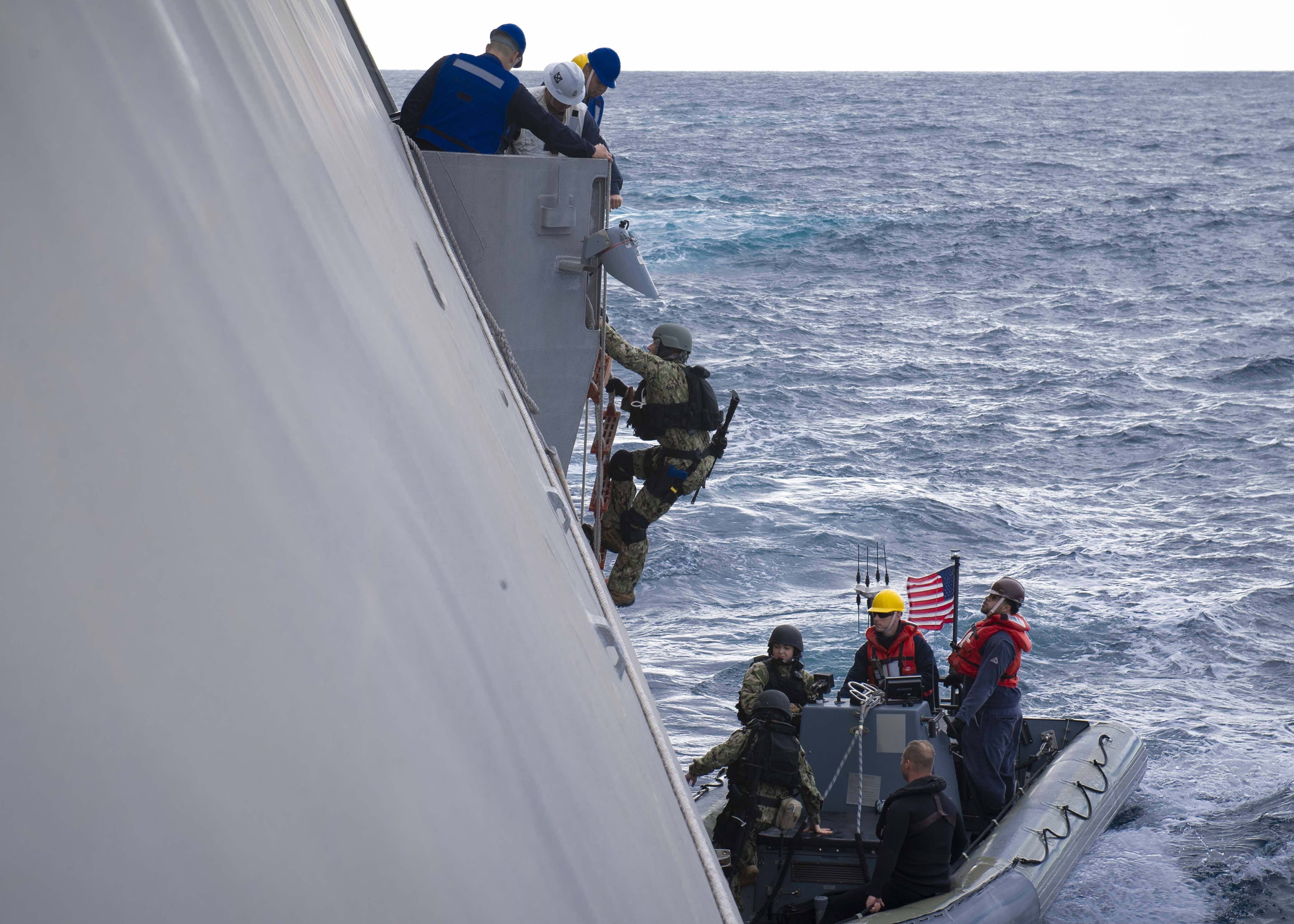 A member of the visit, board, search and seizure team boards the Independence variant littoral combat ship USS Montgomery (LCS 8) during a training exercise aboard the ship on April 21, 2019. US Navy photo.

The Surface Division 11 staff took tactical control of Montgomery during one part of the exercise and also filled the role of warfare commander for part of the exercise, to simulate how Montgomery might be asked to fall under another organization once in theater. Montgomery had Helicopter Sea Combat Squadron (HSC) 23 embarked with its MH-60S helicopters, as well as the MQ-8 Fire Scout.

Additionally, the crew got to conduct life-fire events with the crew-served weapon and the mission package’s 30mm gun. As a capstone event, the crew used the SeaRAM missile defense system and defeated the threat in the first salvo, VanWagoner said.

“All of the live-fire events were very successful, expended a bunch of ammunition, employed their weapon systems against threats that we presented to them during the exercises.”

Montgomery also conducted a refueling at sea with USNS Rappahannock (T-AO-204) towards the end of the SWATT, VanWagoner said.

“Other ships, platforms, the [composite warfare commander] construct – all of that is very important to SMWDC’s methodology as we receive ships out of the basic phase and prepare them for fleet integration,” he said. 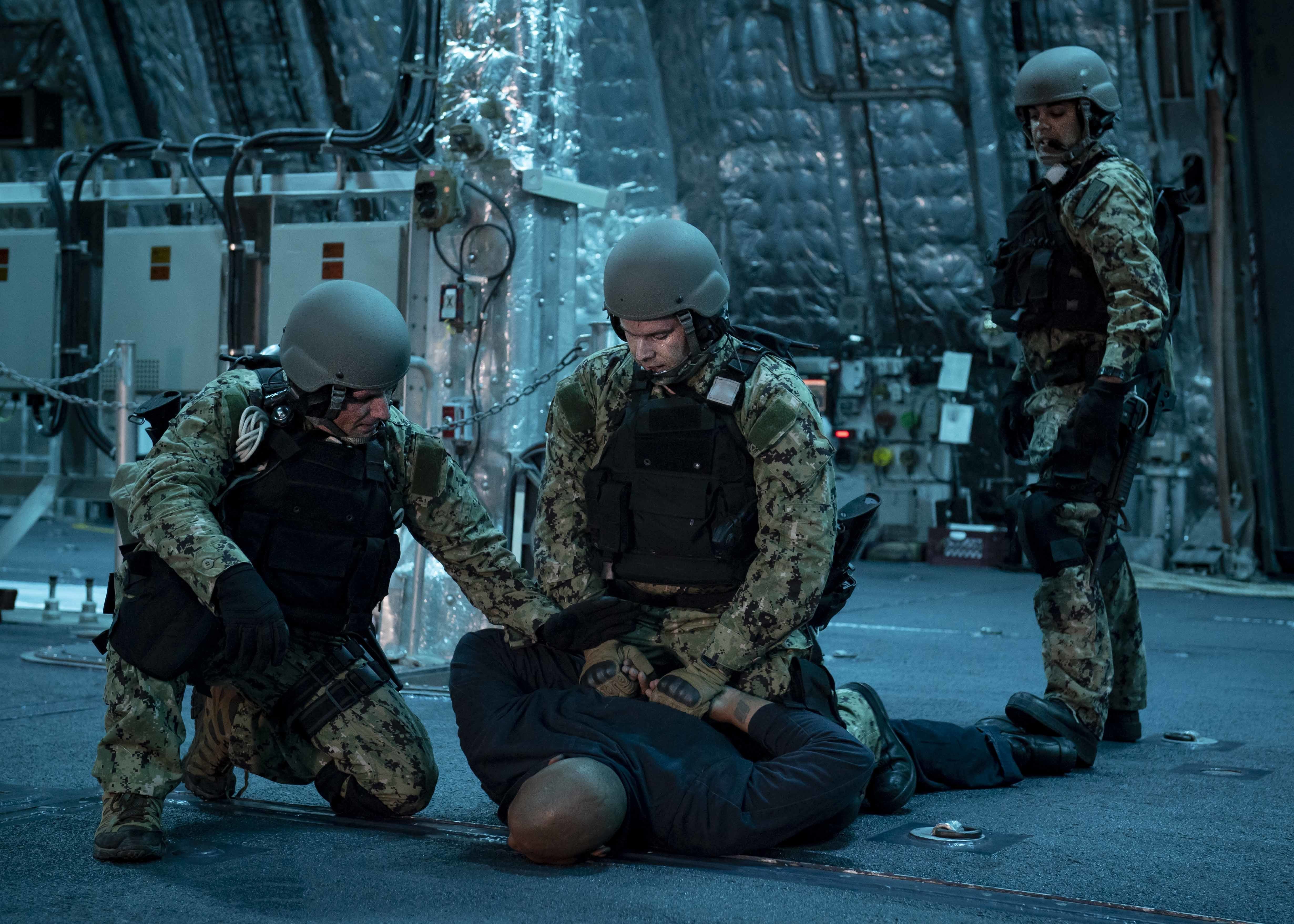 This summer, two LCS crews – the first deploying crew of USS Gabrielle Giffords (LCS-10) and the Gold Crew of Montgomery embarked aboard training ship USS Jackson (LCS-6) – will conduct a SWATT with a carrier strike group’s surface ships “and see how those (LCSs) do operating in a little bit more complex CWC construct and operations at sea,” VanWagoner said.

Ahead of that larger event, he noted, “some of our focus is going to be on preparing the warfare commanders and ensuring that they understand capabilities and limitations of these platforms that they have to employ.”

Asked what the SWATT training demand signal hinted at for what to expect from the first LCS deployment abroad since the LCS fleet was reorganized, VanWagoner said, “I can’t anticipate fleet commander tasking for that platform when she’s in theater. We intended and were successful in providing training that allowed her to be capable and flexible to meet many taskings. But what we observed embarked on USS Montgomery was a capable platform and a very capable crew that is going to be successful in executing a wide number of missions.”