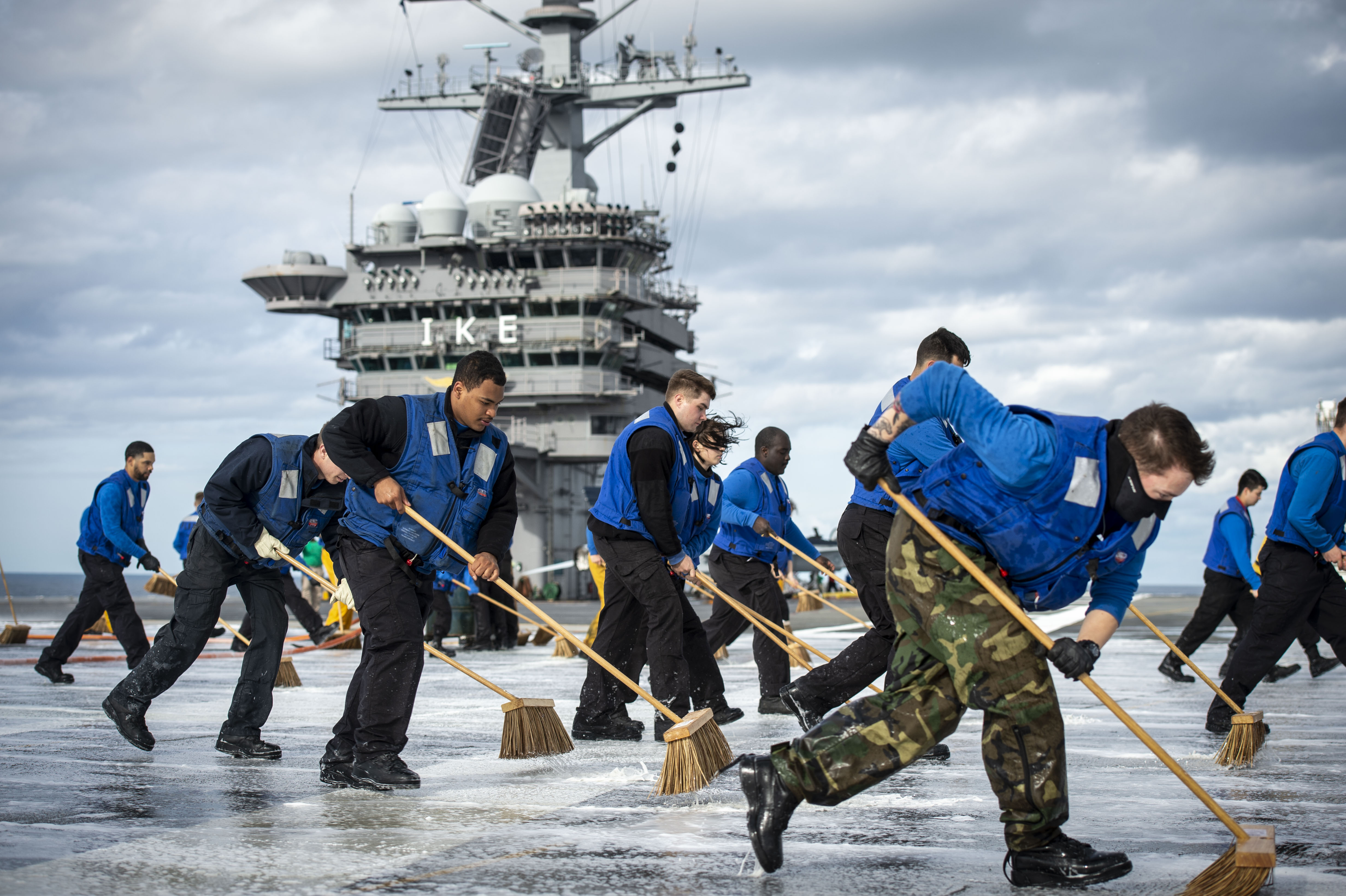 Sailors scrub the flight deck after a countermeasure wash down aboard the aircraft carrier USS Dwight D. Eisenhower (CVN-69) during an underway in the Atlantic Ocean on March 30, 2019. US Navy Photo

“The ship conducted the sea trials off the Virginia coast alongside engineers and shipyard employees from Norfolk Naval Shipyard (NNSY), running through a checklist of evolutions, including conducting small-boat operations, testing countermeasure wash-down systems, executing high-speed turns, and testing catapults,” reads a Tuesday statement from the Navy.
“While shipyard workers tested out systems, sailors evaluated their readiness to become an operational crew, conducting numerous drills to test their mettle in various areas such as damage control, deck seamanship and flight deck operations.”

The brief five-day sea trials followed the completion of a maintenance availability that was supposed to last six months but tripled in length due to unforeseen maintenance issues that cropped up during the repair period.

Now the ship and its crew will enter a period of basic training in preparation for a future deployment as part of the Navy’s Optimized Fleet Response Plan along with other assets that are part of Eisenhower Carrier Strike Group. Under OFRP, the strike group’s basic, advanced and integrated training schedule would have them ready to deploy as early as this fall.

“Our investment in our ship paid off, and now the real work begins: getting the flight deck certified so we start doing what this warship was built to do – launch and recover aircraft,” ship commander Capt. Kyle Higgins said in a statement.

The strike group includes “the Ticonderoga-class guided-missile cruisers USS Monterey (CG-61), USS San Jacinto (CG-56), and USS Vella Gulf (CG-72); the ships and staff of Destroyer Squadron (DESRON) 26; and the squadrons and staff of Carrier Air Wing 3,” the Navy said in a statement.

The 41-year-old Eisenhower has been a workhorse for the service and been among the most heavily used in the fleet. In the last decade, the carrier has deployed five times. The Navy blamed the heavy deployment schedule for an earlier Ike maintenance availability stretching from a planned 14 months to 24 months.