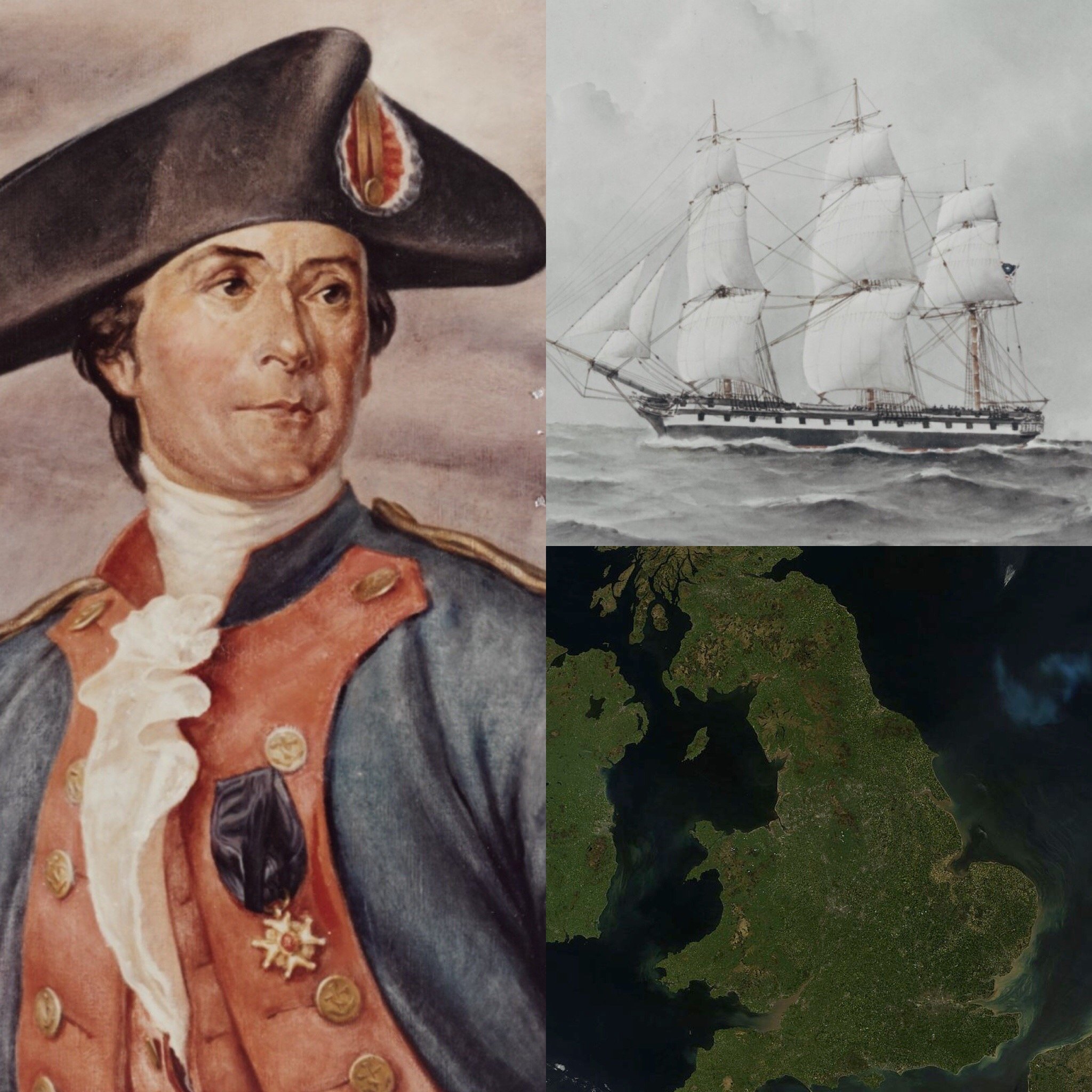 John Paul Jones, USS Bonhomme Richard and a satellite image of the U.K.

A British raconteur says he found the wreckage of Capt. John Paul Jones’ flagship, USS Bonhomme Richard, but across the Atlantic historians and Navy officials aren’t as certain.

In November, a five-person team at Merlin Burrows, an English satellite imagery firm, announced they had pinpointed the wreck of Bonhomme Richard close to the Yorkshire shore.

“We go find stuff. We don’t look for it,” Blackburn told USNI News in a telephone interview earlier this year. “If there’s a myth and legend and historical principals, we’ll fire up the satellite.”

The British tend to take a less sentimental view of John Paul Jones – he’s considered more of a pirate – than how he’s revered in the U.S., Blackburn said. Still, he is thrilled about the find, because the Jones story is compelling. The battle against Serapis is where Jones issued his famous response to the suggestion he surrender, saying “I have not yet begun to fight.”

Jones’ words have served as the model of grit and determination for generations of sailors in the Navy he’s said to have fathered. Definitively finding his flagship’s wreck, Blackburn said, could be a boon to the local tourist industry and a great bit of marketing for his firm. 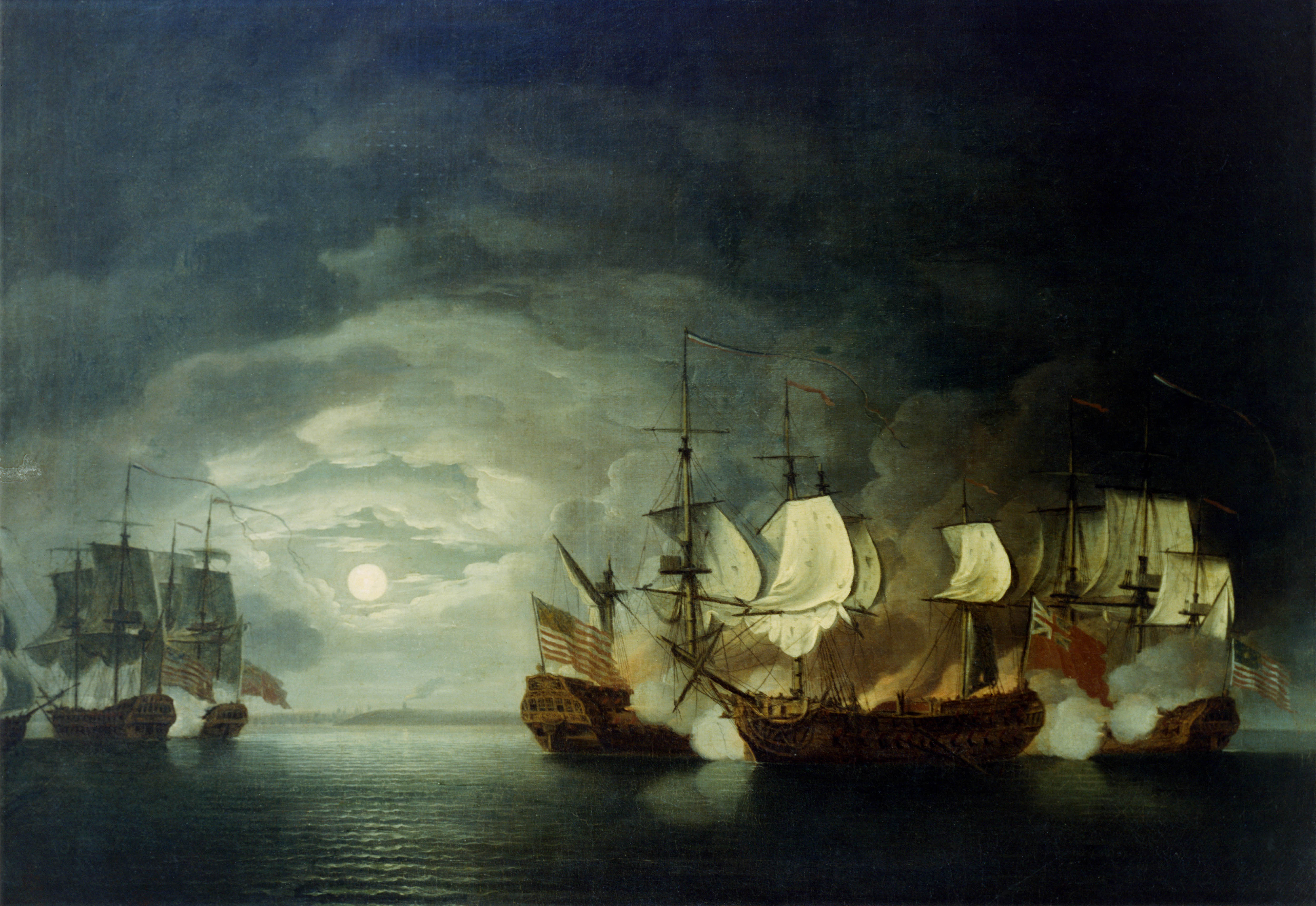 Across the Atlantic, though, U.S.-based researchers who have for decades searched for Bonhomme Richard say not so fast.

Ryan, vice president of the Mystic, Conn., Global Foundation for Ocean Exploration and the foundation’s lead Bonhomme Richard researcher, has worked with U.S., British and French navy officials since 2006 to find the wreck. Wooden shipwrecks, such as the one Blackburn found, litter the seafloor close to shore along the eastern coast of Great Britain, Ryan said. Some probably date as far back to Viking times.

Finding timbers dating from the 1700s provides circumstantial evidence that the wreck might be the right age but doesn’t prove its identity, Neyland said. Otherwise, from what he’s seen in media reports, Neyland thinks Blackburn’s proof is thin.

“We’ve been in contact with Historic England and they didn’t think it was worth a survey to verify,” Neyland said.

However, as searches move further away from the coast, Ryan said shipwrecks tend to be found further apart and tend to be modern in design – made of steel and with engine components. Ryan said this part of the coast is called torpedo alley because of the abundance of shipping sunk by German submarines during both World Wars.

In the middle of torpedo alley, Ryan’s team found in 2012 what she says is definitively a wooden shipwreck. They’ve found an anchor that corresponds in size to one believed to have been on Bonhomme Richard and rigging material including a spar and a deadeye with a lanyard still preserved that suggest the wreck is from an appropriate era to be Bonhomme Richard.

“We know we have a wooden sailing ship. We haven’t found any evidence of anything modern,” Ryan said.

Based on the history of Bonhomme Richard’s engagement with Serapis, Ryan said both ships moved toward the horizon. Jones, in victory, took over Serapis and salvaged what he could from Bonhomme Richard, which was severely damaged and drifting with the current.

“Why would a wooden ship sink that far offshore when it hadn’t run up against a rock or reef?” Ryan asks.

The answer is simple, Ryan said. The wreck her team found suffered damage in battle, such as the one recorded between Bonhomme Richard and Serapis.

“Common sense tells you if the ship sunk close to shore it would’ve been found,” Neyland said.

Sticking to his Story 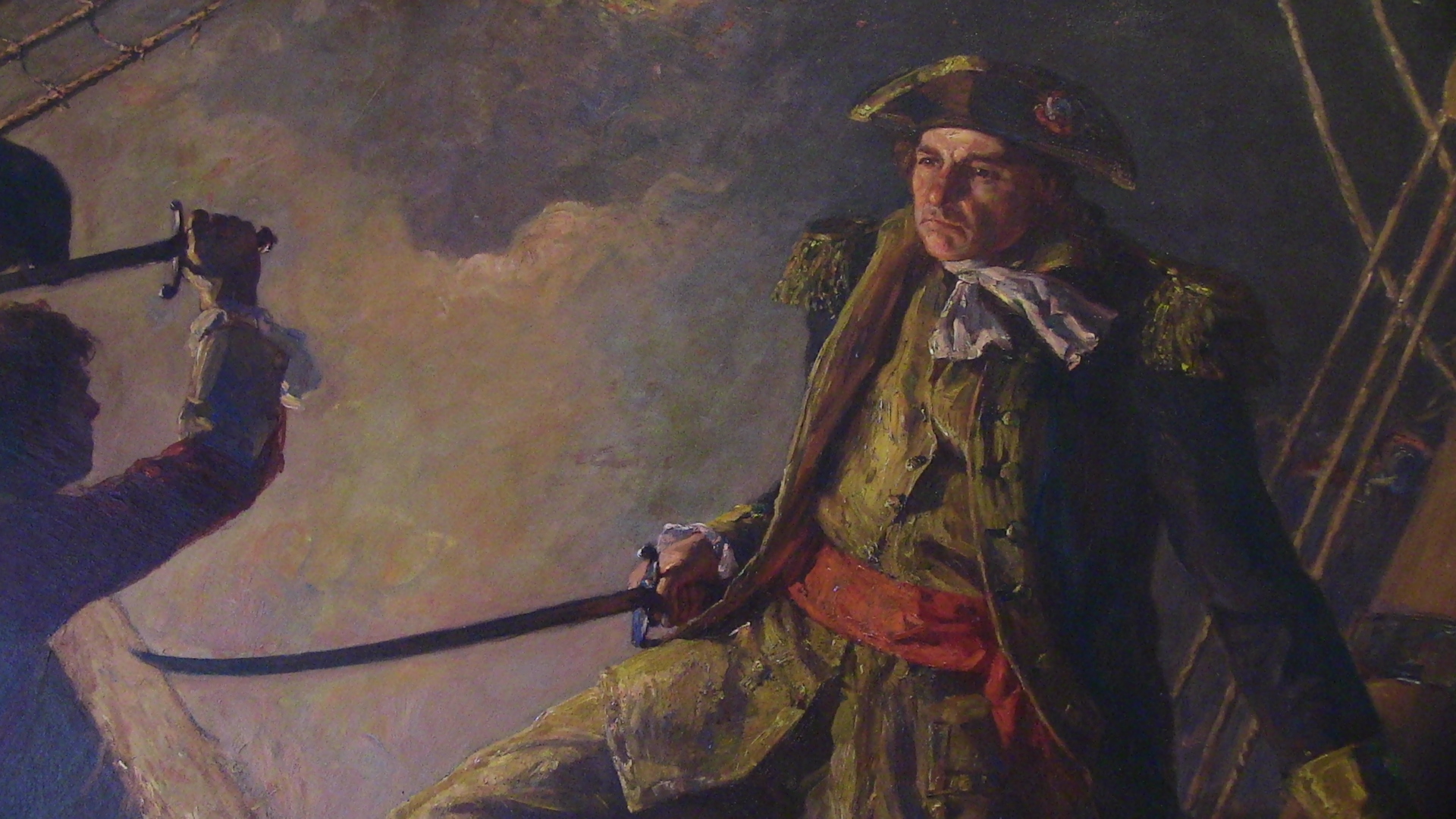 Blackburn knows other researchers are skeptical of his findings. Their hesitation, he says, is caused by a belief that Merlin Burrows is a disrupter to the heritage industry – those looking for sea wrecks or land-based archaeological sites.

“It’s obviously a bitter pill to swallow. Their ladder is up against the wrong wall,” Blackburn said about the skeptics. “We don’t expect them to be jumping for joy, but our discovery of the Bonhomme Richard is 100-percent absolutely true.”

Other researchers, Blackburn says, rely on fundraising to bankroll expeditions that may or may not yield results. The firm follows what Blackburn described as a transactional business model. Using satellite and X-ray data, Blackburn says he can provide historians and treasure hunters precise coordinates of where to search – but for a price.

“The etiquette is, whoever owns or has title of the wreck would reimburse the finder,” Blackburn said.

It’s not clear how much revenue Merlin Burrows is bringing in. Blackburn owns a minority 20-percent stake in the company, and another investor owns the remaining 80 percent, according to incorporation documents filed with the British government. Blackburn told USNI News the financial backing from the other shareholder is not enough to fund Merlin Burrows’ operations.

Blackburn offered to sell his data to the U.S. Navy, considered the owner of Bonhomme Richard.

“We were going to charge money,” Blackburn said. “We are a business.”

Paul Taylor, a spokesman for the Naval History and Heritage Command, provided USNI News with a statement about Blackburn’s offer.

“We are interested in hearing further details, look forward to examining data collected from the site, and, if Bonhomme Richard is located, would be very interested in ensuring the wreck is protected,” the statement said.

Value of The Find 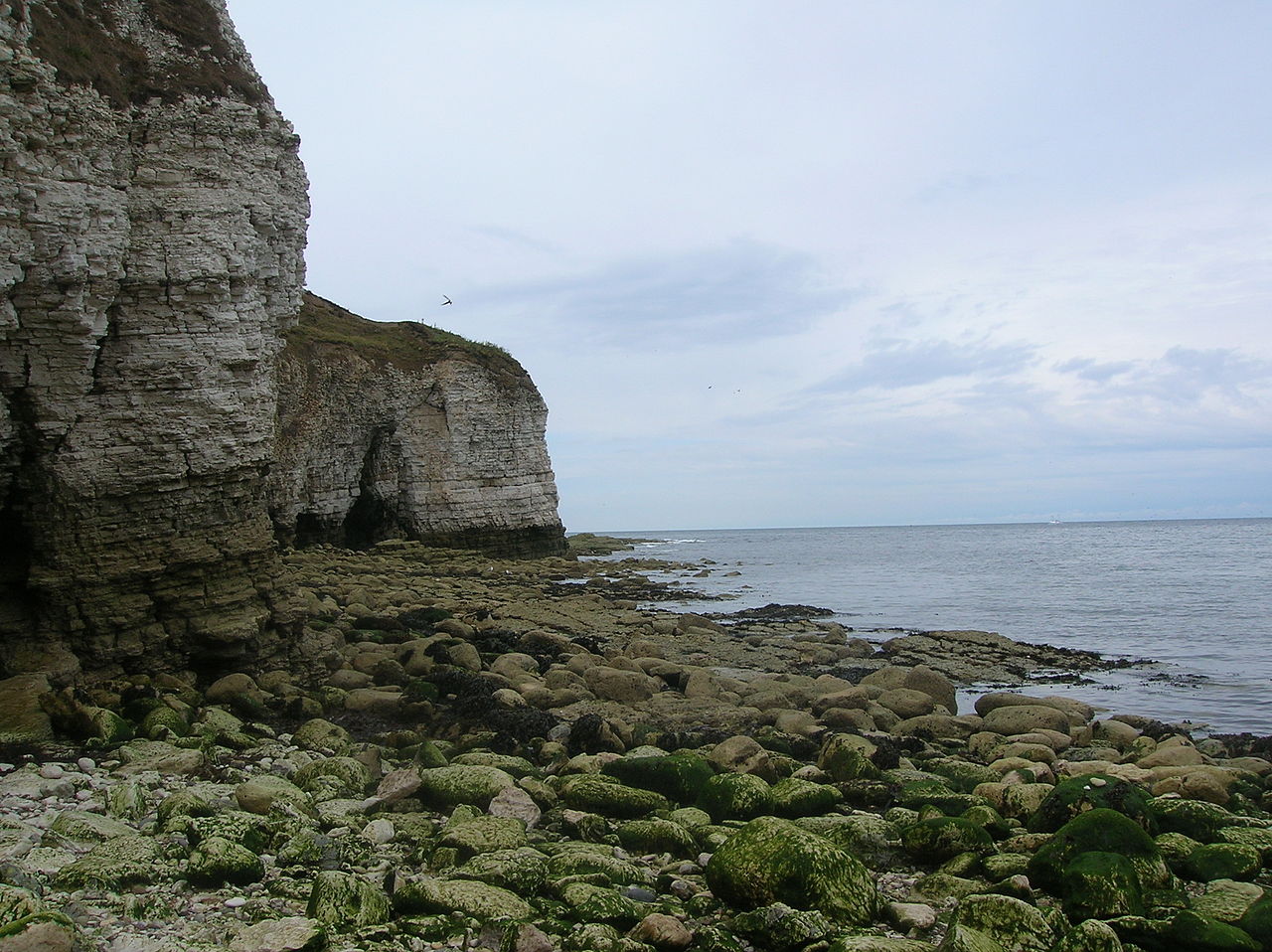 Cliffs at Flamborough Head in 2010. Photo via Wikipedia

For Blackburn, more than recouping money for the search, he sees locating Bonhomme Richard as a potential boon to tourism in his home of North Yorkshire, where Blackburn has a stake in a variety of small businesses in the area, according to incorporation documents filed with the British government.

For Ryan, finding Bonhomme Richard offers the potential to get a first-hand glimpse at what life was like for sailors at the birth of the U.S. Navy. The wreck her team found is mostly buried by compacted sediment, which hopefully kept the ship’s remnants well preserved.

Ryan hopes the find will improve the understanding of what ships during the period were like, especially the technology to retrofit what was originally a merchant ship into the warship Bonhomme Richard. For example, Ryan said Jones insisted on using used iron knees to brace the ship and iron ballast, a rarity for the time because of the expense. Finding iron knees or ballast would be a distinctive clue because of their rarity, Ryan said.

Finding cannon would offer more definitive clues to the ship’s true identity because cannon typically carry markings from the foundry that made and sold them. Also, Jones’ personal belongings went down with the ship, which, if found, would help identify the wreck and add to what is known about Jones.

“The ship’s bell is the holy grail because it would have Duc de Duras, the ship’s original name,” Ryan said.

As for Blackburn’s find, Ryan isn’t ready to believe his wreck is Bonhomme Richard without more proof. But she thinks his wreck has the potential to be a significant find for historians.

“I think he found an incredible wreck,” Ryan said. “It’s an old wreck and it will tell us something. It’s going to be very interesting.”