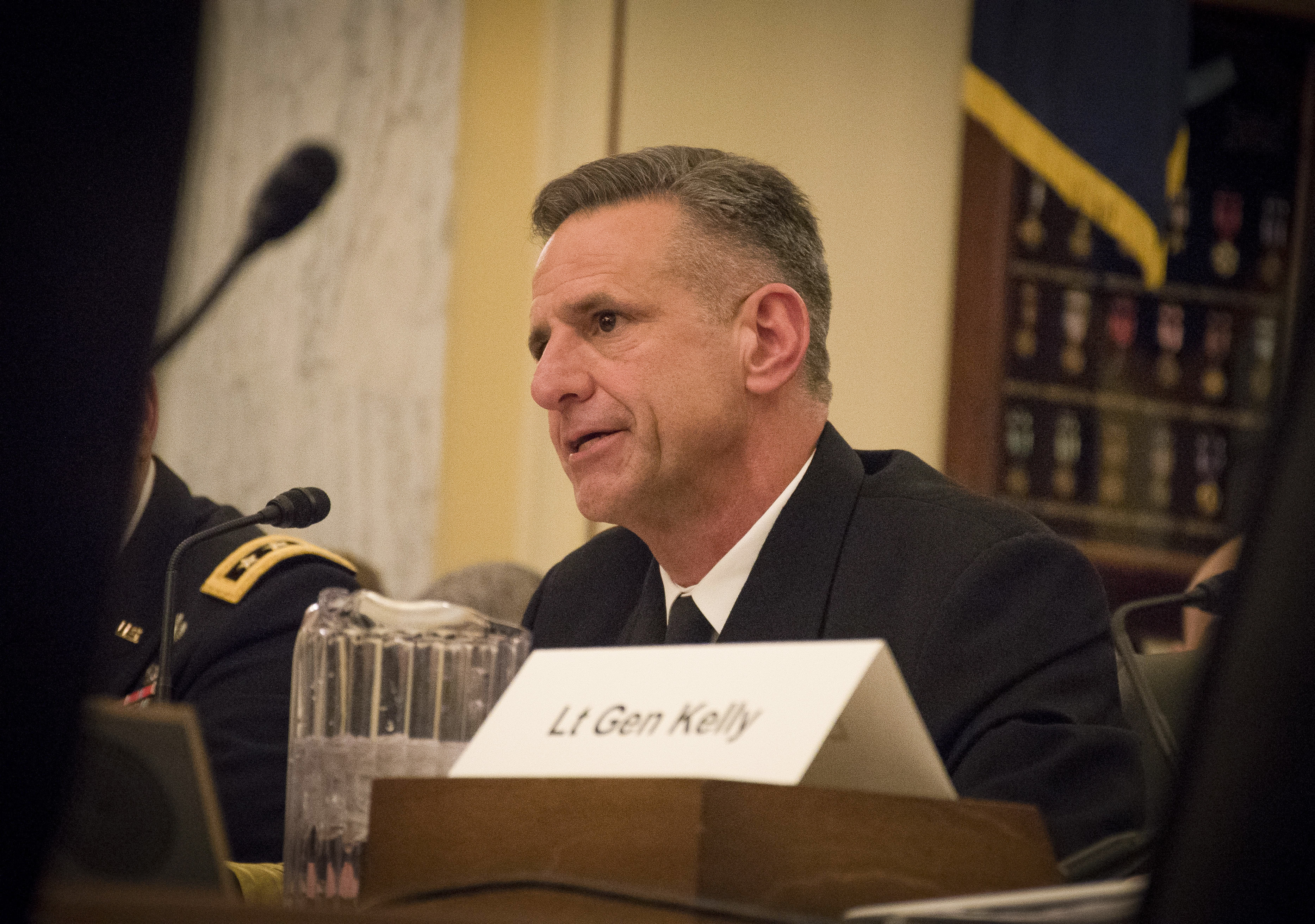 Chief of Naval Personnel Vice Adm. Robert P. Burke testifies with his service counterparts about Military Personnel Policies and Military Family Readiness during a hearing before the Senate Armed Services Subcommittee on Personnel on Feb 27, 2019. US Navy Photo

The chairman of a Senate panel overseeing military personnel pushed the Navy and Marines to fix ongoing military housing problems that include black mold and sewage backing up into base housing.

“This is not a witch hunt,” but “we know housing providers made a mistake” in maintaining these properties, Sen. Thom Tillis (R-N.C.) said at a Senate Armed Services personnel subcommittee hearing on Feb. 27. He said there “were no consistent measurements” of what the housing providers were expected to do to maintain the buildings once the housing was built, and he cited differences in contract wording in more than 80 public-private arrangements with the government as part of the problem.

Tillis charged the services’ personnel chiefs and senior non-commissioned officers who testified to ensure such conditions do not occur again.

When asked by Tillis why the housing conditions were allowed to deteriorate without the Navy or Congress knowing, Master Chief Petty Officer of the Navy Russell Smith said “we’re looking for them to call” or “attend a town meeting,” but sailors often don’t use those avenues to speak out. They are more likely to communicate through cell phone apps to express their feelings. “We need to … make ourselves more available” through social media to have a better understanding of fleet concerns, Smith said.

Smith and Chief of Naval Personnel Vice Adm. Robert Burke pledged “we will make 100-percent contact” with all sailors and their families about housing, and when invited in base officials will review the house with the occupants to identify areas of concerns.

The other services’ personnel chiefs and senior NCOs made similar statements to the panel.

The widespread problems in privatized base housing first surfaced on Capitol Hill at a Feb. 12 House Appropriations Committee hearing, and interest grew the following day when the Senate Armed Services Committee devoted a session to the topic. In a break from usual format at the Senate hearing, family members provided the first round of testimony rather than government officials or spokesmen for the housing developers.

Burke said “we view [housing conditions] as an urgent operational issue” that needs immediate attention. In addition to the personal contacts with sailors, he said the Navy is reviewing all the partnerships agreement to ensure accountability. 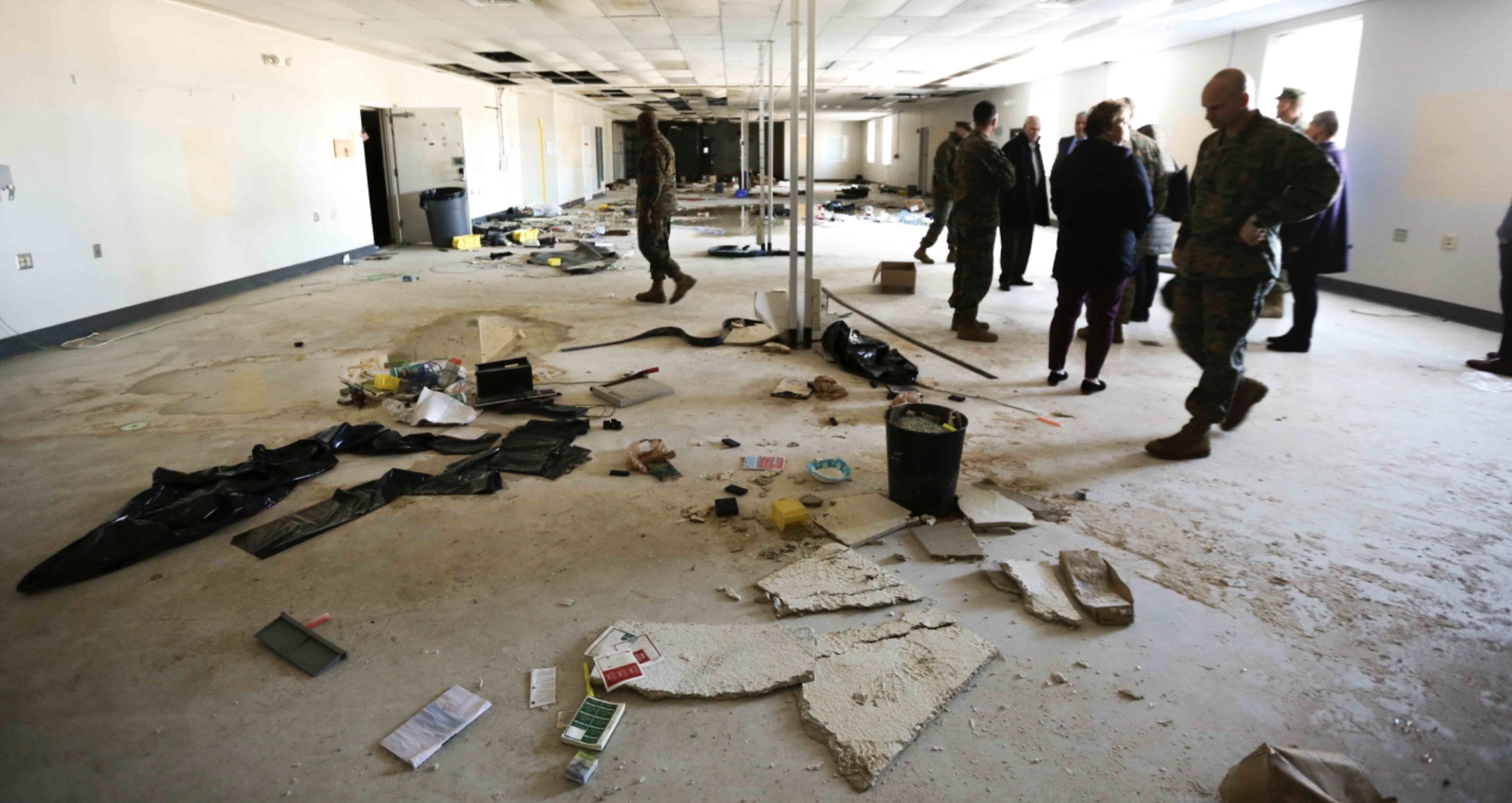 Secretary of the Navy Richard V. Spencer and Commandant of the Marine Corps Gen. Robert B. Neller walk through buildings with other base leadership during a visit to Jacksonville, N.C., Jan. 22, 2019. US Marine Corps Photo

Lt. Gen. Michael Rocco, Marine deputy commandant for manpower and reserve affairs, said “this is commander’s business” and requires that kind of attention to discover the problems, fix them, and ensure there is no retaliation for lodging these complaints and concerns to the command.

Rocco put the price tag for that work at $3.5 billion.

The devastation from the September storm has left buildings, from hangars to dental clinics, uninhabitable.

“Camp Lejeune is our major operating base on the East Coast,” Rocco said. “Those Marine deploy worldwide,” so these facilities need to be repaired or rebuilt as quickly as possible to keep them and their equipment at proper levels of readiness.

On recruiting and retention, Burke and Rocco said “the war for talent is real” but that both the Navy and Marine Corps met their goals for the year.

The Marines “are exceeding all quality goals” in recruiting, Rocco added. He noted the recruiting of women has been progressing well. Women makeup 8.6 percent of the Marine Corps and are in “all previously restricted occupational fields.” Five years ago, women were 7.3 percent of the corps and were barred from direct combat occupations.

He told the committee that there has been a “rise in unrestricted reporting” of sexual assaults, which he attributed to Marines feeling safer to report these incidents.