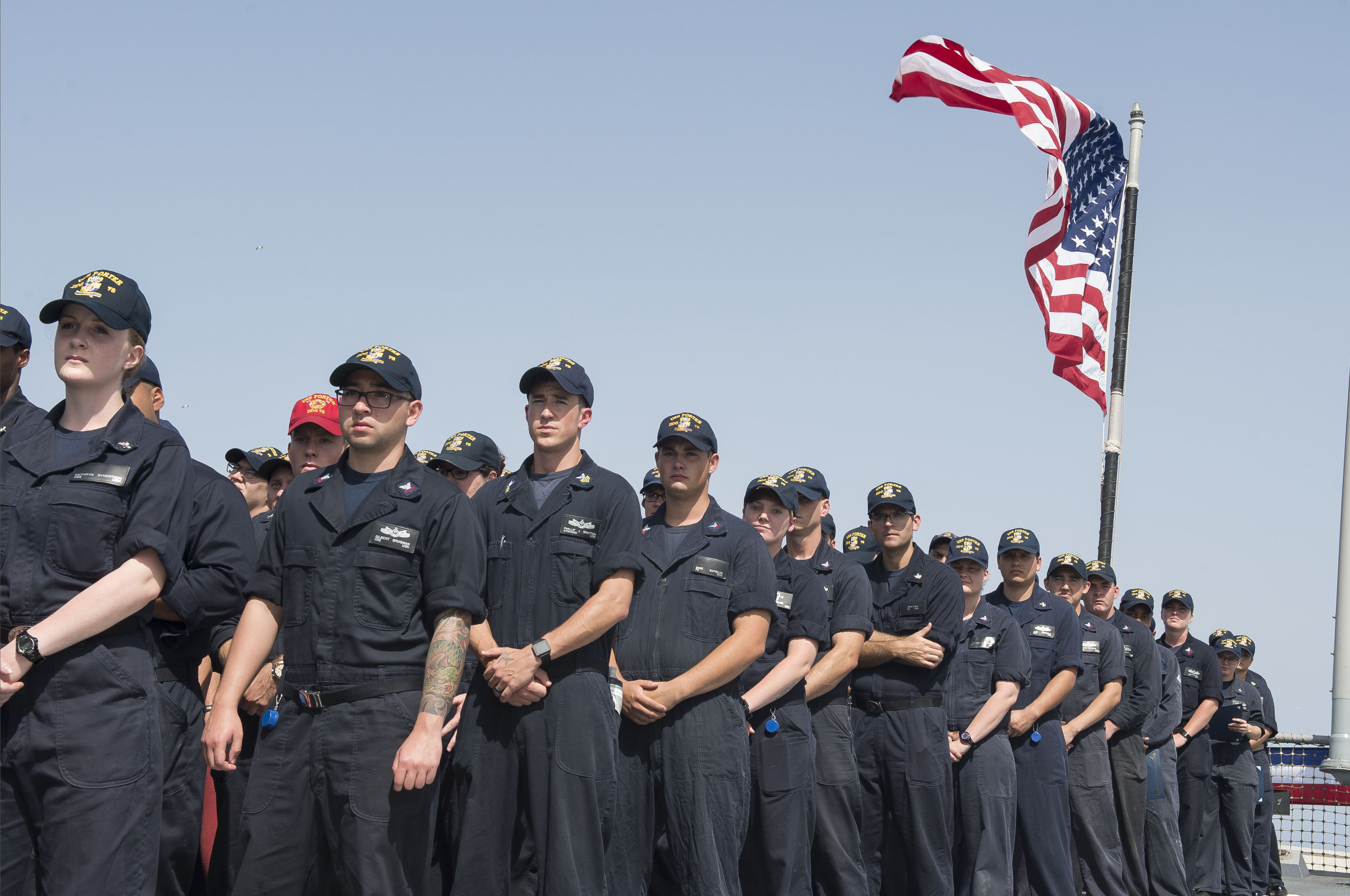 CAPITOL HILL – The Navy is short about 6,200 sailors to meet its at-sea requirements for its current force, and that gap could grow as the service adds new ships to the fleet, the head of U.S. Fleet Forces Command told a House panel on Tuesday.

Those sailors will, in part, be used to plus-up crew numbers on each surface ship after the Navy had previously gone to a lower “optimal manning” crew size to save personnel costs, Adm. Chris Grady told a combined hearing before the House Armed Services readiness and seapower and projection forces subcommittees.

“As we sailed through that environment, we recognized that that was too few, and indeed since 2012 the number on a DDG was 240; in 2017 it’s about 270 and will be funded back up very close to the original size of a guided-missile destroyer in 2023 at about 318,” he said.
“Personnel is expensive, and that number did not work out well, and we’re now buying back to a larger size crew complement for a destroyer.”

According to the written testimony from Grady and U.S. Pacific Fleet Commander Adm. John Aquilino submitted for the hearing, the missing sailors are from the mid-grade and senior enlisted ranks that will take years to train and place in the fleet. The pair indicated there wasn’t a specific set of billets they needed to fill with the new sailors but rather that they were needed across platforms at sea.

That number could grow as the Navy adds ships to the fleet and personnel needs rise, Grady said. Growing sailors fast enough to the level of technical ability to operate the proposed 355 ships is set to be a major challenge for the service and a key focus of the Navy’s ongoing surface reform effort.

Acute manning problems were found to be a factor in the fatal collisions of USS Fitzgerald (DDG-62) and USS John McCain (DDG-56). For example, Fitzgerald did not have lookouts on the bridge wing immediately before the crash, and sailors aboard McCain weren’t qualified to use the helm controls which contributed to its collision.

In the short term, Aquilino said all surface ships in the Pacific are staffed to meet the minimum qualifications outlined in the surface reforms.

“All the forces on the Pacific side deployed meet the standard of 95 percent fill and 92 percent fit, which is the right job with the right person with right skills,” he told the panel. “That was one of the changes that we absolutely pulled up to the highest level to make sure that no one is out there well below a certain level and somebody didn’t know.”

Grady and Aquilino told the panel that fixing the surface forces after almost 20 years of neglect would take years of sustained effort and funds that would extend past the boost in spending of the last two defense budgets.

“We had a sizeable plus-up; you are saying those current sustained level needs to continue for years and years to do the job properly?” asked Rep. Doug Lamborn (R-Col.).
“Absolutely,” replied Aquilino.

While the pair highlighted the wins from the Navy’s reform efforts of the surface force, some members expressed frustration with how the service has kept the fixes to a list of 108 items found in the two reviews conducted in the weeks after the fatal collisions and not looked at broader changes.

“My fear is that the Navy will measure their progress against the comprehensive review and the strategic ready review checklist and will miss the fundamental overhaul necessary to right a sinking ship,” Rep. Rob Wittman (R-Va.) said during his opening statement.
“It’s apparent that senior leadership failed to put adequate systems in place to prevent these collisions. It’s apparent that senior leadership’s acceptance of unnecessary risk to meet [combatant commander] demands led to the deaths of 17 of our nation’s finest.”

Rep. Elaine Luria (D-Va.), a former guided-missile cruiser executive officer now in her first term in Congress, said the two reviews added to similar studies that issued similar warnings over the last decade, including the so-called Balisle Report that warned of a systemic surface ship readiness shortfall almost a decade ago.

“We continue to be incapable of properly manning, training and equipping our surface forces, in my mind, to perform the most basic functions of seamanship and navigation, and for two decades we prioritized efficiency over effectiveness as is clearly delineated in the Balisle Report,” Luria said.
“We face yet again another damning report that we prioritize breadth over depth of experience.”