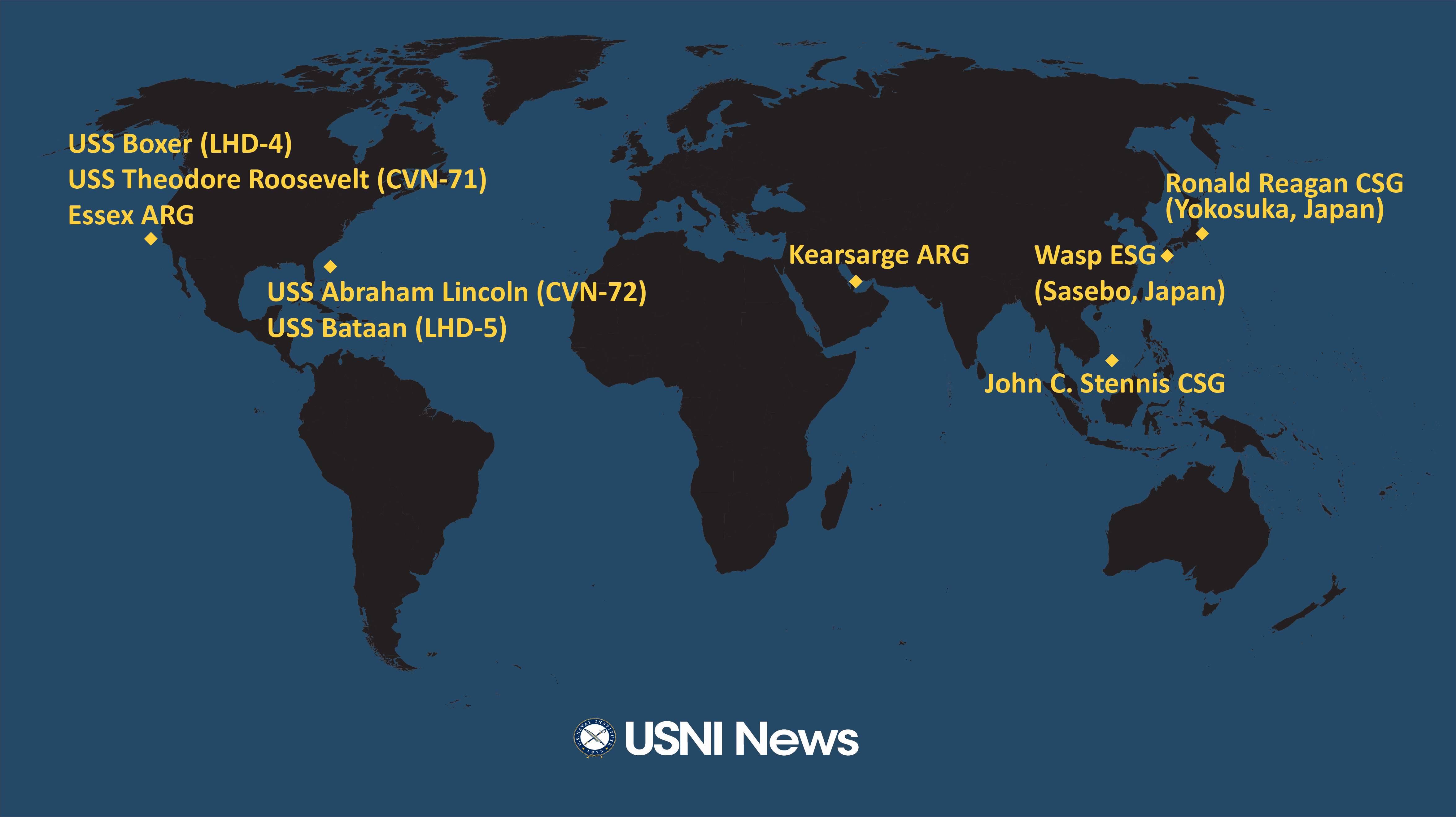 These are the approximate positions of the U.S. Navy’s deployed carrier strike groups and amphibious ready groups throughout the world as of Feb. 25, 2019, based on Navy and public data. In cases where a CSG or ARG is conducting disaggregated operations, the chart reflects the location of the capital ship. 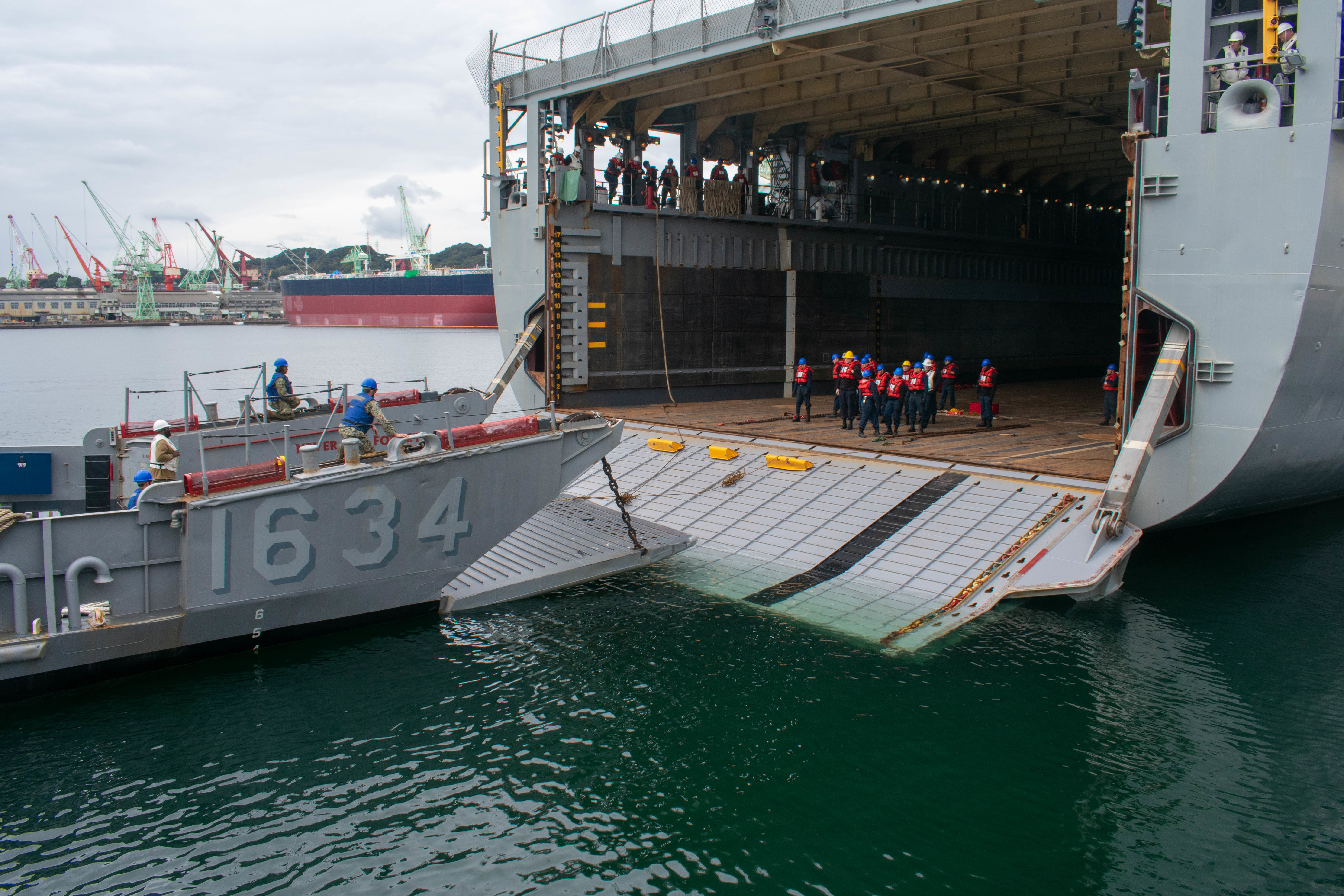 USS Wasp (LHD-1) recently returned to its homeport in Sasebo, Japan, after a Western Pacific patrol.

Later this year, Wasp will relocate to Norfolk, Va., and USS America (LHA-6) will serve as the new flagship of the Forward Deployed Naval Forces Japan (FDNF-J) amphibious fleet. 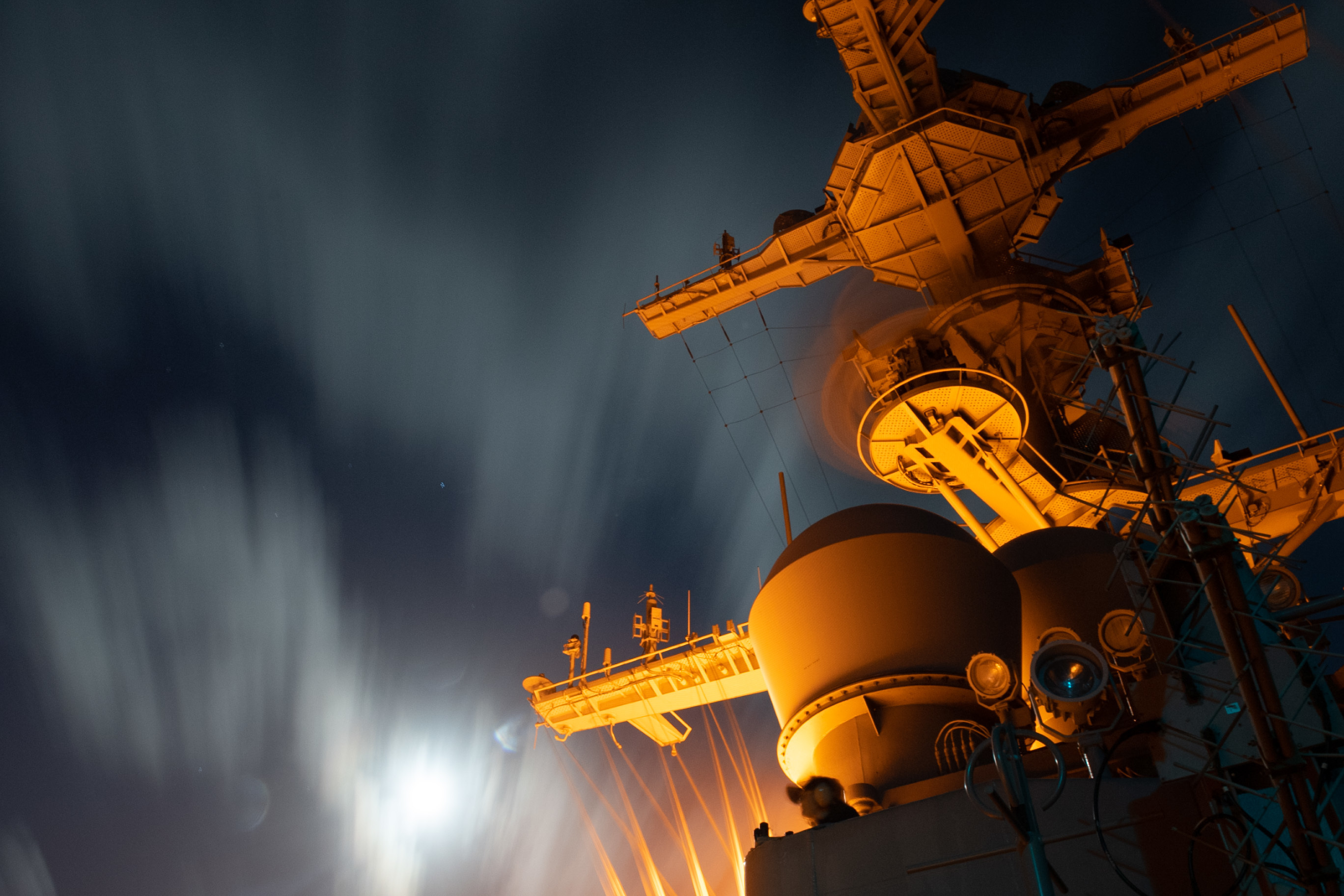 The John C. Stennis CSG is underway in the South China Sea after participating in the Cobra Gold exercise in Thailand. The CSG is presently operating off of the coast of Vietnam as President Trump and North Korean leader, Kim Jong Un, are scheduled to meet in Hanoi on Wednesday and Thursday. 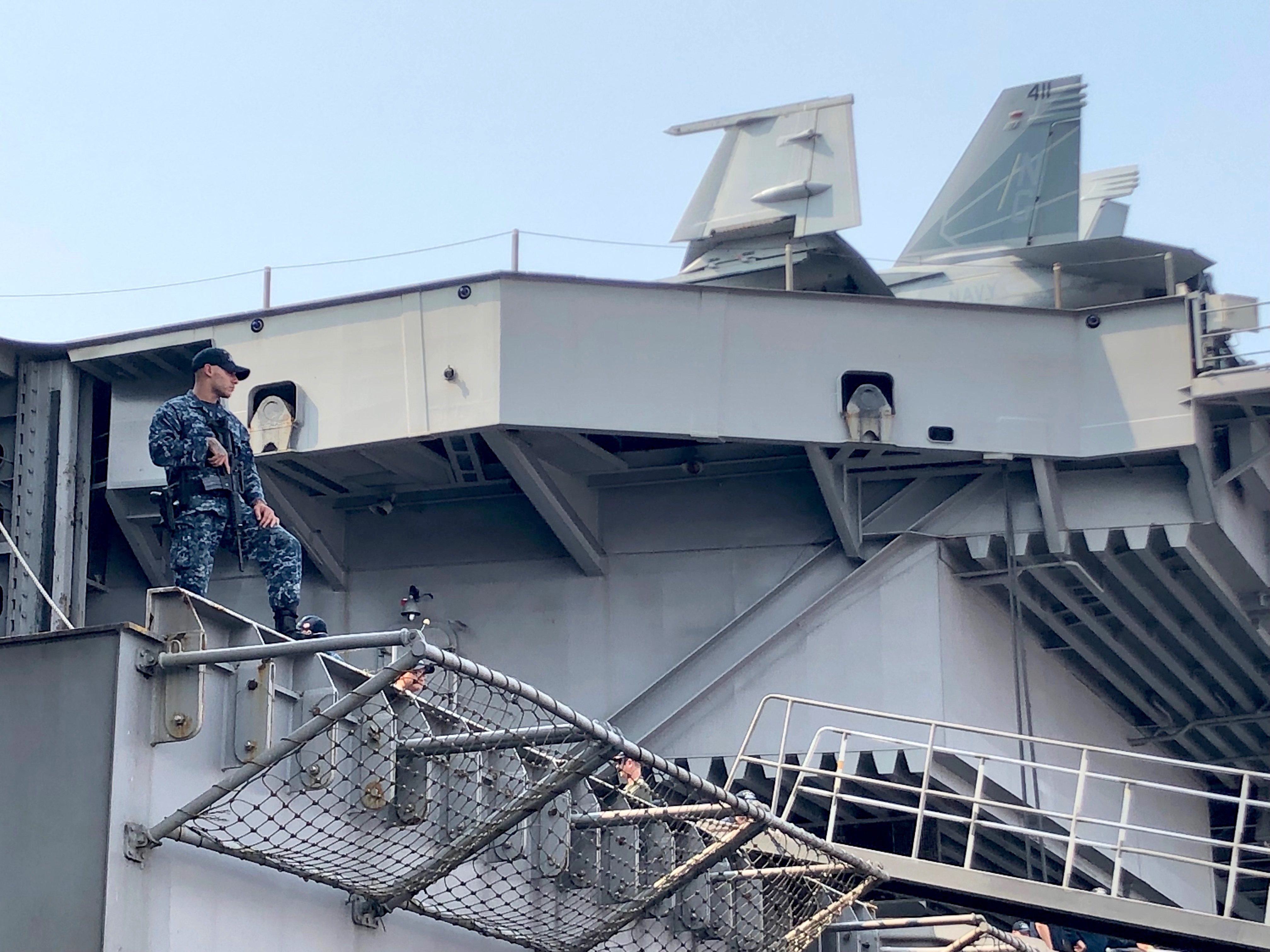 A sailor aboard the USS John C. Stennis (CVN-74) stands guard as his shipmates prepare to disembark at Laem Chabang Port, Thailand on Feb. 10, 2019. US Army Photo 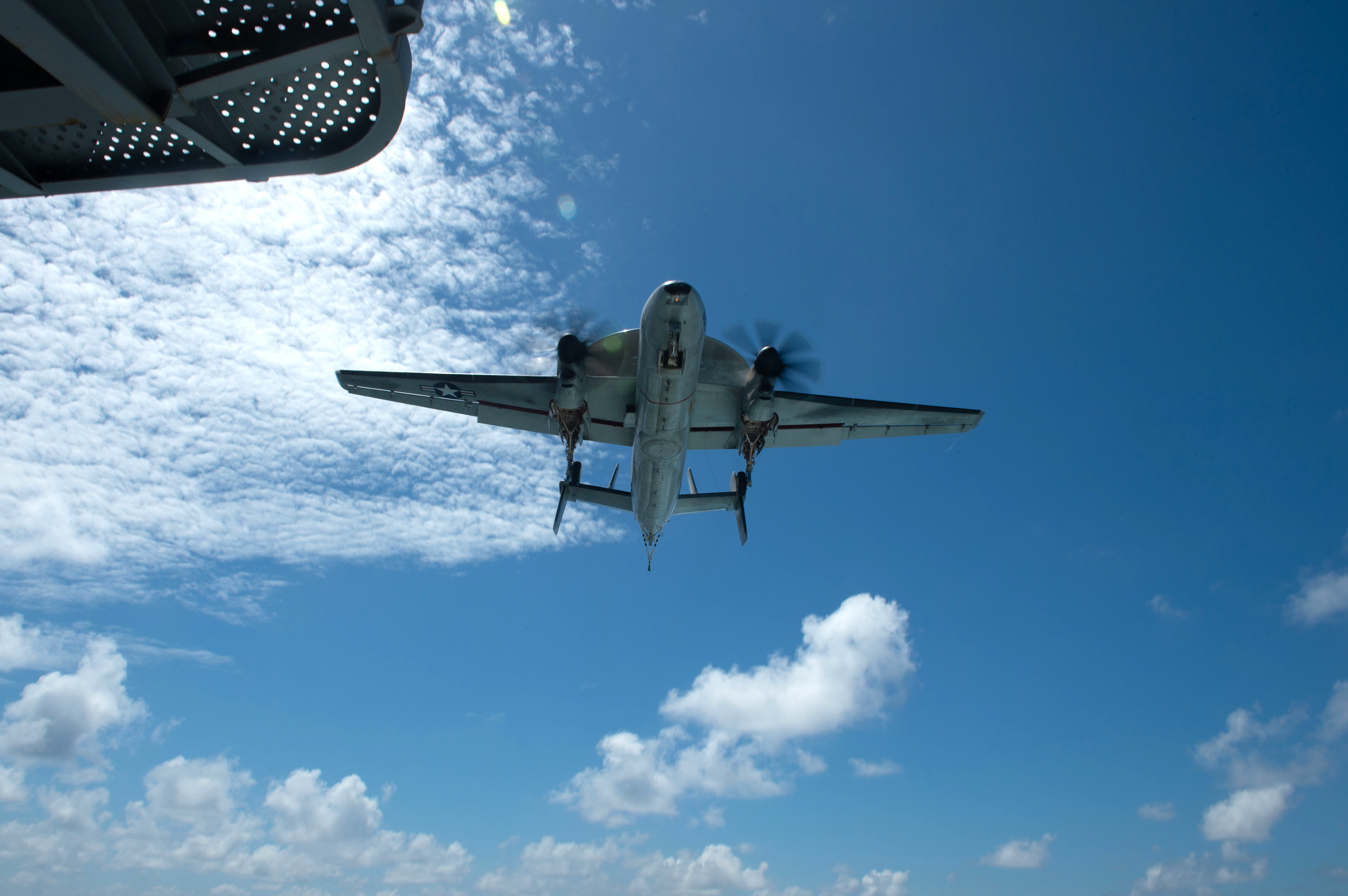 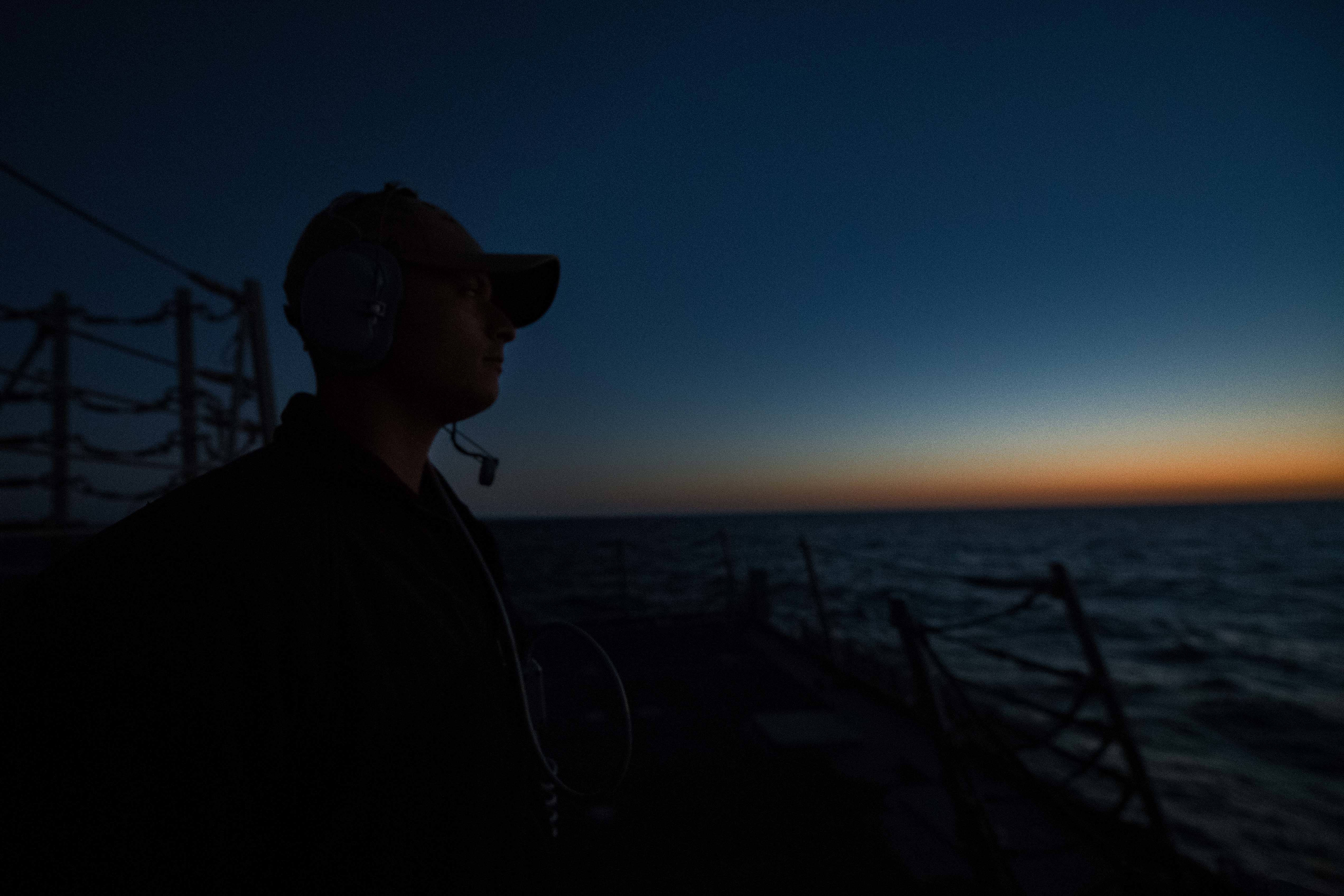 Seaman Pedro Sanchez, from Sacramento, Calif., stands watch as the aft lookout aboard the guided-missile destroyer USS Stockdale (DDG-106) in the Arabian Sea on Feb. 8, 2019. US Navy Photo 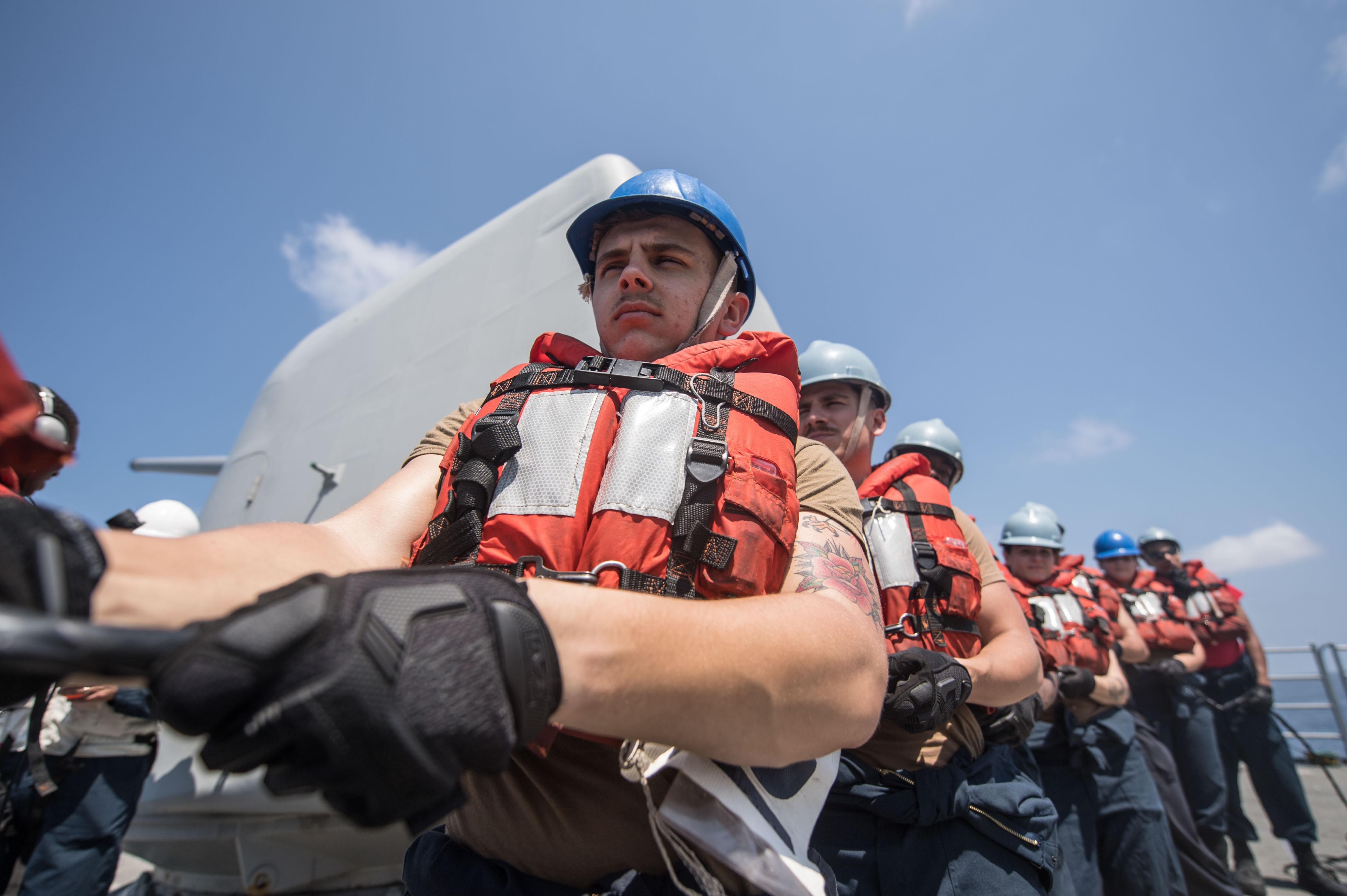 Operations Specialist 2nd Class Robert Gouthro, from Tracey, California, handles the phone and distance line on the fo’c’sle of the guided-missile cruiser USS Mobile Bay (CG-53) during a replenishment-at-sea with the fleet replenishment oiler USNS Guadalupe (T-AO-200) in the Pacific Ocean on Feb. 9, 2019. US Navy Photo 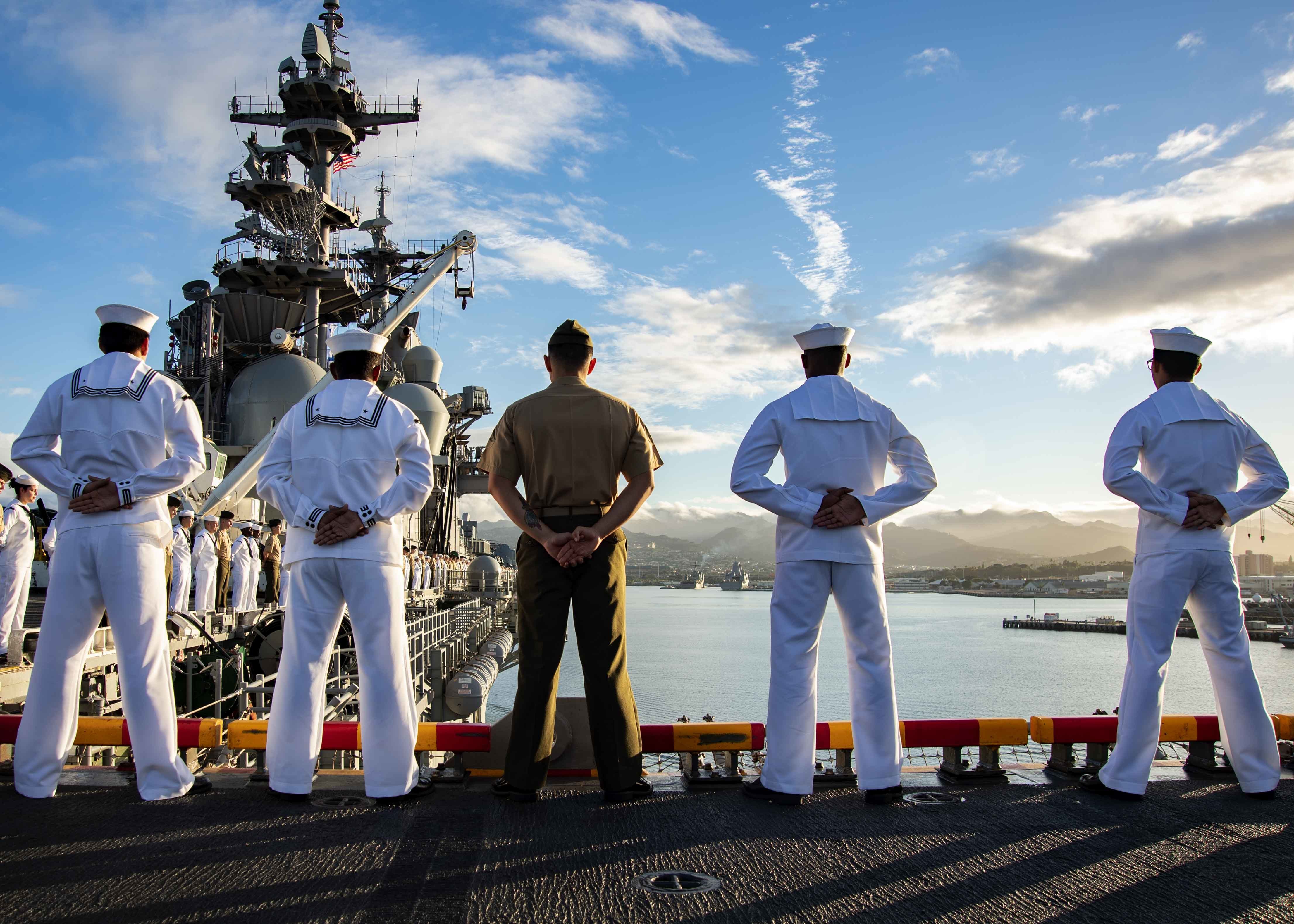 Sailors and Marines man the rails of Wasp-class amphibious assault ship USS Essex (LHD-2) as it pulls into Pearl Harbor on Feb. 18, 2019. US Navy Photo 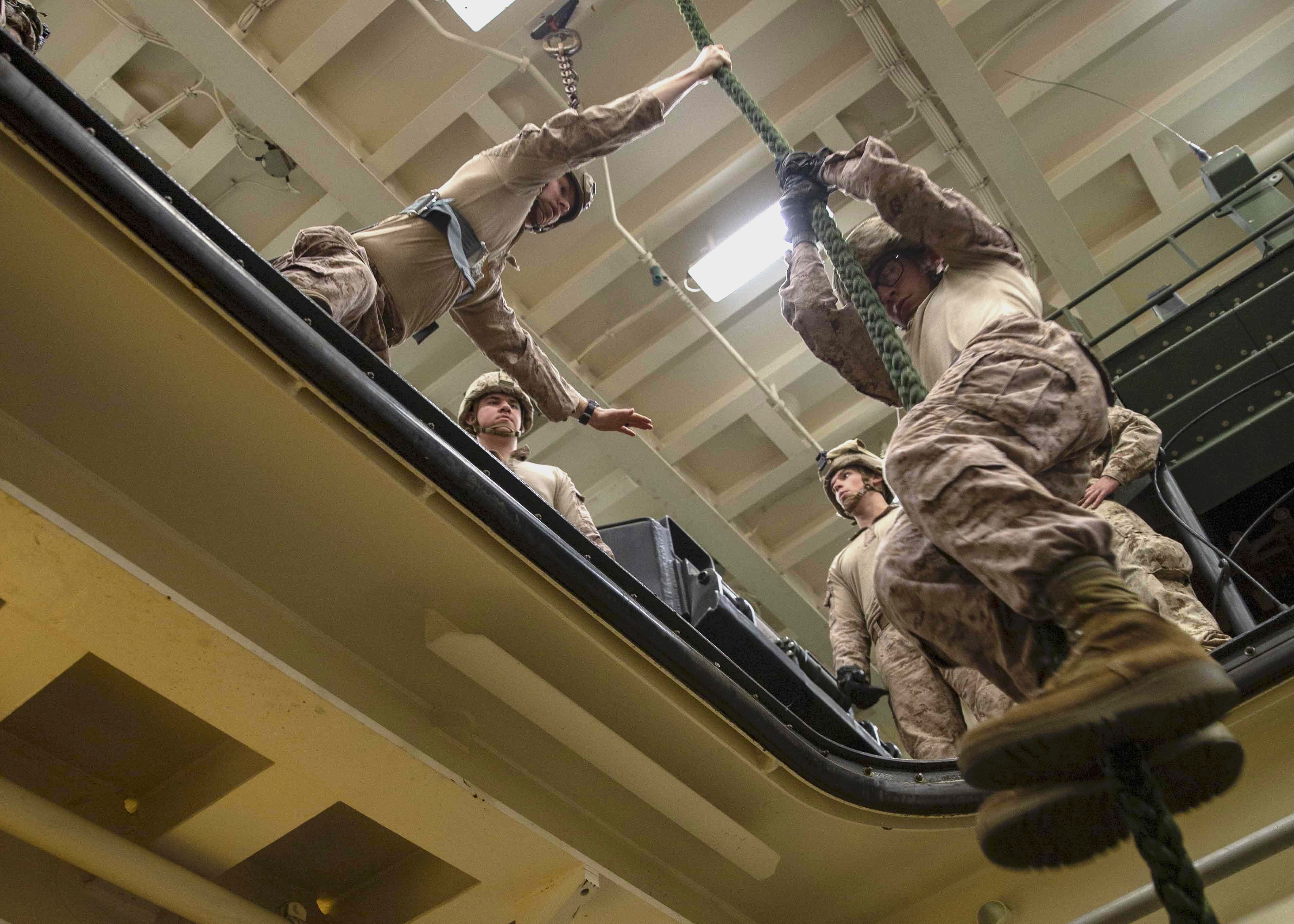 USS Kearsarge (LHD-3) and elements of the 22nd MEU are in operating in the central Persian Gulf after a port call in Bahrain last week. 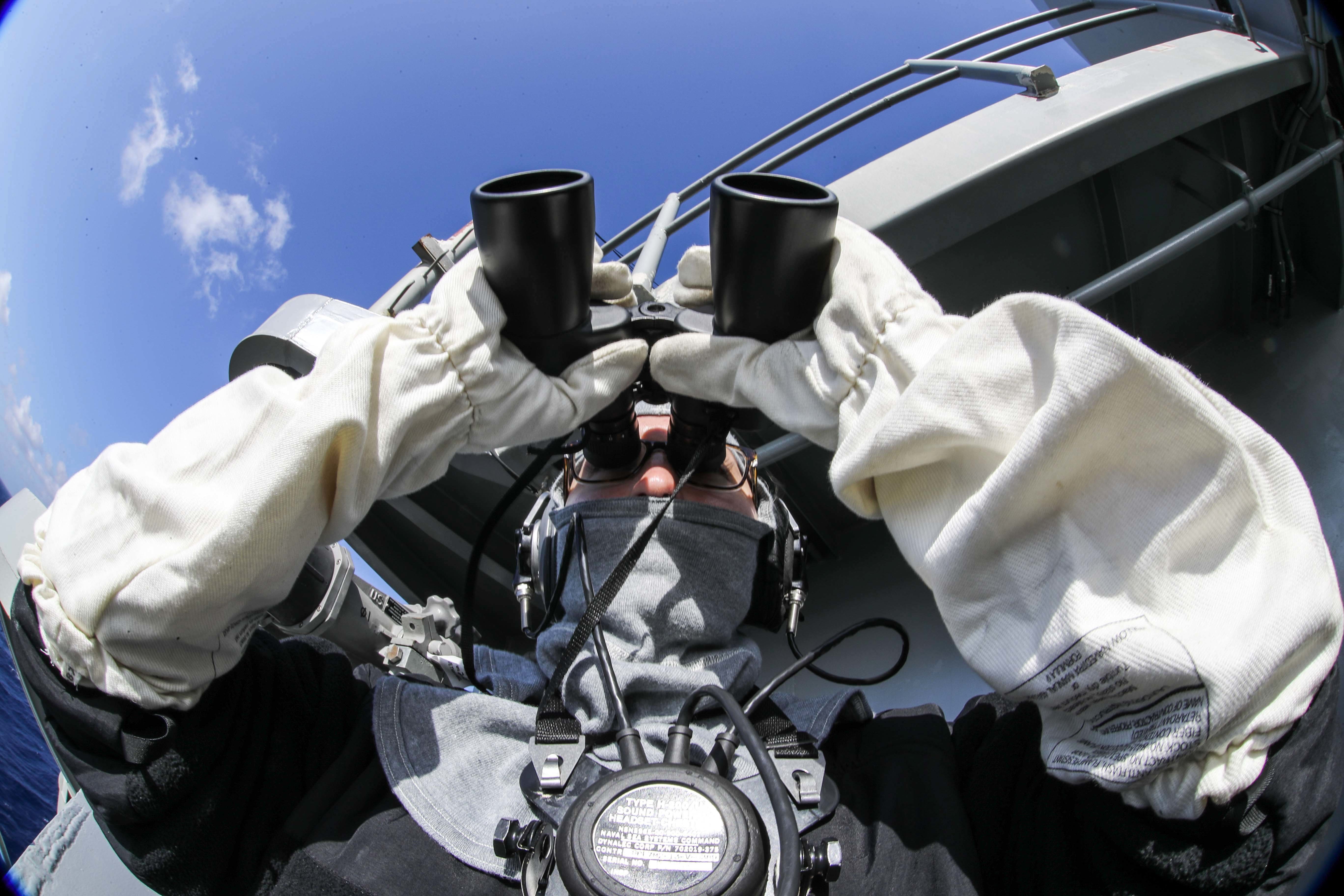 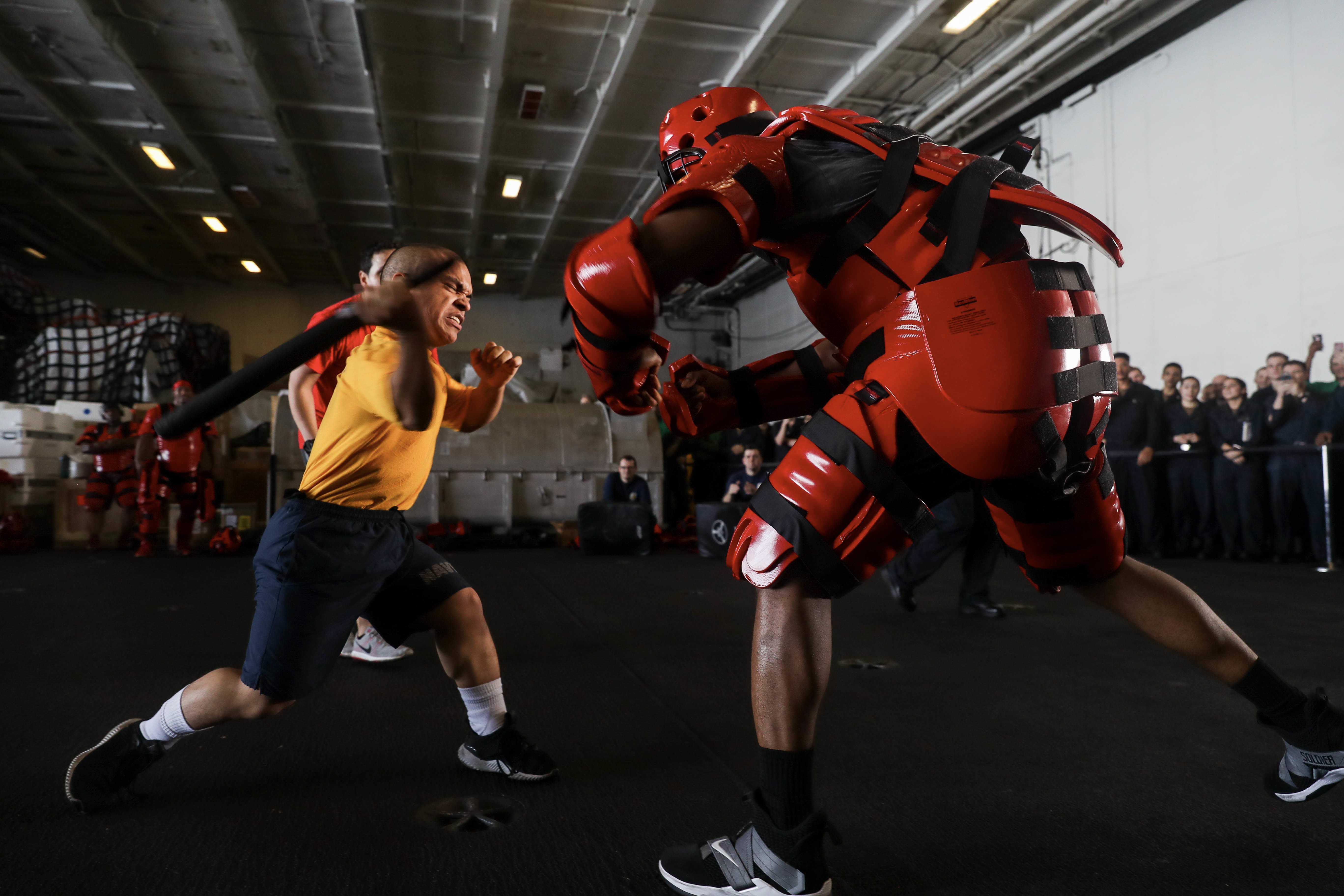