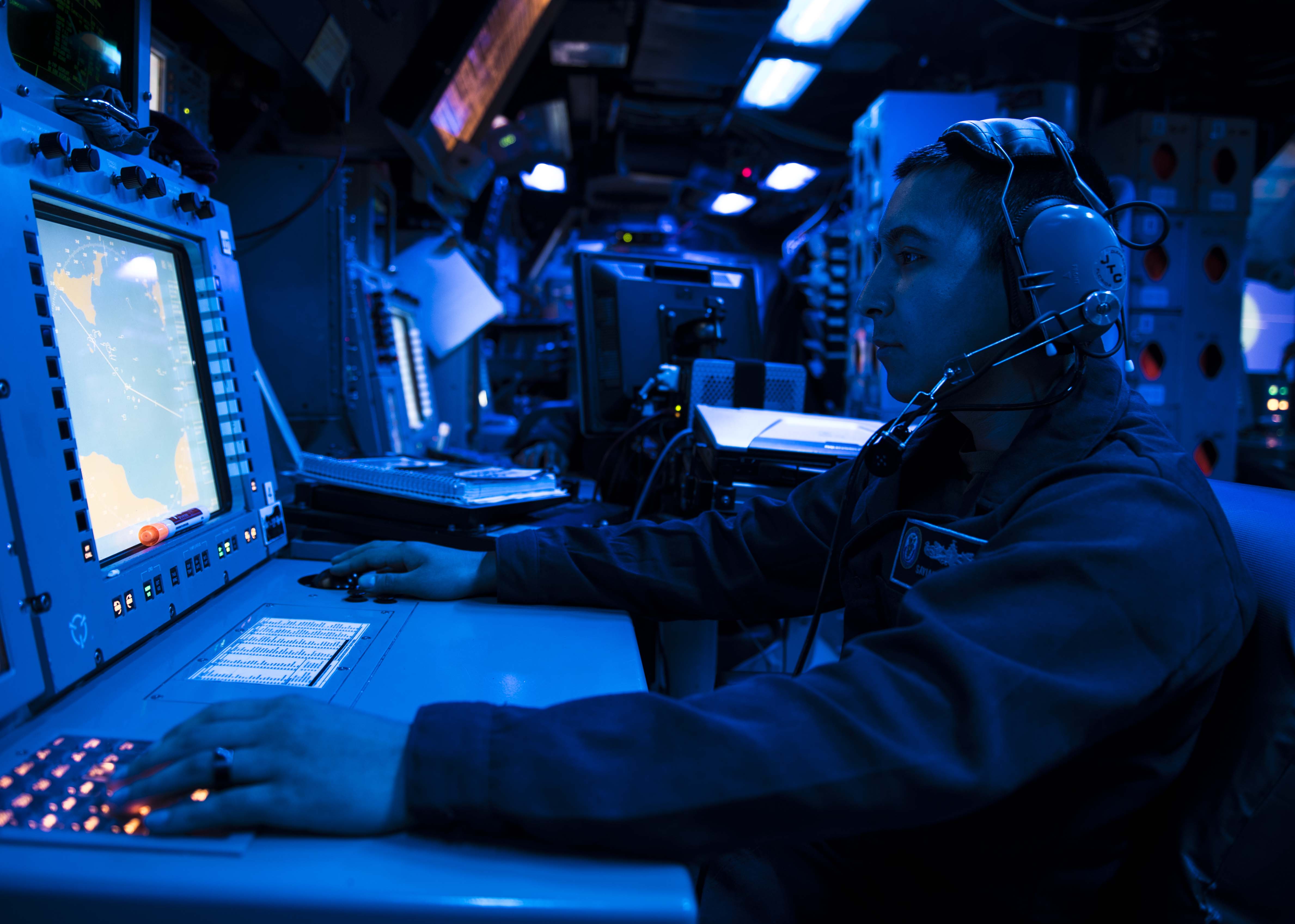 Fire Controlman (Aegis) 2nd Class Savian Wadsworthy stands watch as the radar systems controller in the combat information center aboard the Arleigh Burke-class guided-missile destroyer USS Porter (DDG 78) in the Mediterranean Sea, Dec. 30, 2018. Porter, forward-deployed to Rota, Spain, is on its sixth patrol in the U.S. 6th Fleet area of operations in support of U.S national security interests in Europe and Africa. US Navy photo.

SAN DIEGO, Calif. – Artificial intelligence could be used not only for faster decision-making on the battlefield but also for faster training as the Navy inserts more weapons and tools onto ships and aircraft, the Navy’s top weapons buyer said last week.

James Geurts, the assistant secretary of the Navy for research, development and acquisition, told reporters that the Navy has many needs for AI tools, especially given the service’s reliance on large data sets such as surveillance video and radar and sonar pictures.

“We tend to focus a lot on decision aids and how to use it to aid in decision-making speed. We look at it a lot of times on how to make sense of lots of data, whether it’s video processing or sonar processing or something along those lines,” Geurts said while speaking to reporters after giving a speech at the WEST 2019 conference, co-hosted by the U.S. Naval Institute and AFCEA.
“I think an area we don’t talk enough about where I think there’s also very interesting opportunities is in training, and how do we speed up our training cycles. So if we get our acquisition cycle going very quickly, whether it’s … building ships faster or putting new capabilities on ships, eventually we will be limited in its effectiveness by how fast we can train the crew and make them proficient. And so some of the use of AI is almost a training aid … I think that’s a whole other area of very interesting possibilities for us to deal with this kind of ever-changing world.”

One early effort to create this kind of AI learning environment is through the use of the Aegis Virtual Twin effort, which allows computers and consoles with the Aegis Combat System to be brought onboard a ship at sea and tap into actual radar and information feeds on the ship without interfering with the crew’s ability to navigate and fight the ship. The consoles running Aegis with real-time data from the ship could be used to test out new software capabilities that the Navy hopes to field and wants to solicit user feedback first, or it could be used for realistic training aboard the ship. The Navy has said that adding artificial intelligence to this existing Aegis Virtual Twin setup would allow the system to understand each user and track his or her past performance, creating future scenarios based on proven weaknesses or areas that haven’t been tested previously rather than providing cookie-cutter training to all sailors. 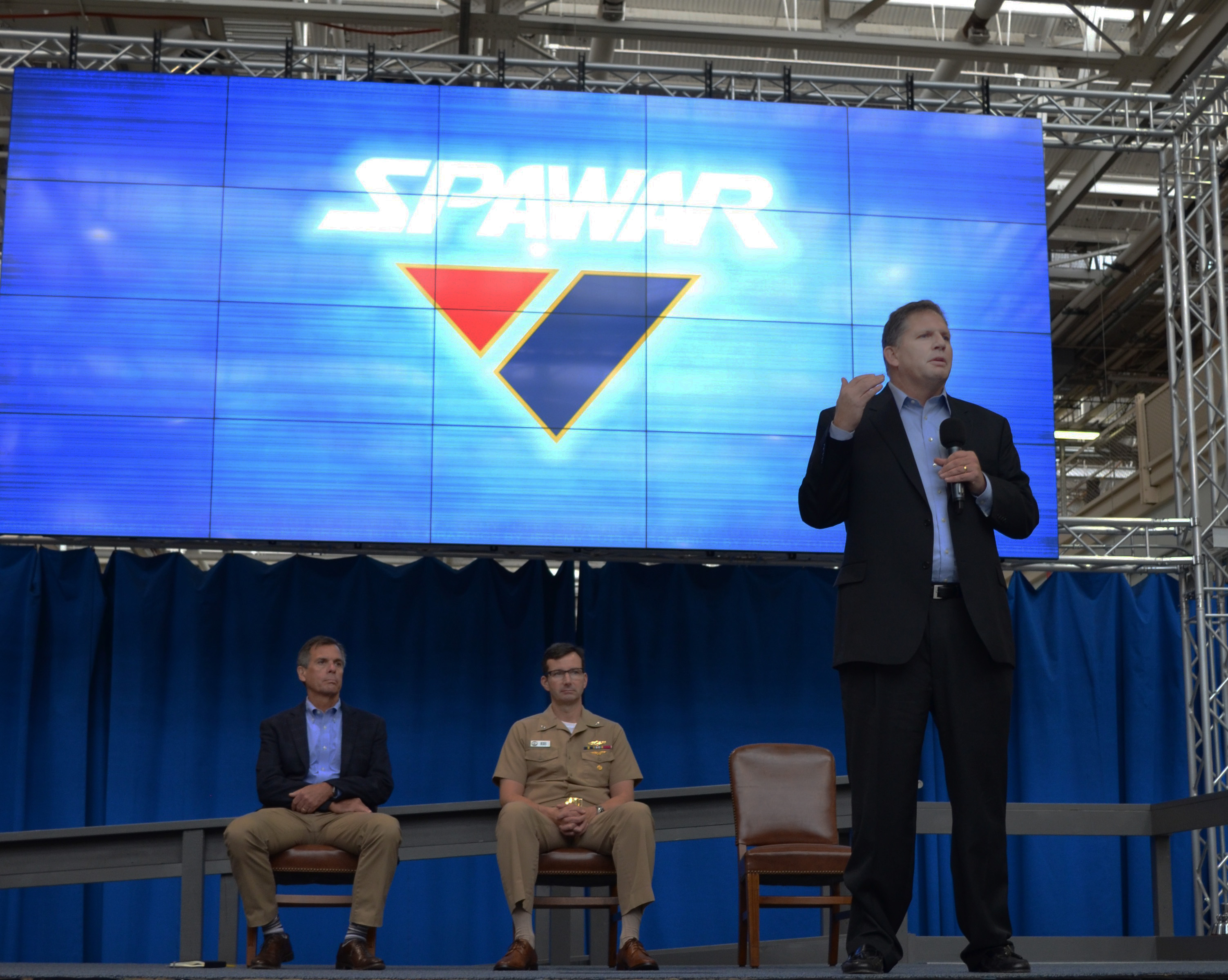 James Geurts, Assistant Secretary of the Navy for Research, Development and Acquisition (ASN (RD&A)), speaks with the Space and Naval Warfare Systems Command (SPAWAR) workforce in February 2018 to highlight his priorities and answer questions on issues impacting the information warfare environment. US Navy photo.

Leaders at the Department of Defense level are also eager to incorporate AI technologies. Speaking at WEST, Alan Shaffer, deputy under secretary of defense for acquisition and sustainment, said that the Navy needs to buy ships and planes, but if it can’t also field enablers then it won’t win a high-end fight.

“One of the biggest enablers is digital supremacy. Who can turn knowledge into decisions most quickly. So I say frequently … 100 years ago, wars were won by the folks with the biggest biceps. That’s not the future. The future is, who can get to the right decision most quickly. And what enables decisions? Turning a lot of data over to algorithms to crunch it to help give a decision – what most people call artificial intelligence. It’s not a panacea, it’s not perfect, it’s not everything, but the concept of turning data into the right decision more quickly – or more importantly, pointing out when something is going south – is incredibly important. So artificial intelligence … will help speed decisions,” Shaffer said in his keynote speech.

But the Navy can’t just incorporate new technology for the sake of modernizing; it needs to fully rethink how it conducts missions and how it buys new technologies, in the wake of this new digital warfare world.

“I’ll leave you with one quote that I find really appropriate when we talk about being able to go faster, being able to think about things differently, how we approach things, how we buy things, how we require things and how we get after the fight,” Becker said in a panel presentation.
“We can keep improving the way we’re doing business today, but if we need to do business completely differently in order to move at speed and scale, then we’ve got to figure out what that different is. … The quote I’ll leave you with comes from someone named (retired Vice Adm. David) Decoy Dunaway: ‘Don’t do stupid better.’”