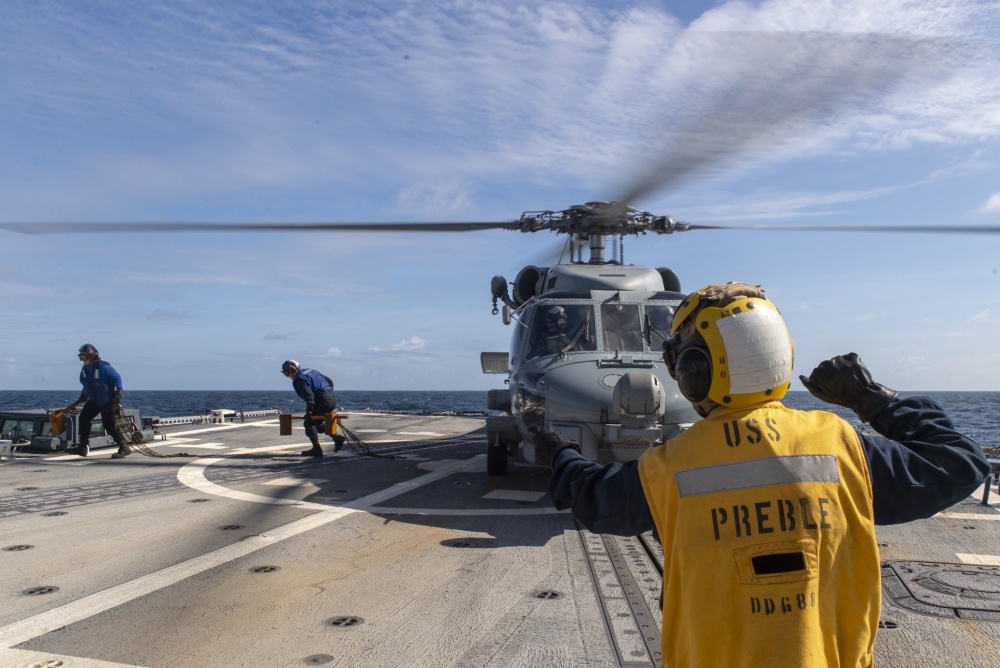 THE PENTAGON – Two U.S. guided-missile destroyers conducted a freedom of navigation operation (FONOP) past South China Sea land masses claimed by China but not recognized as islands by international law.

Monday, USS Spruance (DDG-111) and USS Preble (DDG-88) steamed within 12 nautical miles of Mischief Reef, which is an artificial island China has created to increase its territorial claims to the Spratly Islands chain, according to media reports. ABC News first reported the FONOP.

“U.S. Forces operate in the Indo-Pacific region on a daily basis, including in the South China Sea. All operations are designed in accordance with international law and demonstrate that the United States will fly, sail and operate wherever international law allows. That is true in the South China Sea as in other places around the globe,” Cmdr. Clay Doss, a U.S. 7th Fleet spokesman told USNI News. “We conduct routine and regular Freedom of Navigation Operations (FONOPS), as we have done in the past and will continue to in the future. FONOPs are not about any one country, nor are they about making political statements.”

Interactions with Chinese naval forces during the FONOP were described by a Defense official as routine and uneventful. This is the second FONOP the U.S. Navy conducted in the South China Sea this year. A month ago, USS McCampbell (DDG-85) steamed past the Paracel Islands.

China routinely complains such FONOPS are illegal intrusions into its territorial waters. The U.S. Navy considers such operations in the South China Sea and around the globe as a way to combat what is deemed to be excessive maritime claims that are not in keeping with the spirit or intent of international law.

The Spratly Islands chain includes more than 100 islands and land masses claimed by China, Malaysia, the Philippines, Taiwan and Vietnam, according to the CIA World Factbook. Mischief Reef is considered a low-tide elevation. Such features do not command a territorial sea under international maritime law.

Chinese government officials often issue a strongly worded statement issued in the days following a U.S. Navy FONOP. However, in October a Chinese People’s Liberation Army Navy (PLAN) Luyang-class destroyer nearly collided with USS Decatur (DDG-73) when it conducted a similar FONOP in the region. The Luyang-class destroyer conducted a series of aggressive moves, including at one point coming within 45-yards of Decatur, which the U.S. Navy called “an unsafe and unprofessional maneuver.”

Meanwhile, Chinese and U.S. Navy forces are among the 46 nations taking part in the five-day AMAN-19 exercise hosted by Pakistan, according to a statement issued by China’s Ministry of Defense. The exercise focuses on cooperation among navies to conduct maritime security, counter-terrorism, and disaster relief operations, according to the Pakistan Navy.