CAPITOL HILL – The amphibious warship community and supporters on Thursday pushed for continued momentum for shipbuilding, amid growing concerns that the upcoming Fiscal Year 2020 ship construction plan may not be as generous as the 2019 plan was.

Things are looking positive for amphibious force: the Navy decided to replace its aging Whidbey Island-class dock landing ships (LSD-41/49) with a Flight II variant of the much more capable San Antonio-class amphibious transport dock (LPD-17), which will be built on the same hot production line at Ingalls Shipbuilding as the first 13 Flight I ships. On the larger amphibious assault ships, there is increasing chatter in the Navy about accelerating the procurement of the next hull, LHA-9, to avoid any gaps in production and even to buy that ship as part of a two-ship buy, akin to the recent two-carrier buy that was lauded for its cost savings.

However, it’s unclear what the FY 2020 budget request and accompanying long-range shipbuilding plan will hold. Several sources told USNI News that this year’s plan pulls back on new shipbuilding compared to the 2019 plan and its $21.9 billion shipbuilding and conversion account request. Though it won’t be clear what this means for individual ship programs until the budget and the long-range shipbuilding plan are released – potentially as early as March 12 – Navy leadership has already started backing away from last year’s plan that outlined a path to a 355-ship fleet. Chief of Naval Operations Adm. John Richardson said Wednesday at the Atlantic Council that “our analysis – for now – is 355. We’re in the middle of reassessing that force structure, and we’ll see where that takes us. That study is due to complete later on this year.”

At a Thursday morning Amphibious Warship Industrial Base Coalition breakfast on Capitol Hill, Lt. Gen. David Berger, the deputy commandant of the Marine Corps for combat development and integration, said in a speech that “those of us in the Marine Corps side, we see, like the other services, we see everybody’s budget; and the Navy funding is challenged just like ours, and the Navy is going to have to make tough choices. Absolutely they’re going to. But if you’re going to have a fighting inventory of amphibious ships, these cannot be at the bottom of the pile in terms of prioritization. And they’re not, and we need to constantly push them towards the top.”

Berger added that the FY 2019 shipbuilding plan was “probably the most favorable we’ve had in probably 20, 25, 30 years” but that that support for amphibious shipbuilding needed to be maintained in the coming years, not reversed.

“Maintaining the momentum, though, it was mentioned earlier, means accelerating buys and looking at two-ship buys. Some selected service life extensions. But specifically, like the LHA-9 procurement and the (LPD) Flight II procurement cannot be pushed out into the future. There’s an industrial capacity portion of that, but frankly, selfishly, there’s a warfighting part that says we can’t take a hiatus for two or three years. We cannot do that. It’s too important.”

The Navy’s shipbuilding plan has long had LHA-9 slated for FY 2024, despite the future Bougainville (LHA-8) being a FY 2017 ship. That long gap between ships would disrupt the production line at Ingalls Shipbuilding and have potential effects on cost, schedule and quality of LHA-9. The AWIBC this morning called for LHA-9 to be moved from 2024 to 2021 to keep the hot production line churning.

Berger noted during his speech that continued support for new construction wasn’t the only thing the amphibious fleet needed: it needs support for modernization and repairs, and support for introduction of new capabilities.

On new capabilities, Berger referenced the Amphibious Warship Evolution Plan that would bring increased lethality and connectivity to amphibs. Berger said the ships needed Vertical Launch System cells or other weapons “all integrated into an organic air defense capability, because we’re going to be threatened from the air,” as well as improved communications but lower signatures emissions because “they’re going to try to find us, and if they can find us they can target us.”

Berger also talked about using amphibs as a mother ship for unmanned platforms in the air, surface and subsurface. He said the Marines don’t have that capability today, but all the technology pieces exist and could be netted together to allow amphibious ships and Marines to use unmanned systems for surveillance and strike missions, among others.

Lastly, he told USNI News during a question and answer session that the Navy and Marines needed to invest in two areas to support amphibious ships: a family of connectors to move Marines around the littoral battlespace, and mine countermeasures tools to allow Marines to move there safely.

“If you’re going to move a distributed force in the littorals, you’re moving back and forth between land to land, land to ship, ship to land. And [the connectors] need to be different sizes, different capabilities. It isn’t one or two – [the expeditionary warfare directorate] is working on a family, and we’re going to need that,” Berger said of the next generation of connectors.

In that littoral space, he continued, “one of the major threats is from mines. I wouldn’t say we fell asleep at that, but we haven’t been challenged at that for a while. We are assuming we will be. So we have to have a counter-mine capability” that is fully resourced to keep the Marines safe. 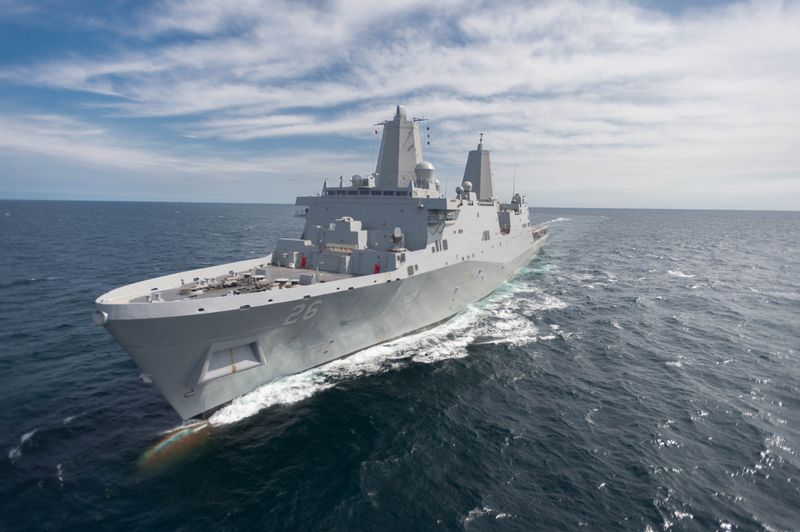 Despite the spending needs in a year that experts predict will be tough for defense spending, one lawmaker was optimistic the amphibious community had a strong pitch to make for funding.

Rep. Mike Gallagher (R-Wis.), a former Marine officer himself, told the military and industry leaders at the event that “we can’t just hammer the need for the statutory requirement for amphibs, more amphibs this, more amphibs that – we have to get creative in terms of the story we tell about using the amphibious fleet to the American people, otherwise we will be in a very difficult environment here in Congress to give you the amphibs you need. For example, the Mk 6 patrol boat is deployable from the well decks of our amphibious fleet. They’re small, they’re highly maneuverable vessels, they are an enormous asset – especially if current efforts to equip them with long-range anti-ship missiles (LRASM) pay off, for example. So you can imagine using amphibs as a mother ship, you can imagine parking patrol boats armed with LRASMs in disputed or strategic areas where they provide near-constant presence. The point is, it’s going to be up to our nation’s amphibious force to deliver outside-the-box solutions like this.”