After pulling out of a competition to outfit the Navy’s small surface combatants with anti-ship missiles, Boeing is seeing a warmer embrace of its 40-year-old Harpoon missile from the U.S. Navy’s aviation and surface fleets and from foreign military sales.

The Harpoon missile, despite its age, is having a small renaissance, as some of the more than two-dozen countries that already own the missile look to upgrade to a new Block II and Block II Plus version, and additional countries look to add the weapon to their inventory. The 1970s-era weapon was heavily featured at the Rim of the Pacific 2018 exercise last summer, when six Harpoon were shot – including from a U.S. submarine for the first time in two decades, from a Royal Australian Air Force P-8 Poseidon aircraft and from a Republic of Singapore Navy frigate, among others.

Jim Bryan, director of Boeing Cruise Missile Systems, told USNI News last month at the Surface Navy Association annual national symposium that the very fact that so many global partners already use the missile is a key part of the pitch to pursue upgrades, which allows the missile to tap into the network that the U.S. and allies already use to share targeting data and other information.

Harpoon Block II includes a navigation system upgrade – moving from a legacy midcourse guidance system to a new GPS-aided inertial navigation system – that gives the missile a 7-times-better targeting capability than the legacy missile, he said. The “plus” in the Block II Plus adds in datalink connectivity to allow for in-flight targeting updates, which brings the missile to a 10-times-better capability compared to the older Block IC missiles, Bryan .

Boeing has been pushing a plan to upgrade the legacy Block IC missiles to the II Plus configuration, which delivers the new-build capability Boeing is selling internationally at a “fraction of the cost” of buying new missiles. 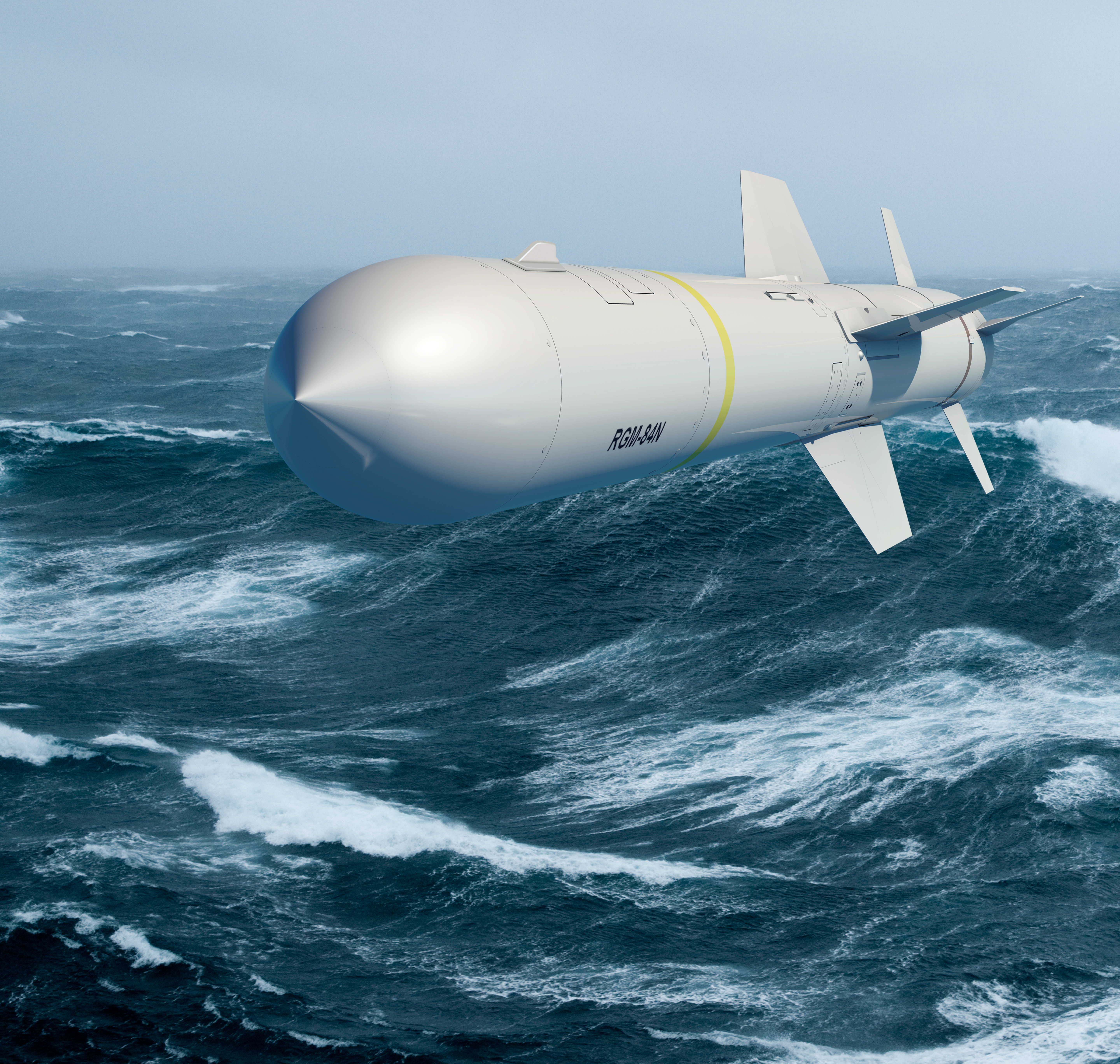 Some communities are sold on the upgraded capability, though the largest potential customer – the U.S. Navy’s surface fleet – has moved in a different direction.

Naval Air Systems Command last year put Boeing on contract to upgrade its inventory of Harpoon missiles, and just last week NAVAIR exercised a $16-million contract option with Boeing to cover the upgrades of the next 79 Harpoon Block IC missiles.

“NAVAIR, they love the network-enabled weapon, it’s in line with where the U.S. Navy as a whole is going as far as collaborative weapons and network-enabled platforms and weapons,” Bryan said, adding that it takes less than two years from the time NAVAIR awards the contract to when Boeing can redeliver the upgraded missiles, most of which is spent on long lead time materials.

The U.S. submarine community may be the next to jump onboard with the Block II Plus upgrade. At RIMPAC, USS Olympia (SSN-717) fired a Harpoon at the ex-USS Racine (LST-1191) in a sinking exercise, marking the first time a U.S. sub had fired a Harpoon in more than 20 years.

“The great thing about that shot, in my mind, was it was something that was planned, reintegrated and executed and shot, and that timeframe was measured in months, not years. And there’s just no chance you could get an (new) anti-ship missile integrated and launching on a ship in that period of time, and Harpoon’s ready to go do it,” Bryan said, adding that the submarine community has a deep inventory of old Harpoon missiles and, “even though they’ve been in storage for 20 years, they’re still ready to fire and just as lethal.”

Since that successful RIMPAC shot, the submarine force has been in talks about how to bring back that anti-ship capability.

“We’ve talked to them a lot, we’ve provided them some rough estimates of cost – but where they’re headed, I have to defer to them,” Bryan said. No agreements are signed yet, he said, but he expects some kind of decision by the Navy later this year.

The Navy’s surface force is where Harpoon has struggled to gain a foothold. The Navy wanted an anti-ship missile for its Littoral Combat Ships and follow-on frigate program, and Bryan said the service chose to pursue a non-network-enabled missile, which left company officials scratching their heads. Boeing pulled out of the competition in 2017, and Bryan’s predecessor, Troy Rutherford, told USNI News at the time that “this solicitation isn’t the right place for us to make entrée into the surface Navy because of how it undervalues our overall capability.” The Navy selected the Raytheon-Kongsberg Naval Strike Missile to fulfill the LCS role last year after Boeing and Lockheed Martin both dropped out of the competition.

Bryan told USNI News last month that the divergence between Boeing’s capability and the surface navy’s requirement was partly on the datalink issue and partly on what types of sensors the missile should use. He said most international navies are moving in the direction of not only the active sensor that Harpoon uses but also electro-optical and infrared sensors, which Boeing has spent research and development dollars in recent years to test on the Harpoon missile. Bryan said the seekers the company has tested are better in bad weather and difficult lighting conditions on the water.

He acknowledged that using active sensors like the Harpoon does alerts adversaries’ defensive systems, but “I think the sea-skimming capability of Harpoon is really underestimated as far as counter-detection goes. There’s a reason all of the other anti-ship missiles have followed suit with the sea-skimming capability because it really is the biggest discriminator in terms of being survivable.”

Winning the over-the-horizon missile contest would have put the Harpoon on 35 LCSs and likely 20 frigates.

Still, the surface navy too has a large inventory of old Block IC missiles, and as it looks to grow the surface fleet and upgrade to a new Future Surface Combatant family of hulls, Bryan said he hopes surface leaders will consider the Harpoon II Plus as an affordable option.

“We still think Harpoon is an extremely viable and cost-effective solution for them. For the Navy to get to a 355-ship fleet – I think they want to arm that fleet as well – they’ve got an inventory of Block ICs that can be upgraded, again, dirt cheap, relatively speaking, and those missiles are ready today. Timeline is quick, technology is mature, it’s the same thing we’re delivering internationally today. They’ve been modernized, it’s got new electronics, we continuously update for obsolescence, and if they wanted to, if the surface fleet is interested in joining the network-enabled path forward, it’s ready today,” he said. 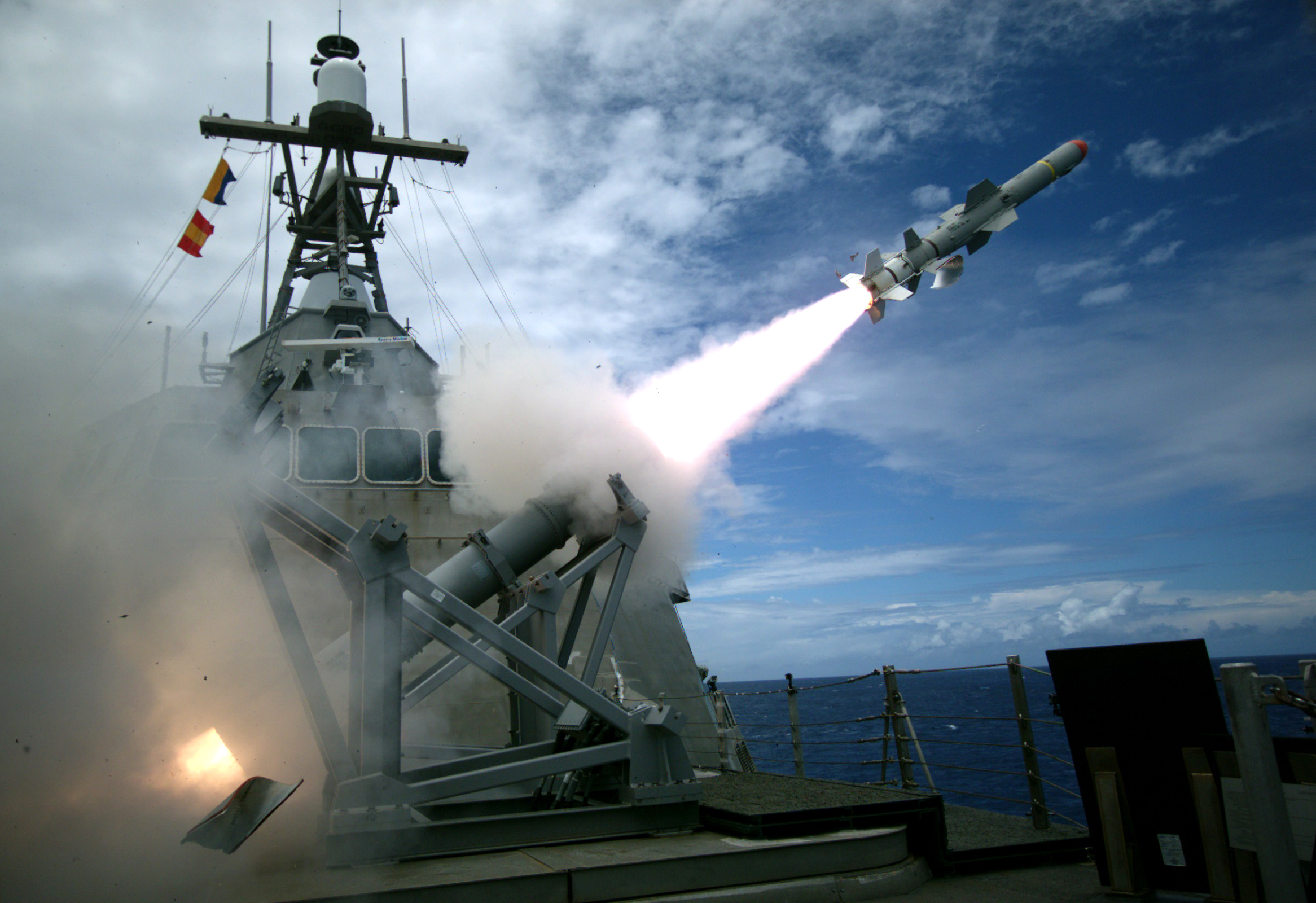 While the company waits to understand what future business it may have with the U.S. Navy’s submarine and surface communities, Bryan said business is booming internationally. Last year Boeing signed deals with Finland and Mexico, and “frankly, we have the largest backlog we’ve had in the history of the program; of the 40 years of Harpoon, we’ve got the largest backlog we’ve ever had,” he said, adding the company’s production line will be full through the mid- to late-2020s.

In addition to pitching the missile as a sub-, air- or ship-launched weapon, the idea of a Harpoon Coastal Defense System is picking up traction, with Finland already purchasing the missile for use in coastal batteries.

The U.S. Army and Marine Corps are looking at shore-based anti-ship missile capabilities – the Army and the Japanese army participated in the RIMPAC SINKEXs – and Boeing is in talks with both services about how Harpoon could fit into their shore-based sea control plans. Bryan said talks are farther along with the Marine Corps, which is focused on new concepts like Littoral Operations in a Contested Environment and Expeditionary Advance Base Operations, which both assume the Marine Corps will assist the Navy in gaining and maintaining sea control from its land-based camps on islands in the Pacific.

Bryan said interest in the coastal defense system is from “not just Army and Marines from the U.S. side – we are seeing significant interest from those island chain-type nations for international sales as well.” 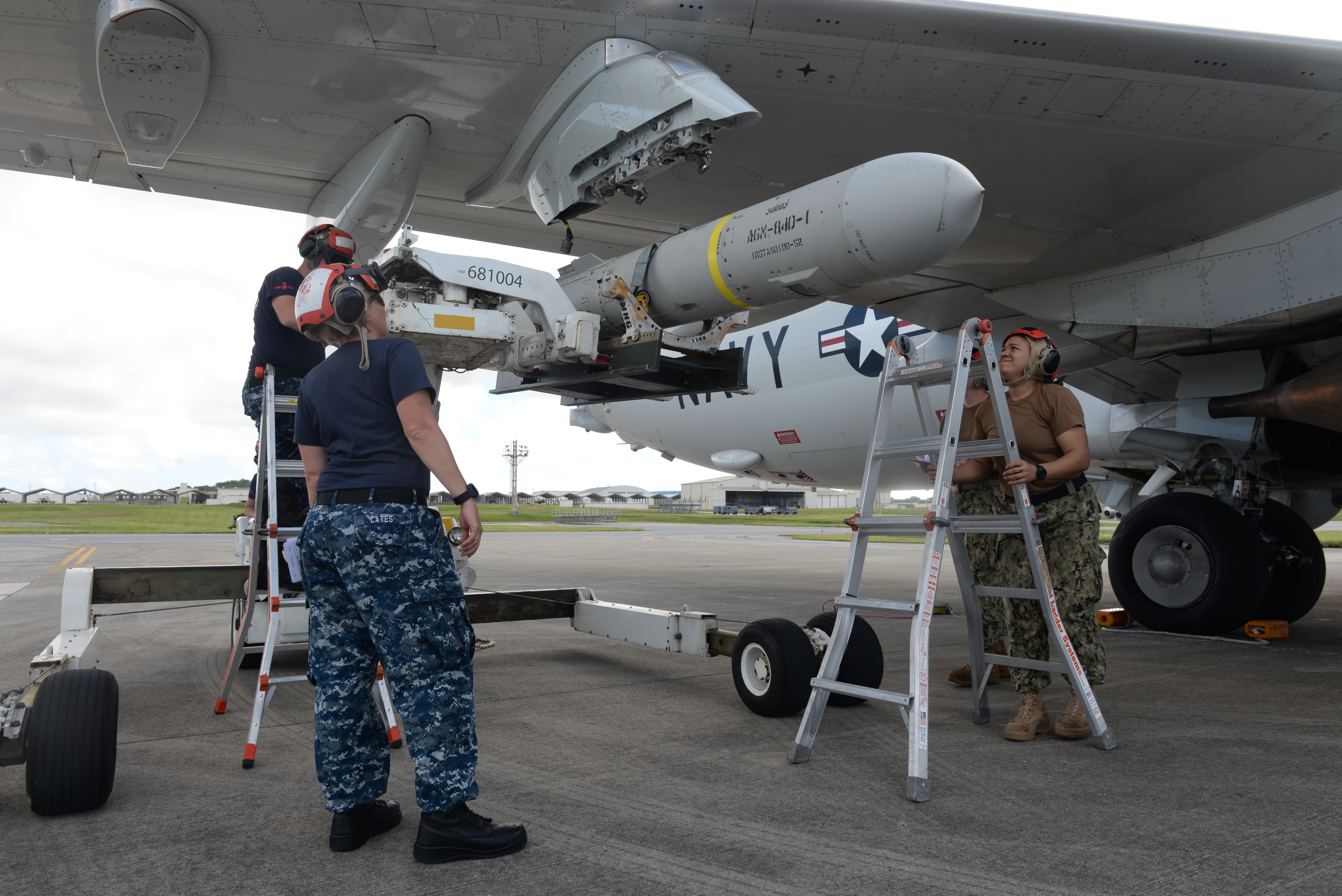 Sailors assigned to the Fighting Tigers of Patrol Squadron (VP) 8 use a forklift to onload an AGM-84D Harpoon missile onto a P-8A Poseidon aircraft at Kadena Air Base, Japan, on Nov. 29, 2017. US Navy photo.

As threats around the globe evolve, Harpoon as a mid-range missile may not be the forever solution, Bryan admitted. The Navy is pursuing long-range anti-ship capabilities through increments of an Offensive Anti-Surface Warfare (OASuW) program.

Asked what the future of Harpoon was beyond the current Block II Plus sales and trying to break into the shore-based defense business, Bryan said, “I don’t know how much more you want to invest in a medium-range anti-surface missile; I know OASUW, the offensive anti-ship increment II is out there and a little bit in limbo; I think there will be some kind of clean-sheet missile programs coming along, that’s probably where I think the Navy’s going to be best suited to put a large investment.”

“Until then, I think the capability of the Harpoon as a medium-range anti-ship missile is well suited: it’s kept up with the times, it’s got advanced electronics,” Bryan continued.
“We can bring a modern weapon that’s already in inventory, already has the support equipment in place – not just in place in the U.S.; in place worldwide with our international customers.”