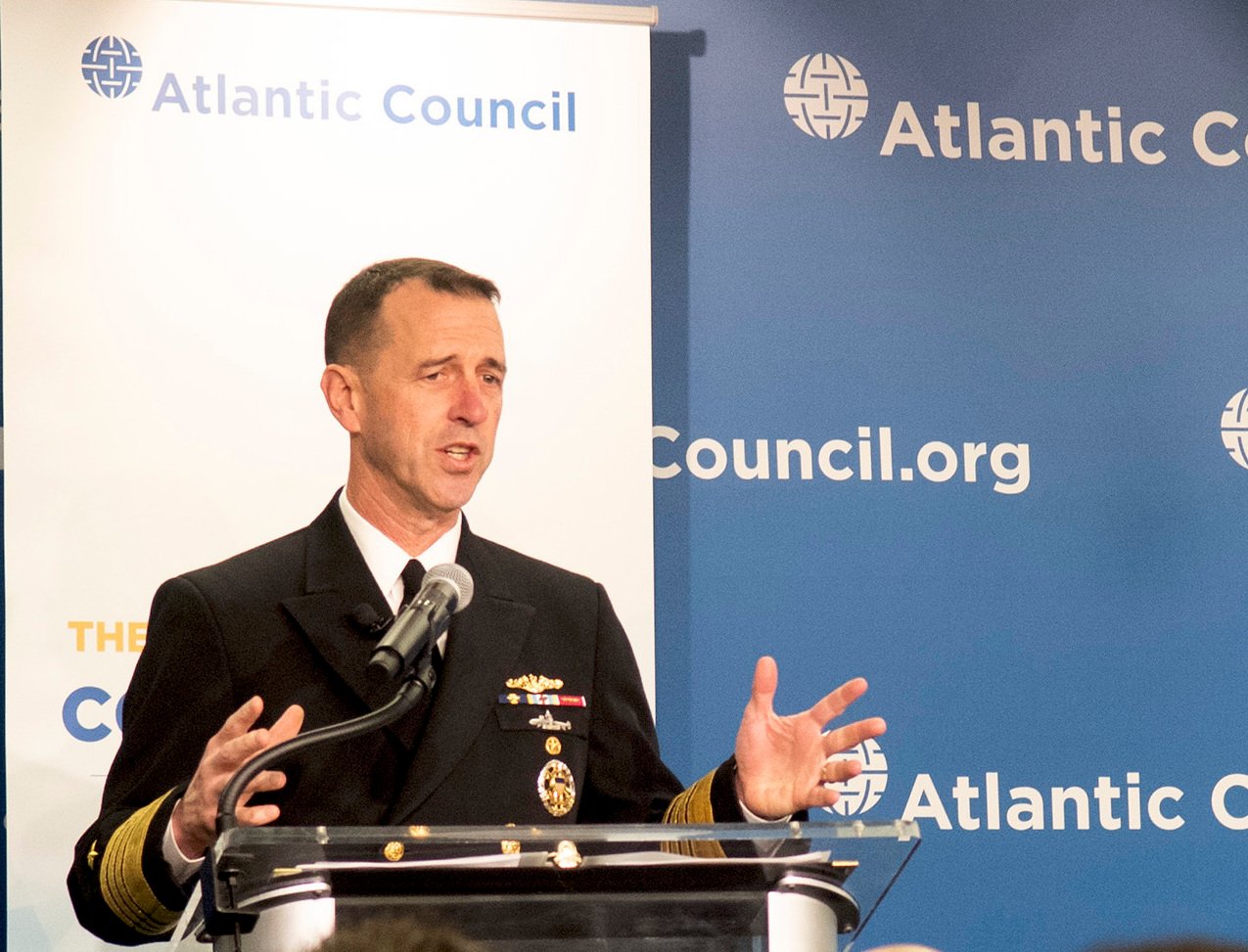 WASHINGTON, D.C. — The chief of naval operations upped his rhetoric regarding Russian and Chinese “gray-zone” aggression, saying the Navy needed to put pressure on Russia instead of passively reacting to the European competitor and calling for more “muscular” enforcement of rules of the sea when it comes to China.

Adm. John Richardson said at the Atlantic Council today that the Navy needed new concepts when it comes to dealing with Russia and China in gray-zone or competition short of conflict types of interactions. Much attention has been given to concepts and technologies for a potential high-end fight, but the CNO gave several examples of ongoing competitions that required a heftier U.S. response.

When asked by an audience member about how to deal with Russian aggression and military buildup in the Eastern Mediterranean and in the Black Sea, Richardson called for going on the offensive to put Russia on its heels.

The admiral said the U.S. needed to consider “not only responses in pushing back [against Russian aggression], but how do we push first in a couple of areas? I think it would be great if we could get folks, Russians, some of these competitors to respond to our first move. There’s an advantage every now and then to playing the white side of the board,” he said.

Speaking of previous deterrence efforts, CNO said “we’ve been consistently present in the Black Sea, the United States Navy, and in fact we did two deployments up there just in the month of January alone. We’re working very closely in exercising with the navies in the Eastern Mediterranean, the Black Sea region, so staying engaged in there, staying present. Actions consistent with words, I think, is an important part of that.”

Richardson then noted that “one area where we’re doing some new things is with respect to missile defense. So we have Aegis Ashore in Romania, I think that that capability makes a tremendous statement.”

The military had previously avoided tying the missile defense site in Eastern Europe to Russia, noting from its conception that it was meant to defend against Iranian missiles. This first Aegis Ashore system drew Russia’s ire, with the Russian Federation accusing the U.S. of violating the Intermediate-Range Nuclear Forces (INF) Treaty through the installation of this missile launcher – an accusation the United States denied.

Citing the U.S. Navy warship presence and the Aegis Ashore site, Richardson said they served as good deterrents to Russian aggression but “we’ve got to take our own side of this fight, we’ve got to give the other team something to respond to.”

He also noted repeatedly that the U.S. should not push against Russia alone but rather would be better served working alongside regional partners and NATO.

“Whatever leadership role we can provide there, I think as an alliance we bring more to the table together than any kind of a bilateral approach,” he said.

Asked later about what more the Navy could do to protect Ukrainian military and commercial ships from harassment by Russia in the Kerch Strait and Sea of Azov – waters that only Ukraine and Russia have rights to under international law and where the U.S. Navy cannot routinely patrol – Richardson said that any actions taken “must be done with a clear intent. So there should be the right to pass through the Kerch Strait into the Sea of Azov unharassed. And so once we define that as our aim, then the international pressure, the regional pressure and the robustness of the response there over time – there’s got to be a response. So the U.S. Navy by virtue of being consistently present [in the adjacent Black Sea], we exercise with the Ukrainians every single year, shows that level of commitment. And then the regional response, I think, certainly with U.S. participation, if not leadership, is going to be as important as anything as we increase the pressure and the consequences of that type of action. But trying to do this bilaterally is not going to be as successful as a regional and multilateral approach that squeezes in on a well-defined objective.”

On the topic of China – where Richardson recently visited – the admiral said the two navies were increasingly encountering each other at sea and ought to behave as safely as possible during those encounters. The two navies have a Code of Unplanned Encounters at Sea (CUES) that governs how ship captains ought to handle any meetings at sea, but Richardson said the U.S. may need to look for ways to impose consequences if these rules aren’t followed.

“One of the things we made clear during the visit to China was that, hey, in terms of rules of behavior on the high seas – first of all, we do have an operational construct that is designed to minimize the chance of miscalculation when two of our ships meet on the high seas. And since our presence there has been consistent in terms of force level and what we do, the Chinese navy is growing, there’s going to be more opportunities where we meet. And so these rules are going to be operative more and more. We should approach each other all the way down to the tactical level, our front-line commanders, in ways that actually make it easy for us to adhere to these rules of behavior,” he said.
“So let’s not be obstructing one another, driving our ships in front of one another, throwing obstacles in front of the ship. Let’s just be biased towards making it easy. And then these rules have to apply to all of the forces – so it can’t just be the People’s Liberation Army Navy to which they apply, but it’s also got to be the (China) Coast Guard and it’s also got to be the Maritime Militia, and everybody’s got to abide by these. Being more insistent about those would be a good first start.”

Looking beyond the current CUES rules, Richardson said, “we could start to see a rule set emerging that might have to do with this Automatic Identification System, this system that ships carry around that talks to where they’re going, what they’re carrying. It provides a lot of information. You could see a regime where, hey, you’re not squawking on AIS that’s consistent with where you are and what you’re doing; there might be some, depending on where you are, some reason to challenge,” he said.
“So just putting some of these enforcement mechanisms in so it makes it harder to play fast and loose with the rules. But you’ve got to make a move to enforce those things. I think a lot of that structure exists, it’s just we’ve got to be a little more muscular to enforce it.”