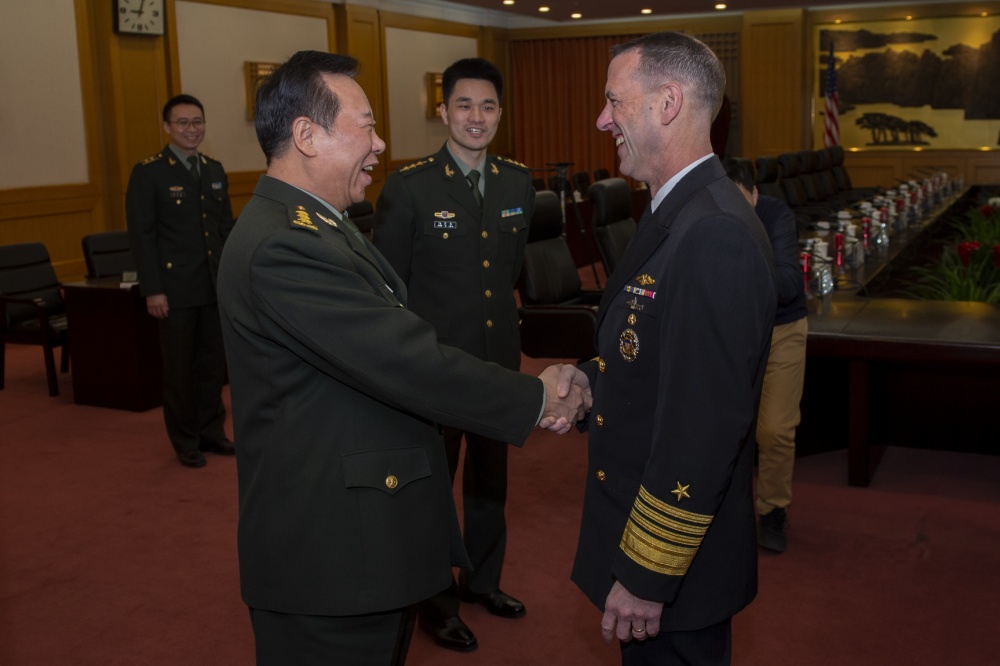 THE PENTAGON – Maintaining a consistent presence is the key to dealing with China on the high seas, Chief of Naval Operations Adm. John Richardson told reporters.

Given the frequent pace of U.S. Navy innocent passage and freedom of navigation operations in the South China Sea lately, Richardson said the best way to reduce the chance China’s leadership miscalculates when developing a response is to continue consistent operations in the region. Richardson used the word “consistent” more than a dozen times during his briefing.

“Our ships meet on the high seas,” Richardson said. “Let’s make it easy for our commanding officers to pass each other with minimal risk.”

During a half-hour briefing with the Pentagon press corps Friday morning, Richardson provided highlights from his recent around-the-world trip that included stops in China, Japan, USS John C. Stennis (CVN-74), and Rota, Spain. However, Richardson focused much of his remarks on his meetings with his Chinese counterparts in Beijing.

“It was a very frank discussion,” Richardson said. “It was clear where we had disagreements.”

Among China’s claims, Taiwan perhaps provides the most significant chance for a military interaction to escalate quickly. China maintains Taiwan is not independent but rather is part of the mainland nation. In a claim not recognized by international law, China also considers the roughly 110-mile wide Taiwan Strait as part of its territorial waters.

General Li Zuocheng, a member of China’s Central Military Commission (CMC) and Chief of the CMC Joint Staff Department, provided Richardson with China’s vision for Taiwan, according to the China Ministry of National Defense’s official account of Richardson’s visit.

“General Li Zuocheng stressed that Taiwan issue is China’s internal affair, bears on China’s core interests and the national feelings of the Chinese people, and allows no external interference. If someone tries to split Taiwan from China, the Chinese military will do whatever it takes to safeguard national reunification, national sovereignty and territorial integrity,” stated the Ministry of National Defense official English-language translation meeting description.

During the Friday briefing, Richardson relayed what he told his Chinese counterparts, which was that the U.S. Navy’s official policy toward Taiwan remains unchanged. U.S. policy does not dispute China’s claim to Taiwan. However, in keeping with international maritime law but contrary to China’s stated policy, the U.S. Navy does not seek permission nor provide Beijing with advance notice of Taiwan Strait transits.

“Our actions are consistent with our interests and our policy, particularly with respect to Taiwan,” Richardson said. “We made the point that we would object to any unilateral action on either side of the strait that would upset the status quo.”

A week after Richardson’s visit to Beijing, Arleigh Burke-class guided-missile destroyer USS McCampbell (DDG-85) and Henry Kaiser-class oiler USNS Walter S. Diehl (T-AO-193) steamed through the Taiwan Strait. This was the third such transit in the past four months.

“They have a vision for Taiwan. There was no flinching from having that honest discussion, which is, I think is, productive. We want to make sure that these discussions lead to greater understanding on each side,” Richardson said. “The American position on Taiwan is consistent.”