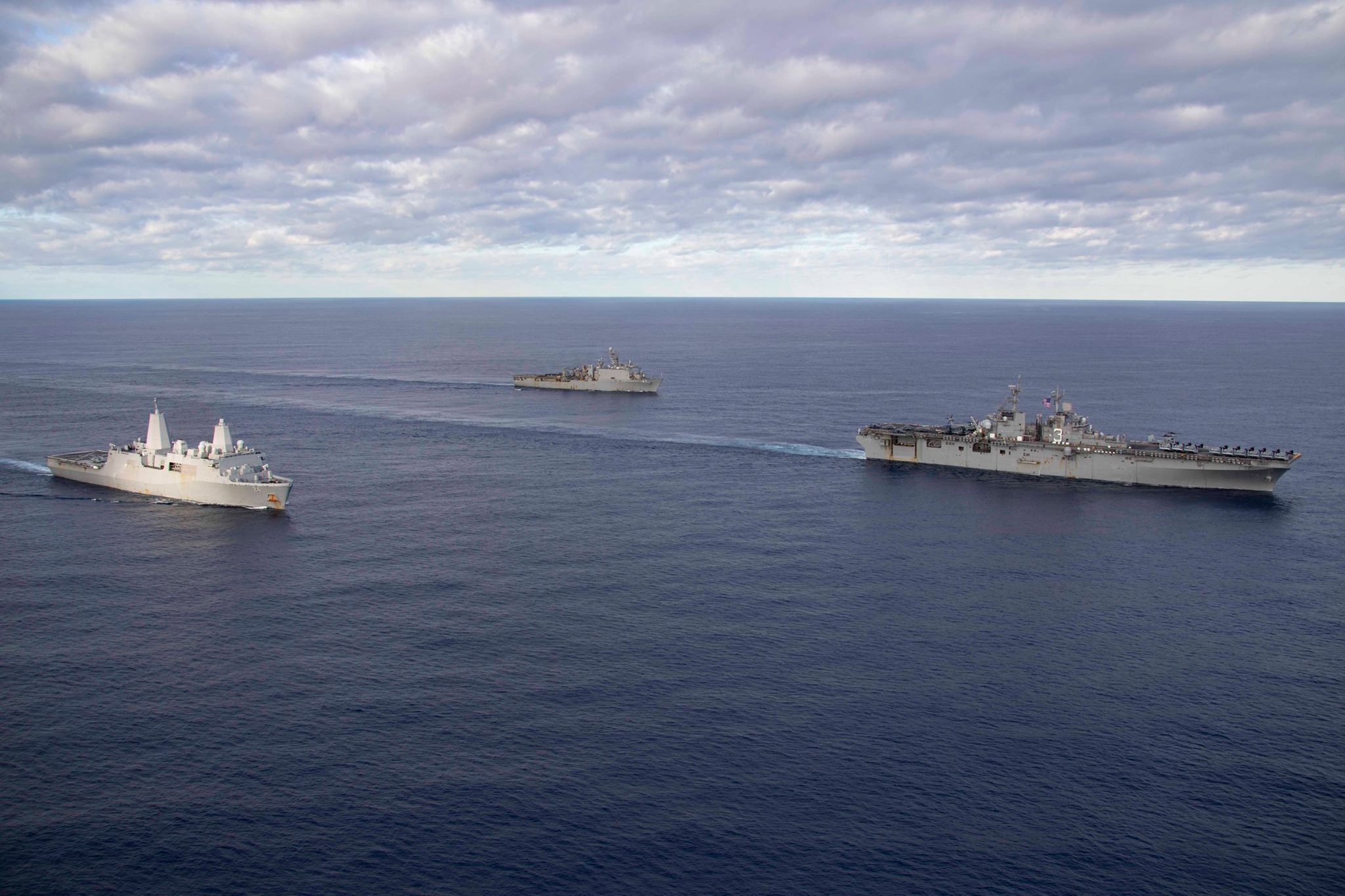 This post has been updated to reflect that the Navy is looking at truncating the modernization period for USS Whidbey Island, the next to go into a planned layup period. Due to source error, this story previously said the Navy was eyeing USS Tortuga, which is currently in a yard for modernization.

ARLINGTON, Va. – In an attempt to address a “capacity problem” in the amphibious ship fleet, the head of expeditionary warfare wants to accelerate the construction of new amphibious assault ships and stop a lengthy upgrade program for the aging LSDs to return them to fleet operations.

The aging Whidbey Island-class dock landing ships (LSD-41/49) will be replaced on a one-for-one basis with the much more capable San Antonio-class Flight II LPDs, once those are built and start to deliver in the 2020s. Until then, though, Maj. Gen. David Coffman, the director of expeditionary warfare on the chief of naval operations’ staff (OPNAV N95), wants to stop trying to bring the LSDs up in capability and instead return them to the fleet to do what they’re good at: hauling a lot of stuff.

Congress pushed on the Navy a modernization plan for its cruisers and LSDs; for the amphibs, it called for taking three LSD hulls, putting them in reduced operational status until they could undergo major upgrades to the command, control, communications, computers, collaboration and intelligence (C5I), and then bringing them back to the fleet with an extended service life and greater warfighting capability. The combat credibility of the LSDs was in question, as amphibious ships now mostly operate in a distributed manner but the LSDs cannot operate as independently as the LPDs, which have a much more robust command and control system, medical facilities and other key capabilities.

With a better-than-anticipated replacement on the horizon with the LPD Flight II design, Coffman said last week at the Surface Navy Association’s annual national symposium that he wants to ditch the LSD modernization plan, use the ships now as trucks to carry people and gear, and focus resources on the LPD Flight II replacement program.

“I cannot find a path to robust disaggregated or contested environment capability enhancements for those ships. So we are not going to double down in that fashion,” Coffman said of the LSDs.
“But we owe the captains and sailors readiness and safety and proficiency, and there is a lot there if you move back towards what we built them for: to exploit the well decks, massive square foot and cubic foot, massive cranes, et cetera et cetera. We recommend not to [do a service life extension program]. … We are already in an effort to truncate the layup [period] for [USS Whidbey Island (LSD-41)], which we set aside, akin to the cruiser layup. Get ‘em up, get ‘em safe, get ‘em proficient, get ‘em in the fleet to fill day-to-day requirements and see what they can do and contribute with all that capacity.”

BAE Systems won a contract in November 2017 to conduct the USS Tortuga (LSD-46) modernization, which started a year ago and should end this spring. USS Whidbey Island (LSD-41) and USS Germantown (LSD-42) are also included in Congress’ ship modernization and life extension plans, and USNI News understands Whidbey Island is slated to go into the modernization event next. 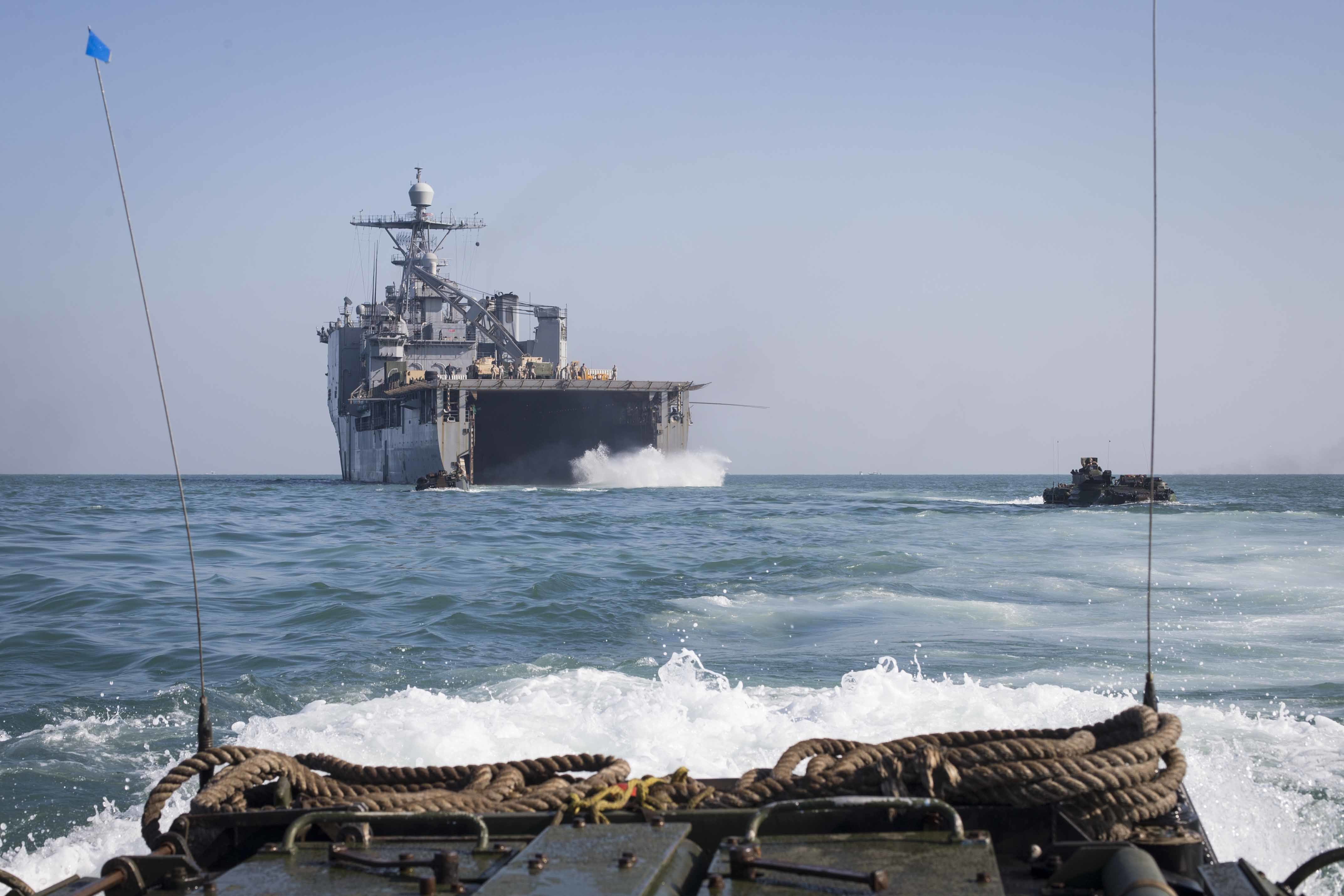 If Coffman was not interested in upgrading the LSDs before they age out of the fleet, he is very interested in modernizing the original 13 Flight I LPDs as they begin to hit their mid-life service availabilities in the 2020s.

As the LPD Flight II ships are built throughout the next decade – hopefully in a block buy contract at a one-a-year rate, he said – USS San Antonio (LPD-17) and other early amphibious transport docks will be approaching their mid-life availabilities. Under an Amphibious Warship Evolution Plan to add capability and lethality to the amphib fleet, Coffman said advances built into the Flight II LPDs could be backfit into the older Flight I hulls. This would both boost the older ships’ capability while also increasing commonality between Flight I and II.

Capt. Brian Metcalf, LPD program manager within the Program Executive Office for Ships, said during his own presentation at the SNA conference that “the idea is … when that availability upgrades LPD-17 at its midlife, it will stay common with what we’re doing for Flight II. So the two ship classes should not stay diverged in terms of the systems that they ever have.”

Due to changing technology and somewhat scaled down requirements, there are some differences between Flight I and Flight II ships. Those differences that can be addressed during LPD mid-life upgrades – backfitting in the Consolidated Afloat Networks and Enterprise Services system, as well as computer and other systems to support the new Ship-to-Shore Connector and CH-53K helicopter instead of the legacy Landing Craft Air Cushions and CH-53E, for example – will be done during the LPD-17 mid-life availability and will further increase commonality between Flight I and Flight II, which will help keep maintenance and training costs down, Metcalf said.

Metcalf told USNI News during his presentation that he is working with Coffman’s office to look at ways to increase lethality of both the new LPDs during construction and the older ones during their maintenance availabilities. There had been some talk of installing Vertical Launching System (VLS) cells into the Flight II ships, since there is still space for the cells in the design.

Asked about the status of those talks, Metcalf said Flight II “will not have it in it when the contract is signed, is probably the safest thing I can tell you. The concept of adding capability to the ships is something that N95 is still working with the Marine Corps and the Navy on in their capability evolution plan. So the future ability to add that capability exists.”

“I’ll answer you a little bit differently as well: to be able to launch a missile, you do not have to have a vertical launching system,” he continued.
“So we’ve encouraged them to find a requirement – what are we trying to defend against, or what kind of operational parameters or scenarios are we trying to build the ship to meet – and we’ll give them many options on how they can slice that. And vertical launch will be one of them, but it’s not the only option.”

On the big-deck amphibious assault ships, Coffman proposed accelerating acquisition timelines and investing in a massive mid-life upgrade availability, akin to an aircraft carrier’s refueling and complex overhaul, to increase the capability and capacity within the LHA/LHD fleet.

The Navy wants to have 12 amphibious assault ships, to complement the 26 combined LPD Flight I and II ships it will ultimately have. However, with the future Bougainville (LHA-8) under construction now but a gap in production before the Navy would buy LHA-9, not only does the shipyard risk losing experienced workers and missing out on the lower costs that come with serial production, but the Navy puts at risk its ability to have 12 big decks in the fleet at once. USS Wasp’s (LHD-1) planned retirement in 2029 looms over these plans, Coffman reminded the audience during his talk.

The Navy is looking at extending the life of Wasp, he said, because without doing so it is hard “to see a pathway that gets to, maintains and sustains a 12-big-deck fleet, and that’s a problem.” Without having 12 ships in the fleet, those that are in service are worked harder and have less time for maintenance, which Coffman told USNI News starts a downward spiral that the amphibious fleet has seen before and does not want to start again.

As for LHA-9, which is currently set to be bought in 2024, the Navy is “in debate on timing. We currently have a big gap in the production years, discussion about accelerating LHA-9, maybe getting two at a time.”

The Navy chose to buy two aircraft carriers in a single contract, in a decision signed out by the Pentagon on Dec. 31. A similar decision for LHA-9 and 10 would allow the ships to be designed and built as “twins” instead of having slight variations, saving on some design and planning costs, and would give sole contractor Ingalls Shipbuilding some stability that would also reduce costs and schedule. Coffman said he was confident Ingalls and its suppliers had the capacity to accelerate LHA production beyond the Navy’s current plans, as outlined in the Fiscal Year 2019 shipbuilding plan.

Just as Coffman is advocating a more “aggressive” LHA procurement schedule, he’s also trying to get top Navy and Marine Corps leadership to buy into an RCOH-like approach for the Wasp-class’s midlife availability, taking the ships out of service for a length of time that no operational plans could impinge on and ensuring that resources are devoting to making the hull more ready and more capable upon its return to the fleet.

With past LHD availabilities, “we have not been able to get dollars, requirements, materiel in place at the right time to make the major moves we need to make, nor get the regular lifecycle maintenance across this big plant, big spaces and all the work we’ve got to do here,” he said.
“It’s counterintuitive – I talked to [the secretary of the Navy], [commandant of the Marine Corps], [chief of naval operations], all the senior leadership about this, said it’s going to take some big boy help because like the carriers, it’s counterintuitive to your problem of not having enough. What’s the answer to not having enough ready? Take one entirely offline and finally get it right, which is what we’re proposing.” 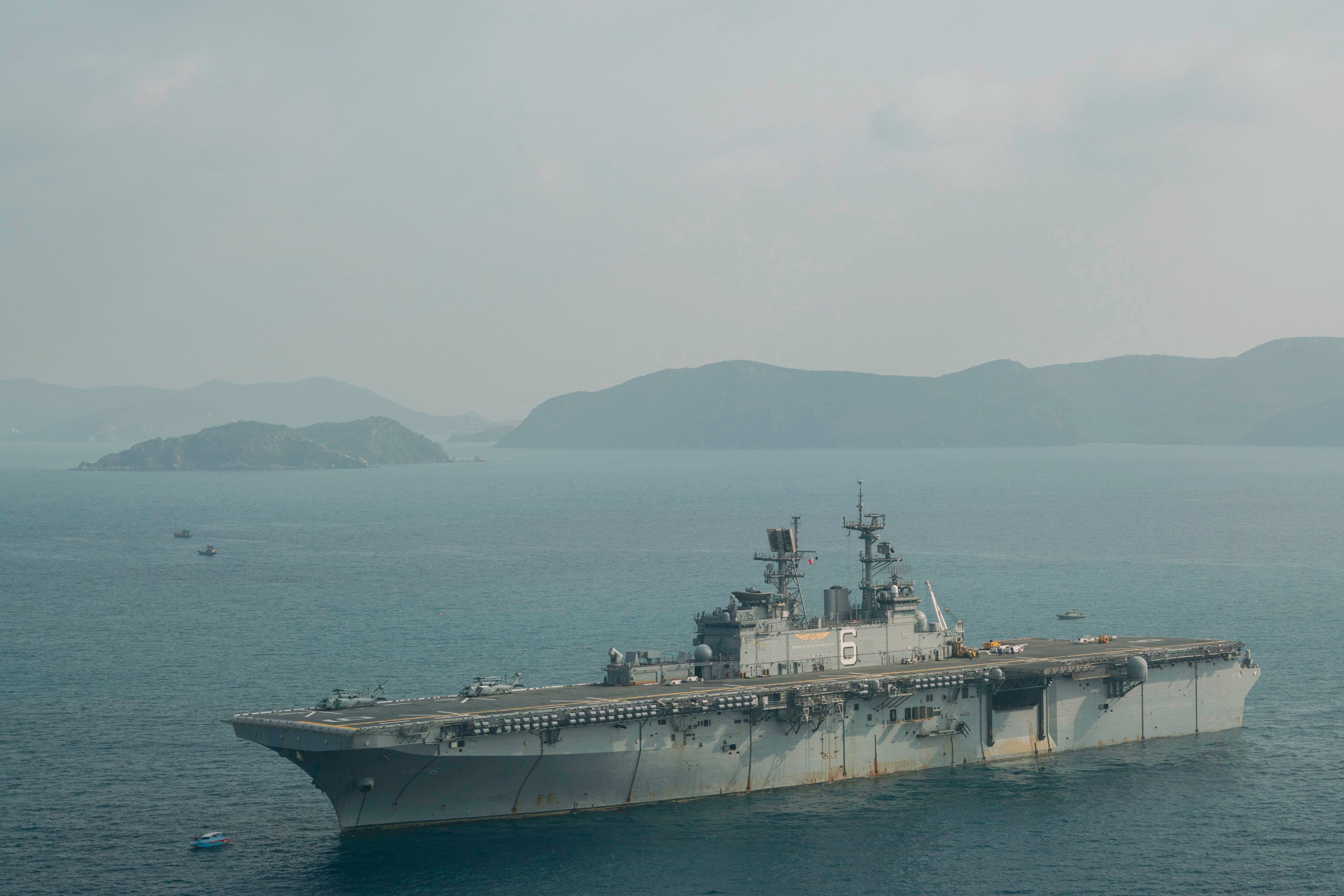 The amphibious assault ship USS Bonhomme Richard (LHD 6) operates in the Gulf of Thailand to support Exercise Cobra Gold 2018 on Feb. 16, 2018. Bonhomme Richard is participating in CG18 alongside Royal Thai Navy ships and personnel, conducting a range of amphibious operations that will enhance tactical expertise of participants and flex combined capabilities to respond to contingencies. US Navy photo.

Coffman said USS Bataan (LHD-5) would be the guinea pig for this idea in 2023. He said it may take $500 to $600 million for the availability, which he acknowledged was a big ask, but it would get the amphibious navy “out of this cycle of national treasures late or not getting modernized” during regular maintenance availabilities due to lack of funding or backlogs at the shipyards.

Despite the many needs the amphib fleet faces, Coffman said he was confident the amphibious navy was on the right track. Whereas the surface navy is searching for a hull that can accommodate its future needs, Coffman is committed to the LPD and LHA hull forms and called them “the right hulls for what we need to do in expeditionary warfare … now and into the future.”

With the right hulls as a starting point, he said, “what we’re doing is modernizing and enhancing the capabilities of our ships across all functional areas, with particular emphasis on improved lethality, survivability and a networked C5I architecture fully embedded and nested with [the surface navy’s] evolution plan.”