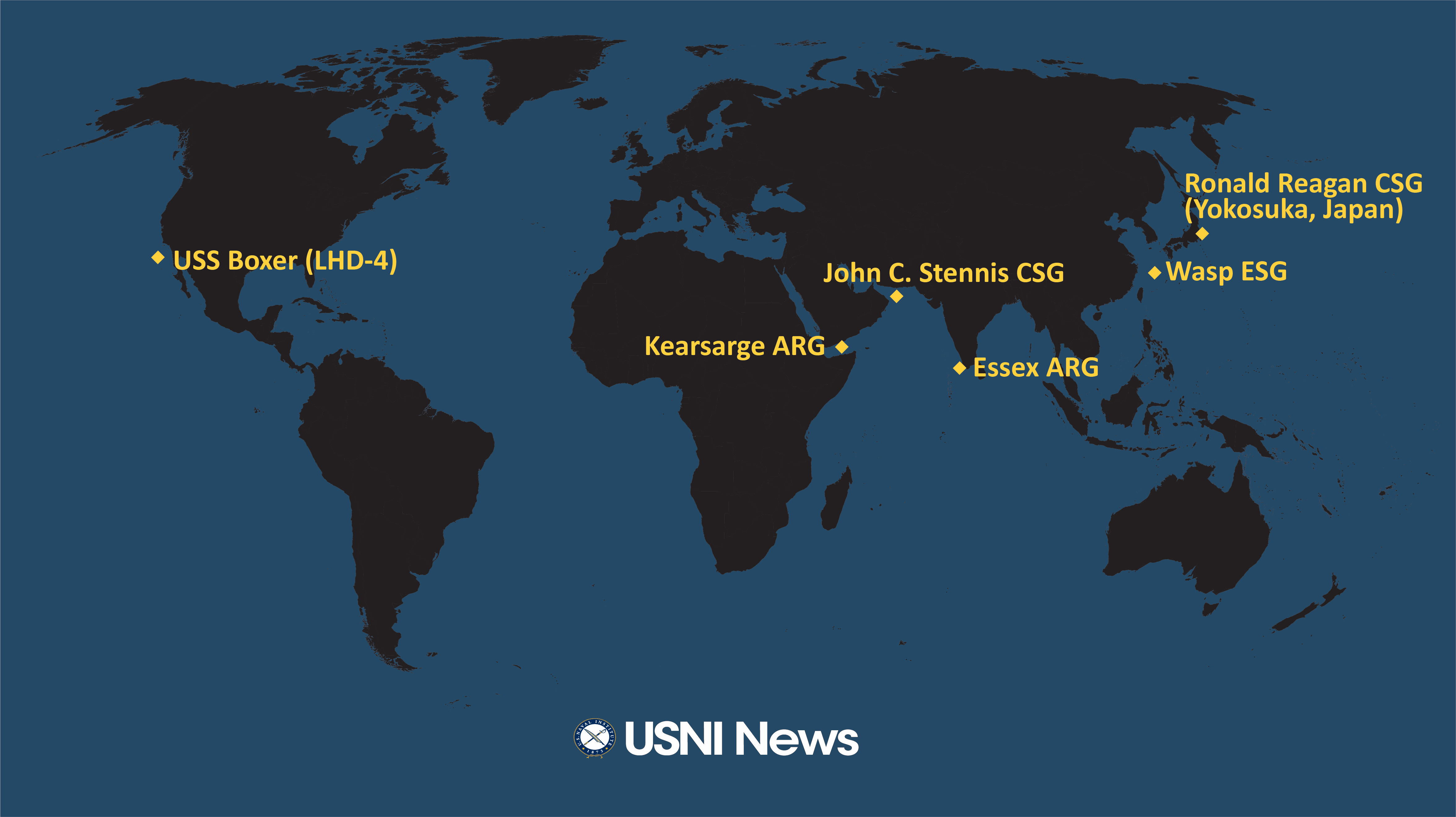 These are the approximate positions of the U.S. Navy’s deployed carrier strike groups and amphibious ready groups throughout the world as of Jan. 22, 2019, based on Navy and public data. In cases where a CSG or ARG is conducting disaggregated operations, the chart reflects the location of the capital ship. 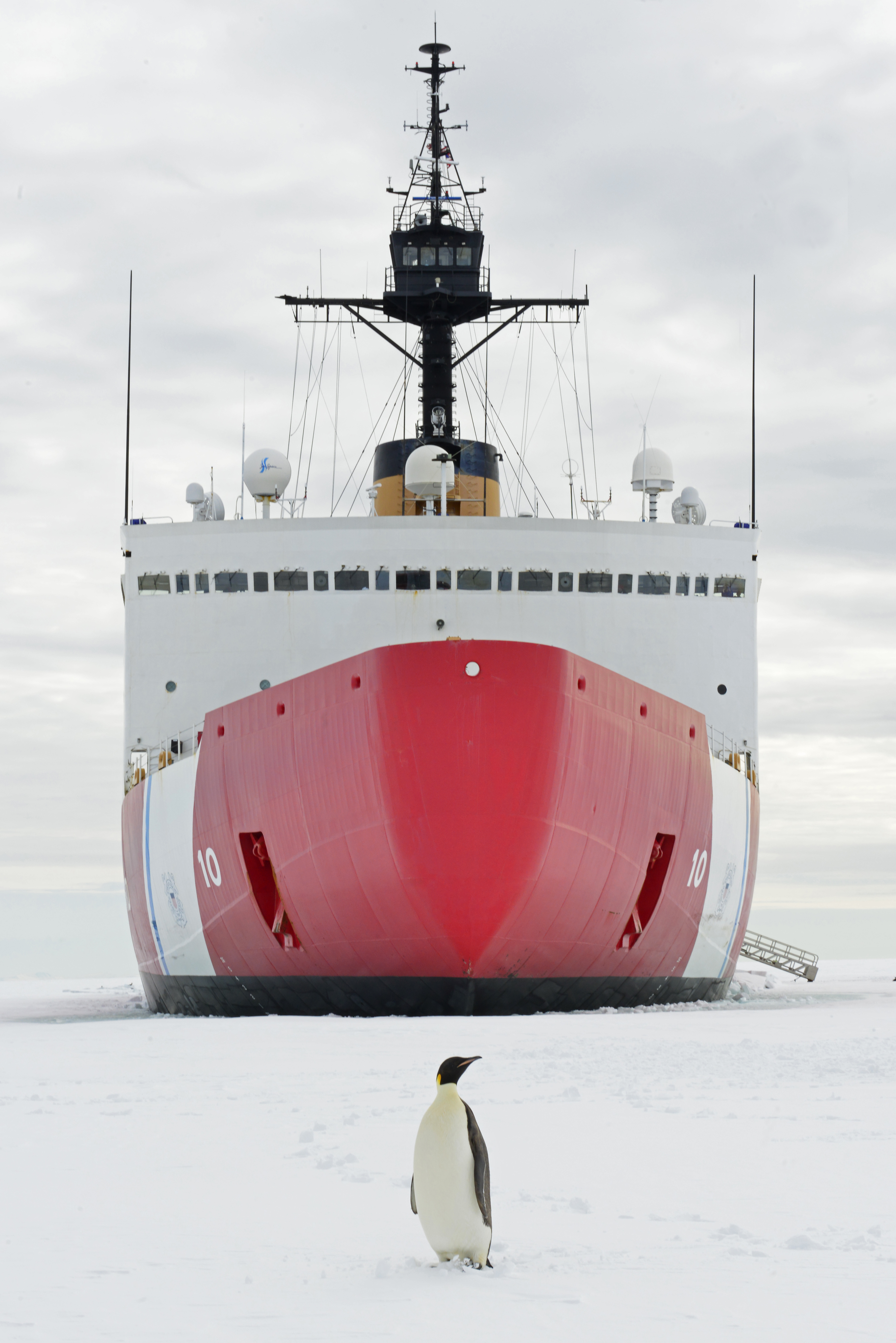 An emperor penguin poses for a photo in front of the Coast Guard Cutter Polar Star in McMurdo Sound near Antarctica on Wednesday on Jan. 10, 2018. US Coast Guard Photo

USCGC Polar Star (WAGB-10) arrived in Antarctica on Thursday as part of the Coast Guard’s annual mission to deliver supplies to the U.S. outpost on the continent. The heavy icebreaker cut through 18-miles of ice in McMurdo Sound, clearing the way for ship Ocean Giant to off-load 400 containers at the station.

“Each year, the Polar Star creates a navigable path through seasonal and multi-year ice, sometimes as much as 21 feet thick, to allow a resupply vessel to reach McMurdo Station. The supply delivery allows multiple Antarctic stations to stay operational year-round, including during the dark and tumultuous Antarctic winter,” read a report in The Maritime Executive. 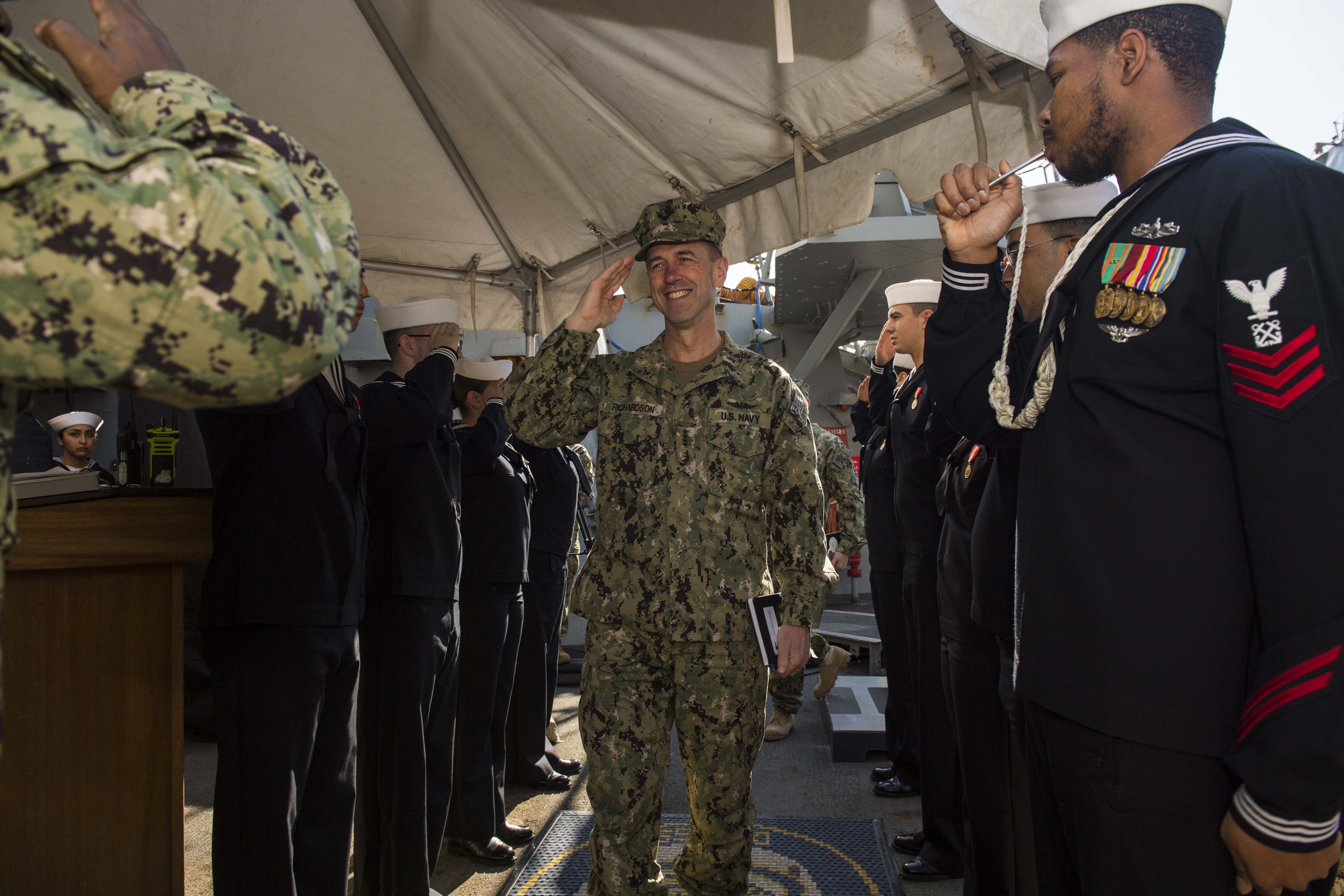 The Ronald Reagan Carrier Strike Group (CSG) is in homeport in Yokosuka, Japan. On his return from a meeting with military counterparts in China, Chief of Naval Operations Adm. John Richardson visited U.S. warships on the waterfront at Yokosuka. 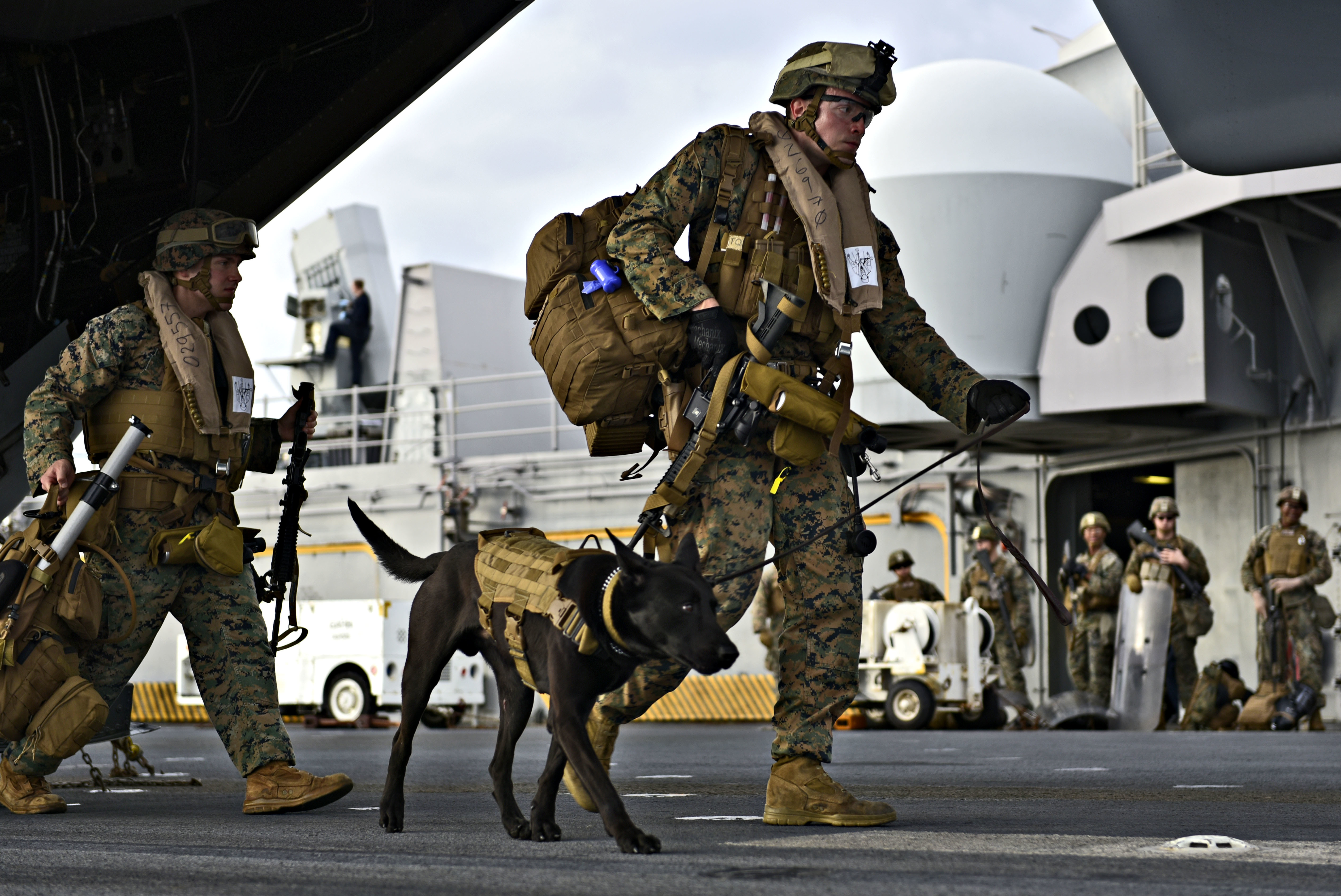 Sgt. Mark Smith, from Chester, West Virginia, and Oohio, a patrol explosive detection dog, with the 31st Marine Expeditionary Unit (MEU) exit a MV-22 Osprey assigned to the “Flying Tigers” of Marine Medium Tiltrotor Squadron (VMM) 262 (Reinforced) along with other Marines of the 31st MEU aboard the amphibious assault ship USS Wasp (LHD-1) on Jan. 22, 2019. US Navy Photo 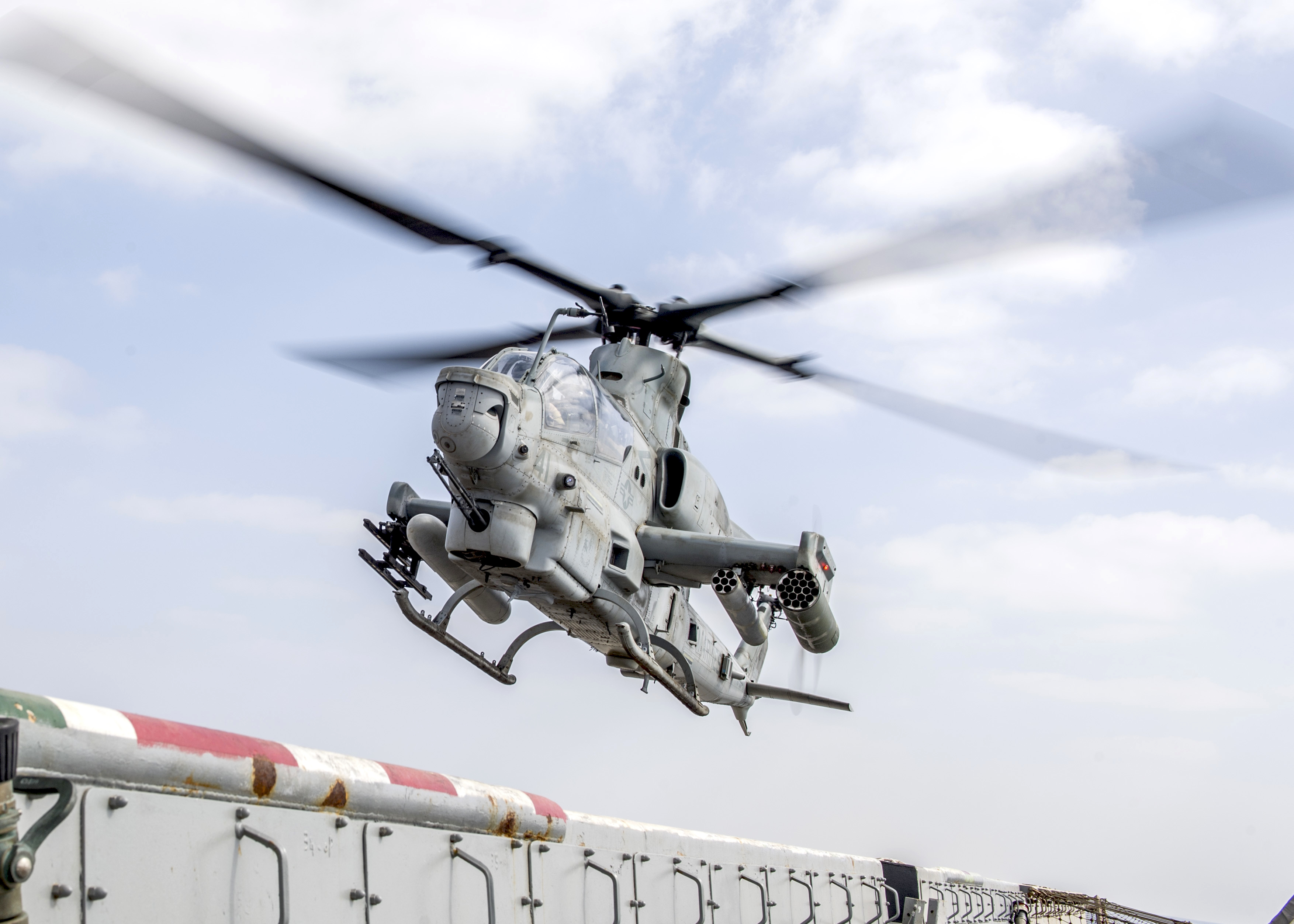 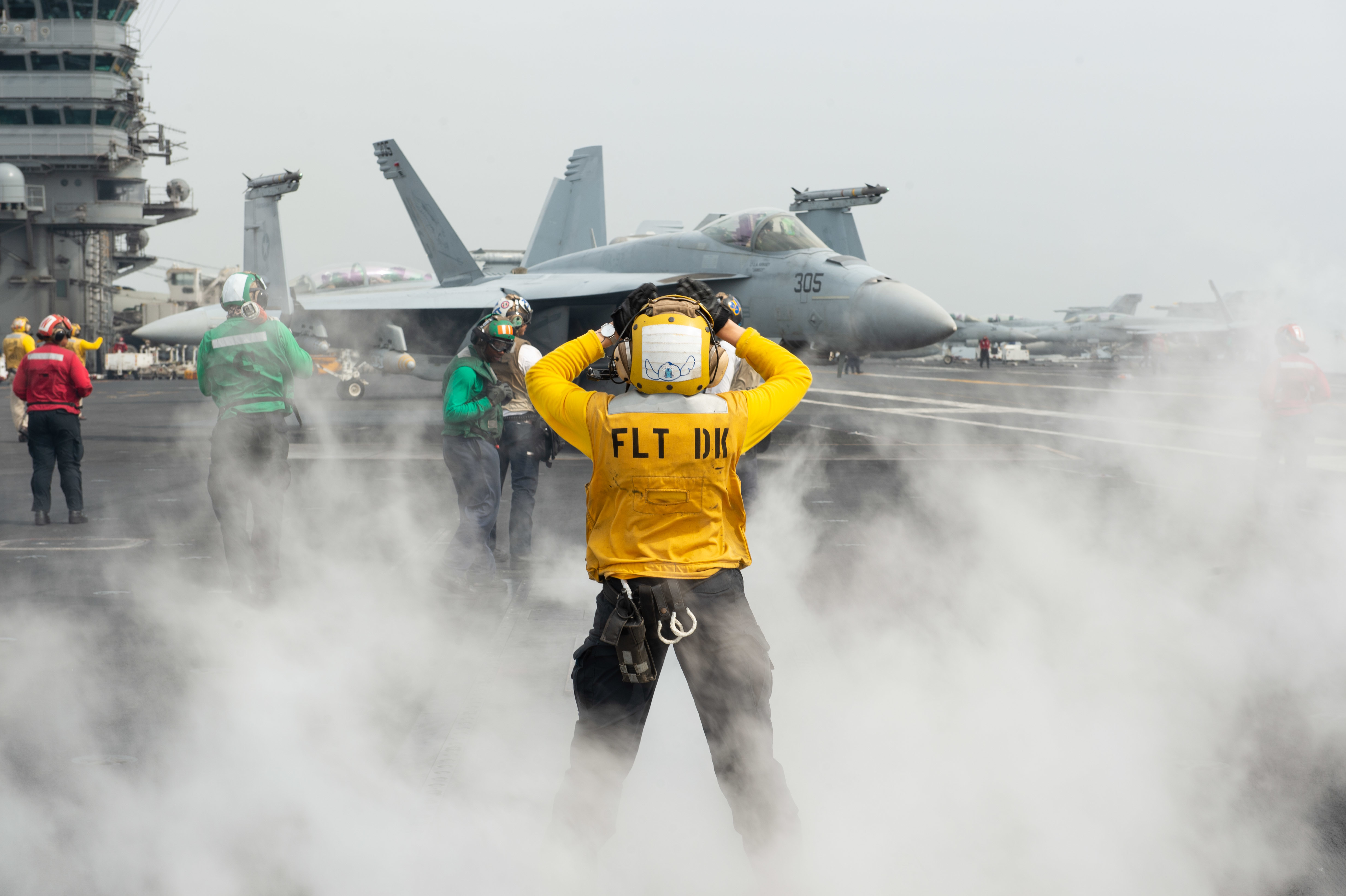 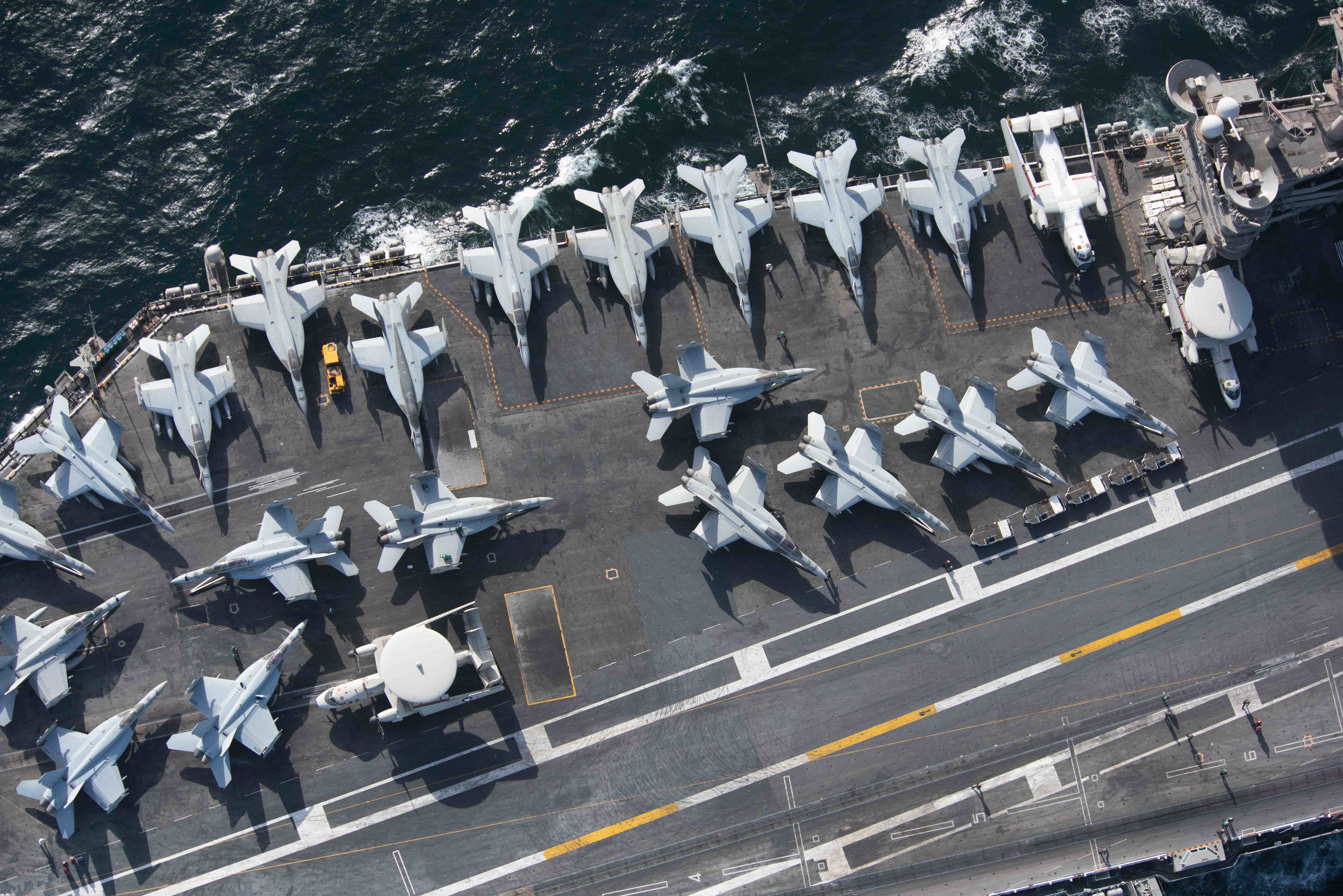 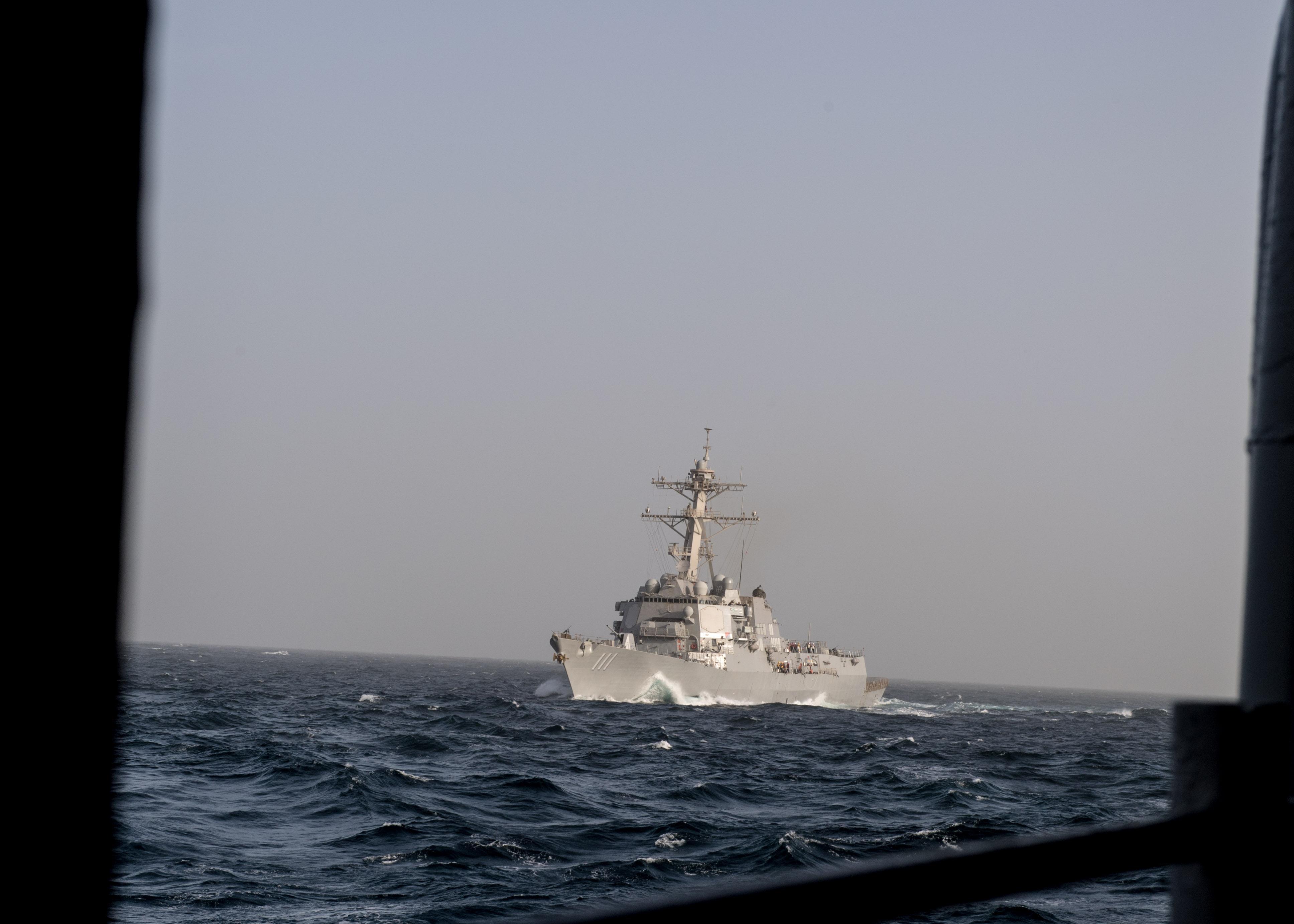 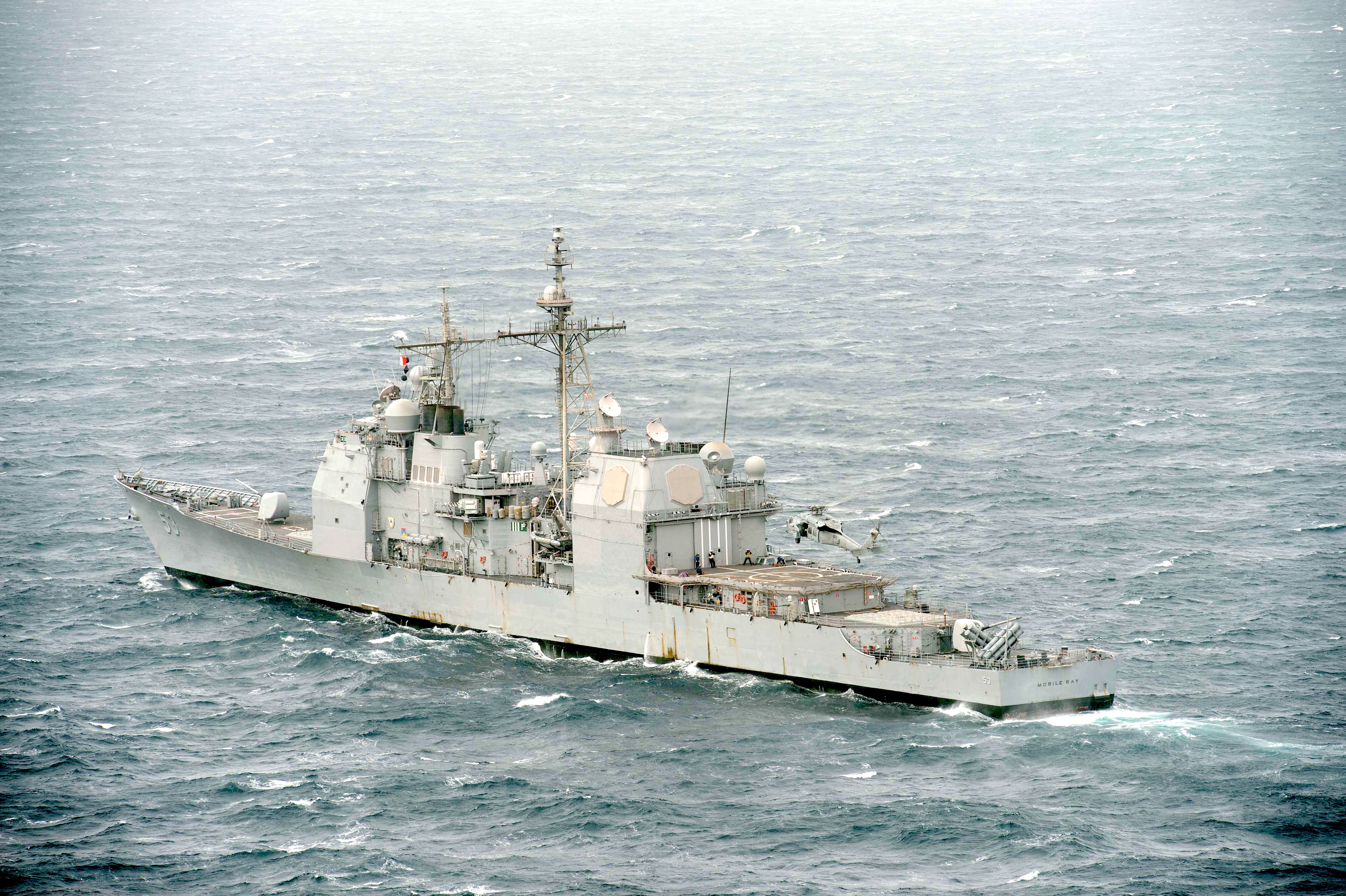 An MH-60S Sea Hawk, assigned to Helicopter Sea Combat Squadron (HSC) 14, lands on the flight deck of the guided-missile cruiser USS Mobile Bay (CG-53) in the Persian Gulf on Jan 17, 2019. US Navy Photo 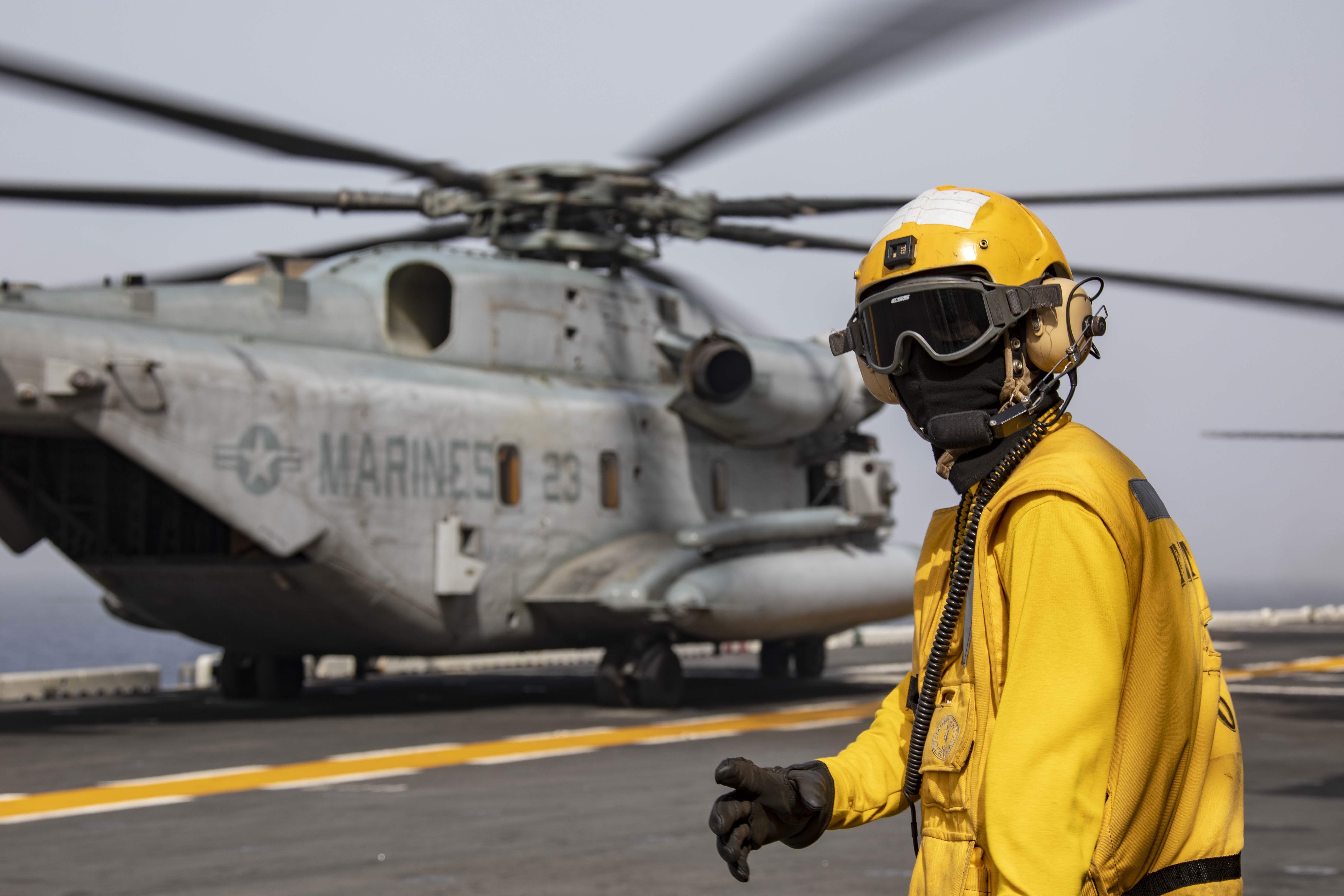 The Kearsarge ARG and embarked 22nd MEU are now in the Gulf of Aden. 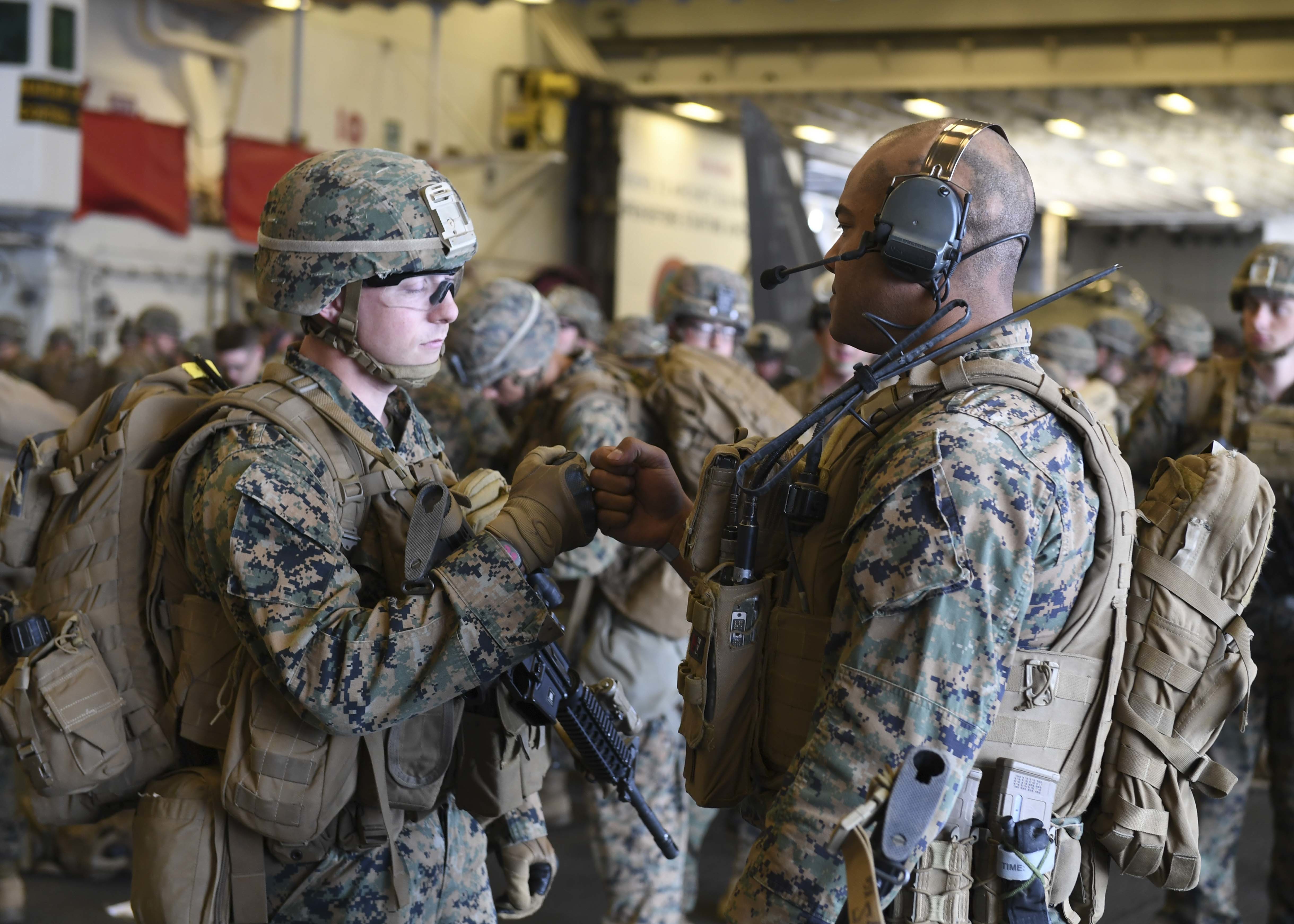 USS Boxer (LHD-4) is underway in the Southern California Operating Areas off of San Diego with a Marine aviation element embarked.