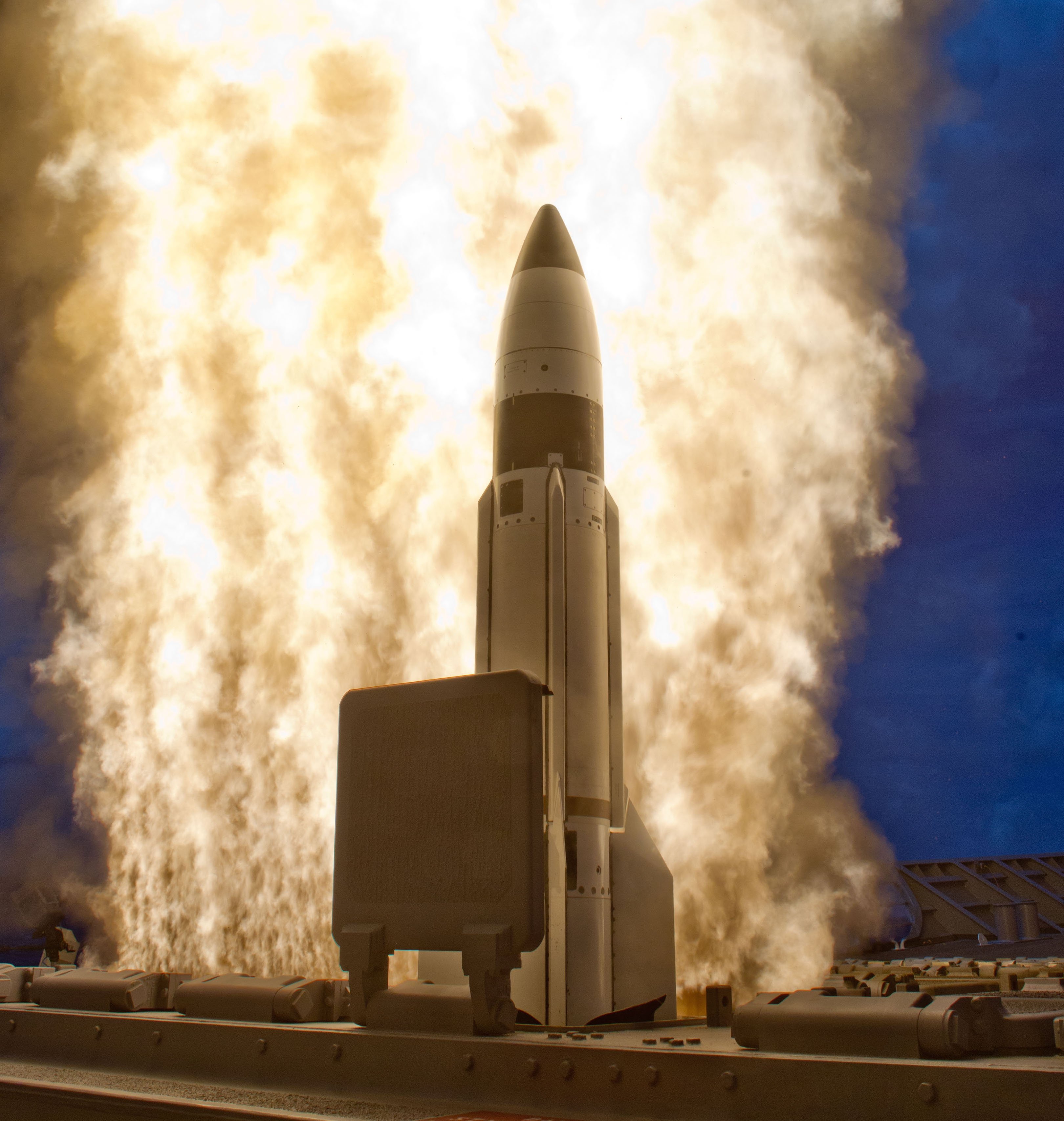 130918-D-ZZ999-007
An SM-3 Block 1B interceptor is launched from the guided-missile cruiser USS Lake Erie (CG-70) during a Missile Defense Agency test and successfully intercepted a complex short-range ballistic missile target off the coast of Kauai, Hawaii. DoD

President Donald Trump said his expanded, space-based missile defense program’s goal is to detect and destroy any incoming missile fired by “hostile powers or by mistake” at the United States or its allies.

Speaking at the Pentagon Thursday, he said, “We have some very bad players out there,” specifically mentioning a recent failed Iranian long-range missile test.

Trump said the release of the Pentagon’s budget next month will provide the some of the details on the placement of 20 new ballistic missile defense ground interceptors at Fort Greely, Alaska, as well as new sensors and steps proposed for future missile defense.

His presentation at the Pentagon was the first step in releasing the administration’s long-delayed Missile Defense Review that examines new developments in missile capabilities by China, Russia, and North Korea, as well as Iran.

Reviewing the threats from regional powers, like Iran and North Korea, have been cited as the reasons for the delay in the review’s release.

“We’re going to change much faster than the rest of the world” when it comes to developing defensive and offensive missile systems “to shield every city in the United States,” the president said. The defense system, Trump added, will cover hypersonic and cruise missiles as well as ballistic missiles.

The United States will no longer be “held back by self-imposed limits” of what it can and will do to defend itself and allies and partners. Left unsaid in the president’s remarks were the roles of Aegis Ashore or Aegis guided-missile destroyers and cruisers and the possible use of the F-35 Lighting II Joint Strike Fighter in this expanded view of missile defense.

The new budget, which he said would his biggest and the Pentagon’s largest “three years in a row,” will provide for a Space Force and consider space “a new warfighting domain.” In introducing Trump, Vice President Mike Pence called the Space Force the sixth armed service.

Trump pledged his administration will “remove bureaucratic obstacles” to speed the technological developments necessary to provide this kind of high-energy laser shield, especially looking at the “boost phase” destruction of missiles fired by an adversary. This would be especially important for missile defenses on the Korean Peninsula.

A top Pentagon technology official said recently the initial step would come in the deployment of a constellation of space-based sensors.

In his remarks, Trump added that as these technologies advance the United States would be willing to sell them to allies and partners, just as it would be open to more sharing on early warning of missile launches with them.

Trump said he will “insist on fair burden-sharing” in developing and paying for systems that will be made available to allies and partners. “I’m only asking them to step up” and again castigated “wealthy, wealthy, wealthy” nations like Germany for not meeting NATO targets of 2 percent of their gross domestic products being spend on security. “They can easily pay the cost of this protection.”

How these proposals on using space as a warfighting domain and large investments in new, largely undeveloped technologies for weapons systems will fare in the new Congress is unclear with the Democrats now controlling the House of Representatives.