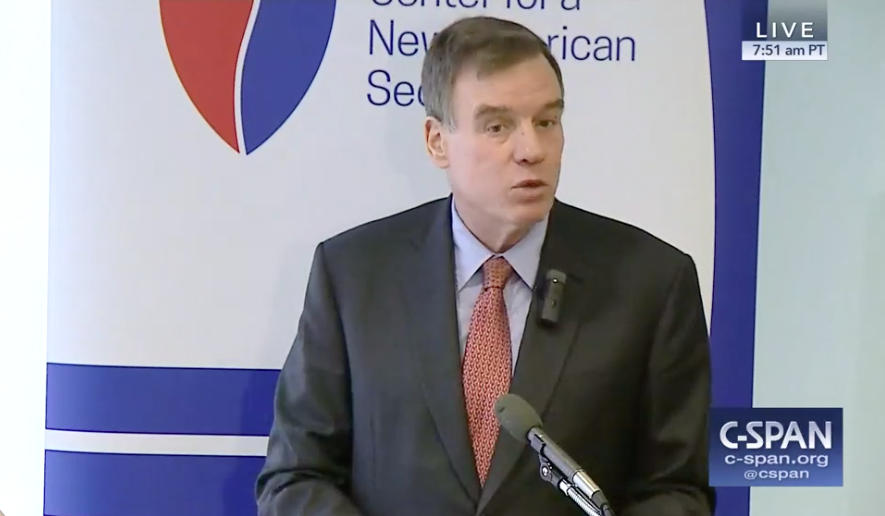 WASHINGTON, D.C. — The vice chairman of the Senate Select Committee on Intelligence gave a sobering assessment of the expanding ability of Russia and China to interfere with U.S. institutions through cyber and disinformation campaigns.

Sen. Mark Warner (D-Va.) said the General Accountability Office “found almost all our new weapons systems are vulnerable” to cyber attacks, he said in a Friday speech at the Center for a New American Security.

“If at the seams we don’t have protections, you have vulnerabilities,” he said. The GAO said even inside the Pentagon’s newest systems, ”DoD’s weapons are more computerized and networked than ever before, so it’s no surprise that there are more opportunities for attacks.”

Outside the Pentagon, the so-called internet-of-things is a growing vulnerability for all sectors of government, he added. Vulnerabilities are multiplying, Warner said, and there is no penalty for not closing gaps or failing to tighten security.

What is adding new intensity to this concern in the defense realm is Moscow’s and Beijing’s spending on disinformation, misinformation and cyber even as the United States’ $716-billion Pentagon budget largely goes to conventional weapons and personnel costs rather than offensive and defensive cyber advances, Warner said.

“Russia is already our peer” in cyber, and “in misinformation and disinformation is ahead of us,” the senator said

Warner noted multiple times during his presentation that the Kremlin’s disinformation and misinformation efforts have often succeeded in causing confusion among electorates and sowing doubt over the results: in the 2016 U.S. election, in the French presidential campaign, and in the Brexit referendum in the United Kingdom, as examples.

The reality is Russia “spent less than the cost of an F-35 to interfere in the United States, France and Brexit” in those elections. Not standing still, Moscow and Beijing are now pursuing “deep fakes,” where videos of prominent figures are tampered with to change the audio message, escalating misinformation and disinformation operations in their favor.

China is investing in Artificial Intelligence and 5-G communications technology. China is “starting to outperform us” in those tech areas, with the goal to lead the world, Warner said when answering an audience question. Major Chinese firms like ZTE and Huawei are not just copying or stealing from American or European companies, but developing their own systems.

Warner added these companies and the Chinese government itself are offering themselves as models of rapid technological development and how to leverage the internet to their own advantage – from commerce to political control.

No longer does the West believe the “internet is going to change China,” he said.
“We’re seeing the limits of that [now].”

As he has in the past, Warner said another danger in letting the Russians and the Chinese gain ascendancy in these technology areas is having authoritarian governments – Russia, China, Iran, North Korea and even Myanmar – set the norms for international behavior in cyber and information operations.

Warner has already been highly critical of how U.S. tech companies like Facebook and Google have handled emerging issues like misinformation campaigns and cyber threats, and he wants to make clear through agreements with U.S. allies and partners and with industry that the abuse of technology and the internet will have consequences.

Warner said the 2019 defense authorization law took a step in that direction though its directive to the Pentagon to build up its offensive cyber capabilities.