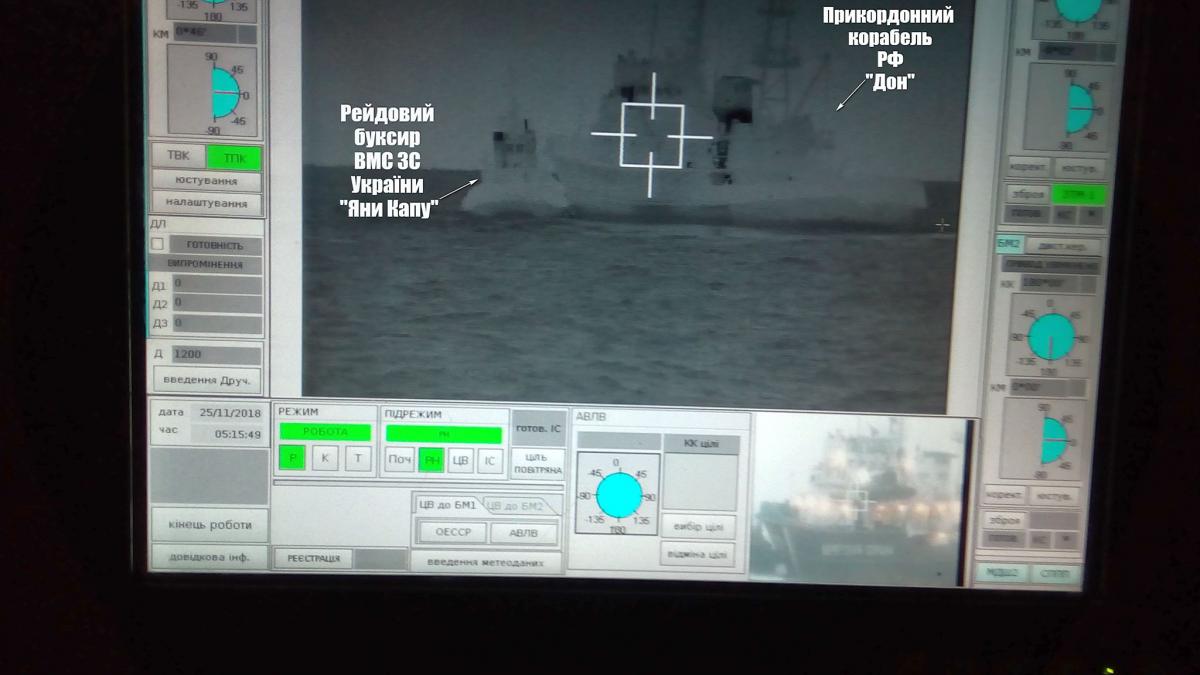 Russian maritime forces have fired on and seized three Ukrainian naval vessels that were attempting to sail from the Black Sea into the Sea of Azov.More than 20 Ukrainian sailors were also detained by Russians – several of them reportedly suffering injuries – after open hostilities erupted on Nov. 25 in the Kerch Strait, which separates Russian-occupied Crimean Peninsula from mainland Russia.

Tensions between the two countries were today at boiling point as senior Ukrainian officials accused the Kremlin of initiating an “act of military aggression.” The parliament in Kiev was considering whether to impose martial law, according to media reports.

Moscow, which also scrambled fighter jets and helicopters to the area, justified its actions by claiming that the Ukrainian units had entered Russian territorial waters without permission.

Under a 2003 treaty signed by Ukraine and Russia, the Kerch Strait and the Sea of Azov – on the northern side of the strait, with the Black Sea being south of the strait – are shared territorial waters and vessels from both nations are entitled to navigate freely in the area.

Although Kiev is understood to have told the Russians in advance that it was sending vessels from Odessa to Mariupol, officials in Moscow insist the voyage was a “pre-planned provocation.”

Still, Russia has been acting increasingly aggressive in this region this year. Russia built a $3.7 billion bridge to connect Russia and Crimea, and Russian naval forces have been hostile to Ukrainian vessels operating in and around that choke point.

“Along with the bridge goes the entry point to the Sea of Azov. If you’re keeping up with this lately, there’s been some irresponsible activity in the Sea of Azov in the last couple months, the Ukrainians are not happy about that. The Russians have delayed shipping, held them at sea, unable to enter port, any port, unable to go to sea. This is costing the Ukraine millions of dollars a year and it’s an unfair practice,” Adm. James Foggo, the head of U.S. Naval Forces Europe, said last month. Foggo explained that NATO forces could not patrol the Sea of Azov to support Ukraine, as those waters only belong to Ukraine and Russia, but NATO and the U.S. could ensure presence in the adjacent Black Sea.

The U.S. Navy and U.S. Department of Defense did not provide comment on this week’s incident.

The incident occurred after the Ukrainian Naval Forces’ Gurza-M class (Project 58155) gunboats Berdyansk (P175) and Nikopol (P176) and the Prometey-class tug Yany Kapu (A947) left the Black Sea port of Odessa early yesterday, en route to Mariupol on the northern shores of the Sea of Azov.

The Ukrainian ships’ passage under the new Crimean Bridge was blocked by a tanker. The tug was rammed by Don, a Russian Federal Border Guard Service Sorum-class (Project 745) ocean-going tug modernized as a patrol vessel.

A video of the incident, filmed from the bridge of the Russian patrol ship, was shared widely on the internet.

According to a transcript published by the Kiev-based UNIAN news agency, a Russian officer is heard shouting: “Faster, come on! Good job! Crush it from the starboard side! Come on, come on! Stop engine, stop engine! Take hold on board! Reverse, reverse!” His instructions are littered with expletives. Another sailor exclaims after the tug is rammed: “That was great!”

Photographs also appeared online showing a Rubin-class vessel, RFCGS Izumrud (354), with a large hole beneath its bridge, although the cause of the damage unclear.

Officials in Kiev said that several other Russian military vessels – including the Grisha-class corvette RFS Suzdalets and unidentified Sobol (Project 12200) and Mangust (Project 12150) patrol craft – had also engaged in “openly aggressive acts against ships of the Ukrainian navy.”

In a statement today, Ukraine’s Ministry of Foreign Affairs said the Kremlin’s “criminal regime” had “de facto expanded its military aggression against Ukraine to the sea,” and demanded that Russia return the captured vessels and personnel and pay compensation for the damage caused.

The ministry added: “Ukraine urges its allies and partners to take all necessary measures to deter the aggressor, i.e. by applying new and strengthening existing sanctions, as well as by providing Ukraine with military assistance to protect its territorial integrity and sovereignty within the internationally recognized borders.”

World leaders have similarly condemned the aggressive actions by Russia and stated support for Ukraine. U.S. Ambassador to the United Nations Nikki Haley said at an emergency meeting of the UN Security Council today, “this is no way for a law-abiding, civilized nation to act. Impeding Ukraine’s lawful transit through the Kerch Strait is a violation under international law. It is an arrogant act that the international community must condemn and will never accept.”

Berdyansk and Nikopol are two of Ukraine’s newest combatants. Constructed at the Kuznya na Rybalskomu shipyard in Kiev and commissioned into service in December 2016 and July 2018 respectively, they are armed with two Katran-M remote-controlled close-in weapon systems (forward and aft, each comprising a 30mm gun and two grenade launchers) and have a maximum speed of about 25 knots.