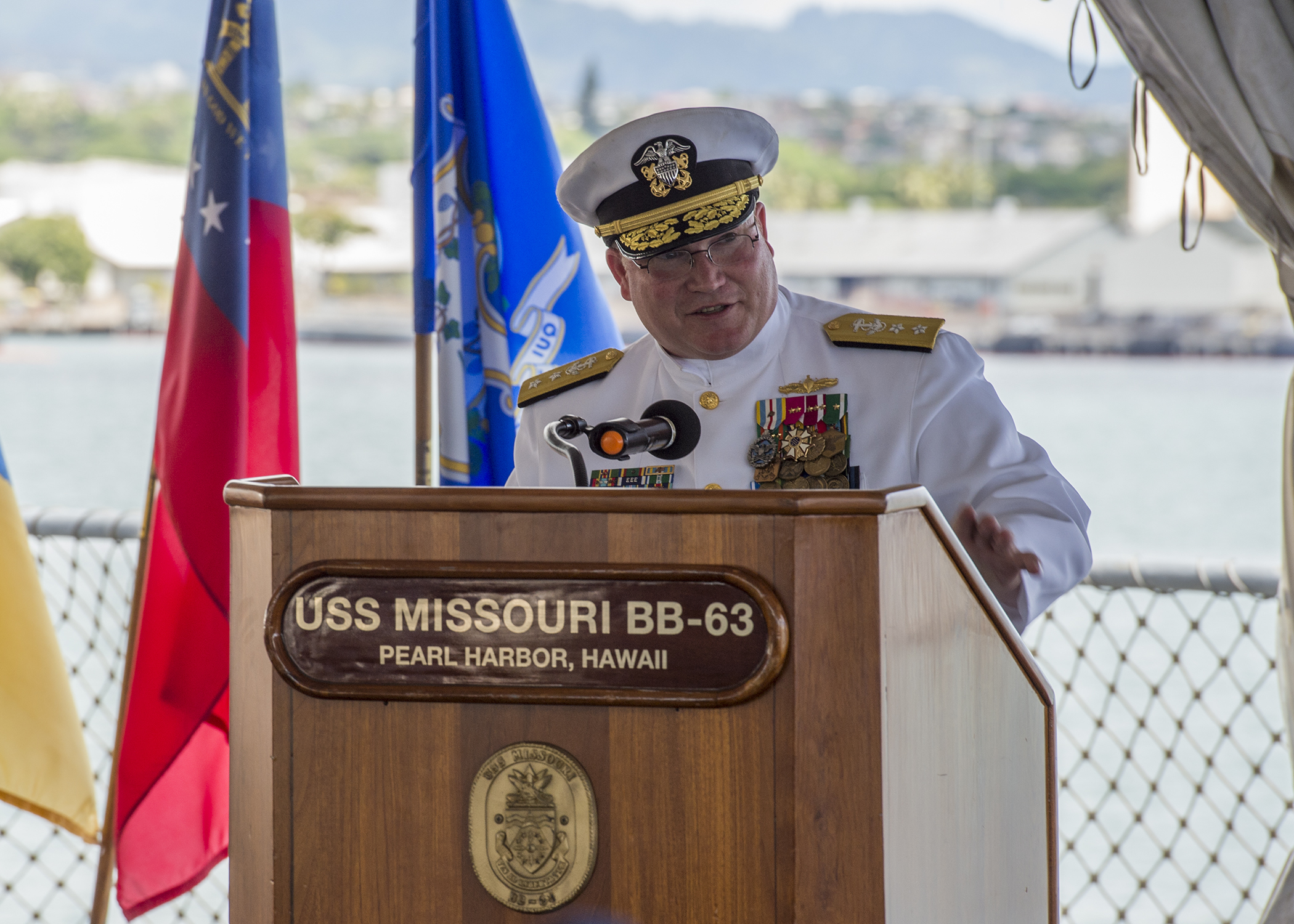 This post has been updated with a redacted copy of the letter of censure.

Navy Secretary Richard V. Spencer censured a now-retired rear admiral for his involvement nearly a decade ago with a defense contractor indicted in a bribery and fraud investigation that’s netted several dozen officials, including flag and commanding officers.

In issuing a Secretarial Letter of Censure, the Navy determined that retired Rear Adm. Mark Montgomery solicited and received bribes of gifts from Leonard Francis, president and chief executive of Singapore-based Glenn Defense Marine Asia, during a tour commanding Destroyer Squadron 15 in Japan from 2007 to 2009, the service announced Monday. Spencer found that Montgomery had “repeatedly and improperly solicited and accepted gifts from Leonard Francis and GDMA, a prohibited source, and during the same period repeatedly and improperly endorsed, provided information to, and took action to financially benefit GDMA,” the Navy said in a statement.

“Moreover, in light of the connections between the gifts RADM (Ret.) Montgomery received and the actions he took, Secretary Spencer determined that he also committed the offense of graft. Finally, Secretary Spencer determined that in 2018, RADM (Ret.) Montgomery made a false official statement intending to mislead the Consolidated Disposition Authority (CDA) for GDMA matters about the nature of his conduct with Leonard Francis and GDMA.”

The Navy didn’t release the full letter of censure and provided no details of Montgomery’s offenses. Montgomery retired in 2017, closing out a 32-year naval career.

The Navy called his actions “a significant deviation from the standards expected of all Naval Officers, particularly those entrusted with command positions.”

“Ethical behavior is a foundation of the Navy’s ability to function, and any officer placed in a position of command must treat our ethical standards with the utmost seriousness. Instead, RADM (Ret.) Montgomery disregarded them, and abused his position to benefit himself,” Spencer said in a statement. “His actions cast a shadow over the reputation of all the outstanding men and women who served during his tenure in command of Destroyer Squadron FIFTEEN.” Montgomery is the sixth flag officer to be censured by the Navy for ethical lapses in connection with the “Fat Leonard” scandal.

Spencer’s decision seems to have derailed Montgomery’s presidential nomination to be the U.S. Agency for International Development’s assistant administrator for the Bureau for Democracy, Conflict and Humanitarian Assistance, The Washington Post reported Monday. 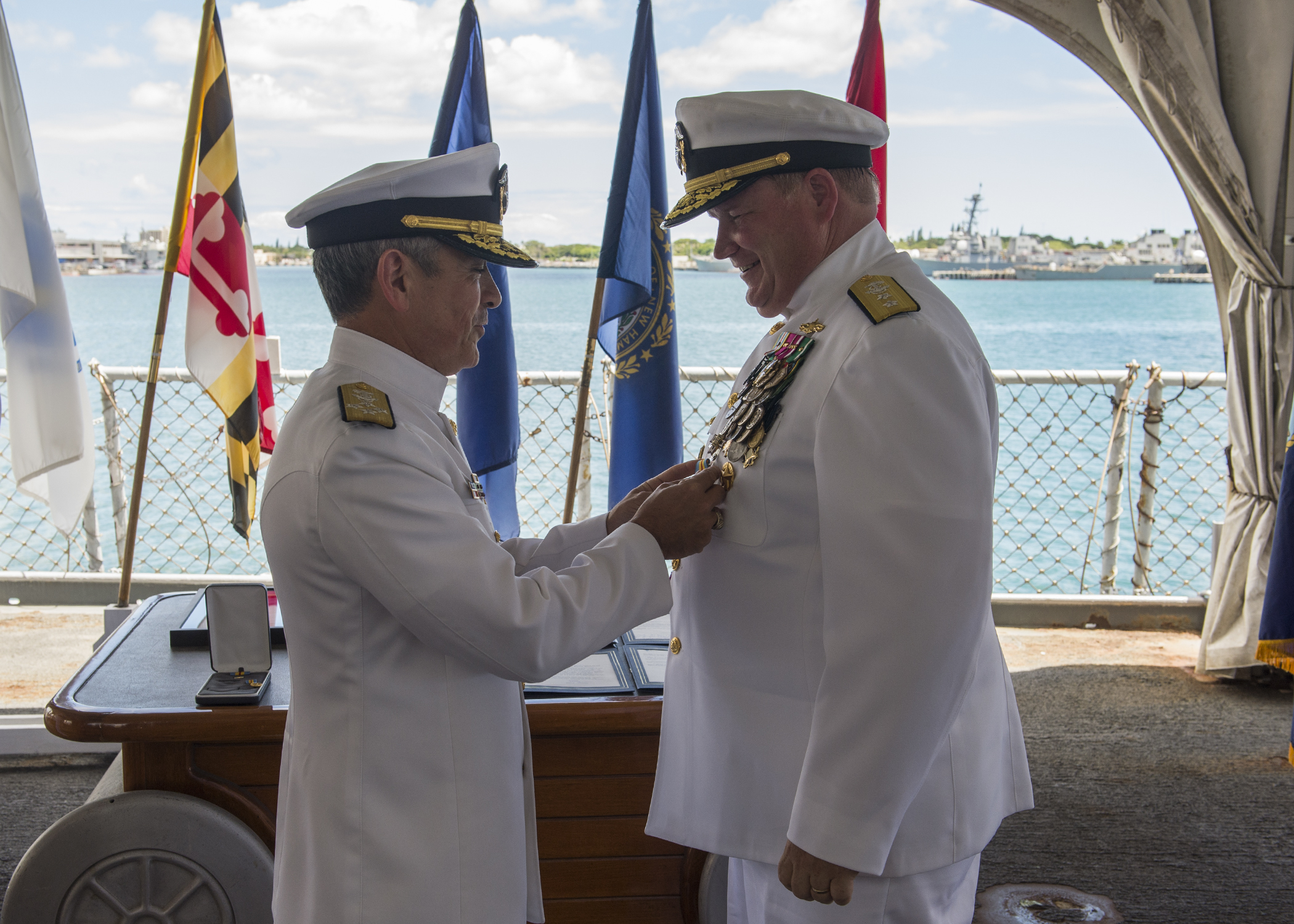 Montgomery’s final command tour was as commander of Japan-based Task Force 70 and CSG-5, from 2013 to 2014. He then relocated to Hawaii to become the director of operations, J-3, for U.S. Pacific Command.
At Montgomery’s retirement ceremony, Adm. Harry Harris, the then-PACOM commander, praised his work as the operations director.

“During provocations from North Korea, he brought real-time coordination and communications with the Japanese and Koreans to a level we’ve never seen here,” the now-retired Harris said during the August 2017 ceremony held aboard the USS Battleship Missouri Memorial in Honolulu, according to a Navy news story.
“It’s no exaggeration to say that his knowledge and understanding of the Indo-Asia-Pacific are unmatched. In fact, one could go so far as to say, he’s a national treasure.”

Montgomery, in the Navy story about the ceremony, spoke about his career experiences.

“My two previous commands at U.S. European Command and command of a Carrier Strike Group – and then here at U.S. Pacific Command – involve a lot of political/military issues. I’ve found that I’m pretty drawn to them,” he said, according to the Navy story.
“I like them, I think I have the opportunity to go more full-time in political/military aspects of the joint force, and I can do that pretty well in a civilian job.”

A month later, Montgomery began work in Washington as a policy director for the Senate Armed Services Committee. He left the position in September, according to his LinkedIn profile.

The “Fat Leonard” scandal involving GDMA, a ship husbanding firm, erupted several years ago. Allegations largely revolve around relationships that Francis culled among Navy officials – from schedulers and logisticians to ship commanders and flag officers – over a decade to steer business to his firm in exchange for gifts that included cash and luxury items such as meals, prostitutes and lush hotel accommodations. Those business exchanges included, at times, the sharing of ships’ schedules including port visits that typically are considered sensitive if not classified information.

At least 22 people have pleaded guilty to various charges in the ongoing federal investigation led by the Department of Justice and the Naval Criminal Investigative Service, and about 33 people have been charged since the start of the corruption investigation by NCIS in 2012.

Montgomery, however, has not been charged in the case, and it is unclear whether any charges are pending. Cindy Cipriani, a spokeswoman for the U.S. attorney’s office in San Diego, which is overseeing the prosecutions in the investigation along with the DOJ’s criminal division in Washington, declined to comment. “We can only talk about what’s in the public record,” Cipriani told USNI News.