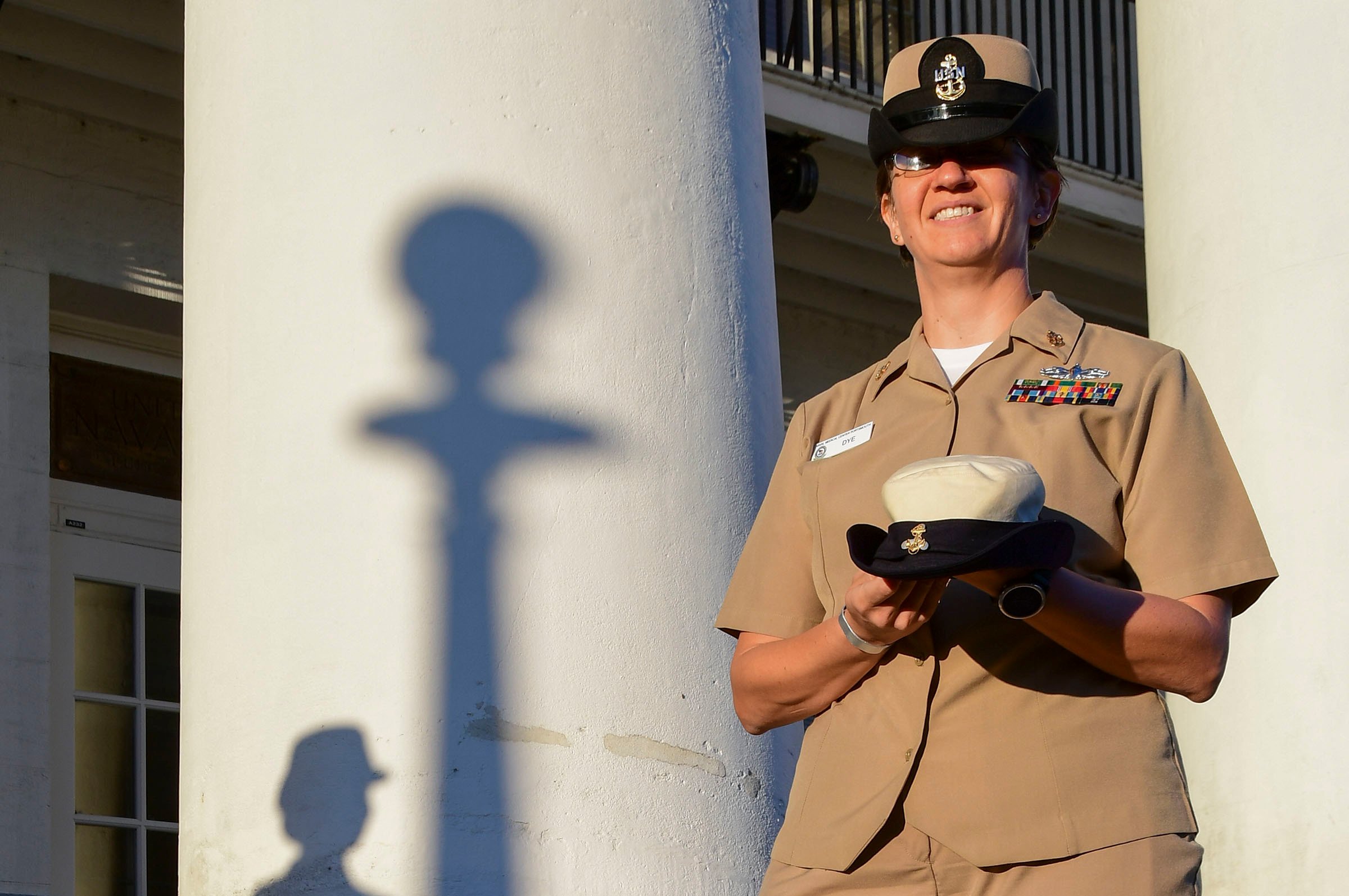 HMC Julie Dye holds her grandmother’s cover. “I think, for me, it’ll always hold a special place in my heart,” she said on Oct. 30, 2018. US Navy Photo

The Navy officially retired the combination – or “bucket” – cover this week, ending the 78-year run for the staple of the female officer and chief petty officer uniform.

Starting Thursday, all female officers and chief petty officers are required to wear what is officially called the unisex combination cover: essentially what is, in appearance and fit, the male cover in use for decades.

An all-female team of officers and chiefs – donning bucket covers – raised colors at Naval Medical Center Portsmouth in Virginia Tuesday, marking the end of an era that started during World War II.

Navy social media was rife with tributes to one of the few noticeable differences between male and female uniforms. Such differences were precisely the reason cited five years ago for changing all female chiefs and officers to the male cover. 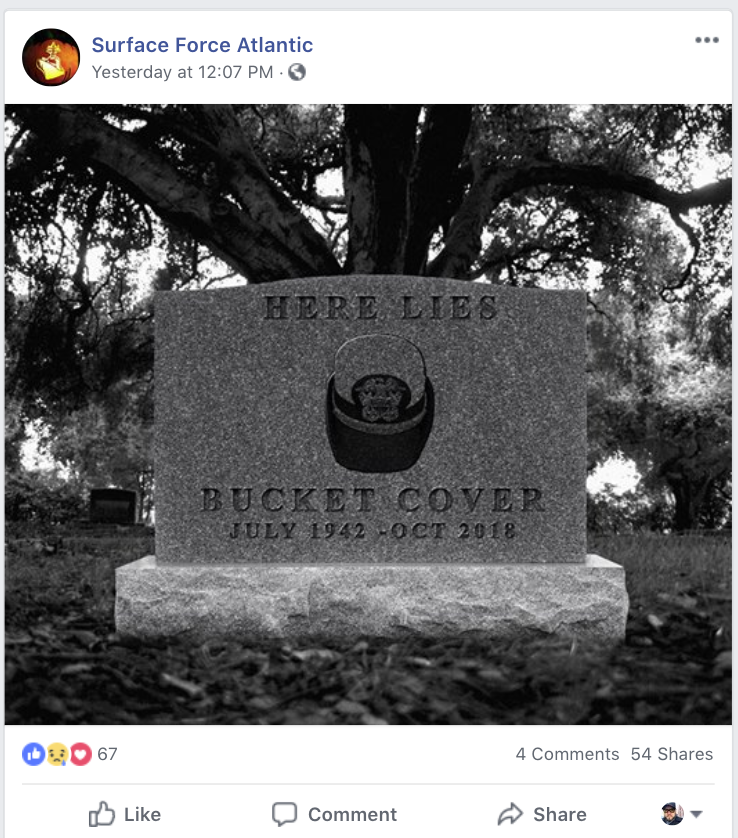 The official Facebook page of Surface Force Atlantic paid homage to the Bucket Cover on its last day.

“These changes ensure greater uniformity in our service and ceremonial dress, but more importantly, they send a clear signal that we are one in dress, one in standard and one in team. As you look out across a group of sailors, you ought to see, not female and male sailors, but sailors,” Ray Mabus, former Secretary of the Navy, said in a 2013 statement the unisex cover’s creation.

Initially, the switch to male-style covers was to occur in November 2016. Almost immediately, the Navy Exchange started phasing bucket covers out from its inventory, Courtney Williams, a Navy Exchange Command spokeswoman, told USNI News. The NEX destroyed any remaining covers by Thursday.

“In comments on social media, questions in captain’s calls, and feedback across the blogosphere, the tide is running against the new cover. Women object to its rapid introduction, the unnecessary cost of replacing serviceable uniform items, and the unfairness of placing the burden for gender neutrality on women,” Cmdr. Kati Hill wrote in the December 2016 issue of Proceedings. 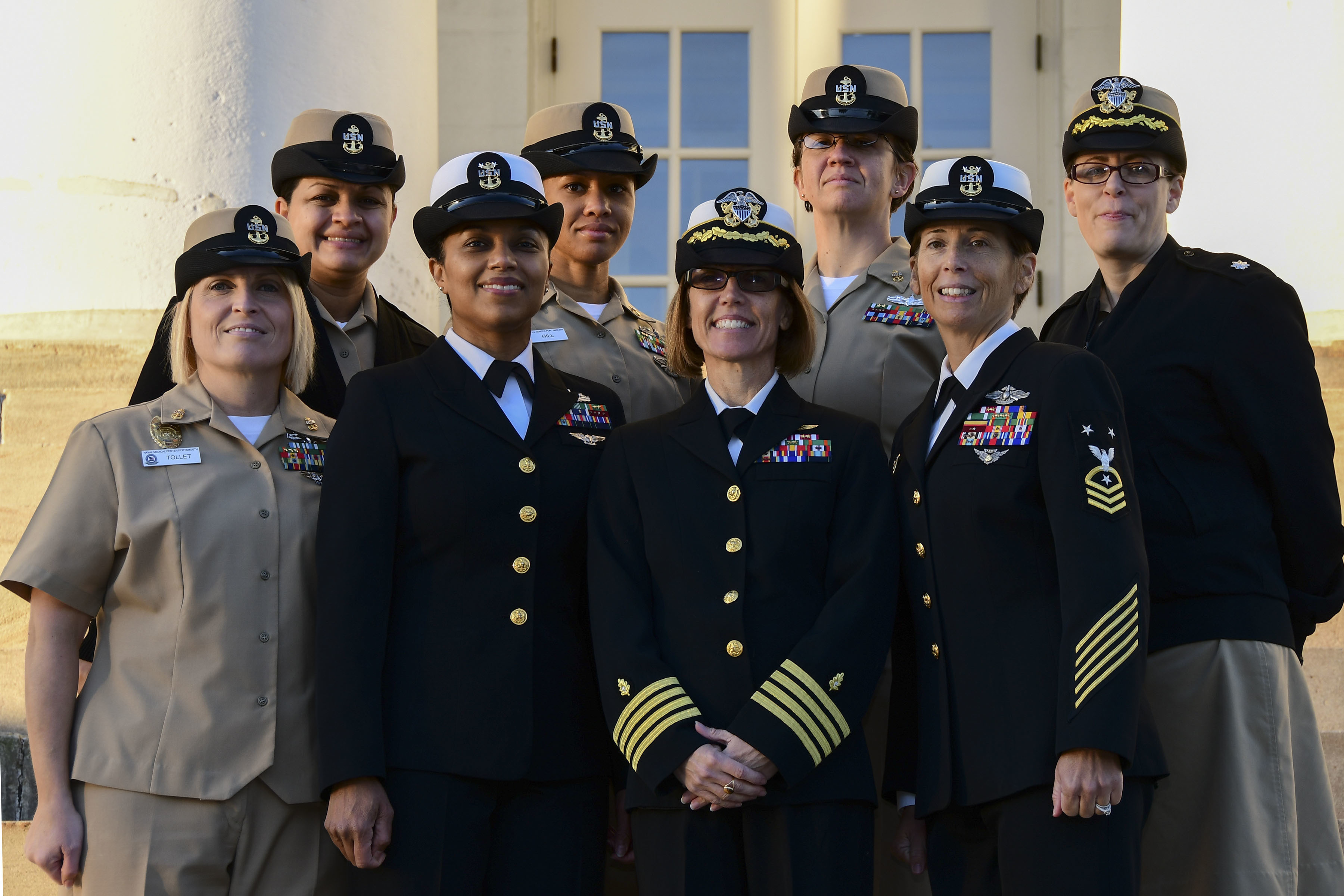 NMCP officers and chief petty officers gather for a group photo wearing their combination or ‘bucket’ covers on Oct. 30, 2018. US Navy Photo

The pushback against a unisex cover, though, was likely about more than cost, Hill wrote. Based on her read of social media comments, Hill suggested female officers worried about losing an important part of their identity.

Bucket covers, worn during ceremonial events, were seen by Hill as a way to help women balance the dilemma of proving competency in a masculine workplace but still retaining femininity.

“By removing the bucket cover from the sea bag, Navy leadership is removing one tool servicewomen may use to navigate the double bind,” Hill wrote.