The Navy’s next class fast attack submarine will be designed for a return to blue-water great power competition, where the ability to support forces ashore is less important than operating in the open ocean hunting rival submarines, according to an analysis of the Navy’s 30 Year shipbuilding plan conducted by Congressional Budget Office (CBO).

The Navy plans to start purchasing this new class of submarine in 2034. Previously the SSN(X) class were assumed to be a successor to the current Virginia-class submarine, complete with the Virginia Payload Module (VPM) – a vertical launch system that increases the number of Tomahawk-sized weapons from 12 to 40 – and other acoustic and technological design improvements, according to the CBO analysis released Thursday.

“Specifically, the Navy indicates that the next-generation attack submarine should be faster, stealthier, and able to carry more torpedoes than the Virginia class—similar to the Seawolf class submarine,” the CBO report states.

In the post-Cold War period, SSNs were still expected to be submarine hunters, but the force was increasingly called on to carry out covert intelligence, surveillance, and reconnaissance (ISR) missions, along with secretly inserting or recovering special operations forces, according to a July Congressional Research Service report by Ronald O’Rourke released in July.

“In light of the recent shift in the strategic environment from the post-Cold War era to a new situation featuring renewed great power competition that some observers conclude has occurred, Anti Submarine Warfare (ASW) against Russian and Chinese submarines may once again become a more prominent mission for U.S. Navy SSNs,” O’Rourke wrote in July.

With this new mission – one less focused on the ability to launch weapons against ground targets – the CBO now assumes the SSN(X) will be similar in size to the Seawolf-class, which displaces about 9,100 tons. Using this size, the CBO estimates building the new Seawolf-class type of submarine will cost about $5.5 billion per sub. In contrast, the Navy’s shipbuilding plan estimates SSN(X) production will run about $3.1 billion per sub.

Previous 30-year shipbuilding plans suggested updated Virginia-class would become the SSN(X). An increased ability to launch unmanned underwater vehicles (UUVs) would supplement VPM capability. There was talk of the SSN(X) including a new design feature focused on launching UUVs.

“There has to be a better way to design this submarine from the ground up to seamlessly employ UUVs,” then-Program Executive Officer for Submarines Rear Adm. Michael Jabaley said at the 2016 Naval Submarine League symposium.

While it is unclear whether the new SSN(X) design will incorporate UUVs, the CBO analysis of the Navy’s shipbuilding plans suggests such missions might be carried out by a new large-diameter, next-generation payload-based submarine – something to be ordered in 2036 after the Columbia-class winds down.

For the first time, the 2019 shipbuilding plan includes a proposal to purchase five of these post-Columbia-class submarines. The Navy has not released a lot of details about these subs, but the CBO assumes they will resemble the Columbia-class design. USNI News first reported the plans for a SSGN-like Columbia-follow-on in November 2017. 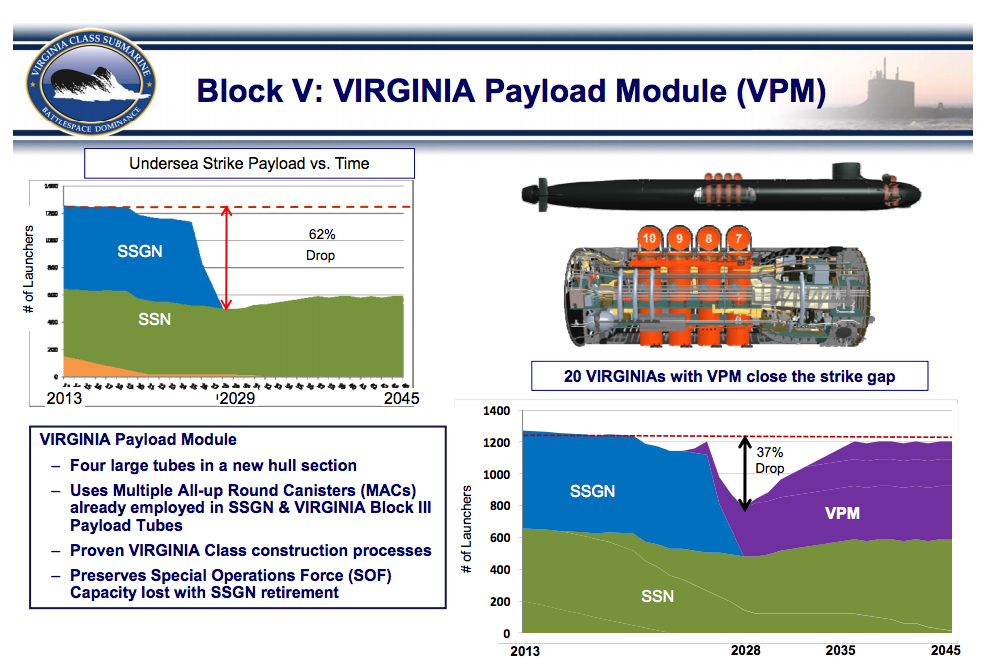 “The ship would be capable of performing missions similar to those currently conducted by SSGNs (cruise missile submarines) and, in the future, by Virginia-class ships with the Virginia payload module (VPM), as well as other missions,” the CBO states.

Building the SSN(X) as the CBO envisions will not be cheap, and the CBO does not consider the Navy’s shipbuilding plan to properly plan for its expense. To create a 355-ship fleet, the Navy claims it needs an annual shipbuilding budget of $21 billion through 2048; the CBO analysis of the Navy plan says spending $28.9 billion-per-year is a more realistic estimate. Funding the SSN(X) program accounts for about 40 percent of the difference between the Navy and CBO projected shipbuilding budget needs.

“That amount ($28.9 billion) is 80 percent greater than the average annual funding the Navy has received over the past three decades,” the CBO report says, comparing its estimated spending with the Navy’s estimate.

Plus, the Navy’s ship-purchasing schedule does not keep pace with the rate it plans to retire ships during the next 30 years, the CBO report states.

A plan to extend to 45-years the life of all Arleigh Burke-class guided-missile destroyers would result in a 355-ship navy, but the CBO points out result might not be a fleet the Navy wants.

“With those service life extensions, the fleet would reach 355 ships in 2034 but would fall short of the Navy’s specific goals for some types of ships,” the CBO reports states.