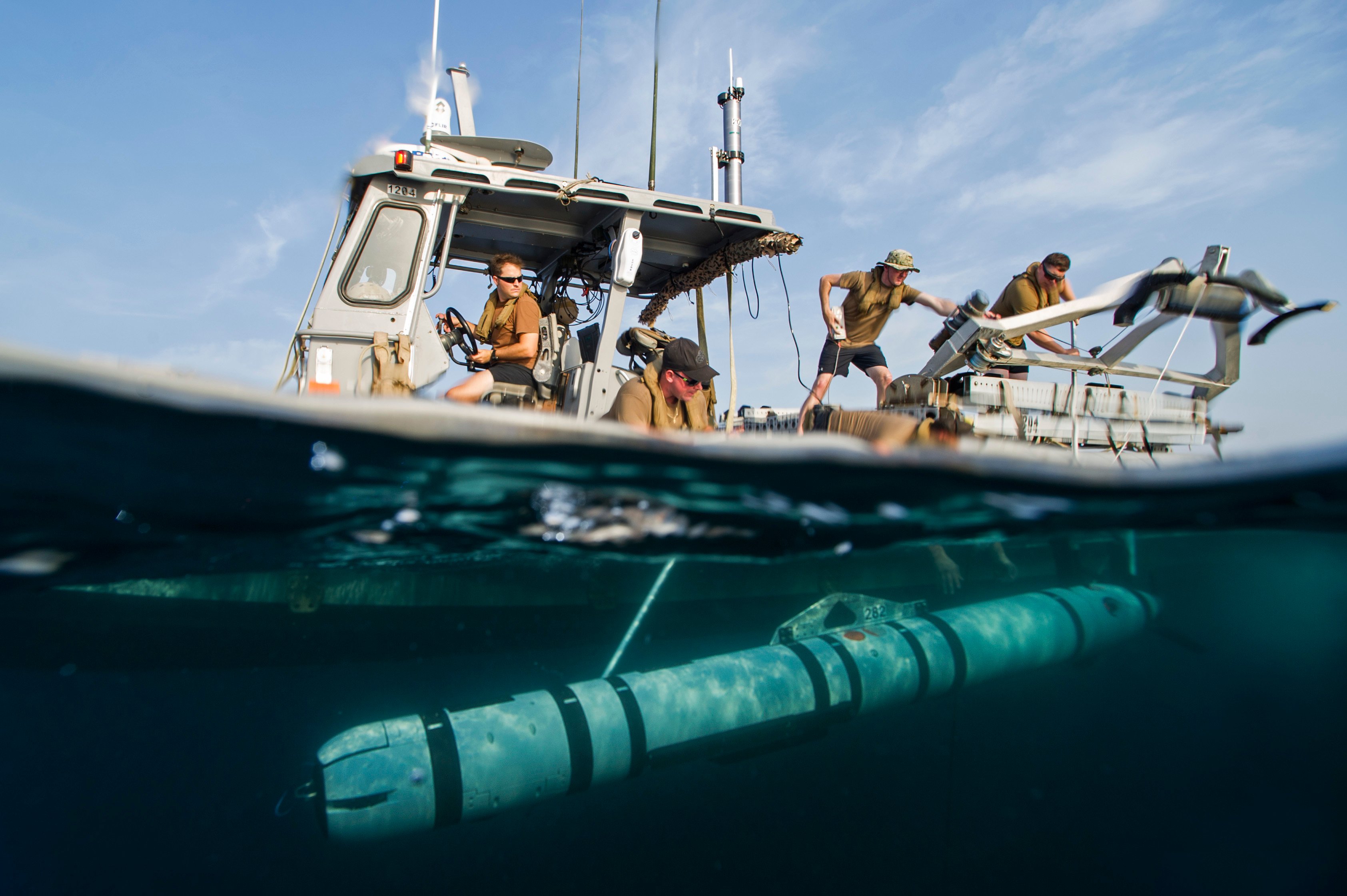 Crew members from Task Group 56.1 launch a MK 18 MOD 2 Kingfish unmanned underwater vehicle from a rigid-hull inflatable boat during Squadex 2016, on Aug. 2, 2016, in the Persian Gulf. Squadex 2016 demonstrates U.S./U.K. mine detection capabilities in the U.S. 5th Fleet area of operations. US Navy photo.

The Navy submarine community is pushing hard to make progress on unmanned underwater vehicle development and operations, which lag behind unmanned aerial vehicles, through prototype testing and the creation of a UUV squadron.

Rear Adm. William Merz, who recently took over as the service’s director of undersea warfare (OPNAV N97) said Oct. 27 at the Naval Submarine League’s annual symposium that the submarine community currently gets more use out of unmanned aerial vehicles, which are more technologically mature and easier to operate, and he wants to see UUVs catch up.

“I’m tired of waiting,” he said.
“Give me what you have, I will take it to sea, I will give you feedback and you can continue to develop and evolve, and then I’ll take that to sea and give you more feedback.”

He noted the Mk 18 Mod 2 Kingfish UUV was brought to the Middle East in 2012 and used by a team of developers and U.S. 5th Fleet sailors to conduct real missions.

“We think we pretty much skipped a whole generation of testing, evaluation and development” thanks to the rapid fielding approach, Merz said.

Commander of U.S. Submarine Force Pacific Rear Adm. Fritz Roegge said at the same conference that in 2019 the Navy would stand up its first UUV Squadron, which will be subordinate to Submarine Development Squadron 5. He said that, as new types of UUVs come online, the UUVRON would be responsible for learning to man, train and equip operational UUV units and developing UUV operational concepts

This rapid learning effort with unmanned vehicles will actually be important in shaping the next manned submarine. Program Executive Officer for Submarines Rear Adm. Michael Jabaley said Oct. 26 at the symposium that current plans for the Virginia-class attack submarine call for two more blocks of new capabilities –Blocks VI and VII – before transitioning to an SSN(X). It is too early to know what SSN(X) will look like, he said, but the future platform will be required to “seamlessly integrate, deploy and employ unmanned vehicles.”

The Navy expects to buy its first SSN(X) in 2034, which means an analysis of alternatives to select a material solution to meet the warfighting requirement would happen in the early- to mid-2020s, he said. Ahead of that AoA, the Navy needs to learn everything it can about UUVs, multi-domain unmanned vehicles such as those that can be launched from undersea and then fly through the air, and unmanned vehicle support systems like the Forward-Deployed Energy-Charging Outpost (FDECO) that UUVs could connect to and recharge mid-mission. While Merz is encouraging industry to send him solutions that could be fielded and tested today, Jabaley said he was soliciting any idea, no matter how crazy, for future submarine-based unmanned systems.

“We have for years used any available interface on the submarine to get the UUV off the ship, whether it was torpedo tubes, 3-inch launcher, trash disposal unit – we have to get beyond that, there has to be a better way to design this submarine from the ground up to seamlessly employ UUVs,” Jabaley said.
“And I’m talking transformational stuff – I testified before Congress earlier this year, I said, you know, it’s like the remora, that little suckerfish that attaches itself to the shark or the whale as it goes along; maybe that’s the answer. Maybe there’s some way to figure that out.”

The rear admiral said he wanted to engage industry, academia and Navy labs in the hopes of “finding those really weird ideas that everybody says, ‘well that’ll never happen.’ Yeah, but maybe there’s a part of it that can. Maybe that part you can pair with a part over here, and before you know it you have something useful.”

Jabaley said there had been talk of extending the Virginia-class program a bit longer, adding in a Block VIII instead of moving into SSN(X) in the 2030s. He said that option was still on the table but stressed that his PEO is “aggressively approaching the SSN(X) because the need for this type of platform is significant.”