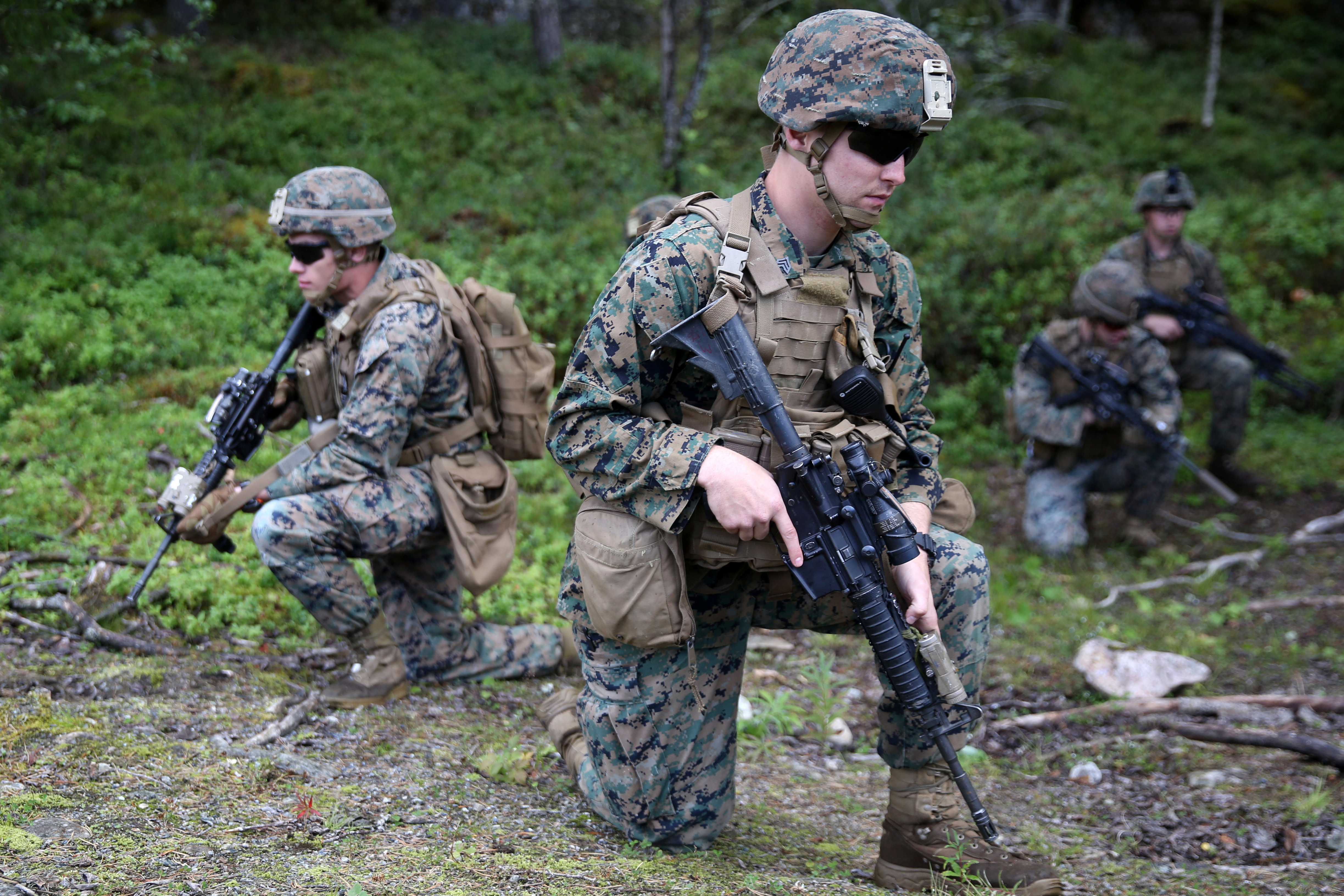 Marines with Marine Rotational Force-Europe 18.1 prepare to bound across a road during a live-fire range at Giskas, Norway, Aug. 21, 2018. US Marine Corps Photo

THE PENTAGON – The upcoming Trident Juncture 2018 exercise will be the first opportunity to test out the premise of NATO’s new “Four Thirties” initiative – the idea that NATO may need to move a lot of people and platforms quickly to defend an ally whose sovereignty has been violated – the head of naval forces in Europe said today.

Adm. James Foggo, who heads all U.S. naval forces in Europe and Africa and commands the Allied Joint Force Command in Naples, said today that there are still details to work out surrounding Four Thirties, but that “we’re exercising it in spirit in Trident Juncture.”

Four Thirties is the idea that NATO should have 30 ships, 30 squadrons of aircraft and 30 combat battalions that could be ready to fight within 30 days, an initiative that Defense Secretary James Mattis pushed at the July NATO Summit.

Trident Juncture, which starts later this month, will seek to move and support 45,000 personnel, 60 ships, 120 aircraft and 10,000 ground vehicles in a simulated defense of Norway against an invading adversary.

“We’re really testing our response to an Article 5 (defense of an ally under the NATO treaty), our ability to move rapidly – the Very High Readiness Joint Task Force will move into Norway to provide Article 5 defense. And, even more importantly, we’re testing our ability to conduct operations in the 6th domain of warfare, and that is logistics, which is so important – when you have 45,000 soldiers, sailors, airmen and Marines and all their kit, you’ve got to get there. So that’s several lifts of aircraft, several [roll-on/roll-off ships] or sealift ships that are coming in,” he said while speaking at an Atlantic Council event in the morning.

Without mentioning Russia by name, Foggo said, “we’re going to move all this kit quickly up into Norway, and I think that has a sobering deterrent effect on any adversary that might choose to cross a line and try to take a territory.”

Later in the day, speaking to reporters in the Pentagon, Foggo again reiterated the importance of demonstrating the ability to move and support such a large force.

“We’re going to test several different things, but probably most importantly is – as much fun as we’re going to have on the ground doing the training that Marines and soldiers and sailors and airmen like to do to get their kit out, to operate their equipment, to work with their allies and partners – this is a logistics exercise. I call it the sixth domain of warfare. Moving 45,000 people and 10,000 vehicles and 60-some-odd ships and 120 aircraft around the theater is not easy, so this is a test of our ability to do that rapidly,” he said.
“We do this well in the United States joint force, we have something called a … Time Phased Force [Deployment]. NATO is developing this same capability to move quickly, and that is a good thing because it’s recognized as something we’re going to have to do. In order to deter, you have to be present. In order to be present, you’ve got to be there – you’ve got to be there, and you’ve got to be there quickly.”

Foggo said the Marines currently have about 700 Marines operating out of Norway, an increase from the 300 Marines that were originally sent to conduct cold-weather training there. The admiral recalled a press event with Sergeant Major of the Marine Corps Ronald Green, when the 300 Marines first showed up in Norway. Someone asked what good such a small force could do, and Green replied, “that’s 300 Marines today. 3,000 Marines tomorrow,” according to Foggo. Foggo added that the U.S. joint force is good at quickly surging troops and gear to a fight, and NATO is trying to emulate that capability through exercises like Trident Juncture and through its embrace of the Four Thirties idea.

Foggo said at the Atlantic Council that many details still had to be worked out – including basics such as, what kinds of ships should make up the 30 that are ready to fight? He noted the importance of variety: the ships should include combatants but also specialty ships, such as mine countermeasures ships, that have niche capabilities a larger response force may rely on. He also highlighted the need for sufficient intelligence, surveillance and reconnaissance (ISR) to enable the movement of ships and planes into battle.