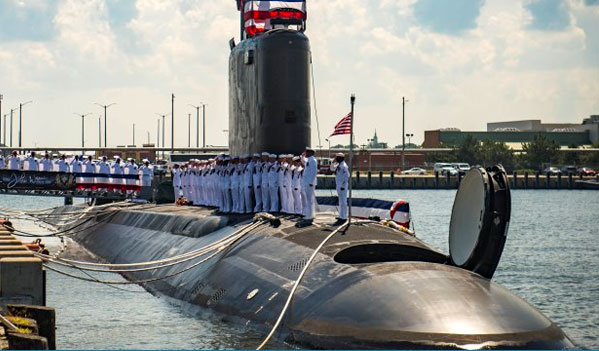 South Dakota is the 17th Virginia-class submarine built and is the seventh of eight Block III submarines. The final Block III boat, the future Delaware (SSN-791), will be delivered by Newport News Shipbuilding, which has a teaming arrangement with Electric Boat where they each build separate portions of the submarine and then trade off which company delivers the final product to the Navy.

“South Dakota’s delivery is an important milestone,” Capt. Chris Hanson, Virginia Class Program manager, said in a statement. “It marks the penultimate Block III delivery and will be a vital asset in the hands of the fleet.”

“Delivering South Dakota is a significant achievement that represents the hard work and excellent performance of our shipbuilders, helps the Navy meet its shipbuilding goals and contributes to the nation’s defense,” Jeffrey Geiger, Electric Boat president, said in a statement.

Electric Boat is already building the Block IV Virginia-class submarines, and during the second quarter of this year, the Navy awarded General Dynamics $225 million to purchase long-lead materials for the Block V submarines, according to company statements previously reported by USNI News.