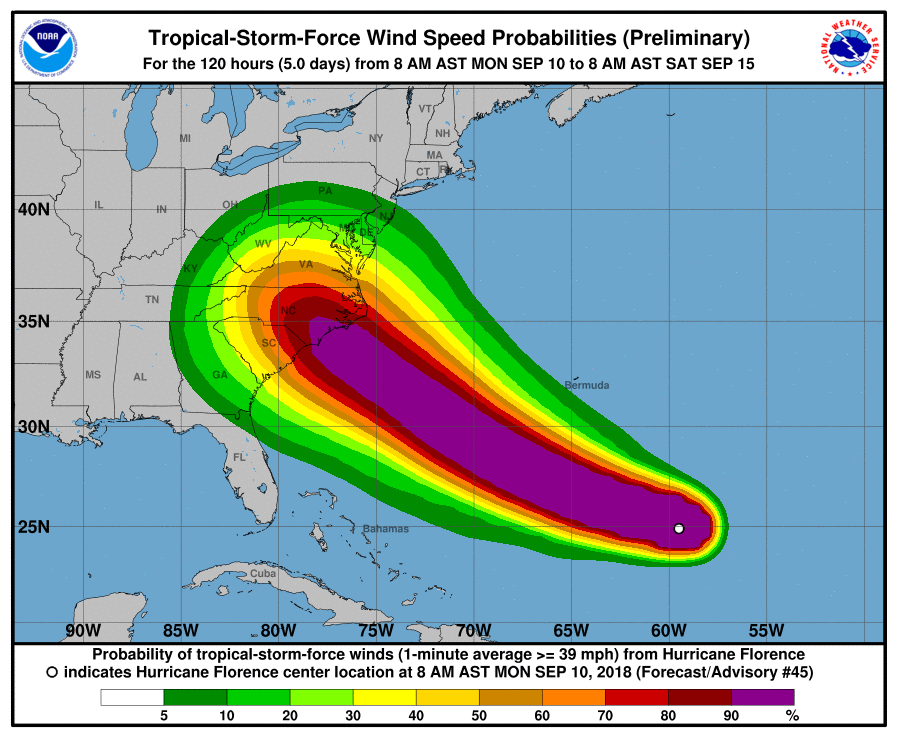 The Navy will send out nearly 30 ships to escape the effects of Hurricane Florence from its bases in Hampton Roads, Va. U.S. Fleet Forces announced on Monday.

Ships from Naval Station Norfolk and Joint Expeditionary Base Little Creek are completing final preparations to leave later this afternoon.

“Ships will be directed to areas of the Atlantic where they will be best postured for storm avoidance,” read the statement. “Some units will not get underway due to maintenance status but will be taking extra precautions to avoid potential damage. Commanding officers have a number of options when staying in port, depending on the severity of the weather. Some of these options include adding additional mooring and storm lines, dropping the anchor, and disconnecting shore power cables.”

Hurricane Florence is strengthening at sea and by tonight is expected to be classified as a major hurricane, with winds of more than 110 mph, according to the National Hurricane Center. An accurate prediction of where the storm is most likely to make landfall will not be possible until later in the week, but the National Hurricane Center is warning residents from South Carolina to the Mid-Atlantic states to now start preparing for the storm.

“Florence is expected to become a strong Category 4 hurricane — nearly a Category 5 — just prior to landfall somewhere on the Southeast or Mid-Atlantic Coast on Thursday night,” reported The Washington Post on Monday.

The U.S. Coast Guard also started pre-staging assets along the coast, from South Carolina to the Hampton Roads-region, over the weekend in anticipation of needing to quickly respond after landfall, according to Coast Guard news releases. The Coast Guard assists with rescue operations and with reopening ports closed due to debris and damaged navigation aids.

Even if the storm makes landfall further south than Hampton Roads, the National Hurricane Center warns the effects of the storm could be felt hundreds of miles away. The Hampton Roads area could start experiencing tropical storm force winds as early as late Wednesday night, according to predictions made Sunday evening by the National Hurricane Center.

The state of Virginia declared a state of emergency for the region Sunday. The Virginia Department of Emergency Management (VDEM) also issued a warning to residents via social media to prepare for the storm.

“Current forecast models indicate that Florence could strike the Carolinas and enter Central Virginia. possibly stalling and dropping more than 20 inches of rain in some areas. This will lead to widespread and dangerous flooding, inundation of roads and damaging infrastructure. Potential widespread power outages are also expected,” the VDEM statement said.

Officials also specifically warned residents of coastal regions to be prepared to evacuate.

“For coastal Virginia, some models are indicating a possible strike more directly on the Hampton Roads region. If this track becomes a reality. Coastal Virginians can expect signiﬁcant flooding, damaging winds and storm surge ﬂooding throughout the region. This track would require the Commonwealth to enact its tiered evacuation plan,” VDEM the statement continued.

The following is the complete Monday statement from U.S. Fleet Forces.

There are nearly 30 ships preparing to get underway from Naval Station Norfolk and Joint Expeditionary Base Little Creek as Hurricane Florence is forecasted to bring high winds and rain to the Mid-Atlantic coast. Ships will be directed to areas of the Atlantic where they will be best postured for storm avoidance.

Some units will not get underway due to maintenance status but will be taking extra precautions to avoid potential damage. Commanding officers have a number of options when staying in port, depending on the severity of the weather. Some of these options include adding additional mooring and storm lines, dropping the anchor, and disconnecting shore power cables.

“Our ships can better weather storms of this magnitude when they are underway,” said U.S. Fleet Forces Commander Adm. Christopher Grady in a news release earlier this weekend.

The number one mission is to protect the fleet, to include keeping our personnel and their families safe.

Navy installations in Hampton Roads have begun to prepare for the storm. Some preparations include securing hazards throughout the installations, removing debris from drainage areas, designating alternate parking areas for flood prone areas, sand bagging flood prone areas, topping off fuel in generators and government vehicles and relocating dumpsters and equipment to more secure areas.

All personnel and their families should review their Navy Family Accountability and Assessment System (NFAAS) account at https://navyfamily.navy.mil, as well as review hurricane checklists and evacuation plans in the event an evacuation is necessary. Service members are encouraged to discuss evacuation and reporting requirements with their chain of command and family members.