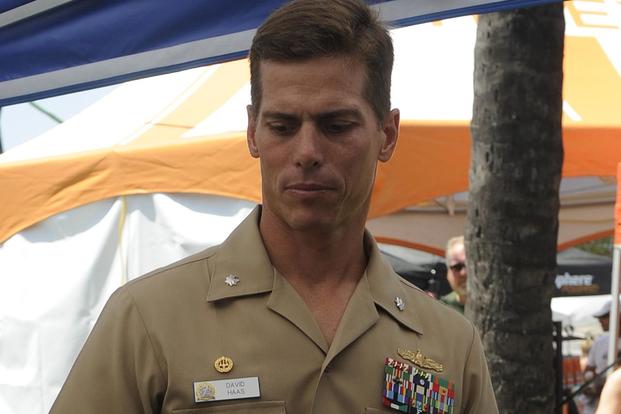 A retired captain and former 7th Fleet official pocketed at least $145,000 in exchange for steering Navy ships to ports where a foreign defense contractor managed port husbanding services, a federal grand jury alleged in an indictment issued Friday in San Diego in the latest in the ongoing probe into Glenn Defense Marine Asia.

Capt. David W. Haas, 50, of Kailua, Hawaii, was charged with eight counts, including bribery, conspiracy to commit bribery and conspiracy to commit ‘honest services’ fraud for allegedly accepting money, luxurious travel, hotel accommodations and food as well as prostitutes’ services from Leonard Francis, GDMA’s owner and chief executive, according to an announcement by the U.S. Attorney for the Southern District of California.

Parks, 46, of Naples, Italy, is accused of “providing sensitive and proprietary U.S. Navy information, including competitor pricing and U.S. Navy ship and personnel movement information, among others,” in exchange for receiving gifts, lavish hotel suites and airline tickets from Francis.

The men face potential prison sentences and $250,000 fines if convicted on any of the charges.

“The trio reciprocated by using their influence within the Navy’s Seventh Fleet to approve inflated invoices by GDMA, to steer ships to GDMA-controlled ports and otherwise advance the interests of Francis and GDMA,” U.S. Attorney Adam L. Braverman said in the announcement. “The indictment further alleges that they and their co-conspirators used their access to slip GDMA classified and proprietary U.S. Navy information, and helped GDMA recruit other U.S. Navy officers to join the conspiracy.”

From May 11-15, 2012, “Francis paid for rooms at the Shangri-La in Jakarta, Indonesia, plus dinner, entertainment at a nightclub, alcohol and prostitutes for Haas and others.”

From June 29-30, 2012, in Tokyo, “Francis paid for a two-day party for Haas and others including transportation, dinner at Nobu Restaurant and entertainment at several hostess clubs where the services of prostitutes were provided, at a cost of more than $75,000.”

The indictment also alleges that on Nov. 30, 2012, Haas joined his alleged co-conspirator, Cmdr. Michael Misiewicz, in a Francis-paid car and driver to take them from Yokosuka to the Ritz-Carlton in Tokyo, where Francis was staying at the time.

David, who retired in May 2012, allegedly collected about $40,000 in cash as he conspired to commit fraud with Francis starting in 2005, according to the eight-page indictment. The CPO served aboard amphibious assault ship USS Essex (LHD-2) from July 2004 to August 2007, aircraft carrier USS Kitty Hawk (CV-63) from September 2007 to August 2008 and the aircraft carrier USS George Washington (CVN-73) from September 2008 to July 2010. “In these positions, DAVID was responsible for ordering and 27 verifying goods and services for the ships on which he served, including 28 from contractors during port calls,” the indictment states.

The document outlined a scheme where David demanded from Francis things “including cash, gifts, entertainment, hotel expenses and the services of prostitutes,” while in return, “David would use his position and influence in the U.S. Navy to advocate for and advance GDMA’s interests, as opportunities arose.”

David is accused of approving or helping approve inflated, fraudulent invoices and giving Francis and others sensitive and classified Navy information, and he pocketed cash and favors including pricey hotel suites. The indictment notes several email exchanges David had with Francis asking for cash, including one where he wrote, “if you can please help me out with some ($cash) I really need some help to build my retirement home.”

Parks, who retired in January 2016, served as a logistics lead petty officer on the 7th Fleet staff from December 2005 to November 2008, then was assigned to the Afloat Training Group-Western Pacific until May 2013.

In one 2006 email exchange to a GDMA executive asking for a hotel suite for his vacation, “Parks wrote: ‘It feels good living like a KING on an E-6’s salary!!!’” the indictment states.

Haas, David and Parks are scheduled to be arraigned at 10:30 a.m. on Aug. 30, in San Diego, according to their summons posted on the court’s website.